Worldwide consumer spending in mobile apps reached $64.9 billion across the App Store and Google Play in the first half of 2021, according to preliminary Sensor Tower Store Intelligence estimates and projections through June 30. This was 24.8 percent more than the $52 billion generated by both stores in the same period in 2020.

Apple's App Store is projected to generate $41.5 billion in consumer spending globally from in-app purchases, subscriptions, and premium apps and games in the first half of 2021. This is about 1.8 times the revenue generated by Google Play, which saw an estimated $23.4 billion in the same period.

However, Google's marketplace is projected to experience more Y/Y growth than Apple's. In the first half of 2021, the App Store has grown 22.1 percent from about $34 billion in the H1 2020, a little more than 7 percentage points lower than the 29.3 percent growth experienced during 1H20 due to accelerated spending during the onset of the COVID-19 pandemic.

Google Play's revenue in H1 2021 has grown 30 percent from $18 billion in 1H20, more than 4 percentage points higher than the 26.8 percent growth experienced last year when compared to the same period in 2019. The outsized Y/Y revenue growth on Google's marketplace is being driven by markets such as the Philippines, where COVID-19 has resulted in continuing business closures and quarantines. 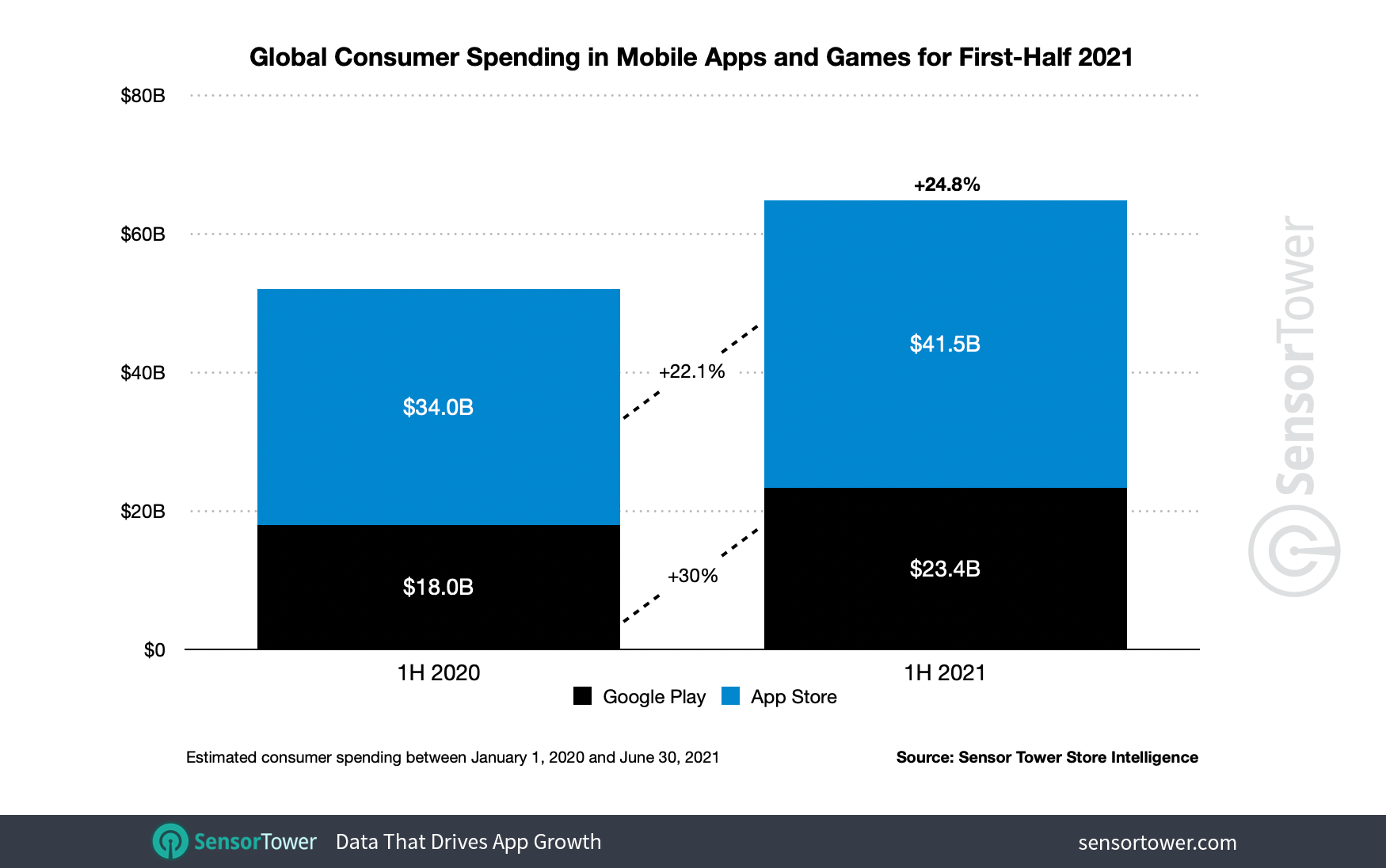 TikTok topped revenue charts in 2020 and continued to do so in 1H21 as the highest grossing non-game app worldwide across both the App Store and Google Play, when including Douyin on iOS in China. Consumers are projected to have spent more than $920 million in TikTok during the first half of the year, up 74 percent when compared to the year-ago period.

YouTube maintained its spot as the second highest grossing non-game app, with an estimated consumer spend of $564.7 million. Perennial top earner Tinder ranked No. 3 with an estimated revenue of approximately $520.3 million, while Japanese comic reader Piccoma and Disney's streaming platform Disney+ sat at No. 4 and No. 5, respectively. 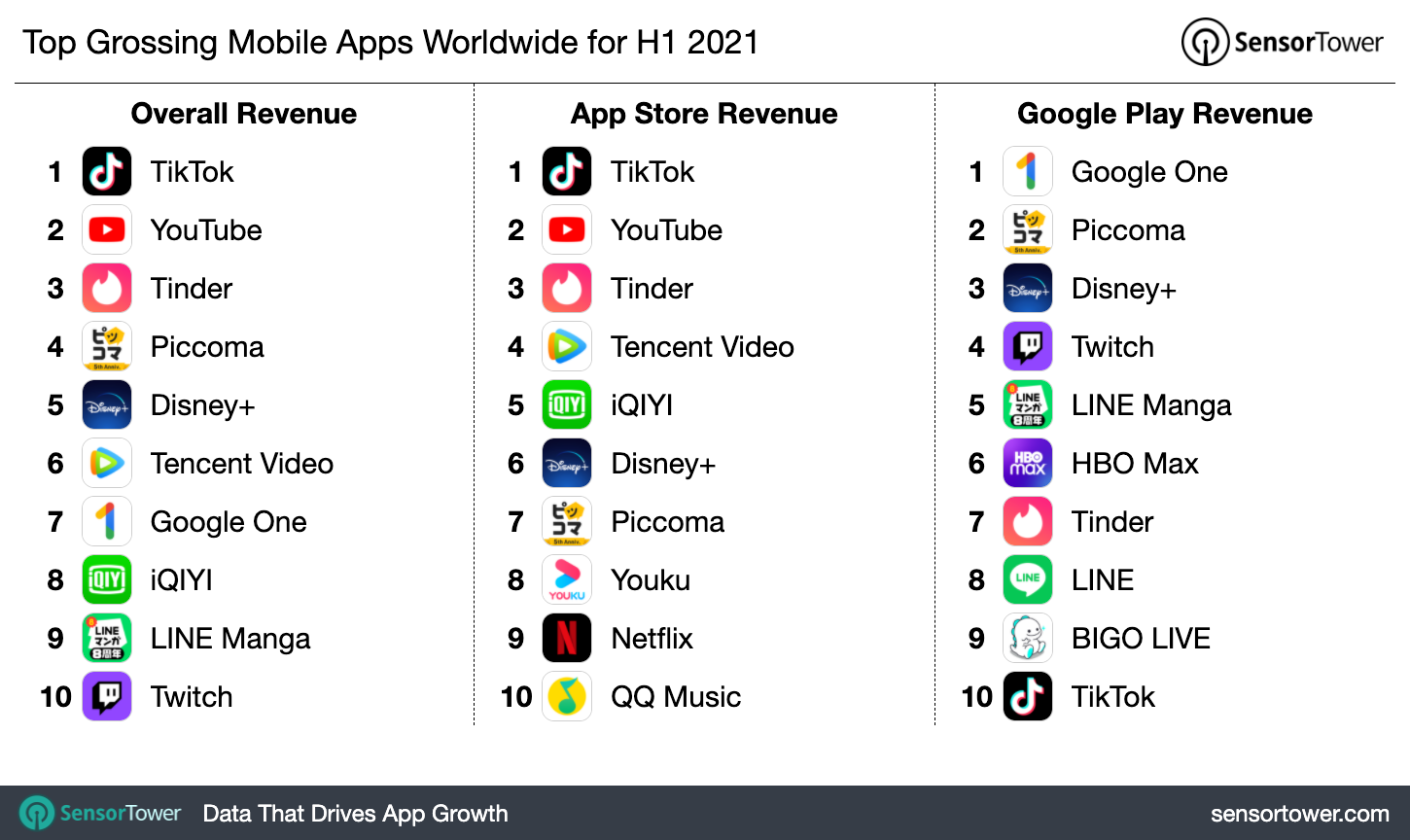 After the surge in adoption last year driven by COVID-19's impact on consumer behavior, app install growth was slight in the first half of 2021. There were an estimated 72.5 billion downloads globally across both stores in 1H21, up 1.7 percent from 71.3 billion during the year-ago period. This trails the explosive 25.7 percent Y/Y growth experienced by app adoption last year when compared to H1 2019.

Apple's App Store saw a Y/Y decline in installs in the first half of 2021, dropping 10.9 percent to 16.3 billion from 18.3 billion in 1H20. This indicates that there's potentially more competition for consumer attention in markets with high concentrations of iOS users, such as the United States, which have begun to reopen businesses and in-person spaces. 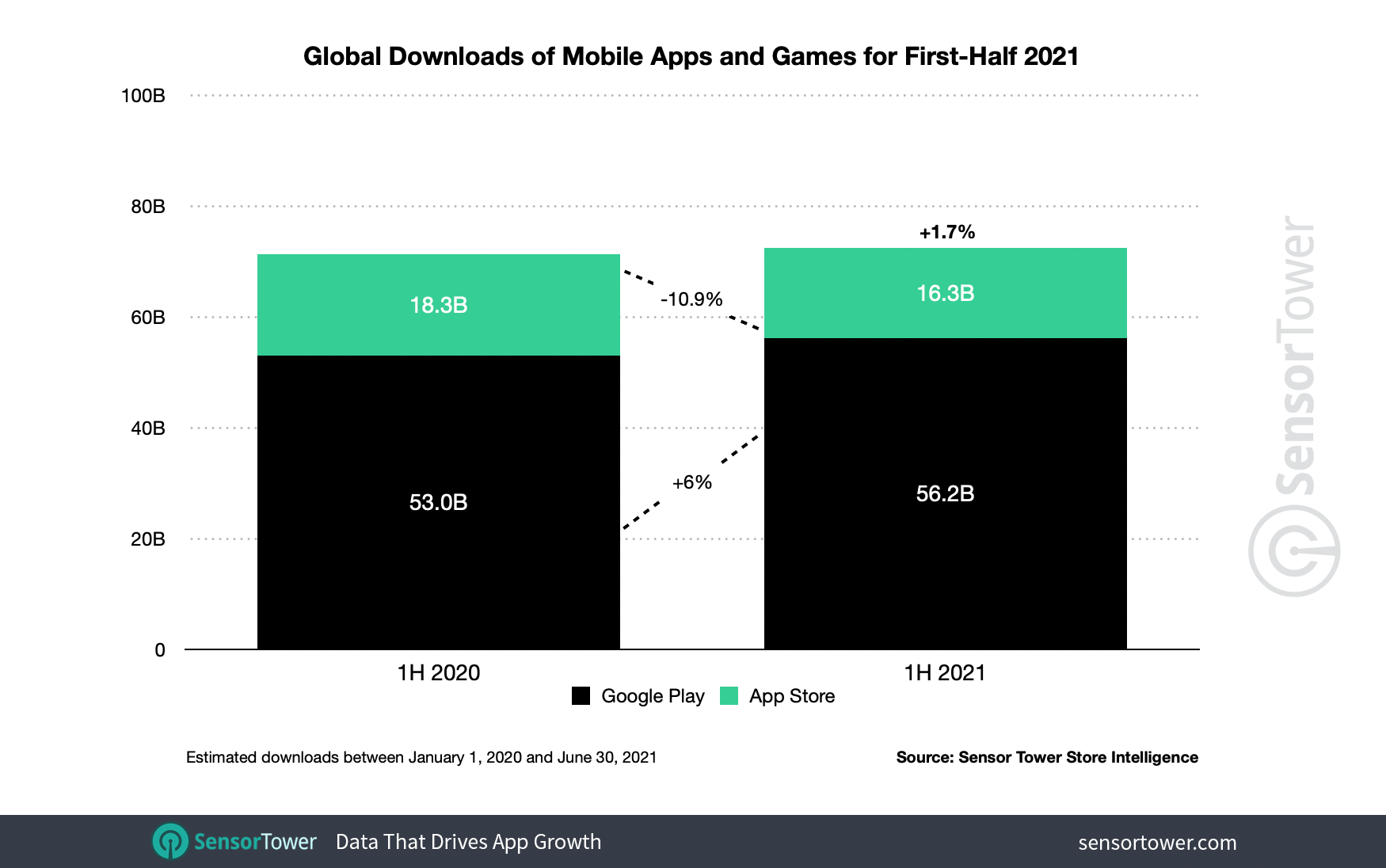 First-time installs on Google Play climbed 6 percent Y/Y to 56.2 billion in 1H21 from 53 billion in the year-ago period, perhaps tied to the prevalence of Android devices in markets that are still heavily affected by the pandemic, such as India. In the first half of this year, app adoption on Google's marketplace was nearly 3.5 times higher than that seen on Apple's store. 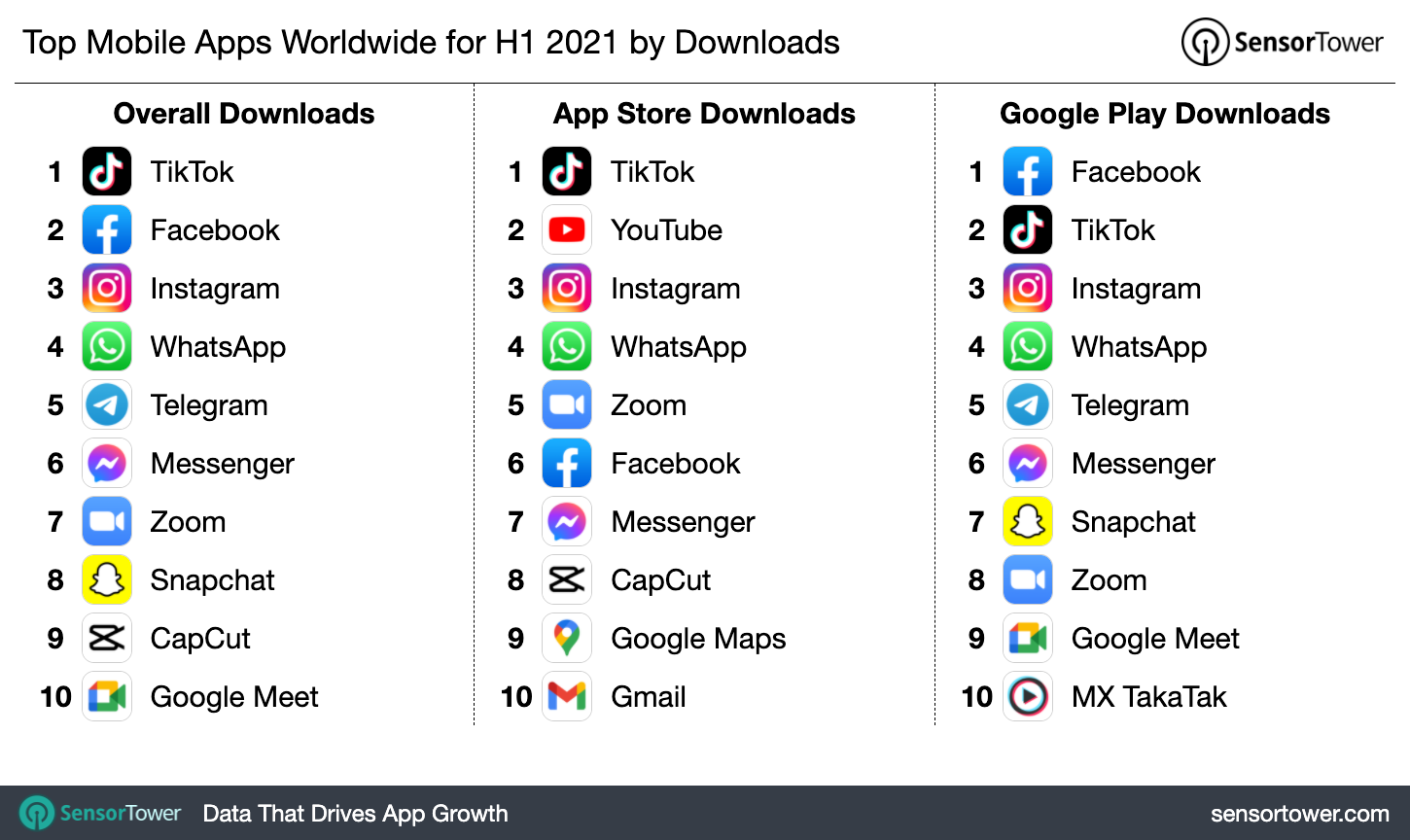 TikTok saw record-breaking adoption last year alongside its revenue leadership among non-game apps, and its popularity has persisted into 2021. In the first half of the year, the app saw the most downloads worldwide across both app stores, reaching about 384.6 million. Although this is down about 38 percent Y/Y compared to nearly 619 million downloads in the first half of 2020, that discrepancy is due to the app no longer being available in markets such as India.

The rest of the top five most-downloaded non-game apps were shuffled from the year-ago period due to a shift in consumer priorities as parts of the world began to re-open. Facebook dominated most of the other slots with its main Facebook app and Instagram taking the No. 2 and No. 3 spots, respectively. Although WhatsApp encountered backlash earlier this year over privacy concerns, it still placed No. 4. The same situation that plagued WhatsApp also boosted Telegram to the No. 5 spot. Video conferencing platform Zoom ranked at No. 7, four positions lower than its No. 3 placement in the first half of 2020.

Although Google Play's marketplace didn't generate as much mobile gaming revenue as Apple's, it maintained the same Y/Y growth as seen in the first half of 2020, climbing 24.7 percent to $18.7 billion from $15 billion in the year-ago period. While consumer spending in mobile games is growing at a slower clip than last year, this doesn't indicate a downturn for the industry but rather a normalization after the surge in interest during the extraordinary circumstances of the COVID-19 pandemic. 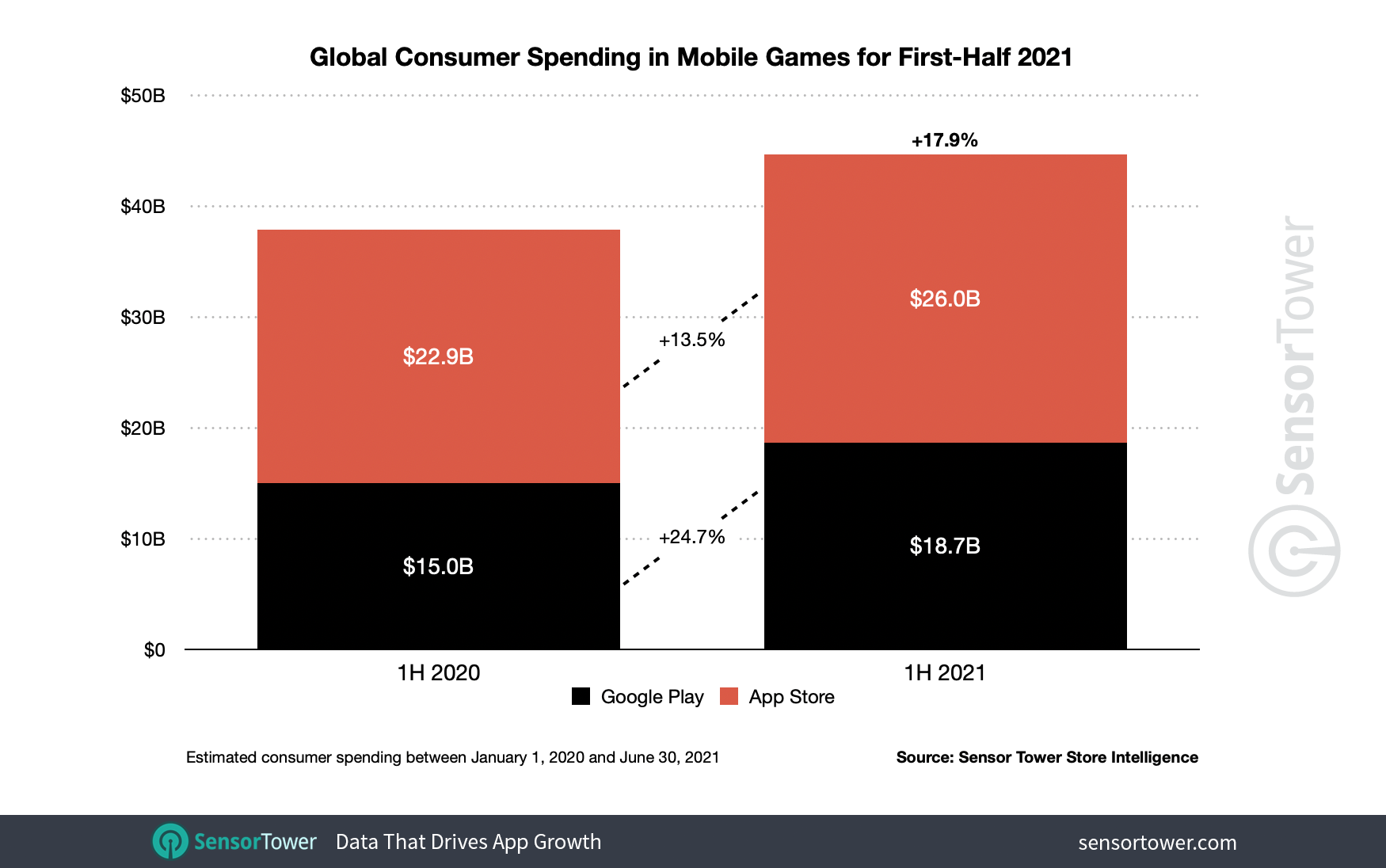 Unsurprisingly, Chinese tech giant Tencent continued its reign at the top of the highest grossing mobile game chart. Honor of Kings reclaimed its No. 1 spot after sliding to No. 2 in 1H20, and it generated more than $1.5 billion in the first half of 2021 alone. Close on its heels, PUBG Mobile—which includes Tencent's localized version of the title for China, Game for Peace/Peacekeeper Elite—approached $1.5 billion in consumer spending as well at the No. 2 position. The mobile battle royale generated an average of $7.4 million each day last year, crossing the $5 billion mark in March. These figures are inclusive of App Store and Google Play spending only and do not reflect revenue from third-party Android stores in China and elsewhere. 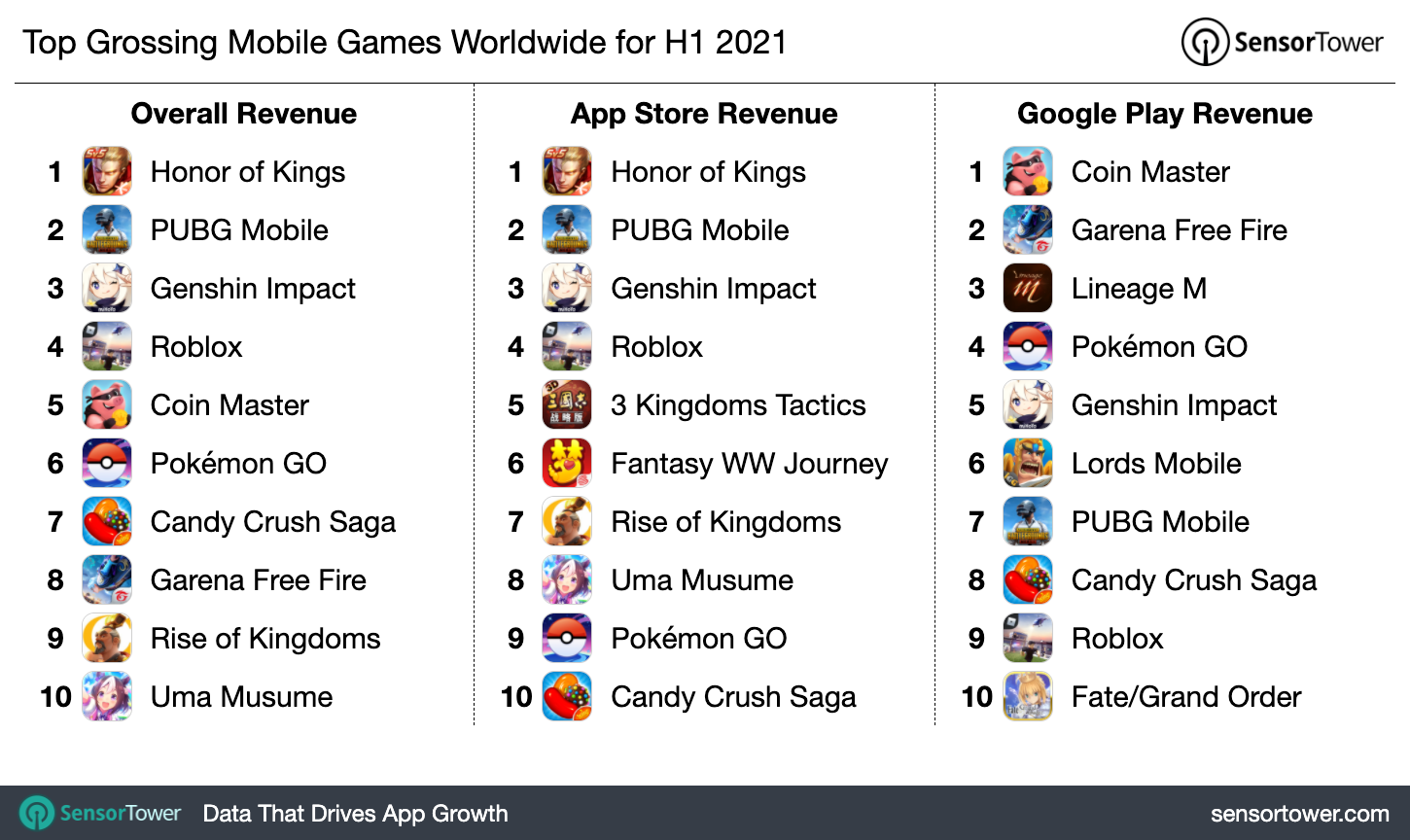 MiHoYo's blockbuster hit Genshin Impact, which passed $1 billion in its first six months, ranked at No. 3 in 1H21 with more than $848 million in consumer spending. Roblox Corporation's Roblox and Moon Active's Coin Master rounded out the top five grossing mobile games at No. 4 and No. 5, respectively. 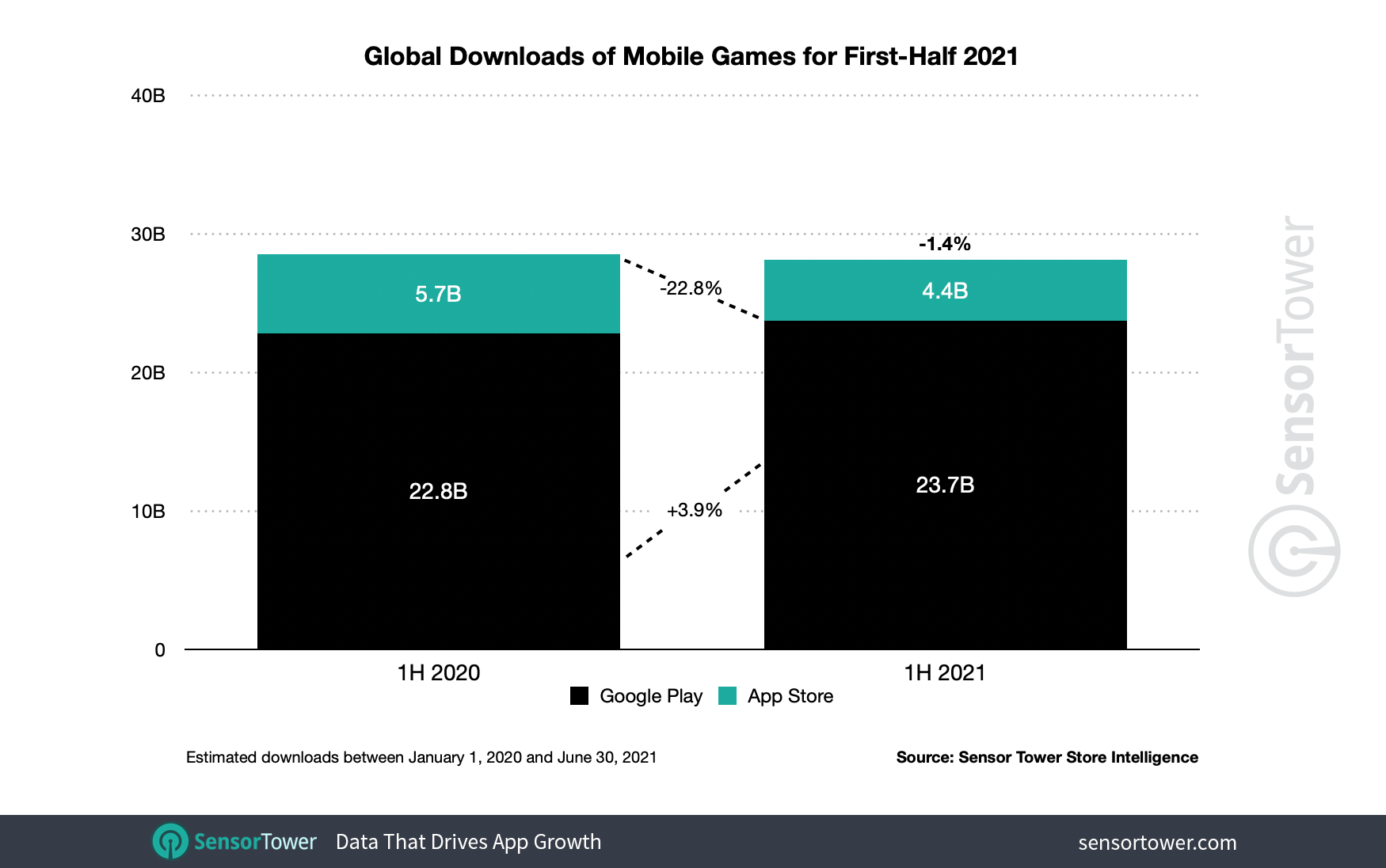 Mobile game adoption saw a slight decline in the first half of 2021, falling 1.4 percent to 28.1 billion installs globally from 28.5 billion in the year-ago period. This is unsurprising as mobile games witnessed an enormous surge in interest in 2020 due to consumers following stay-at-home orders and turning to their mobile devices for entertainment. With the pandemic subsiding in many markets, that demand is still elevated over the pre-COVID period, but has decreased.

New mobile game downloads on Apple's App Store fell 22.8 percent Y/Y to 4.4 billion in 1H21 from 5.7 billion in 1H20. However, first-time installs were still on the rise on Google's marketplace, which grew 3.9 percent to 23.7 billion in 1H21. This trailed the Y/Y growth experienced on the platform in 1H20 when mobile game installs climbed 46.2 percent to 22.8 billion from approximately 15.6 billion in 1H19. Similar to non-game apps, this may be attributed to the widespread usage of Android devices in markets that are still heavily impacted by the COVID-19 pandemic. 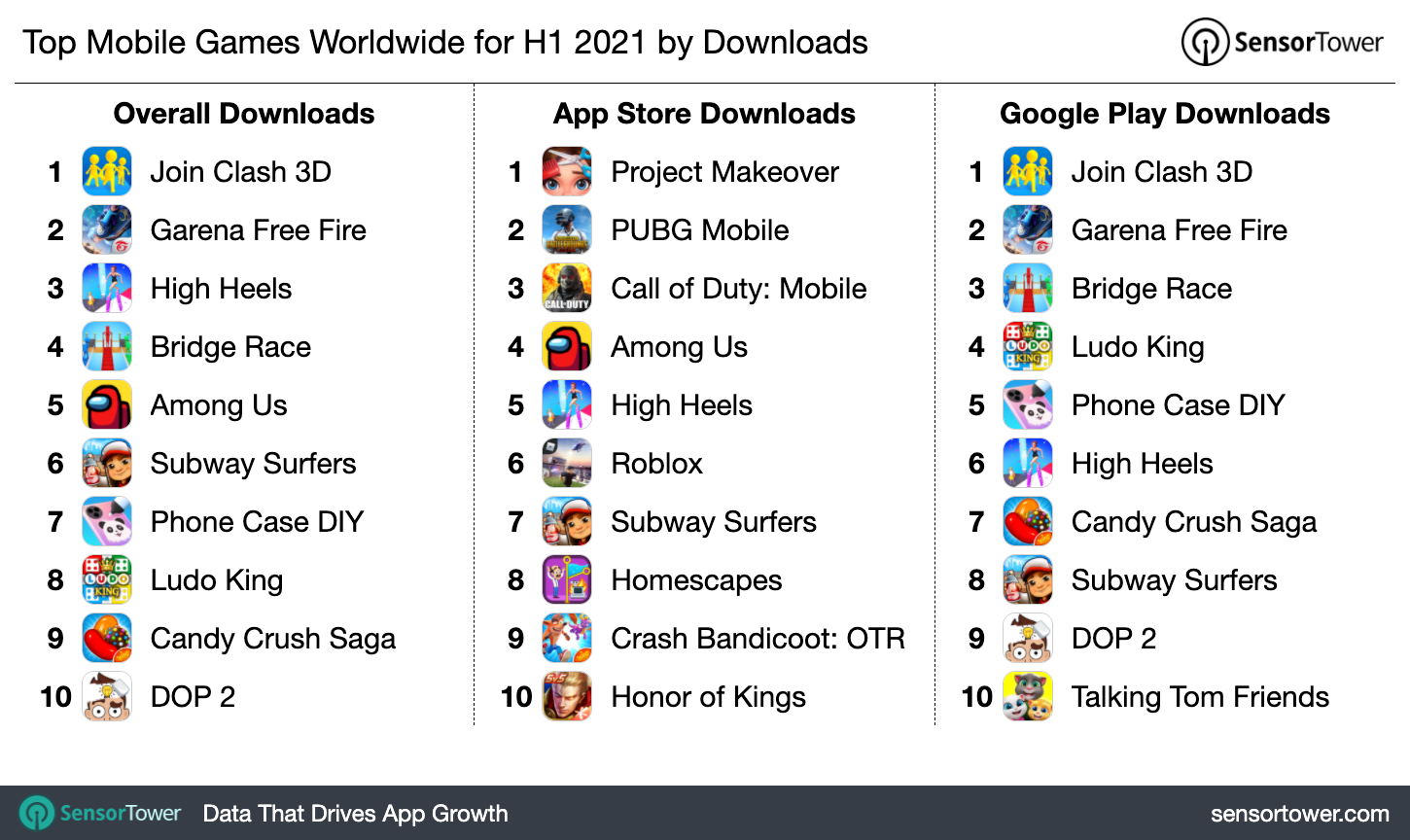 With the exception of Garena Free Fire, the top five most-downloaded games across Apple's and Google's marketplaces were casual titles. Supersonic Studios' Join Clash 3D took the No. 1 spot with 115.6 million downloads globally in 1H21. Garena International's mobile battle royale hit approximately 101.6 million first-time installs in the first half of the year, earning it the No. 2 rank. Zynga's newest offering High Heels ranked at No. 3, and Supersonic Studios made another appearance in the top five with Bridge Race at No. 4. InnerSloth's party game Among Us, which became a surprise hit last year, was the No. 5 most downloaded mobile game in the first half of the year.

So far in 2021, Book category apps have passed a new milestone in worldwide consumer spending. The category generated $1.1 billion in gross revenue from January 1 to June 23, the first time it has ever passed $1 billion in spending in a half. This was up 58 percent when compared to the $720 million earned in the first half of 2020.

As revealed in Sensor Tower's State of Streaming Apps report, Sports category apps saw a resurgence in the first quarter of the year. Year-to-date, sports apps experienced the most Y/Y growth in consumer spending of any category, climbing 65 percent to $491 million, from $298 million in 1H20.

In terms of the highest spending among non-game apps, the Entertainment category took the top spot with $4.4 billion, up 49 percent from 1H20. 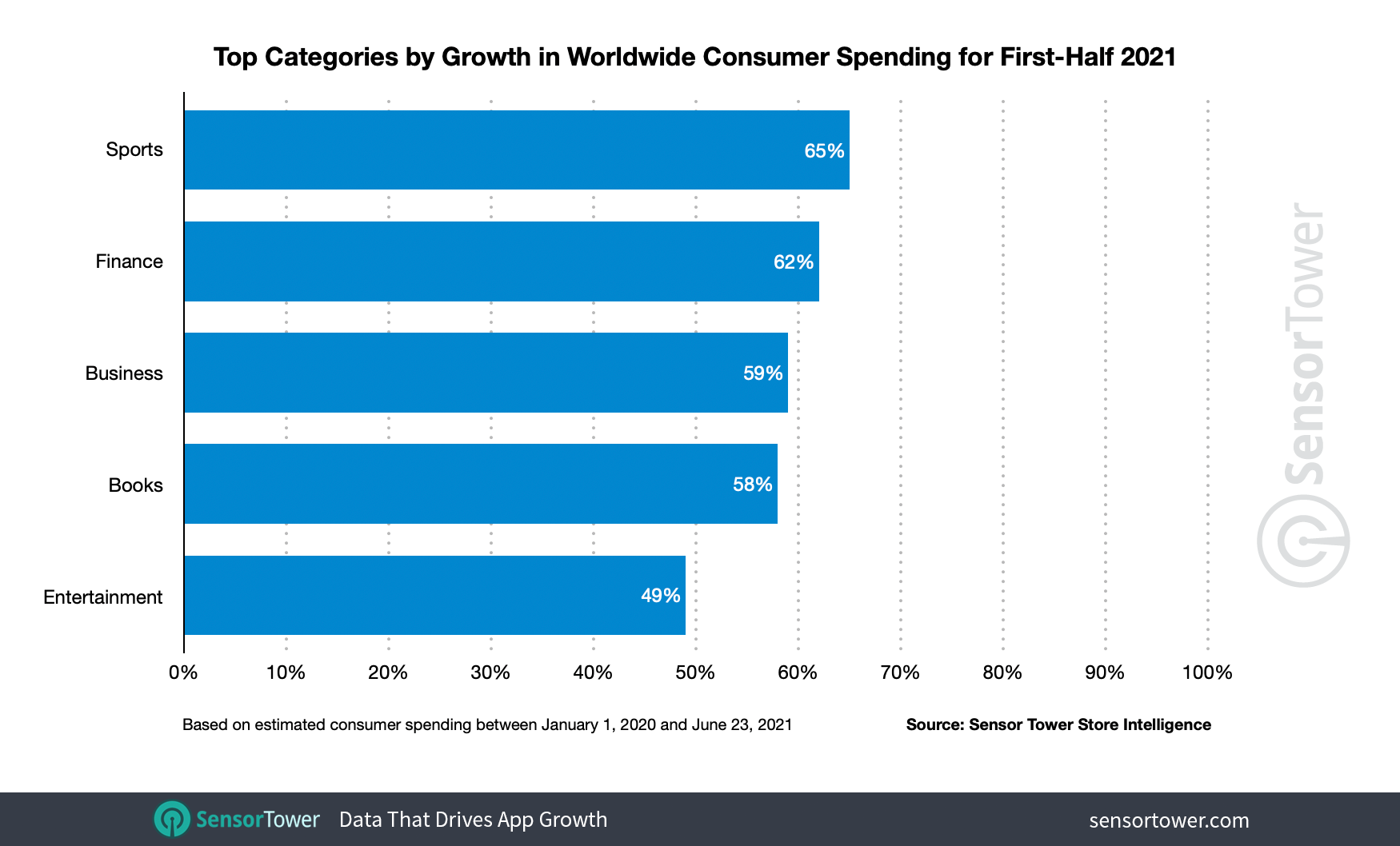 Among the most-downloaded categories, Weather experienced the most growth, climbing 80 percent to 382.3 million from nearly 213 million in 1H20. This category was led by apps such as Weather & Radar. The increase in adoption for these types of apps might be due to both consumers leaving the house for the first time after prolonged social distancing—as well as the severe weather that has impacted many regions throughout the world. 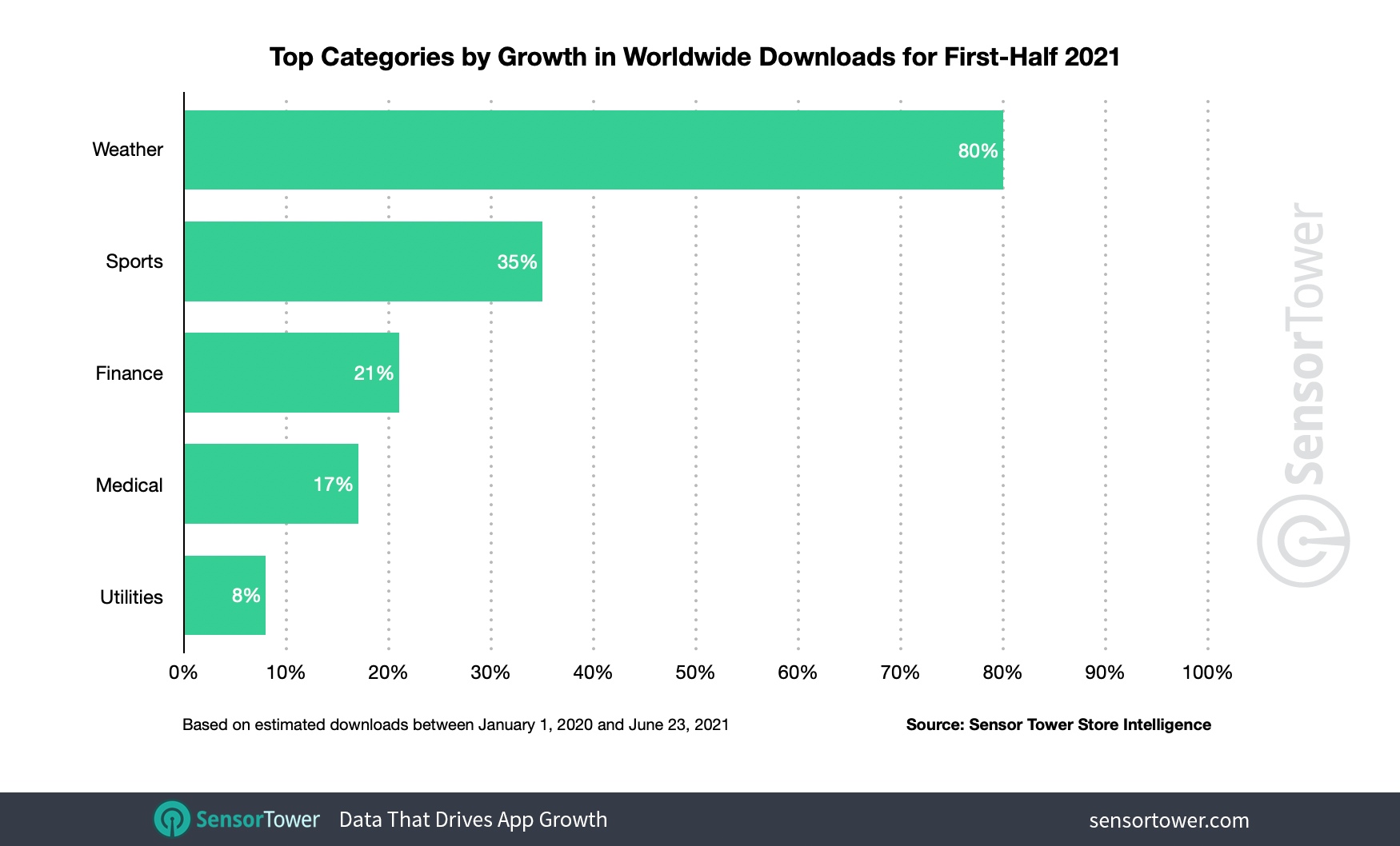 In the first quarter of this year, about 85 percent of non-game apps across both stores offered subscription in-app purchases, a percentage that rose slightly in Q2 to 86 percent. In Q1 and Q2 of this year, respectively, subscription apps accounted for 76.7 percent and 78.5 percent of spending in the top 100 apps across both stores. Subscription apps among the top 100 non-game apps collectively generated approximately $8.3 billion in consumer spending in the first half of the year alone.

This is Y/Y growth of about 43 percent when compared to 1H20, when subscription apps among the top 100 earning apps generated approximately $5.8 billion.

Initial Sensor Tower projections show that while consumer spending was up Y/Y during the second quarter of 2021, first-time installs were down globally. Across both the App Store and Google Play, consumers spent approximately $32.8 billion in Q2 2021, up 18 percent Y/Y from $27.8 billion in the second quarter of 2020. However, new downloads fell 4.5 percent to approximately 36 billion first-time installs from 37.7 billion in 2Q20.

Mobile games experienced a similar trend, with consumer spending growing 9.9 percent Y/Y in the second quarter to $22.2 billion from about $20.2 billion in 2Q20. Adoption of mobile games fell 6.7 percent to about 14 billion downloads in 2Q21 from approximately 15 billion in the year-ago period.

The ongoing pandemic is still affecting a number of industries worldwide, and as various countries begin to recover, the mobile landscape will undoubtedly shift accordingly. Sensor Tower's full report on the global app ecosystem in the second quarter of 2021 will be available soon, examining the latest trends and analyzing the continuing impact COVID-19 has had on user behavior.