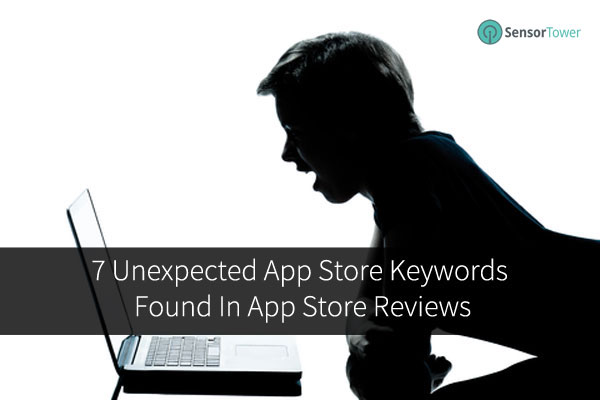 Keyword research can uncover some surprising results. In this post, we will dig deeper into the keyword research process and look at seven keywords that frequently appear in app reviews.

We queried our extensive keyword database and pulled out the most frequently mentioned keywords in US App Store reviews. Then we only selected keywords that were in reviews that had an average rating of less than two, or greater than four. This gave us keywords that had an obvious bias.

For every keyword listed below, we also show the average rating of the reviews in which the keyword appears (in parentheses). Not all of these keywords would be good candidates for use in App Store Optimization.

But they all can teach you something about App Store Optimization and how to find those elusive low competition keywords that will increase the number of times your app is downloaded.

Not everyone who writes "5/5" in their review actually gives the app five stars. This is not entirely unexpected, but the fact that the average was pretty low was surprising. We would have thought that the average would be closer to at least 4.80.

Upon closer inspection, we found that some of the people who use this keyword in their review would have given the app five stars, if not for one or two shortcomings. We discovered this by using our Review Analysis module to search for this keyword in the reviews of some of the top apps. For example, here are two reviews from Clash of Clans. 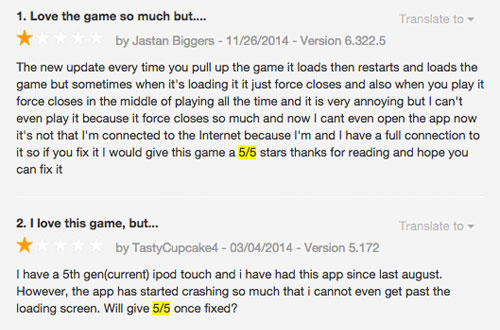 This goes to show that some keywords may not be used in the context that you think they are being used. So take some time to look at search results and reviews that contain your target keyword. You might be surprised at what you find.

Not surprisingly, the average rating of the reviews that this keyword appears in is very high. What is surprising is how frequently this keyword is misspelled. In addition, when we research the keyword, we found that it gets a decent amount of traffic and is fairly easy to rank for, especially on the iPad.

But before you rush to add this keyword to your list, think about relevance. Adding this keyword into your list on its own doesn't have much value. But if you could find a long tail keyword that contains this word, you might be on to something.

Also keep in mind that since this is a misspelling, you won't be able to use it in the title of your app and Apple may remove the keyword from your keyword list or reject your app altogether.

On top of that, autocorrect will usually catch spelling errors, making it less likely that this keyword will actually be searched for. But only testing can confirm if this is a good keyword for your app or not.

Since the misspelling "excelent" gave us some interesting results, we also decided to research "awsome" to see what we would find. The competition is fairly low for this keyword and the traffic is decent.

Again, the same warnings we mentioned above apply to this keyword. However, this confirms that it might be worth exploring misspellings in your research.

Since you cannot give an app a zero-star rating, writing "zero stars" in your review is probably the next best thing. Not surprisingly, this was the keyword on our list with the lowest average rating.

What is surprising is that some reviewers decided to give the app more than a one star rating. Similarly, the keyword "1 star" was mentioned in reviews that had an average 1.83 star rating.

You can use this keyword to find reviews that comment on the negative aspects of an app. It could be used when researching your app or one of your competitors, to learn how to improve on weaknesses.

Some reviewers are very emphatic about how good an app is. So much so that they like to add a lot of o's to their so's.

What is unexpected is that they primarily use this in positive reviews. One might also expect people to write that an app is "soooooooo terrible," but this is usually not the case.

We also looked at other variations of this keyword. Take a look at the average ratings of the reviews that have extended versions of "so."

This is obviously a terrible keyword to use in your ASO, but the keywords that follow this word could be useful. As in: "This app is soooooo ___." Consider searching for this keyword in the Review Analysis module, you never know what you might find.

It was surprising to find "Google Calendar" mentioned so many times. Remember that we queried all of the reviews across all apps on the Apple App Store.

That is a lot of reviews.

In comparison, there are relatively few apps that integrate with Google Calendar. When we research the keyword "google calendar," we find that there are only 172 iPhone apps and 66 iPad apps that rank for this keyword.

Why do you think this keyword is mentioned so many times and has such a high average rating? Let us know in the comments below.

When a keyword like "muy buena" or "very good" is mentioned in a review, you would expect it to have a high average rating. But what may be unexpected is that even though we are showing results from the US App Store, there are still a considerable number of foreign language keywords in app reviews.

Just like some of the other keywords mentioned above, this is not a keyword that you would want to use in your keyword list. However, it shows you that you should research keywords in other languages, even if you are looking for keywords for the US App Store. Our Keyword Translation module can get you started.

We hope that these examples have given you some ideas on how to uncover less competitive keywords that will get your app downloaded more. If you want to explore other edge case keyword strategies, be sure to read this post.

What came to your mind when you were reading about these keywords? Let us know in the comments below...