We touched on app bundles back in June when we covered the iOS 8 changes that were announced at WWDC 14. When we say "touched," it was actually only three sentences.

But since this new feature has the potential to have a big impact on the revenue of publishers with multiple paid apps, it certainly deserves more attention than just three sentences. So this post will give you details on who will benefit, how app bundles will work and how they can be used effectively to increase revenue.

Publishers That Will Benefit

When we looked at the top 100 apps in each iOS category last year, we noticed that certain categories typically have more paid apps than others. In addition, paid apps in the Weather and Navigation categories generally have higher than average purchase prices.

Other categories that have more paid apps than average are the Business, Health & Fitness and Medical categories. These categories should see increased sales, provided publishers use bundling effectively. 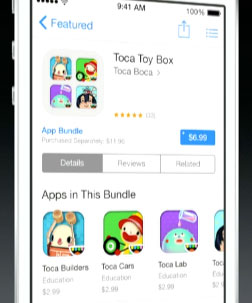 Any app publisher with paid apps can create a bundle. It is a simple setting in iTunes Connect.

Downloading a bundle will be as easy as downloading a single app. The apps in the bundle will appear as individual apps on the user's device. There won't be any indication that an app was part of a bundle.

Your account can have up to 10 app bundles and each individual app can only be included in a maximum of three bundles. The apps in a bundle must be available in the country where the bundle is being sold.

Each app in a bundle must be available for sale individually also. So there won't be an opportunity to create bundle specific apps.

If a user already purchased an app that is in a bundle, you can give them the chance to buy the bundle at a discount. This could potentially be a great upsell.

The App Store will make this feature available this fall. All 155 countries will have this capability.

To learn more about app bundles and other features in the iOS 8 update, read this post, or visit the Apple Developer website.

The ability to bundle apps should result in increased publisher revenue because people will have the opportunity to get a better deal. You could build bundle upsells into your apps to get people to spend more money once they have downloaded one of your individual apps. It can also be used to monetize free apps.

But bundling could also have the opposite effect.

If excessive bundling is used in niches that are particularly price sensitive, it could result in price wars that reduce revenue across the board. It will be interesting to see how this plays out.

Watch out for how app bundles affect your category. Even if you don't have paid apps, it could change the dynamic of certain niches.

You could potentially see a shift in how apps in your space monetize. If paid apps essentially become cheaper through bundling, more apps could move to a free with in-app purchases revenue model if they are not making enough on the upfront charge. On the other hand, free apps might also have to move to a paid model if people would rather get multiple paid apps for a lower cost.

Or it could be business as usual. The important thing is to recognize that there could be a change and do some testing to find out what works best for you.

Will we ever see cross-publisher bundles? That could potentially have more value to publishers. If that is something that would interest you, let us know in the comments below...