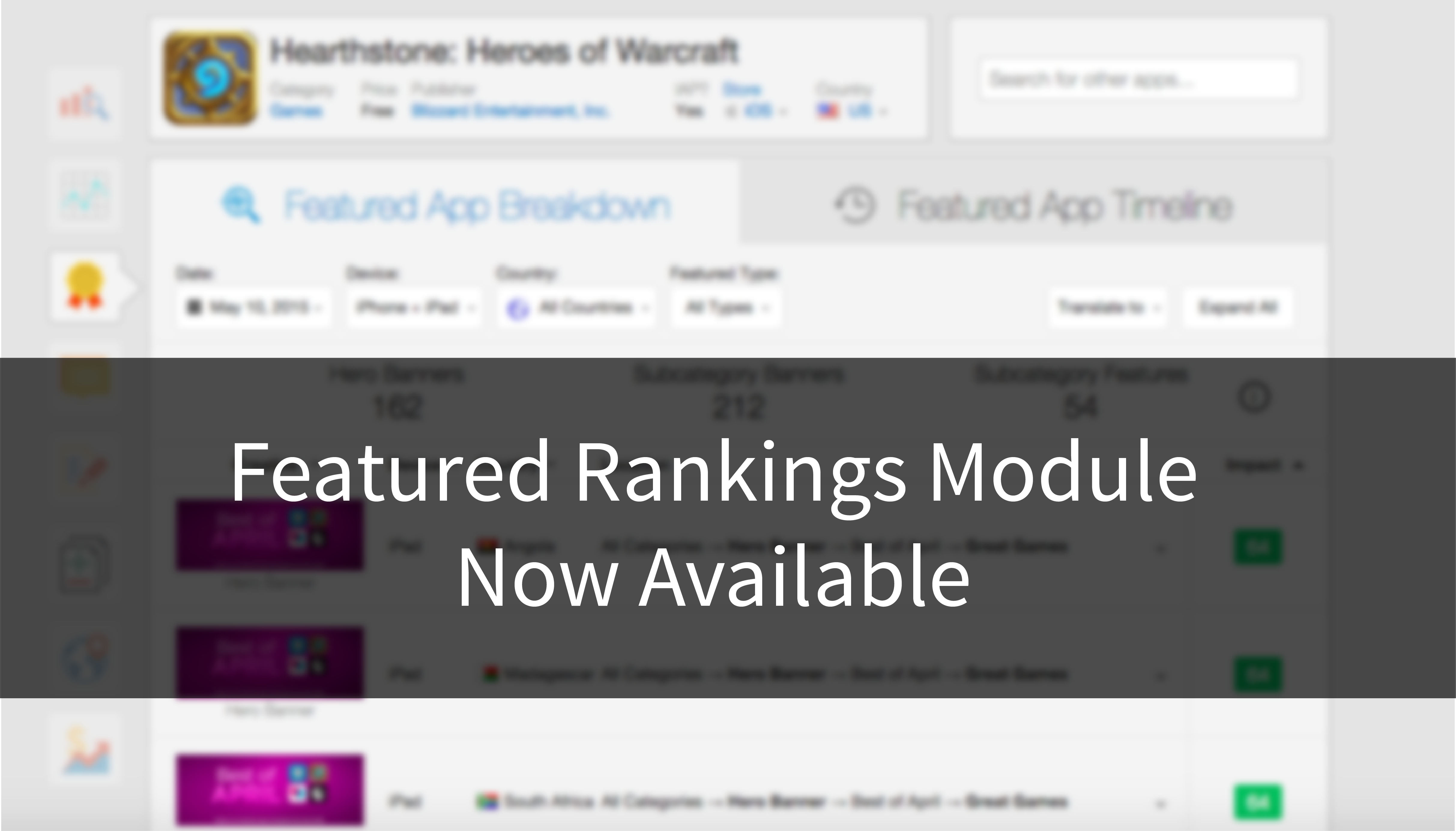 Seeing a major increase in organic app installs is always a good thing. Once you’ve finished celebrating, you’ll probably want to know how these new users found your app. Did your latest metadata update really hit the mark? Has TechCrunch given you a mention?

Another plausible option is that your app has been featured in the store. Depending on where an app is featured, developers can see a dramatic impact in daily downloads. Apple doesn’t notify publishers as to when or where featuring occurs, so we’ve developed an additional module that gives precise visibility into the details. Unlike other ASO platforms, we even display the creative assets.

In this post, I’ll walk through the different ways your iOS app can be featured. Then, let’s take a look at the new Featured Rankings module in Sensor Tower to see how it can help you on a daily basis.

When you open the App Store on your mobile device, you’re automatically brought to the Featured page. At the very top of the screen, a full color, rotating banner spans the width of the page. This carousel is what we refer to as the hero banner. 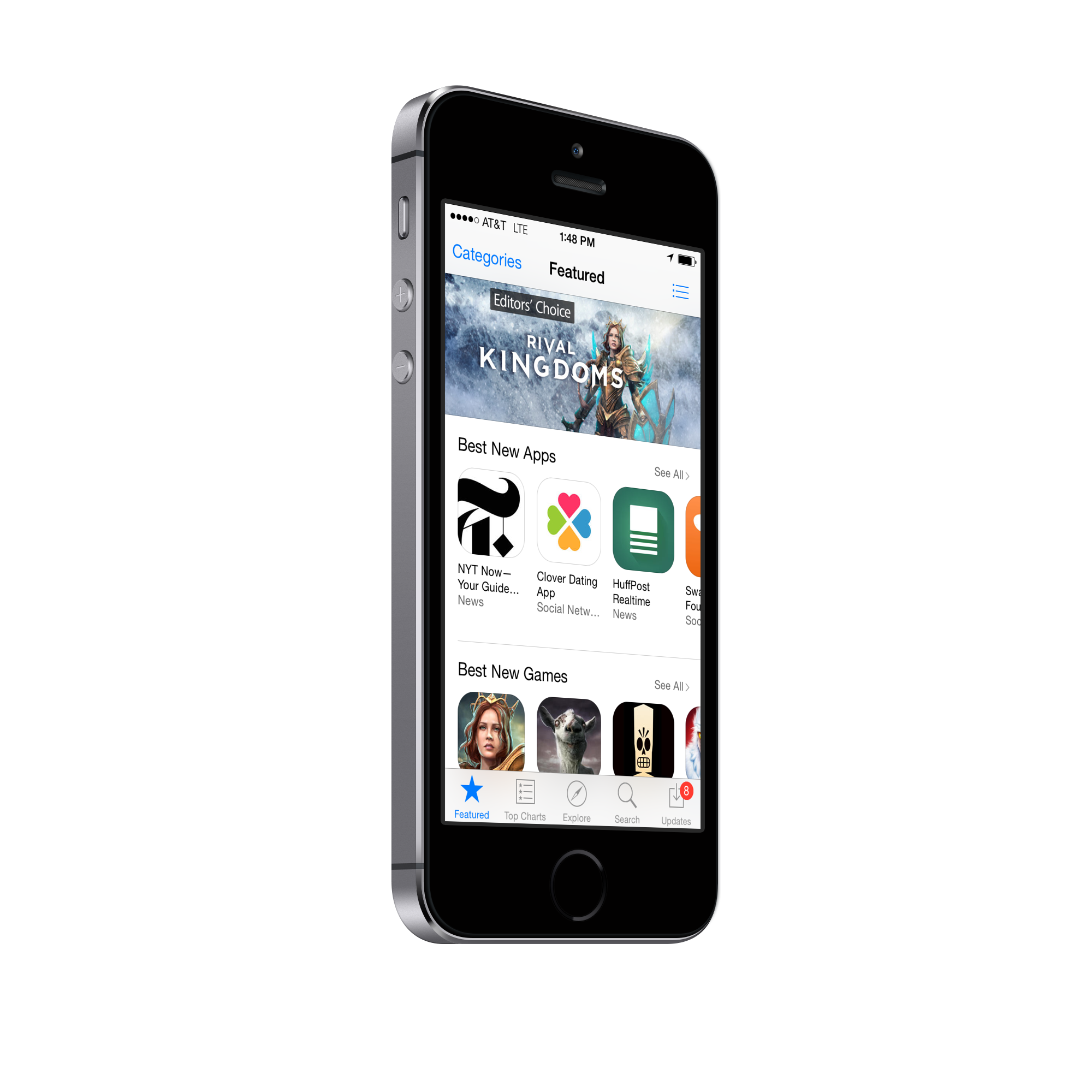 Now look one step down the page. See the label for “Best New Apps?” This area is the feature type we refer to as subcategory featuring. There can be several subcategory features per page, and Apple refreshes most of these topics once per week. For example, a subcategory feature today is called “Bike to Work,” and includes relevant, noteworthy apps like Strava and Citymapper.

The third type of featuring is a subcategory banner. A great bonus of this feature is that the creative asset is larger than an app icon. Also, subcategory banners (just like hero banners) can point to an individual app or a collection of apps. Having your app featured solo gives even greater visibility, as the number of taps to download decreases.

All three feature types exist on every page of the mobile app store. Hero banners will always appear at the top, with a subcategory feature on the second row. Note that features and placement can be very different on iPhone and iPad, so you’ll want to use our platform to investigate both. 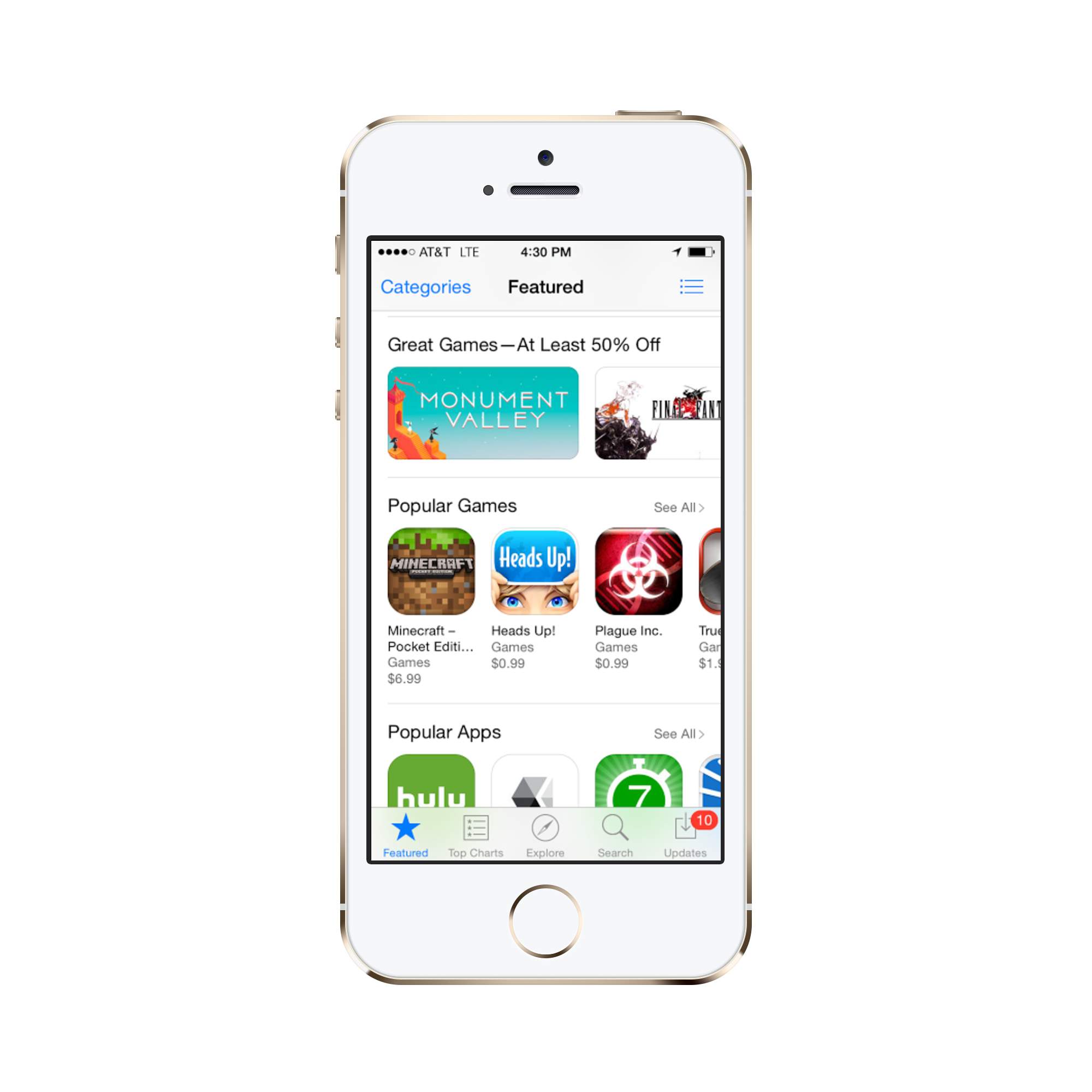 You’ll find the Featured Rankings module on the Sensor Tower profile page for any iOS app in the store. 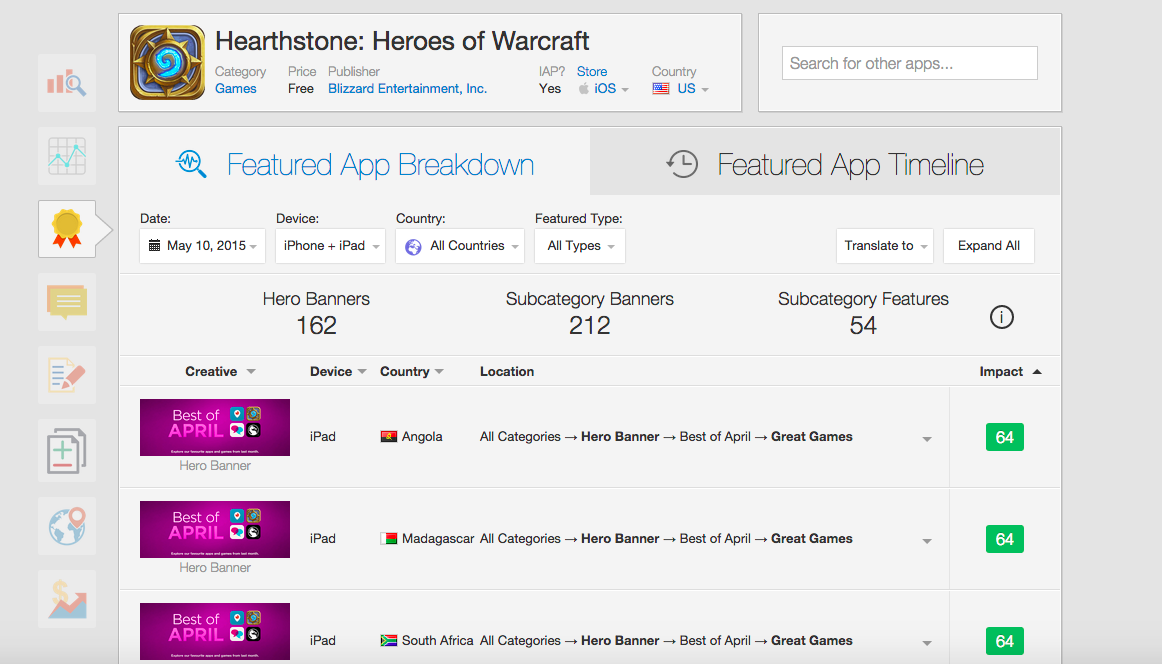 The Featured App Breakdown provides a day-by-day overview of every feature an app receives. Want to see how many Australian subcategory banners contained your app on Monday? No problem! Use the dropdowns to customize your view by date, device type, country, and feature type. For our enterprise partners, we’ve even included the ability to translate all featuring information to the language of your choice.

Click directly on a feature to open the details view, which will show the path a user must take to find your app. We’ve included tooltips to reveal where each feature is positioned, either vertically or horizontally, on the screen. Certain positions have a much higher impact on how often an app is viewed.

The Featured App Timeline displays total number of features per day, across a customizable date range. Below the graph is a breakdown by country, revealing which market has the highest percentage of visibility due to featuring. 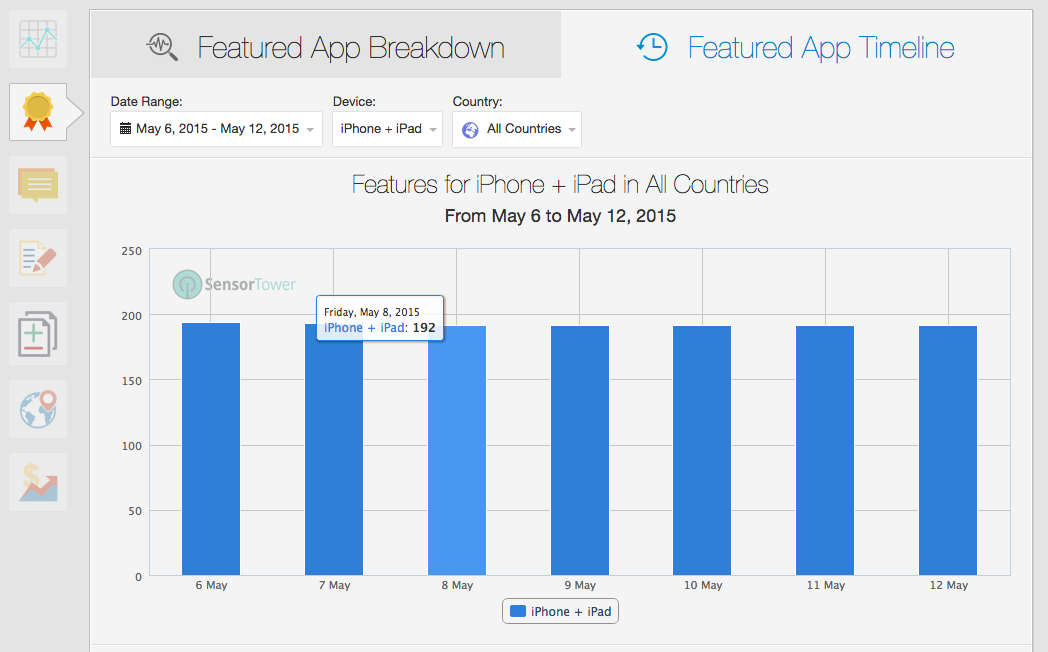 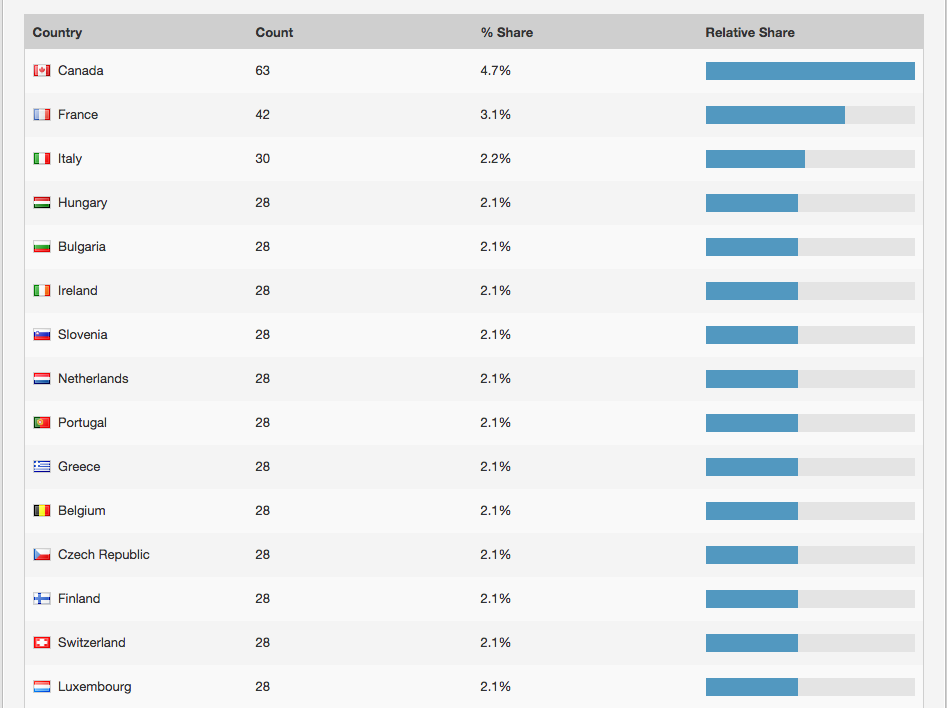 Incorporating Featured Rankings into Your Workflow

Referencing Featured Rankings on a regular basis will provide increased insight into your app’s lifetime performance. Growth in certain countries can be quickly cross-checked on the Featured App Timeline to easily spot correlations. While assessing your downloads, impact scores will help you pinpoint what role a feature played on a particular day. And because we’ve provided a visualization of the full path, from the feature to an app’s download page, you’ll understand who your real audience is even better.

How do you plan to use Featured Rankings in conjunction with your ASO efforts? Share your ideas with us in the comments section below!