On November 3, Apple instituted what from all indications was a significant update to its App Store search algorithm. Sensor Tower's in-depth review of the changes is ongoing, but we've made some significant discoveries already that we wanted to share with the ASO community.

Though the algorithm change appears to generate better relevance for many search results, our App Intelligence data shows how a large number of apps can be adversely impacted.

Flash update: Apple appears to be changing behaviors again as we publish this report… read on for more details.

The changes—at least in part—involve the algorithm Apple is using to locate the closest possible matching keywords to the search terms entered by a user. According to our research so far, Apple has broadened its matching criteria so much that, for certain keywords, near matches have been causing a significant lowering in rank of a large number of apps that users are genuinely seeking.

For example, when searching the App Store for the term "wealth" prior to November 3, users would have seen apps primarily based on use of the the keyword wealth in their title and keyword string.

As of November 3, users were instead presented with matches for "wealth" and "weather" (as seen in the iPad screenshot above).

In fact, very often, "weather" based apps were featured far more prominently than those legitimately focused on the topic of wealth. This may be due to other weighting factors Apple uses to determine rank beyond keyword matching, like download momentum. But the overall effect is to push unrelated apps to the very top of the search results.

That said, based on our data, these were the top 10 iPhone and iPad apps ranked for the keyword "wealth" on November 2: 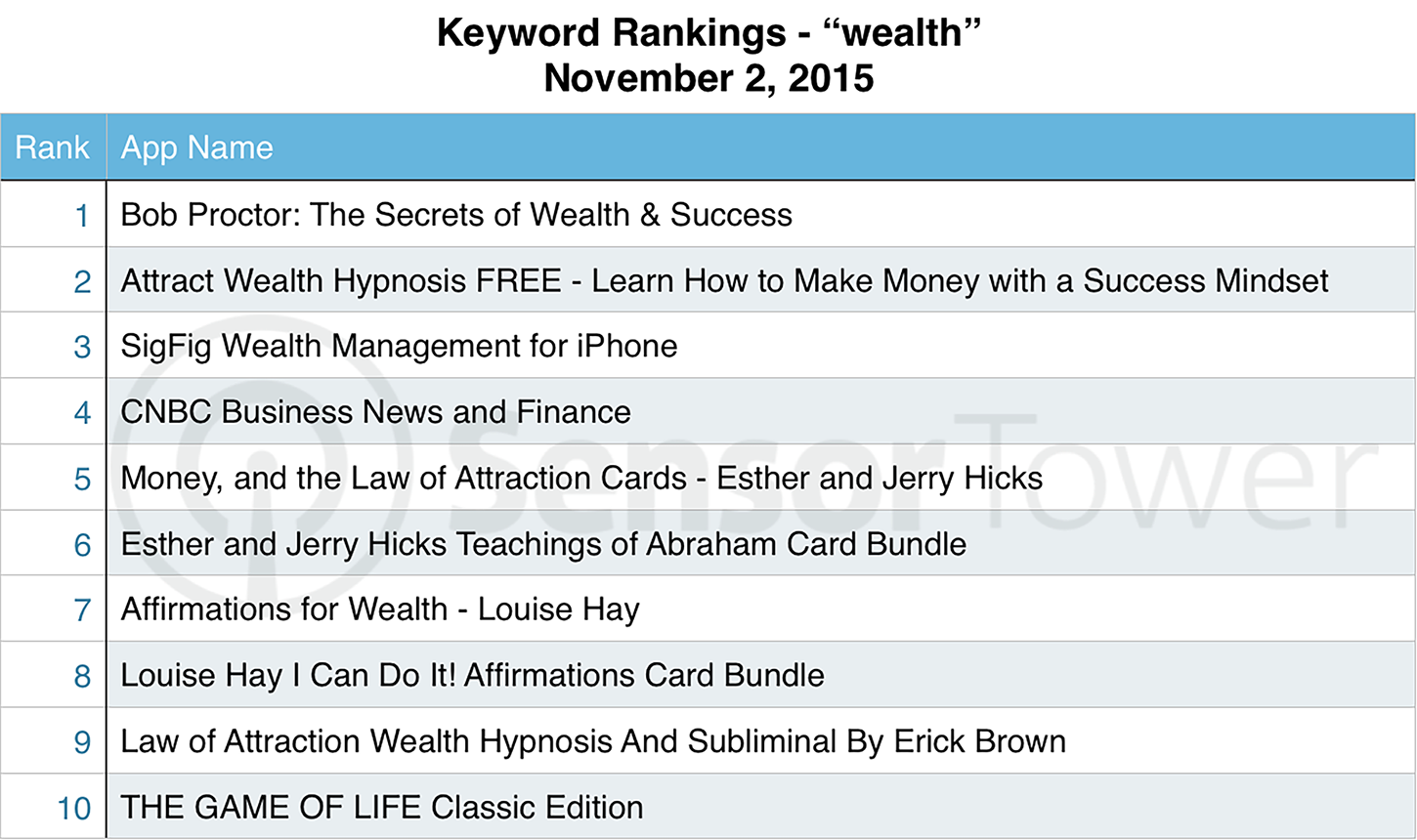 Note: Although some of the apps listed above from November 2 may not appear "wealth" related, we can see from using App Intelligence's Keyword Spy feature that they very likely do use "wealth" in their keyword string (Electronic Arts' "Game of Life classic edition" is one such example).

In contrast, these were the top 10 ranked iPhone and iPad apps for the keyword "wealth" after the algorithm change on November 3: 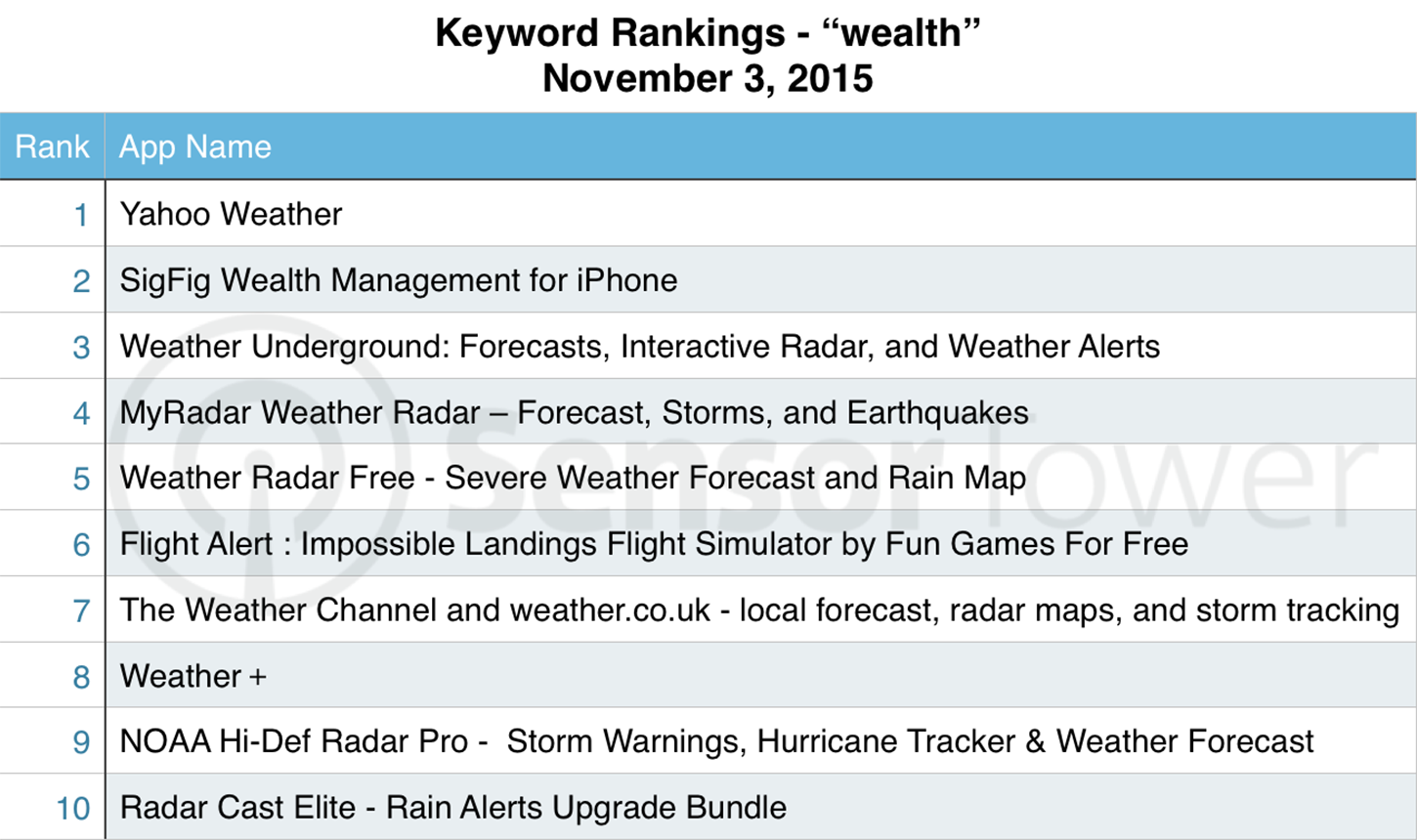 Note: As of this posting, Apple appears to have resolved this behavior in some cases, such as "wealth" versus "weather", but it persists with others, such as "sloth" versus "slots".

Apple's expansion of keyword matching criteria was likely intended to improve search relevance for different conjugations of user-entered search terms: plurals and tenses, for example. However, Apple appears to have shuffled the deck significantly for apps that are targeting keywords that have "close cousins" that go well beyond conjugation changes.

The challenge for app developers is knowing in advance what heavily trafficked keywords may be lurking two to three letter changes away from the keywords they have selected for their titles and keyword strings (apps about sloths are sadly being outranked in droves now by "slots"-related apps!).

We would expect Apple to look very closely at some of these unintended impacts. In fact, over the last 18 hours, we've seen some revision of this behavior—but only for certain keywords.

More tweaks are likely forthcoming. In the meantime, we recommend using Sensor Tower's App Intelligence Keyword Spy and Ranking Modules to help shed light on possible collisions between keywords. And without a doubt, we will continue our research into this topic and will deliver updates here on the Sensor Tower blog as we have more results to share.