Welcome to Apps We're Watching, the new weekly column by the Sensor Tower mobile insights team where we take a closer look at some of the new and interesting apps that hit our radar in the past seven days. This week, we're putting the spotlight on the astonishing launch of Clash Royale from Supercell, the arrival of a new Siri competitor in the form of Hound from SoundHound, and how the recently updated Square Cash is closing ground on the mobile wallet champ Venmo. Keep reading for our insights and analysis.

We've known that Supercell's Clash of Clans spin-off was headed for a worldwide launch in March for a few weeks now, but an exact date was never divulged. After soft-launching in Australia, Canada, and several other regions at the start of this year, it finally went live globally this past Tuesday, March 2. Within 12 hours of its midnight Pacific release in the U.S., it had reached No. 1 in all categories on iPhone. In the chart below, you can see what the launch looked like hour-by-hour compared to Android: 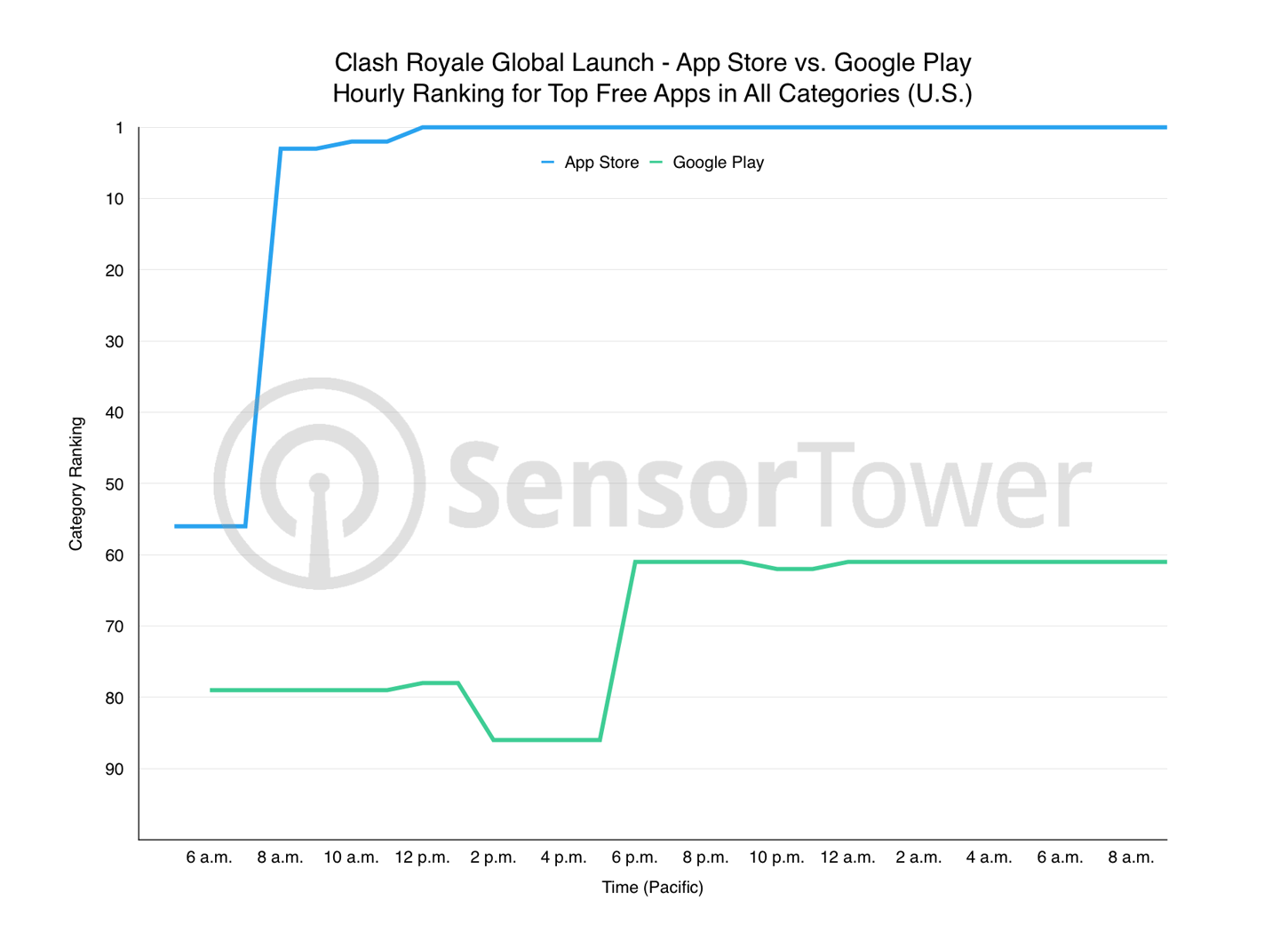 As of this post, Clash Royale remains at No. 1 in all categories on iPhone and iPad, as well as on Android.

What's even more impressive: Supercell's latest has already reached No. 1 on the top grossing chart for all categories on iPhone in the U.S., overtaking Spotify, Game of War, and Supercell's own Clash of Clans in less than a day and a half. By doing so, it has become the only gaming app to surpass Clash of Clans and Game of War in daily U.S. revenue in more than a year.

While this is undoubtedly an impressive feat, we're waiting to see what this means for Supercell's previous king of the hill, Clash of Clans. Will Clash Royale eat into its revenue potential in the long run? The next few weeks should be very interesting to watch on that front.

Next up this week is Hound, a voice-driven assistant from music discovery service SoundHound that's going head-to-head (or at least syllable-to-syllable) with the likes of Siri, Cortana, and Google search on mobile.

The voice search/concierge app landscape is definitely still in its formative phase, but SoundHound is confident that its offering can stand out not just through more accurate speech-to-text, but the ability to intelligently refine queries—ex: "Show me nearby coffee shops" followed by "Now show me only the ones with free Wi-Fi."

While Google's search app has supported voice queries for some time, that app hasn't focused solely on the functionality like SoundHound's or Microsoft's previously Windows-only Cortana. The latter was launched last month and has yet to make any major waves on iOS or Android, but again, these are still early days. This is definitely a category of apps we'll be keeping a close eye on going forward.

Finally this week, we saw Square make an intriguing—if not a bit curious—update to its Square Cash mobile money-sending app by adding the ability for it to hold a balance, just like its main competitor, PayPal's Venmo. We say it's curious because a main selling point of Square Cash has been its immediacy—i.e., money moves into and out of a user's connected bank account without the delay associated with Venmo and PayPal. With this new (albeit optional) feature, there's an extra step in the mix.

That step can actually be beneficial for some users, however, such as businesses that wish to keep a cash balance and use the app's bookkeeping functions, or consumers that want to set aside funds from their main account for entertainment and other luxuries.

In researching Square Cash this week, we noted that since fall 2014 it's been making slow-but-steady inroads on Venmo in terms of user acquisition. Prior to its addition of the ability to send money via SMS in September 2014, its growth was flat, but it's managed to steadily increase new users in subsequent months and has closed the gap on Venmo considerably, as you can see in the chart below: 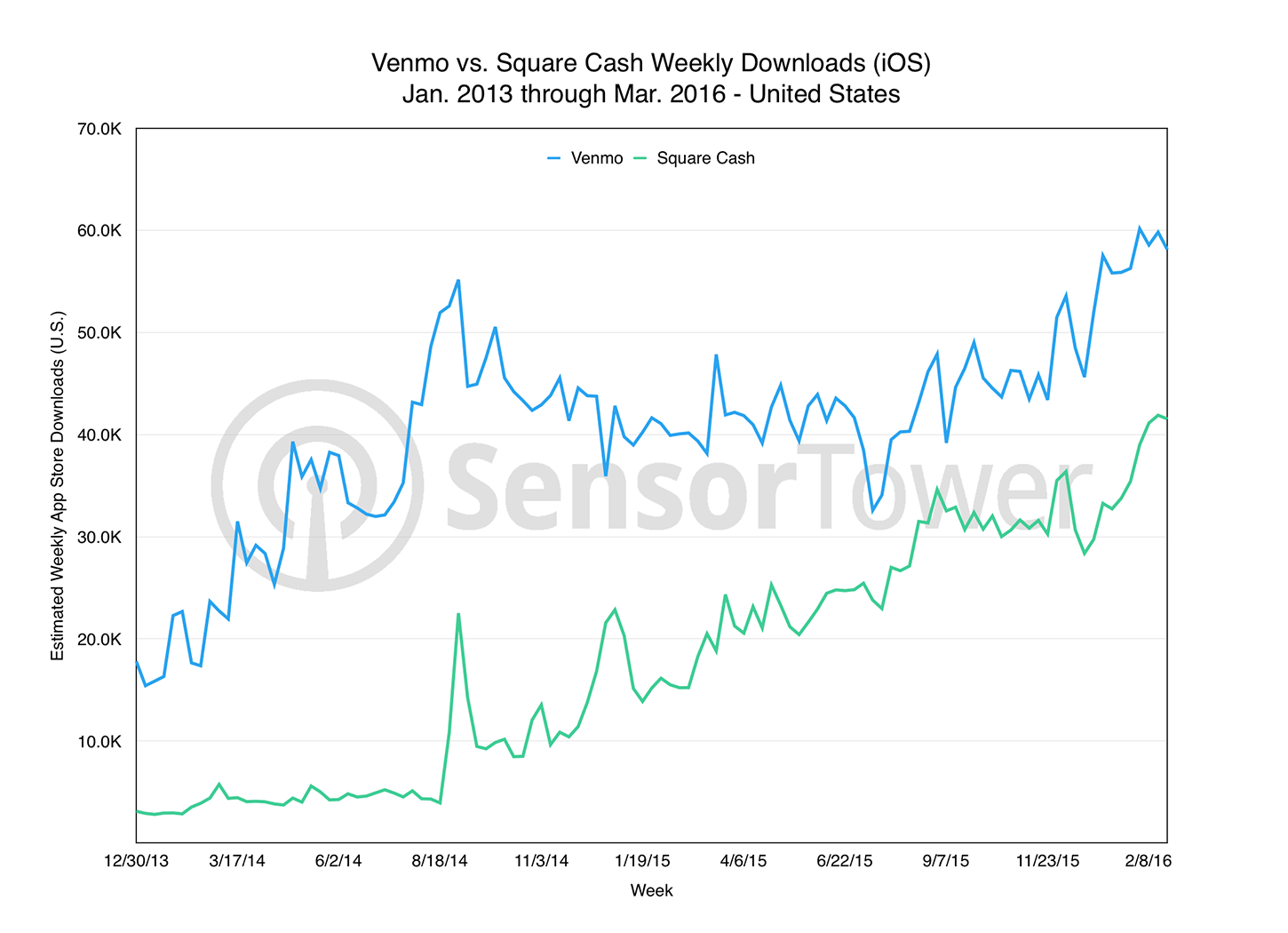