This week, Apps We're Watching looks at how "the front page of the internet" finally came out on top of the App Store, why the Mickey crossed the road (hint: our data shows it was to make an already huge game even more popular), and whether there's room for another subscription-based video streaming star on the mobile red carpet. Read on for the full stories and analysis. 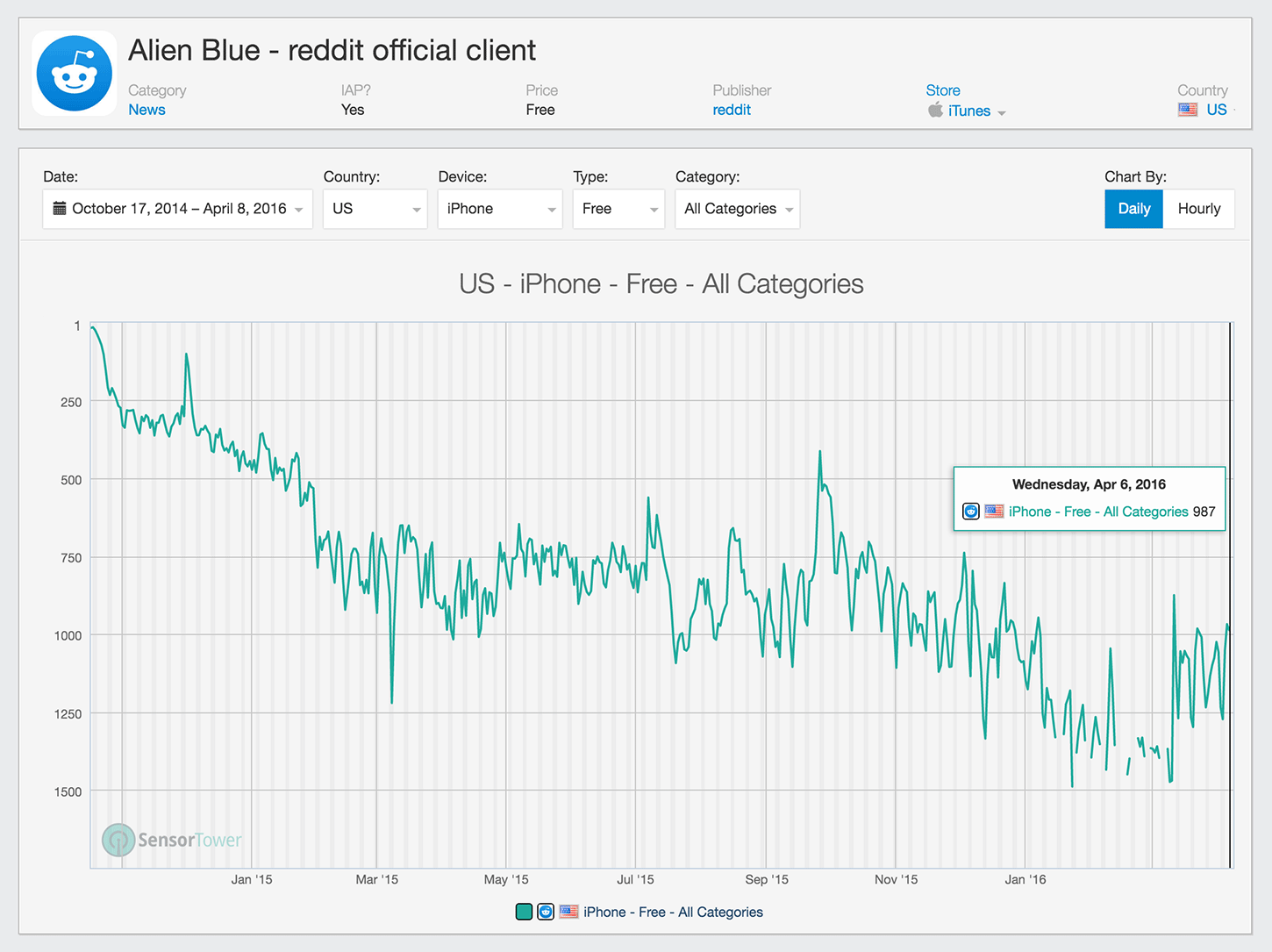 Alien Blue was ranked No. 987 in all categories the day before Reddit: The Official App launched.

Reddit has been around for 10 years, but until yesterday it didn't have an app—well, at least one it had created itself. Last October, the popular crowdsourced news site acquired Alien Blue (at the time the most popular Reddit app for iOS) but, as the App Intelligence Category Rankings history above clearly shows, it never managed to compete with the upper echelon of the App Store. With the release of Reddit: The Official App, that all changed.

While Alien Blue never managed to crack the U.S. top 10 (its all-time-high rank was No. 18), Reddit: The Official App climbed to the top of the charts—passing even Facebook, Snapchat, and Messenger—in its first 24 hours of availability.

Several factors are likely contributing to the rapid ascent, not the least of which is Reddit's recent announcement that it is discontinuing development on Alien Blue. It is also gifting three months of Reddit Gold, the premium ad-free version of the service, to early adopters. On top of this, the app received featuring from Apple on the U.S. App Store at launch.

Mickey Crosses the Road—Straight to the Top of the Charts 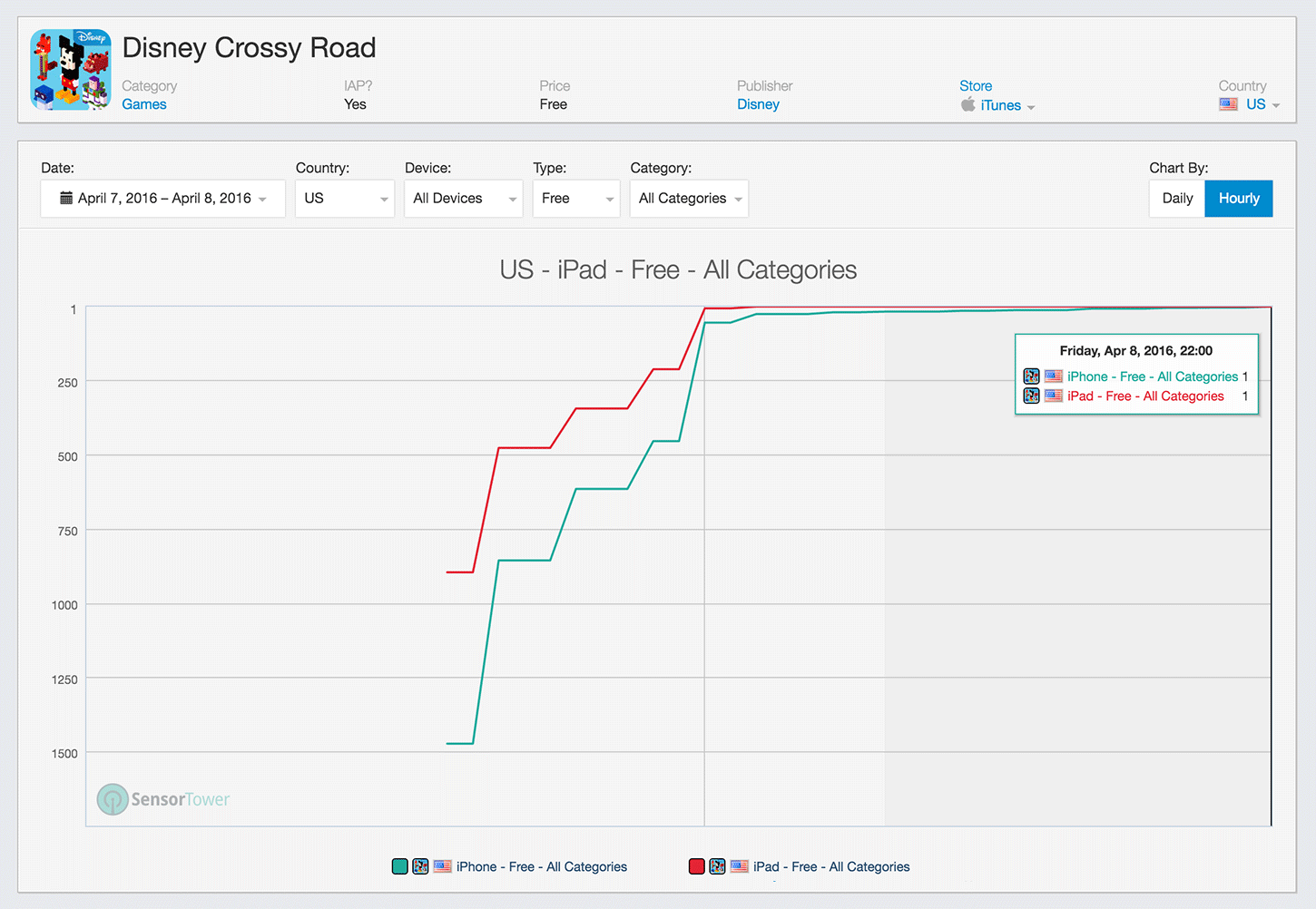 Disney Crossy Road is the latest major iOS gaming release to rocket to the top of the free apps chart.

Soft-launched in Canada on Monday, Disney Cross Road—the Mouse House's amalgam of its famous characters with the App Store-famous Hipster Whale title Crossy Road—wasted no time with a worldwide launch. It also didn't dawdle when it came to surpassing its predecessor's all-time high ranking in all categories.

In less than 24 hours, Disney Crossy Road became the No. 1 free app on the U.S. App Store, supplanting the previously mentioned Reddit: The Official App and topping the fourth place ranking the original Crossy Road managed in November of last year.

The inclusion of beloved Disney characters and settings in this version no doubt had a comically oversized, white-gloved hand in its quick rise to the top. If the staying power of the original game is anything to go by, we expect Disney Crossy Road's time in the top 10 to be lengthy.

Last up this week, cable network Starz delivered a significant revamp of its mobile app alongside the rollout of a legitimate subscription-based streaming service a la HBO NOW.

In order to distinguish itself in ways other than its content offerings, the network decided to undercut competitors including HBO and Netflix by pricing its service at $8.99 monthly (as opposed to $9.99) and include the option to download content for offline viewing. The app can also still be used to view on demand content by Starz's cable subscribers, although reviews have been critical of its removal of Comcast Xfinity support.

As you can see in the chart below, the service's debut definitely had a positive impact on the Starz app's ranking, although we've seen its initial popularity begin to wane after it peaked significantly below both Netflix and HBO NOW in all U.S. categories. 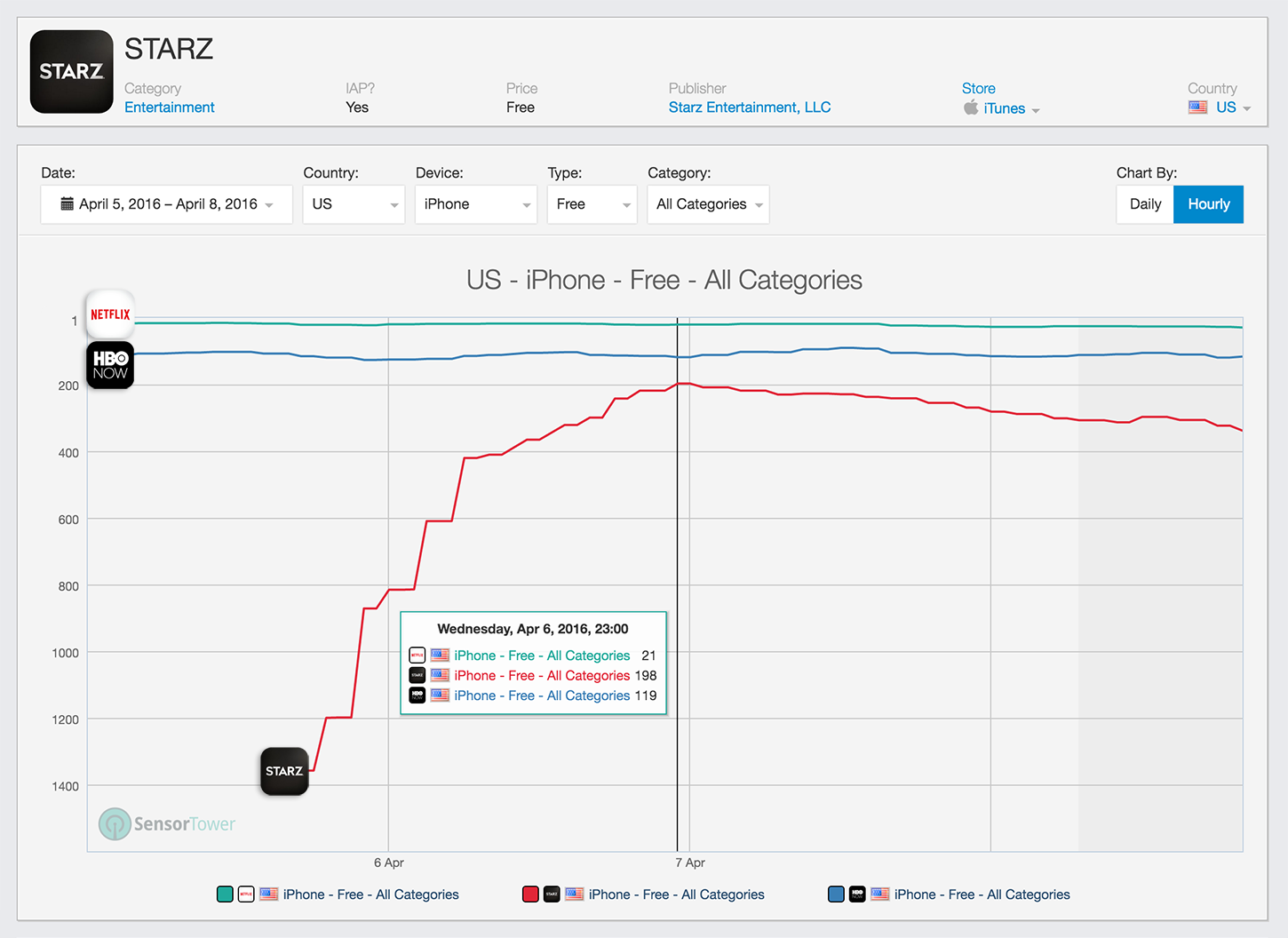 Starz came within 79 positions of HBO NOW this week, an impressive improvement. These are still early days for the service, however, and Starz no doubt intends to invest heavily in marketing its entry into the subscription-based mobile video fray. We'll be following the app's performance closely in the coming months.