We track various app marketing methods and we have noticed a steady rise in Cost Per Install (CPI) advertising. Some of the recent increases have actually been quite substantial.

This post will show you what you can expect to pay and how quickly costs are rising. CPI will obviously vary, depending on the ad network. But these examples will give you a good overview.

First, let's look at the overall increases across all categories. A recent report by Chartboost shows that the CPIs on their network increased modestly in June 2014.

The average CPIs on Google Play increased by approximately 5% to $1.06. This average does mask big gains in some countries however. For example, Hong Kong, the United Kingdom and Korea all saw more than 33% increases in their Google Play CPIs.

Although iOS CPIs stayed relatively the same from May to June, they are still much higher than Google Play CPIs. April and May did show strong growth however.

Chartboost notes that it is normal for iOS CPIs to flatten out during the summer. Here is what you can expect to pay per install across the big three app ecosystems. 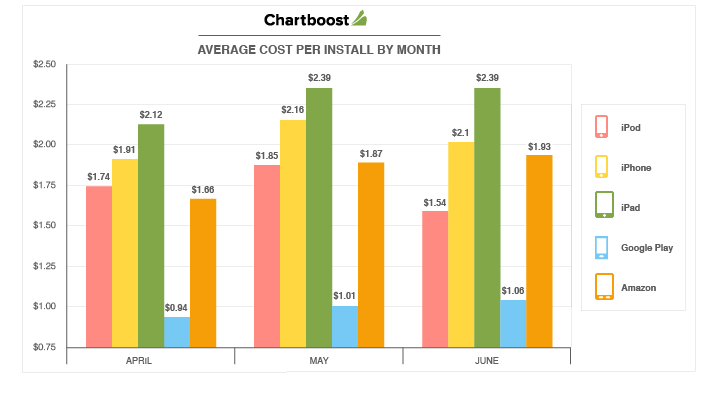 In order to get a different perspective, let's take a look at the CPI results from Fisku. Although they have not updated their CPI numbers since May 2014, this graph gives us a good indication of the CPI trend on their network. Notice the increase from May 2013 to May 2014. There is about a 30% increase for Android and a 56% increase for iOS. 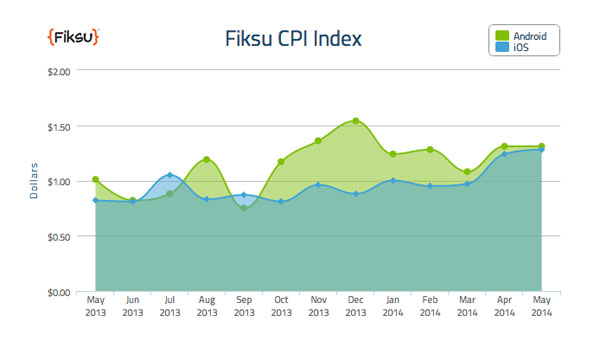 Now let's turn our attention to games. Superdata recently did a study on CPI and Average Revenue Per User (ARPU) in the US and China.

They found that CPI costs rose 37% and ad conversion decreased 4% in the US. Although revenue per user did increase, it was not enough to make up for the increased cost and fewer users. Here is the compete report.

As more apps come to market, it will become increasingly difficult to gain market share through CPI advertising. The data above suggests that there is still room for CPIs to increase overall, but that we may be reaching an upper limit when it comes to ad cost versus revenue in the mobile gaming market.

Advertising can be a great way to quickly scale your downloads. However, it can be risky if revenue per user or conversion rates start to fall.

Therefore, even publishers with significant advertising budgets can benefit from implementing lower risk acquisition methods. One of these methods is using App Store Optimization to get more organic downloads. To uncover other app marketing strategies, also check out blog archive.

Tell us about your experience with CPI advertising. What trends do you notice?