When it comes to ASO, staying on top of the Google Play search algorithm can feel like a challenge. For example, keywords are sourced directly from an app’s description, making regular experimentation with SEO best practices (like keyword density) a must.

Though the rules aren’t black and white, we’ve gathered insights to help app developers improve their metadata and continue optimization. The Sensor Tower data team has investigated trends across Google Play’s heaviest hitters. Applying their strategy to your ASO plan can help bolster your presence in the market.

##How We Got The Data

First, we identified key components of the Google Play algorithm. The length of an app’s description plays an important role in ASO, since there is so much real estate to manipulate. Similarly, there is a large amount of flexibility around the number of screenshots each app can include. We also pinpointed language support, quantity of ratings, and quality of ratings.

Next, we used our Top Rankings chart to identify the top 10 apps in each category. After analyzing each app’s attributes, we calculated averages for the category’s overall behavior.

It’s important to note that results for each category varied by pricing structure (paid, grossing, or free). So our graphs are broken down to reflect this distinction.

Because the description field for an app allows up to 4,000 characters, we see a lot of variation in the amount of text individual publishers actually include. Some favor a more spartan approach, meaning that a repeated keyword stands out aggressively in the field. Others leverage the space to provide detailed overviews, with the hope of earning conversions via characteristic appeal. Let’s take a look at category comparisons to see which strategy might work best for your Android app. 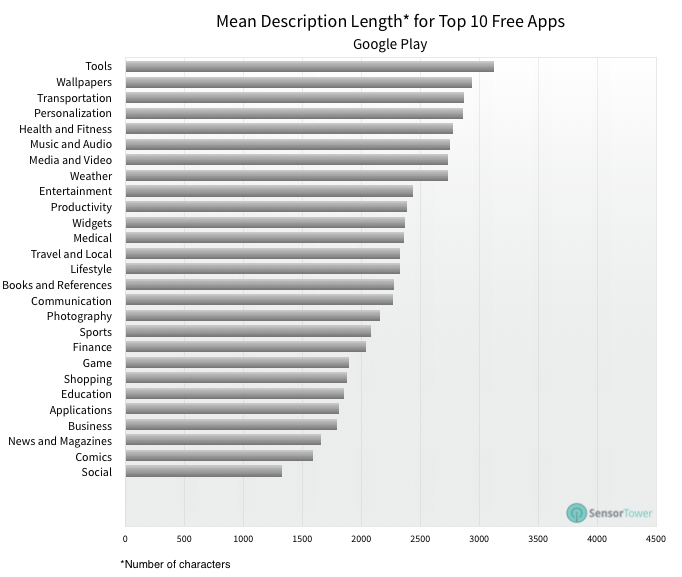 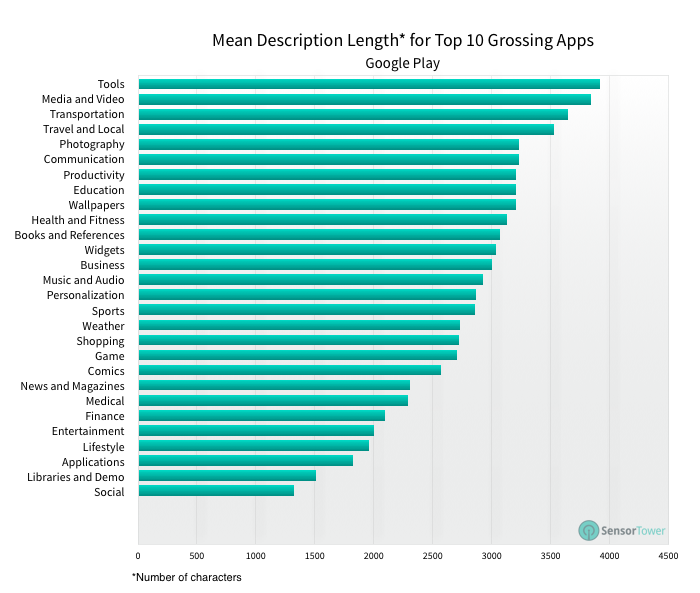 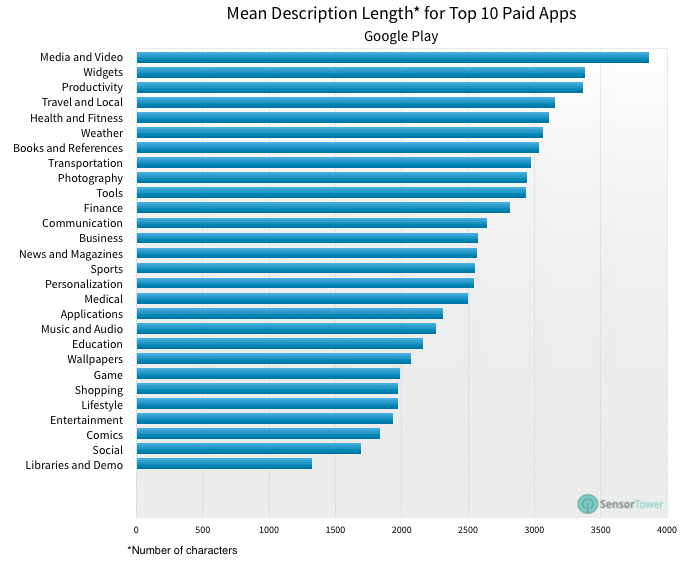 The Education category is an interesting example. When we are focusing exclusively on top grossing apps, Education is at its highest character count (3,204). Within the free pricing structure, the count drops (2,160), and drops even further when the apps are paid (1,849).

We don’t want to solely consider this data across payment tiers. The Social category remains consistent in character count, regardless of how much the app costs. But when you look at how Social stacks up in the individual graphs, you’ll notice the category trends towards the bottom of the pile when it comes to description size.

It’s no secret that ratings have an impact on how well an app performs in the market. Each app profile in the store displays an average star rating, as well as the total number of reviews an app has earned. Memorable in-app experiences increase a user’s likelihood of posting a review, and in turn their reviews signify quality to others. No surprise, then, that the top ten Android apps across all categories consistently earn an average of four stars or higher. 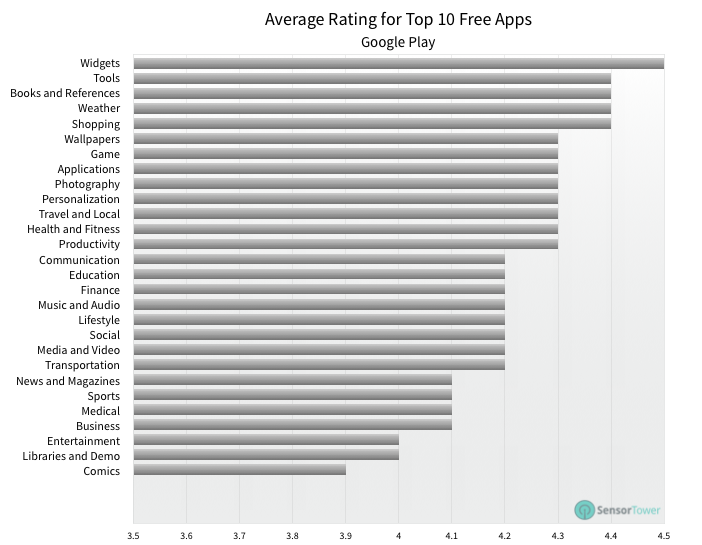 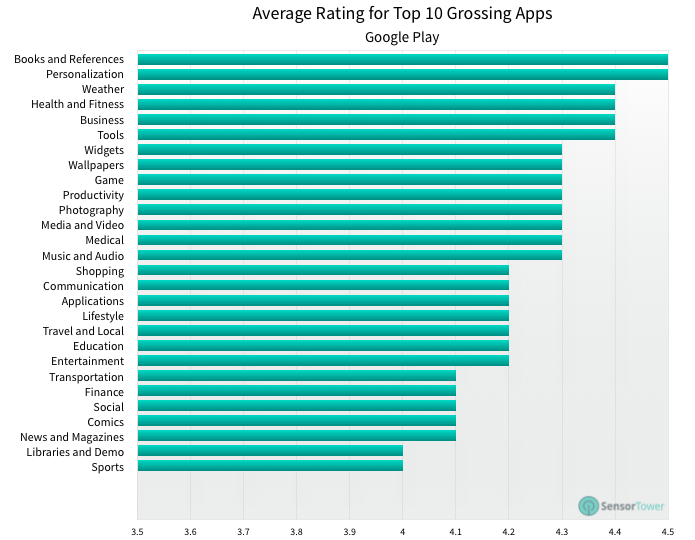 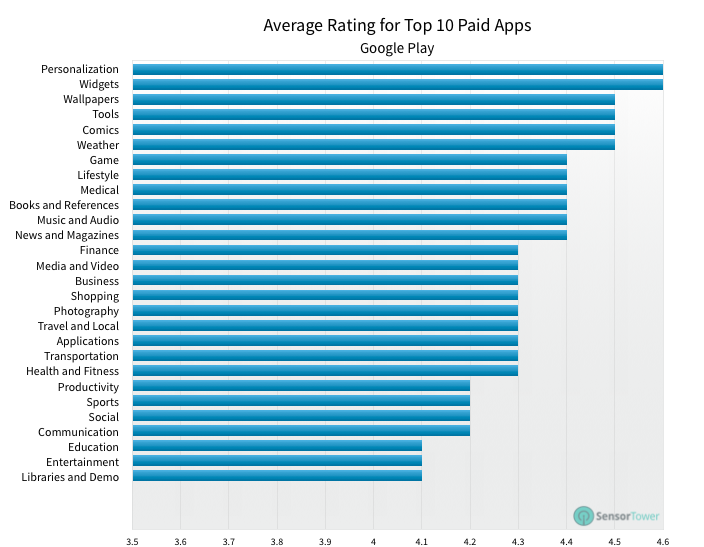 Certain types of apps tend to earn higher numbers of reviews than others. For a category like gaming, you can expect to see review counts in the millions for a top ten app. A category like Finance hovers in the low thousands. It’s also important to note that free apps are reviewed with much greater frequency than grossing apps. Paid apps are reviewed least frequently.

Much like the average rating score, numbers around language support were extremely consistent. Across all categories and payment structures, the top 10 apps in Google Play support at least 23 languages. Aside from the Libraries and Demo category, the majority of these apps support closer to thirty languages.

Finally, we analyzed the number of screenshots used by our top 10 Android apps. Did you know you can include up to eight screenshots for each device type your app supports? So the question then, would be, “How much is too much?” Or maybe you’re wondering, “Have I done enough?” Let’s take a look at the numbers. 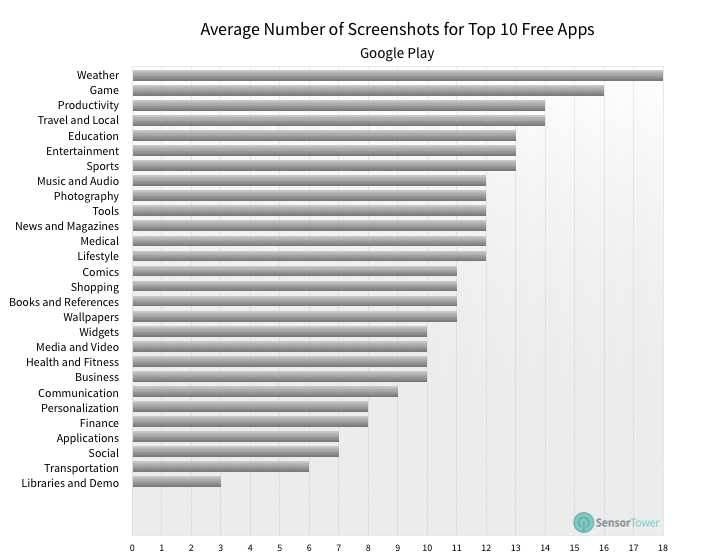 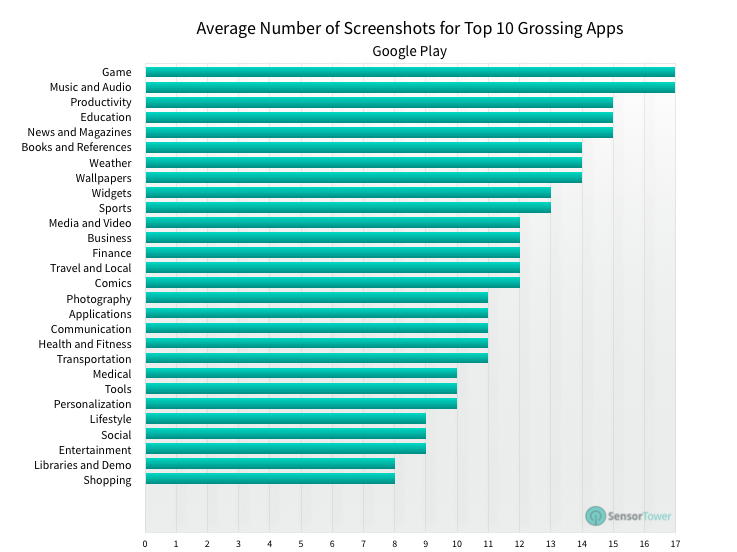 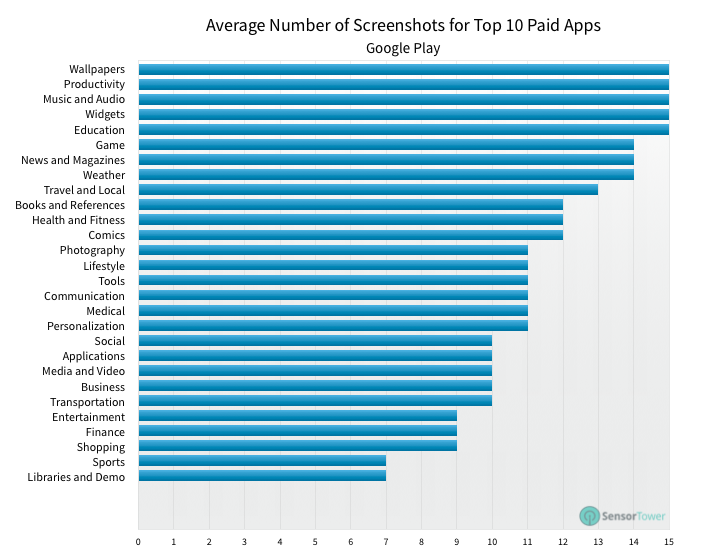 According to current trends, the more the merrier. Supporting more device types means more potential end users, so use the extra screenshot space from Google Play as yet another chance to lure them in.

##What does it all mean?

Competitive analysis is undeniably crucial to ASO, and it’s about more than just keywords. Don’t let black box store algorithms stand in your way! Use all available data to research trends in your space, and in turn you’ll generate a more effective optimization strategy. Categorical trends will help you determine what might appeal to your audience.

While your brand new game won’t get 5 million reviews right out of the gate, now you have an idea about what it takes to get to the top. And if you have bad ratings, you need to do something about them immediately. Are you responding to reviews on a regular basis? Do you have a plan in place for encouraging positive feedback? Are you eliminating potential app champions because their language isn’t supported?

Next week, we’ll be taking a look at the Top Developer Badge in Google Play. Curious as to how this affects an app’s visibility, or what Top Developers have in common? We’ve got the details!