Epic Games is having the kind of launch most mobile game developers dream of — only its overnight hit, Fortnite, isn't even technically playable by the vast majority of App Store users who are downloading it. As first reported by Sensor Tower, the (for now) iOS-only version of the company's immensely popular console and PC survival-focused action game Fortnite Battle Royale, became the No. 1 app on iPhone in 13 countries within 12 hours of release as an "invite event." Now, less than 24 hours later, our App Intelligence data reveals that it has reached the top of the charts in 47 countries. 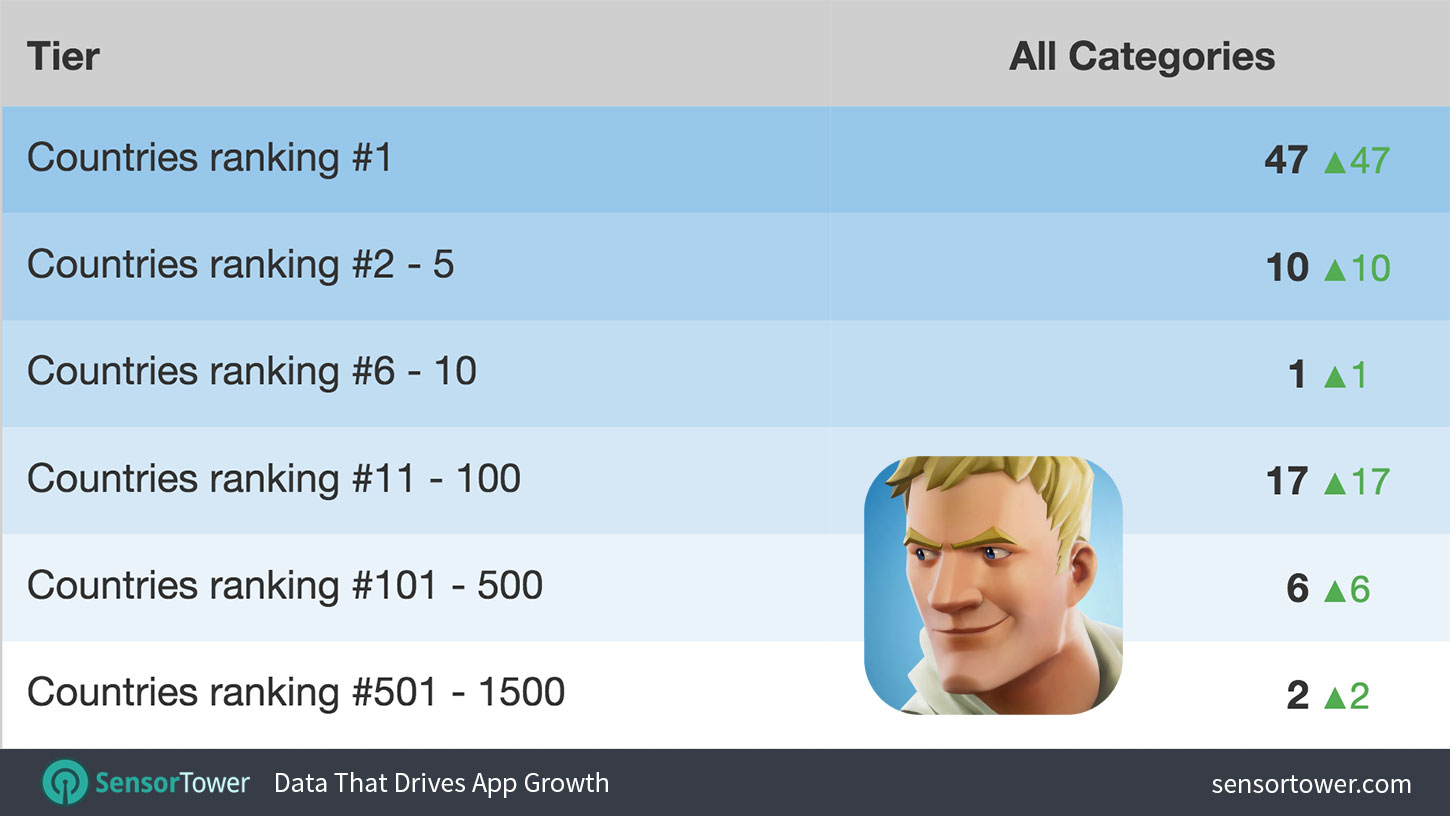 Not only has "Fortnite fever" propelled the game—which has pro gamers and celebrities drawing hundreds of thousands of viewers to live streams simply to watch it played—to the pinnacle of the App Store, but the frenzy to download it has also been a boon to its chief rivals, according to our App Intelligence data.

Although the invite-only version of Fortnite is available for anyone to download from the App Store, it isn't currently being featured by Apple in the Games tab or Today tab, so the only means users have to find it is via search (or finding it at the top of the free games chart).

Fortnite, however, isn't actually the first app that appears when App Store users search for "fortnite"—that distinction goes to rival survival game Rules of Survival from NetEase. In fact, Fortnite is the fourth result for its own keyword currently, after an additional two titles, one of which is another NetEase survival shooter, Knives Out. 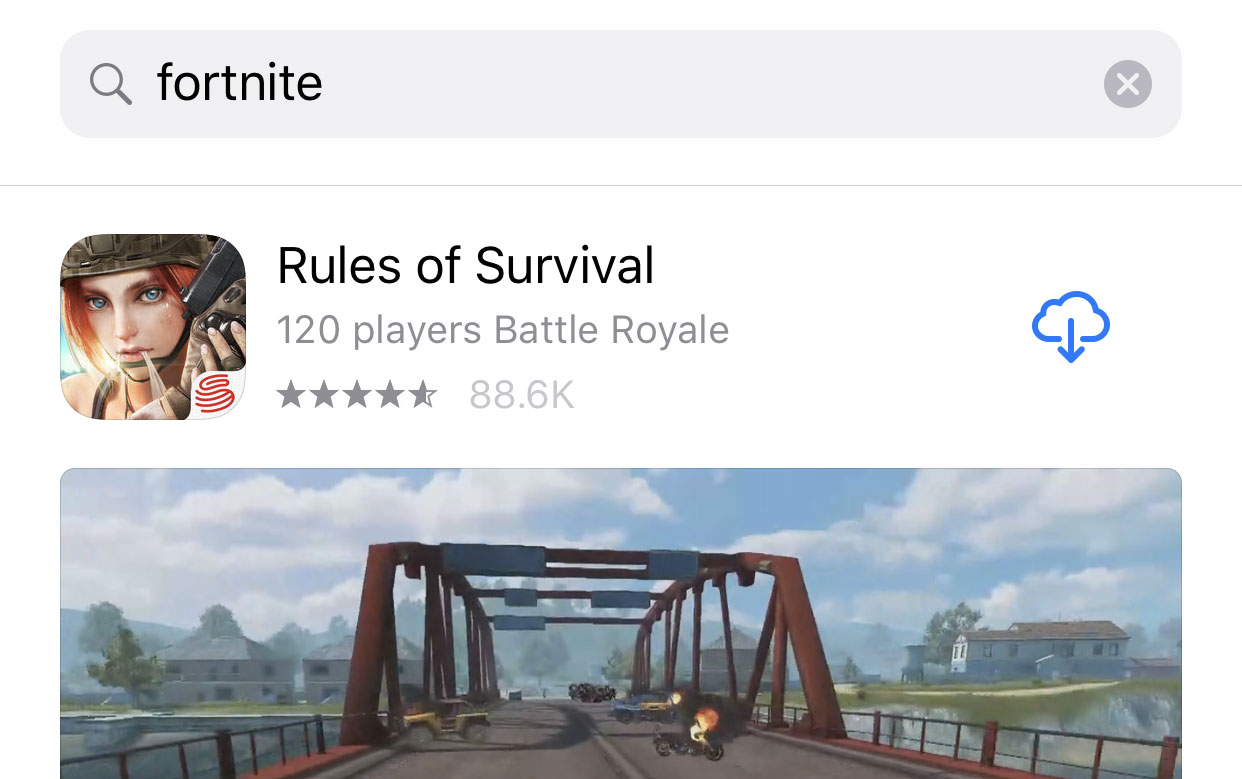 Sensor Tower data shows that, as seen in the chart below, the two NetEase titles are clearly benefitting from Fortnite's lower search ranking. 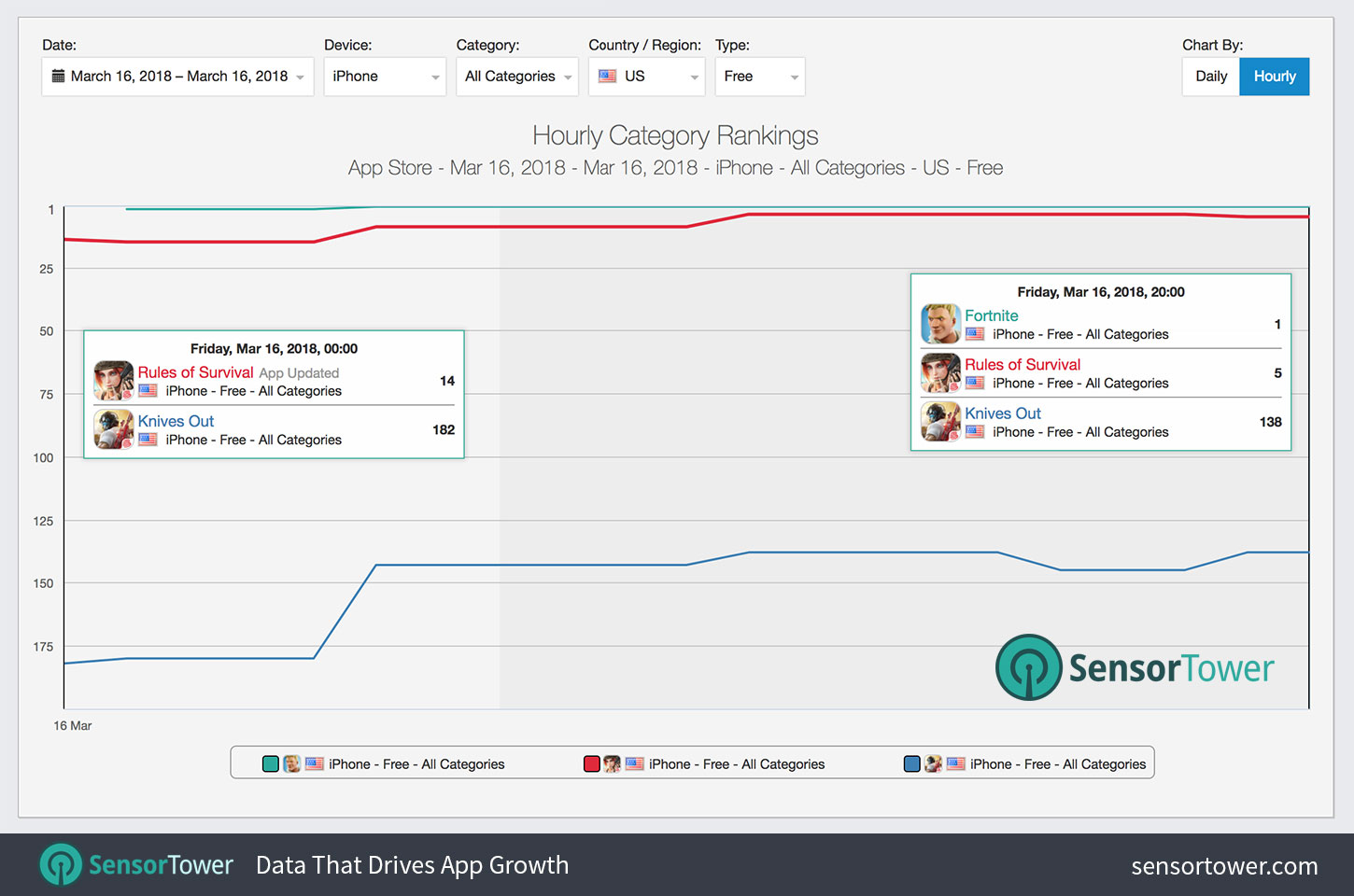 Since the launch of Fortnite, Rules of Survival has increased its ranking among all free iPhone apps on the U.S. App Store by 11 positions, from No. 14 to No. 5. Knives Out has risen from No. 182 to No. 138, or 44 positions on the chart.

In our analysis, other titles returned in a search for "fortnite" have seen their rankings improve since Fortnite's release. The same cannot be said for titles turned up through related searches for the survival shooter genre, such as "survival", "pubg", or "battle royale". However, it's reasonable to think that clear Fortnite analogs such as Rules of Survival and Knives Out are further benefitting from the invite-based nature of Epic Games' title by picking up players who can't yet get into the game.

Japan Is Cool on the Game—Thus Far

Interestingly, for as much as Fortnite fever has gripped much of the mobile gaming world, Japan appears to be a rare holdout. The game has only reached No. 13 there among all free iPhone apps as of this writing, which no doubt has to do with the fact that NetEase's Knives Out has already captured much of the survival game audience's attention there.

Developed in China, it's the No. 1 free iPhone app in the country and No. 8 in revenue, a rare standout among the historically dominant Japanese-made titles on the latter chart, deriving more than 90 percent of its global iOS revenue from Japanese players in February.

We'll have further analysis of Fortnite's mobile launch as it unfolds.