Creating interest in your app before it is finished is difficult. Until you have an app published, it can be almost impossible to solicit feedback from users and get people talking about it.

One of the few solutions to this problem is a website called PreApps. They have an interesting model for getting users involved so that developers can create some pre launch buzz for their app and even get feedback before it is published. 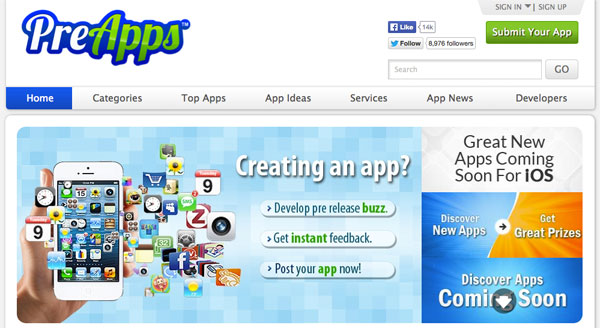 In this post, we are going to take a look at this solution and give you the pros and cons, so you can decide if it is something that will help you promote your app.

From A User's Perspective

If a potential user does not actually have the app on their mobile device, how can they provide feedback on it and more importantly, why should they even care? PreApps attempts to solve this issue by targeting the app enthusiast. People who take pride in being the first person among their friends to know about new apps.

But just being one of the "cool kids" might not be enough to get app users to participate on the site, so PreApps also gives points for every action taken. Here is a list of the points that users can earn.

They can redeem the points for rewards, such as gift cards to the Google Play Store, Amazon.com and more. They can even sign up to be notified when an app is ready to be downloaded or they can take part in the beta testing process.

From A Developer's Perspective

Now that you know how potential users participate on PreApps, it helps you better understand how it can benefit you as a developer. Now let's take a closer look at what the site can do for you.

If your app is just an idea at the moment, you can post it on the App Ideas page. Users vote ideas up or down and the apps with the top net positive votes rise to the top of the list. If your idea gets a lot of votes, this may be an indication that there is a market for your app and you should move forward with development. Posting your idea can also attract the help you might need to get your project off the ground. 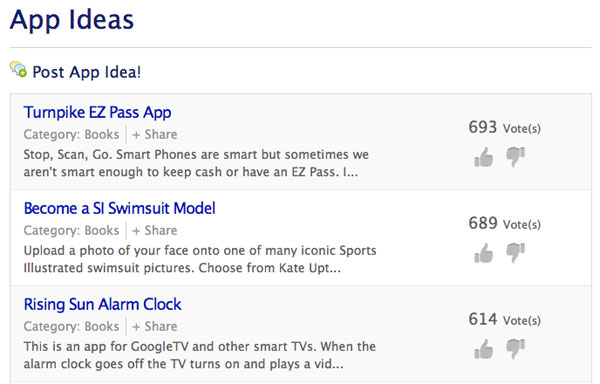 If you are a little further along in the development process and have an app icon, at least one screenshot and an expected final release date, you can post your app in the appropriate category and users can vote for your app, provide feedback via comments, sign up to receive a notification when your app is published and sign up to be a beta tester. 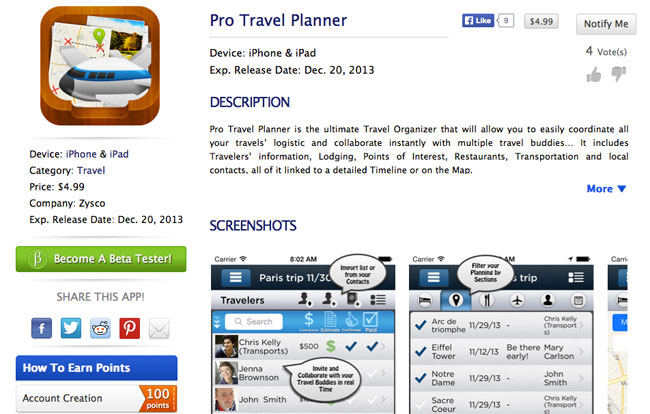 As you can see from the screenshot above, this has a similar look and feel to the Apple App Store. You can also include an app demo video and ask users questions via polls, which are nice features. 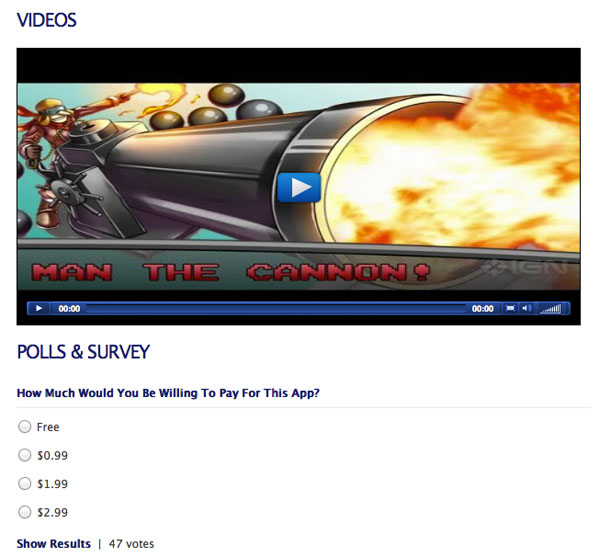 Even after your app has launched, PreApps continues helping your market your app by adding it to the Hall of Fame section on their website.

Although PreApps does have a free plan, you will have to pay if you want to get some of the extra features on the site. Currently, upgrade packages are a one-time charge of $24, $49 or $99, depending on what kind of upgrades you want. These upgrades allow you to do things such as add polls and contact beta testers.

After your app is launched, PreApps probably isn't going to provide a whole lot of additional downloads. The reason is that if someone wants to download an app that has already been launched, PreApps asks for their email address. This is probably a turn off to the average app user, who may or may not go to the app store on their own to download the app. 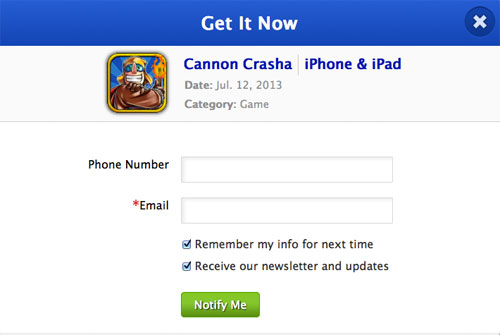 As we looked through the feedback for each pre launch app, there was some good feedback, but it was sparse and there were a lot of comments that just seemed like spam. To improve this feature, PreApps may want to require a minimum number of characters for each feedback left, similar to what Yelp does, and not allow anonymous comments.

However, PreApps provides some obvious potential benefits to developers. The site attracts the type of people who would be willing to put in the time and effort to review and test apps that are not finished yet and incentivizes them with points that can be traded for rewards. The notification feature is a great way to have an interested audience waiting for you as soon as your app launches.

Aspiring developers can add their app idea to the App Ideas page to get feedback from potential users and attract members that they need for their development team. The number of votes that they get for their idea can also help them assess the viability of their idea.

PreApps allows you to promote iOS, Android and Windows Phone apps, so it is a nice one-stop shop for all the major mobile platforms. Their website is pretty easy to navigate, with all of the primary pages in the menu bar at the top.

But the bottom line question, is does PreApps help developers promote their app before it is ready for launch? There are a lot of variables that will contribute to the successful launch of an app, but let's take a look at a couple of examples.

According to the testimonials on their Success Stories page, we can see that PreApps has helped several developers with their pre launch app marketing. Two of the top examples, Overkill 2 and Chuck the Muck are both available on iOS, so just out of curiosity, let's check out their App Profile pages to see how they are doing after their launch. 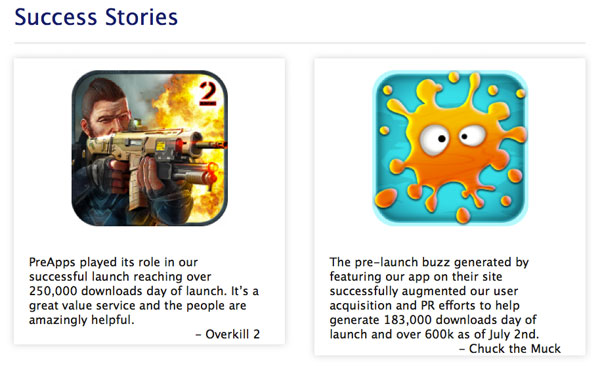 Overkill 2 is doing pretty well after their launch. It is updated frequently and has thousands of positive reviews. 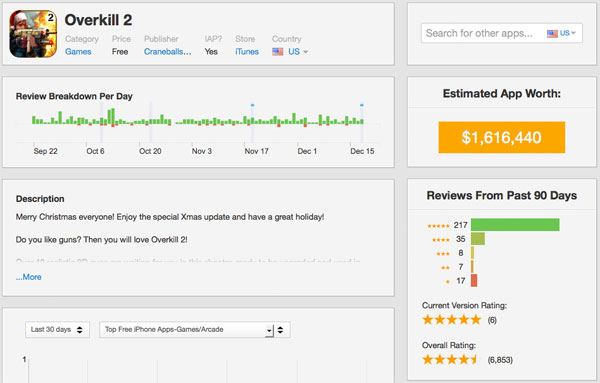 Chuck the Muck on the other hand, seems to have started strong, but since their last update was on 6/13/2013 and they haven't had a review in awhile, we can assume that the game has not been given the continual attention that it needs to be a success. Again, we do not know all of the promotion methods that they used before and during their launch, but we can assume that PreApps did have a positive effect on the number of downloads of the app when it was first launched. 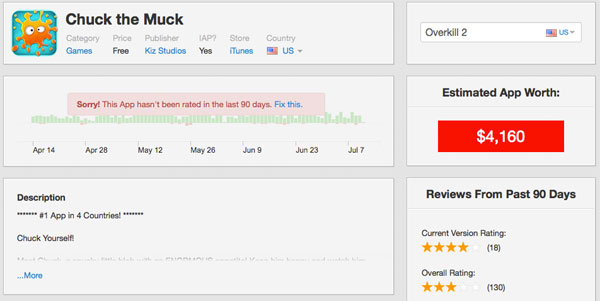 PreApps has come up with a good idea for helping developers promote their apps before their apps are even published. Just like anything else, you will have to evaluate it for yourself and see if it might work for your situation.

Keep in mind that this is just one strategy that you can use to promote your app. But as we have seen in our examples, to make your app a long-term success, you need to use multiple promotion strategies and update your app often to keep users engaged.

If you have tried PreApps before, what did you think?