Google updated their Android Developer policy guidelines late last month to ban the use of testimonials on Google Play. In this post, we will examine if banning testimonials really affects ASO and what can happen if you get caught using them. We will also examine how you can still use testimonials in app marketing and what you have to avoid when doing so. 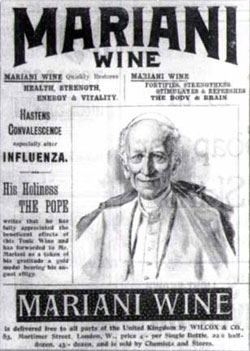 I'm sure that testimonials have been used for as long as goods and services have been traded. Here is a fun one that I found on Wikipedia showing the Pope endorsing a wine. Since testimonials are such powerful marketing tools, they are often abused.

In 2009, the Federal Trade Commission (FTC) updated its truth-in-advertising guidelines to crack down on fake online testimonials. Big fines are handed out to anyone who violates these laws.

Therefore, it is no surprise that Google has also taken steps to crack down on false testimonials in app descriptions. But there is another reason why Google banned testimonials.

Google has also banned testimonials in app descriptions because they say:

So it seems like the biggest issue, from an ASO standpoint, is that people were using fake testimonials to do keyword stuffing. You can read more about their guidelines on this page. Here is an example that they give.

This brings us to the question, is not having testimonials in your app's description going to have a big negative impact your ASO? Let's take a closer look.

Will It Have A Big Impact On ASO?

No, it won't have a big impact.

A small one? Possibly.

When utilized above the fold in your app description, testimonials can be the final straw that convinces people to download your app. But not having testimonials isn't a huge deal either. There are certainly more important ASO factors such as having keywords in your app's title, downloads, reviews and user engagement.

So even though you can't include testimonials anymore, you can still write a great description. This includes good copywriting and including the right keywords.

If a publisher wants to stuff keywords into the description, they certainly don't need to use a testimonial to do it. But of course, anyone who does this risks the fallout of their actions.

If you are currently using testimonials in the description of your Google Play app, be sure to take them out immediately. The penalties can be swift, as we have seen with other Play Store violations.

You can read about some publisher experiences here. Google usually gives you three strikes before they ban your developer account. But in this example, since there were two versions of the same game, the first strike actually counted as two strikes.

So don't take any chances. Once you are banned, there is no going back.

Where You Can Use Testimonials

But if you really do have excellent, legitimate testimonials, then how can you prevent them from going to waste? You can still use them on your app's website to get people to visit the Play Store and download your app. Just be sure to follow the FTC guidelines when it comes to using testimonials, especially when results are involved.

Another way that you can add testimonials to your website is to use our free widget. Simply copy and paste the code into your site and you can show off your positive Google Play reviews. 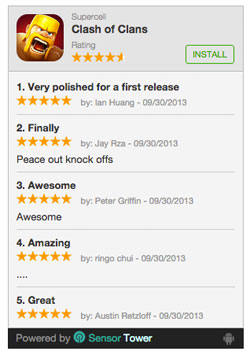 Yes, shady app publishers will always try to game the system by creating fake Google+ profiles and leaving fake reviews. But that is a lot harder than just including a fake testimonial in the app's description. Since removing testimonials doesn't affect ASO much, not allowing testimonials can only be seen as a positive thing for both app users and the Google Play ecosystem in general.

Many people have argued that Google's method of getting keywords from the description of an app is a much better way to identify keywords because it is more organic. But Apple's method of limiting the keywords of an app to 100 characters does have its merits too. In this case, it limits the amount of keyword spam that can be added to an app. Regardless of which one you think is better, be sure to comply with Google's new rules.

Is it better to have a 100 character keyword field or have the app store pull the keywords from the app's description? Why or why not? Let us know in the comments below...