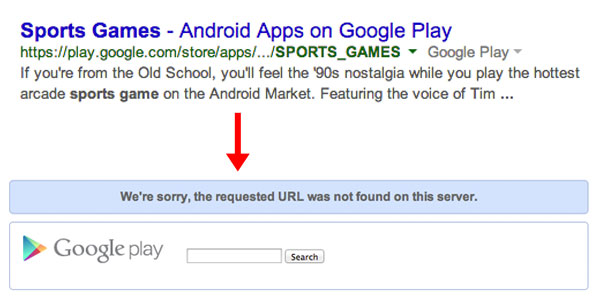 Google changed some of the categories in the Google Play Store today, a change that is so recent that even Google web search is still catching up. As you can see from the screenshots above, when you search for the SPORTS_GAMES category in Google web search, it still leads to the old category link, which has been removed.

Search will undoubtedly catch up and it may already have by the time you read this. But the more important question is: How does this affect app developers who have apps on the Google Play store? This post will tell you exactly what Google changed and what to look out for.

How This Affects Android Developers

If you have a game on Google Play and were not aware of this change before today, you should double check the category that your app is currently in. This may not affect some games, but it will make a difference to others.

It is also important to note that this change only applies to games. Other app categories have not been affected.

Probably the biggest area of potential issues is the automatic categorization of apps that were previously in categories that had two combined subcategories. If you did not change your app category before this update, Google will automatically put your app into these default categories.

So if this may be the case for you, we recommend double checking the category your app is in, to make sure that you are not losing downloads because you are listed in the wrong place.

Google has also expanded the list of available categories from 6, to a total of 20. This is actually 2 more than they mentioned in their blog post announcing the change, back in December of last year. Here is a list of the new categories.

So if there is a new category that better describes your game, it would benefit you to move your app over to the new category as soon as possible. If there aren't too many apps in these new categories yet, you may benefit from less competition, at least in the next few days.

They will be introducing new features in games like: game gifts, multiplayer invites and expanding multiplayer support to iOS. Google is also updating their Unity Plug-In to support cross-platform multiplayer services, in addition to introducing Play Games C++ SDK support for leaderboards and tracking user achievements.

Do you think that expanding the number of categories was a good thing? Does Google need to create even more categories? Let's hear your opinion, leave a comment below...