Now that Apple Watch has officially launched, there are dozens of reviews of the new device online. We are not going to explore how good or bad the watch itself is, these other sites do a great job of that.

Instead, we are going to examine the Apple Watch from an App Store Optimization perspective. If you don't have a Watch enabled app yet, this post will show you how to get started with ASO and a present a few of the current opportunities.

Apple Watch enabled apps are listed in their own store. This is great news because it helps with app discovery. The App Store is already overcrowded and starting with a clean slate gives more apps the opportunity to be found.

There currently just over 3,000 apps on the Watch Store. This means that keywords that have been really difficult to rank for have suddenly become much more accessible.

For example, the keyword "war" has a Difficulty Score of 6.5 out of 10 on the iPhone, making it a fairly difficult keyword to rank for on the App Store. When someone does a search, there are over 14,000 competing apps.

But if we do a search for "war" on the Watch App Store, there are only seven. No complex keyword strategies needed here. If you have a war related app that can be used on a watch, just get it out there.

So if your app could be used on an Apple Watch, it is important to make it Watch compatible as soon as soon as possible. Even if you are just providing notifications to the Watch, it can help you stand out and get more downloads.

Since an Apple Watch must be paired with an iPhone to work, the Watch app also shares much of the metadata with the iPhone app. Keywords, app title and Preview Video are all shared between the App Store and Watch Store listings.

Since keywords and titles are shared between the two stores, it adds another dimension to keyword optimization. We may see scenarios where apps are optimized primarily for the Watch App Store.

But there are some metadata elements that are specific to the Watch app. Here is what you need to know...

The app icon for an Apple Watch app must fit into the circular icon design that shows up on the Watch. It must also be visually similar to your main app icon, so people know that they are related.

This means that you may have to redesign your main app icon, in order to have a design that would also work for a Watch app. It doesn't have to be exactly the same, but they must be related.

Unlike app "bundles," adding "Apple Watch" to your keywords or app title will not be allowed. If you want to let people know that your app works with Apple Watch, you should mention it early in your description and in the What's New section.

This was an exception. Notice how much easier it is to see the reasons why someone might want to play this game. 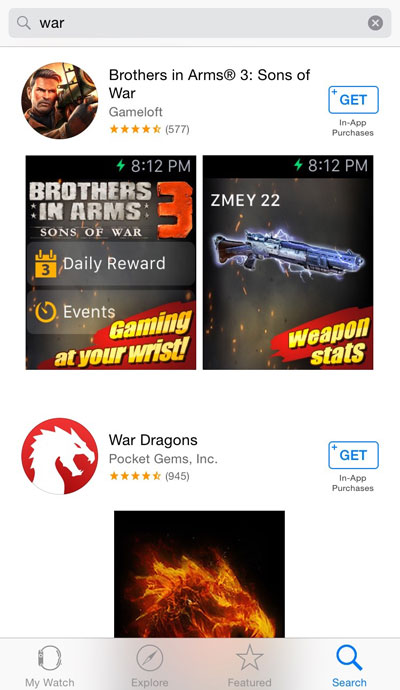 One of the main criticisms of the Apple Watch is not so much the watch itself, but the apps that are currently available. This is understandable, since this is a brand new product.

App publishers don't have enough in-depth data to really understand how people use the device yet. So the more thought and research you can put into your Watch app, the more likely you will be able to establish yourself in this new market.

Since no amount of ASO will make a terrible app successful, it is important to take some time to think through how people will interact with your app on a Watch. You are not putting an iPhone app on a watch. The goal is to create a bite-sized interaction, nothing more.

The Smartwatch market is currently a very small compared to the market for Smartphones. Even if you rank well for a keyword, it probably won't have the same effect as ranking well for the iPad or iPhone...at least not yet.

But now that Apple is in the Smartwatch game, demand should increase. So take some time to figure out if a WatchKit app, Glance or Notification would be the best way to take advantage of this new device. It can help you establish yourself before other publishers catch on.

What do you think of the Apple Watch? Let us know in the comments below...