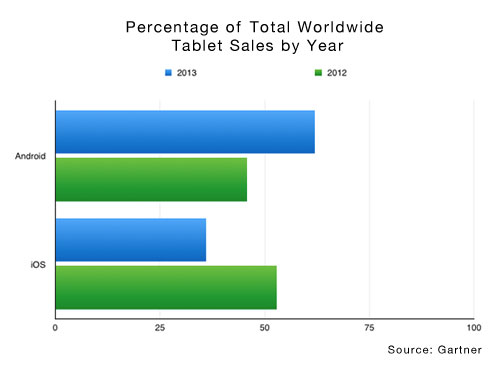 If you want to get the most number of users, then Android is clearly the way to go. iOS will probably produce more revenue, but for sheer reach, the Google OS dominates.

However, this comes at a price. As a study by OpenSignal Maps shows, there are about 4,000 different Android devices. These low cost devices make Android appealing to the masses, but can be a nightmare when it comes to making sure that your app works correctly on every single device. Add the number of different Android versions still in use and you have a ton of possible combinations.

Since your rank on Google Play and your general reputation are on the line, it is important that your app works very well on as many devices as possible. But where do you draw the line?

Instead of losing sleep over how you are going to find 4,000 devices on eBay (much less pay for them), this post will show you how to reduce the number of devices that you target. Obviously, the more devices you can make your app compatible with, the better. But we will help you find the balance between compatibility and your testing resources.

The best place to start is to look at Google's stats on which platform versions are the most used. As of May 1, 2014, this is the distribution of devices using the following versions.

Keep in mind that after September 2013, older versions of Android aren't supported by the new Google Play app, so no data is available. However, Google feels that the following information is the best estimate of current users. 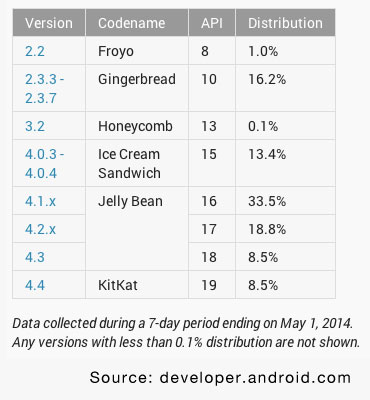 Based on this information, you may choose to only support Ice Cream Sandwich or newer, since that accounts for 82.7% of the devices out there. How far back you want to go is up to you and will depend on the type of app you have, but looking at this information is the a good way to begin eliminating which devices you want to make your app fully compatible with.

Just keep in mind that if you do choose Ice Cream Sandwich as your base compatibility level, devices with older versions of the OS will suffer and probably lead to bad reviews. So even if you think it is a good idea to only support newer versions, you should test your assumptions on a couple devices with much older versions to see how much the user experience suffers.

You can get up-to-date information on the Google Play Dashboards page.

The next criteria you should look at is which screen resolutions you want to support. This depends a lot on the type of app you have.

For games with detailed graphics or apps with a lot of text, you probably don't want to support a screen resolution that is too low. In these cases, you may choose to only support a minimum of 800 x 480, which is the resolution of higher end devices. If you do this, be sure to make it clear in your app description that people should test their device first.

Otherwise, having a few test devices with the most popular screen resolutions is a good start.

If you still need to reduce the number of devices that you want to support, you can look at targeting specific manufacturers or even popular individual devices. Upon reviewing the OpenSignal data, we see that unsurprisingly, Samsung is the clear winner.

According to the study, they account for 40% of all the Android devices out there. It is generally better to concentrate on targeting versions and screen sizes, but this can also be considered. 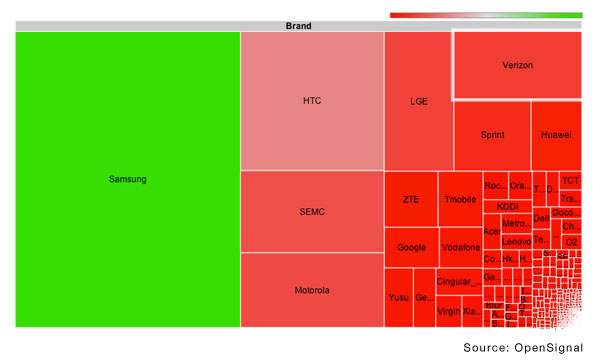 Using third party testing services can also be a big help in expanding the number of devices that you have access to test on. Services like AppThwack or these services can help a lot.

These tips are a good starting point, but it will ultimately come down to what your users are using. So be sure to review your analytics reports to see if there are specs that you need to be supporting. Looking at your reports is more reactive than proactive, but making sure that your current user base is happy will allow you to establish a foundation that you can expand on.

So if you are worried about how to properly test your Android app, we hope that this post has given you a few good tips on how to reduce the number of devices you test on. It will still take some time to do proper testing whenever you do an update, but hopefully this will streamline the process.

How do you deal with Android fragmentation? Let us know in the comments below...