This week, Sensor Tower continues to put Google Play under the magnifying glass to help developers navigate Android ASO. Today, let’s take a look at our findings around keyword rankings, particularly when it comes to an app’s title.

A Glimpse Into Our Process

Our study looks at Android apps ranking in the top 100 positions for 14,000 different keywords. In total, the sample set includes data from over 550,000 apps in the Google Play store.

It’s important to note that this particular study is a correlation analysis, which means we are using a broad data set to determine trends in relationships. While the data doesn’t define direct causation, these graphs will help identify potential strategies to test during your next update.

Including Keywords in the App Title (Google Play)

We are often asked, “What type of increase might I see by adding a keyword to my title?” Let’s take a look at what the sample set shows us. 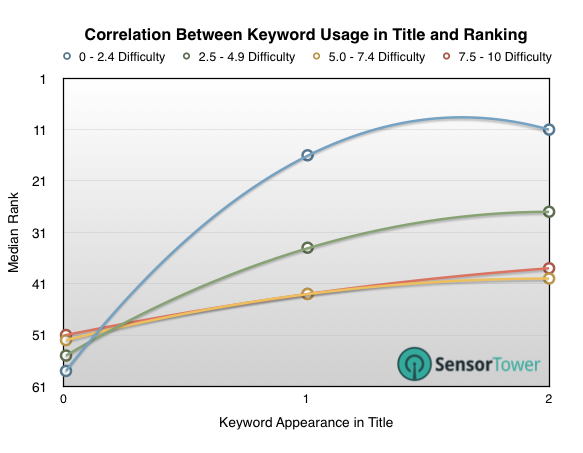 As you can see, considering a keyword’s difficulty score is very important here. Our difficulty score ranges from 0-10, and measures how challenging it will be to rank in the top ten positions for any given term.

We’re also frequently asked, “If adding a keyword to the title once is good, would twice be even better?” Not necessarily. Adding a term to your title once might double its ranking, while repeating it will have a much smaller impact. Since character space is limited, sacrificing this prime real estate may not be your top priority.

Keyword density plays a big role in creating an Android app’s description. But what about your title? Consider the graph below. If we place a keyword in the title, and then add additional characters, what happens to its ranking? 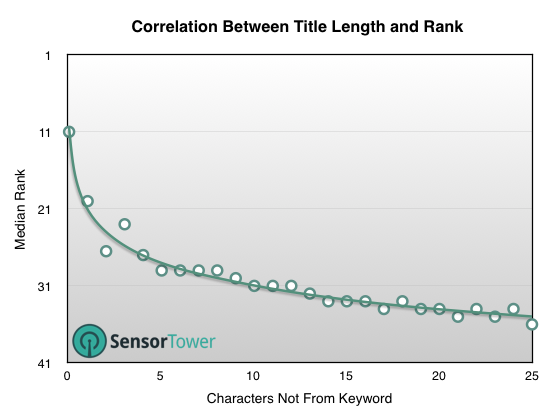 As seen in the graph above, apps with lower keyword density in their titles rank lower. In other words, the more characters you have in your app title that are devoted to keywords, the better. Characters that aren't keywords only serve to diminish your rank. For most new apps, it’s crucial to add several keywords to the title in order to increase visibility. But keep keyword density in mind as you grow, particularly if you want to try increasing your rank for an individual term.

The last thing I’ll touch on today is positioning your keyword within the app title. Apps in this study had titles containing two or more keywords. Our final graph shows how many characters preceded a keyword, and its corresponding rank. 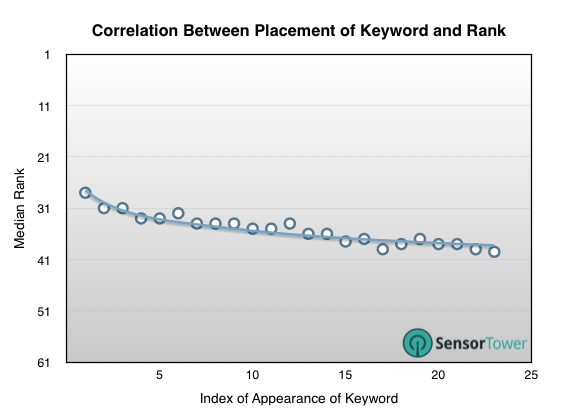 Placing a keyword towards the front of your title can have a minor impact on its rank, so keep this in mind when structuring phrases.

That was a lot of data! In summary, we learned:

The next post in this series will explore the relationship between keywords and app description. And if you've ever wondered about the impact app ratings can have on your keyword rankings, we'll be covering that as well!

Jump to Part 2 of this series.

Jump to Part 3 of this series.