With the holiday shopping season in full swing, and Apple's long-overdue debut of a Shopping category on the App Store earlier this month, we figured it was the perfect time to turn our analytical eye towards the performance of shopping apps on the Apple App Store. Specifically, we looked at downloads of apps published by the top U.S. retailers by revenue according to the National Retail Federation (NRF), comparing the same period in early November 2014 and 2015.

The result: While a few retailers have seen marked improvement in user acquisition on the App Store since this period last year, the majority have actually experienced negative growth.

We only apps which enable users to purchase goods in-app were included, and we excluded food/grocery/office supply retailers, plus any retailers who didn't have an app published on the App Store during the 2014 period for comparison. In the case that a retailer has separate apps for iPhone and iPad, these download estimates were combined.

You can see the full list of apps we analyzed in the table below.

If there's one major takeaway from our analysis, it's that a majority of the top U.S. retailers appear to be facing an uphill challenge when it comes to user acquisition. In fact, only eight of the 24 apps we looked at showed positive growth compared to the same period last year: 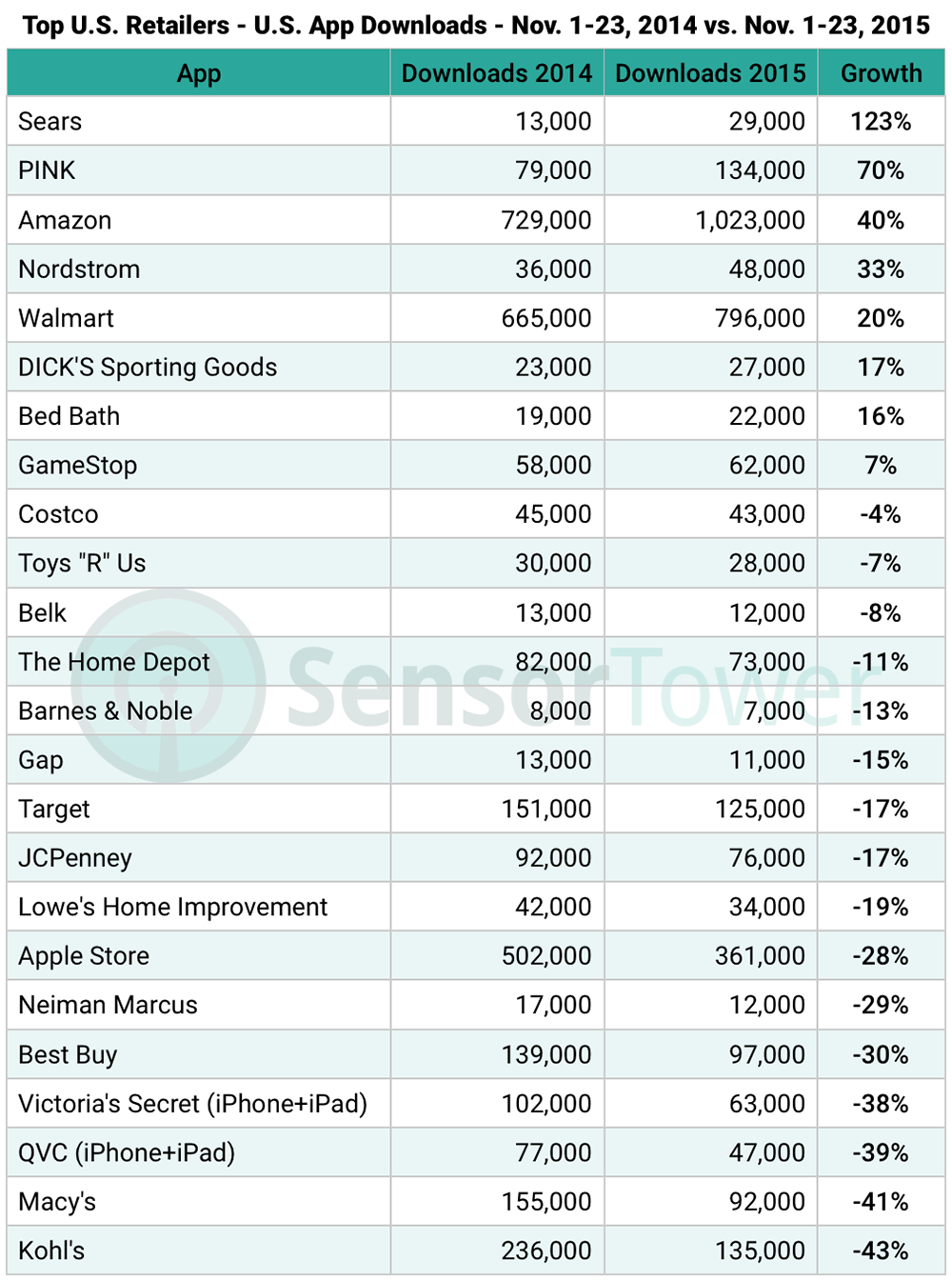 Amazon and Walmart, which both rank in the U.S. retailer top 10 according to the NRF at No. 9 and No. 1, respectively, were among the retailers whose apps showed growth this year, but other notables from the NRF Top 10 did not. Case in point: Walmart's chief rival, Target, which actually saw its downloads during this period drop by 17 percent over last year.

Target launched a companion app for iOS, Cartwheel by Target, in mid-June of this year. It's worth noting that Cartwheel, which is focused on coupons and discounts for use at the retailer, significantly outperformed the core Target app in the U.S. during the period we looked at to the tune of 244 percent more downloads.

The real winner this year was Sears, which the NRF ranks at No. 18 nationally. Downloads of its app grew 123 percent over the same period in 2014, from nearly 13,000 to nearly 29,000. Our App Intel platform revealed a ranking jump from No. 125 to No. 31 for free iPhone apps in mid-November following an update introducing free shipping for products ordered in-app while in a Sears store and a tie-in sweepstakes with "Wheel of Fortune", two tactics aimed squarely at acquiring new app users—with clearly beneficial results.

That said, 13 of the apps we analyzed saw double-digit declines in downloads year-over-year, most notably Macy's and Kohl's. Adoption of both department stores' apps dropped by more than 40 percent versus the same period last year. Other noteworthy declines were posted by tech-focused retailers Apple and Best Buy, at 28 and 32 percent reductions, respectively, in addition to the aforementioned Target.

Shopping Category to the Rescue?

One clear trend that emerged when looking at this same group of apps prior to November is that their combined year-over-year downloads have been on a decline for some time. In fact, September 2015 versus 2014 saw an 8 percent YOY decline, while the decrease between this October and last was 18 percent YOY.

Early indications suggest that the Shopping category may be helping some of the apps, most likely through increased visibility now that they're no longer competing directly with lifestyle apps for discovery (and perhaps user interest in the shiny new category). In fact, the chart below shows combined downloads for our 24 apps on the upswing following the category's launch on November 5:

That said, while some apps we analyzed have indeed seen an acceleration of growth since that date—Amazon and Walmart in particular—many are still tracking below where they were during the same 23-day period in 2014.

We'll revisit this topic once the holiday shopping season concludes to provide an update on how these retailers fared further out from the Shopping category's debut. For now, however, it's safe to say that for many of them it's been a subdued start to the most important time of year for retail on the user acquisition front.