ByteDance’s TikTok, including Douyin on iOS in China, was the most-downloaded and highest-earning non-game app in the world in the first half of 2022. It also has one of the most engaged user bases among social networking apps.

According to the Power User Curve—the latest feature in Sensor Tower’s Consumer Intelligence analytical toolkit—TikTok has the second-most engaged user base when compared to its competitors, with 29 percent of its active worldwide Google Play installs opening the app every single day each month in Q2 2022. 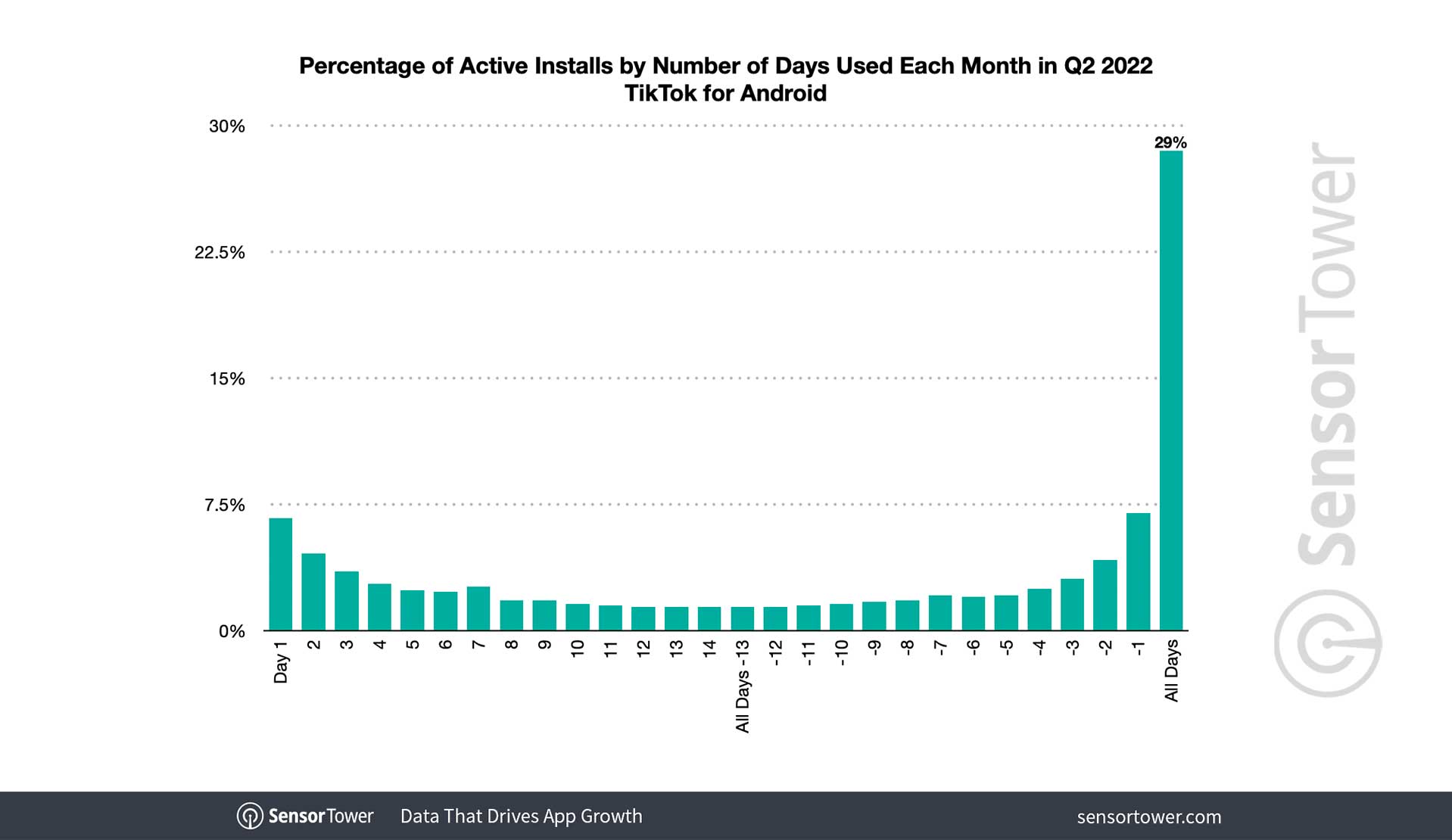 Our analysis found that Instagram was the global engagement leader, as about 39 percent of its installs were “power users” who engaged with the app every day last quarter. This was 10 percentage points higher than TikTok, which saw the second most power users at 29 percent of its active installs.

Fellow Meta-owned social platform Facebook came in for a close third with 27 percent of its installs reflecting power user behavior, with Snapchat on its heels at 26 percent. Twitter trailed with approximately 18 percent. 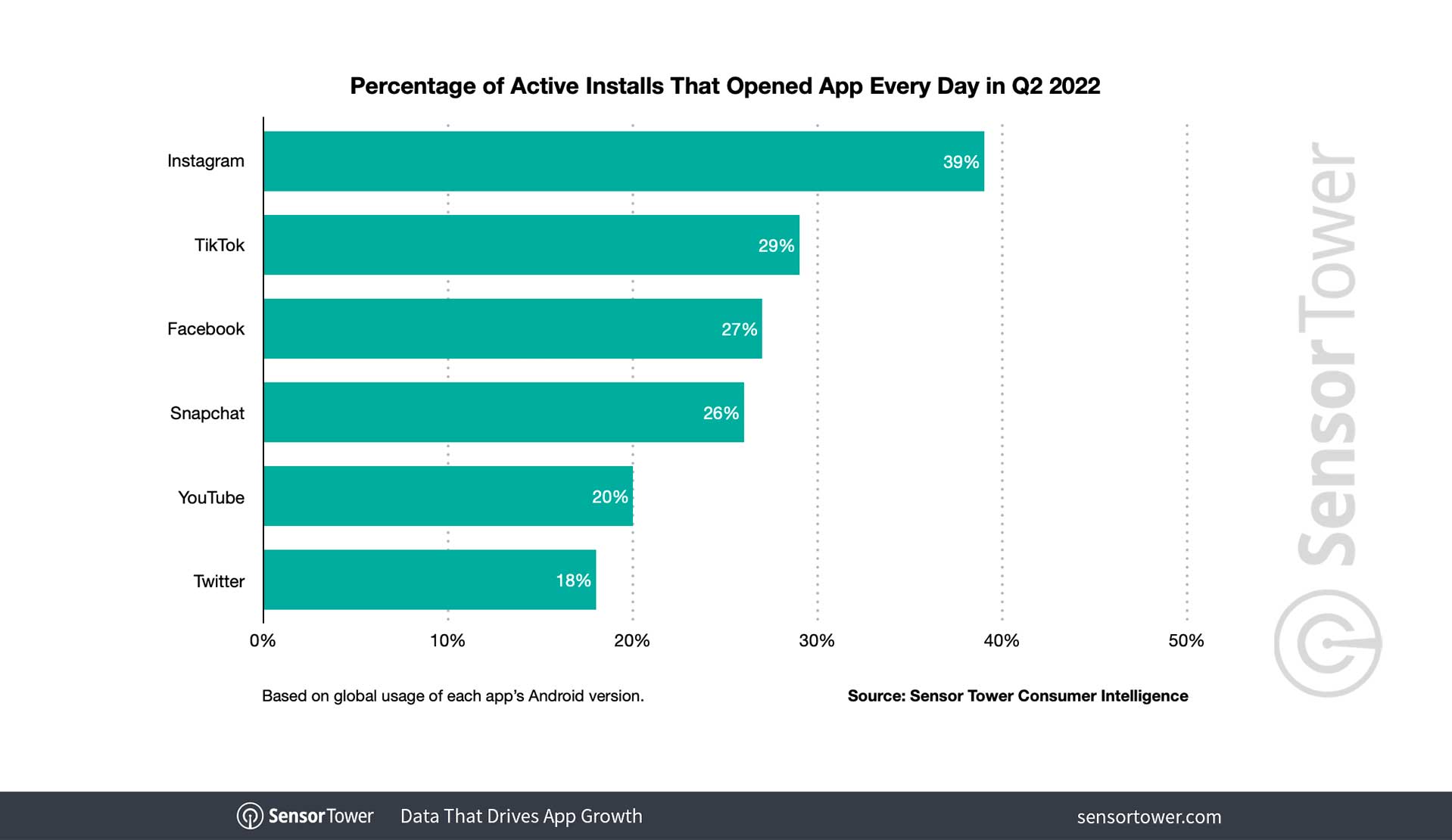 Although YouTube isn’t strictly a social network, it functions similarly to Instagram and TikTok by providing a platform for live streams and videos on demand. According to Sensor Tower’s Power User Curve, 20 percent of YouTube’s mobile installs opened the app every day in 2Q22, trailing TikTok by 9 percentage points and Instagram by about 19 percentage points.

Use of TikTok Averages More Than 1.5 Hours Each Day

While Instagram came out on top in terms of the average number of power users who opened its app daily in 2Q22, TikTok led the pack when it came to time spent. Globally, an average of 95 minutes were spent in TikTok per day last quarter. This was more than four times the average duration spent on Snapchat (21 minutes), over three times the time spent on Twitter (29 minutes), and nearly twice as much as Facebook (49 minutes) and Instagram (51 minutes). 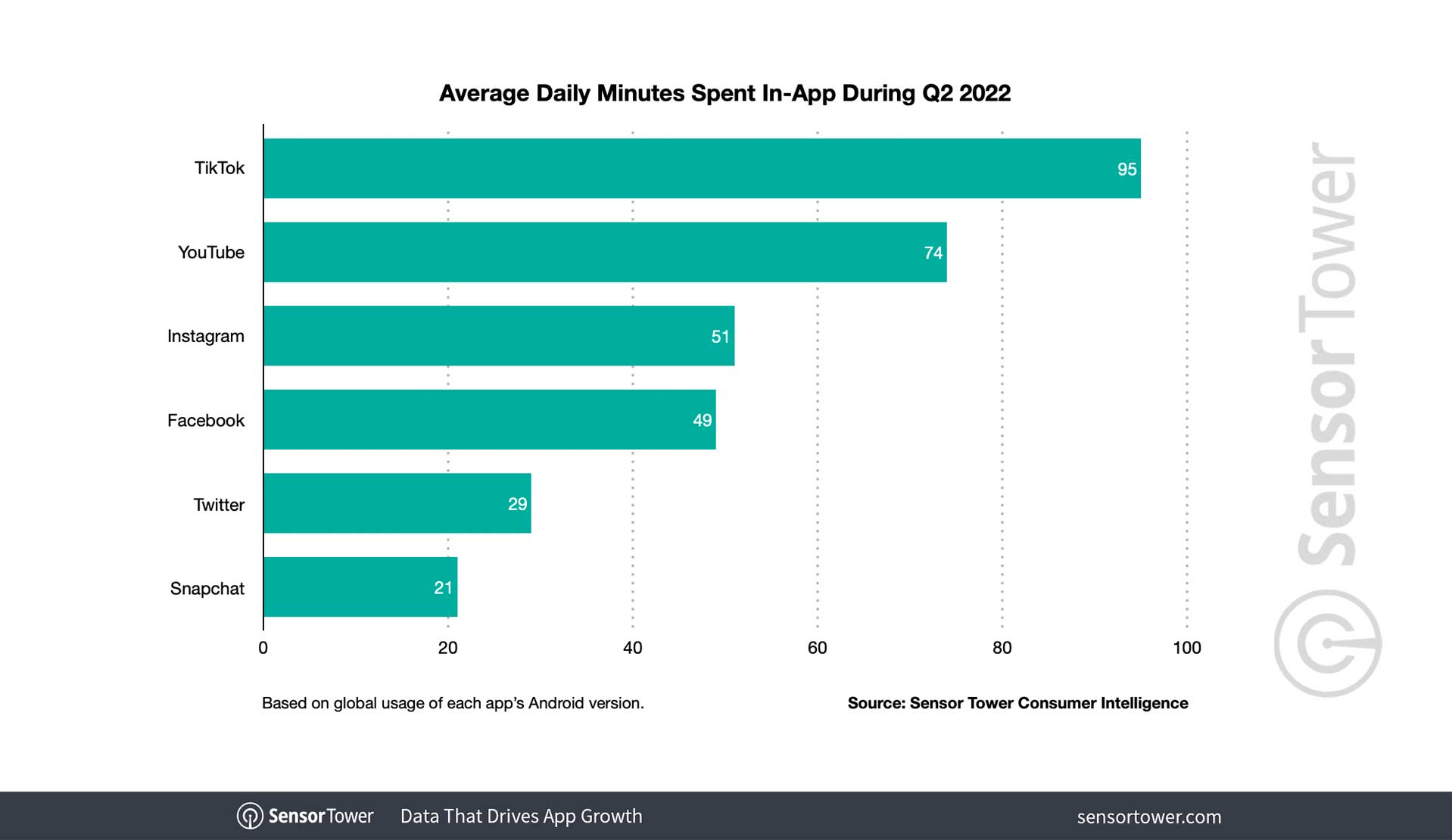 TikTok In the Crosshairs Again

TikTok is once again challenged by proposed government action that would block it from app stores in the U.S. The app has proven resilient in the past when it was removed from its largest market, India, and went on to become the first non-Meta app to reach 3 billion worldwide installs.

However, a removal from the App Store and Google Play in the U.S. could have a greater impact on ByteDance’s business operations as it is TikTok’s largest market in terms of revenue after China, representing about 19 percent of spending in the first half of 2022. U.S. consumers spent about $322.6 million in the app in H1 2022, up 398 percent Y/Y from $64.8 million.