If you have ever published an iOS app and wondered why your keyword rankings dropped a few days after your app was launched, then this post is for you. We will tell you why this happens, show you examples of this phenomenon and share what you can do to take advantage of it.

Before we get started, it is important to note that apps that primarily rely on organic downloads will be most affected by this. If a publisher has a big marketing budget to spend on ads, then the seven day launch window will have a much smaller effect on downloads.

After an app is launched, Apple gives all new apps a boost. In the first seven days, an app will rank much better for its keywords than it normally would.

Since the Apple ranking algorithm is a secret, nobody knows how keyword rankings are determined in these first seven days. Nobody knows exactly why Apple does this either.

Presumably, Apple just wants to welcome new apps to the App Store with a boost in keyword rankings and downloads.

To illustrate this point, let's take a look at two real examples. We won't reveal the names of these apps or the keywords because it really doesn't matter. The important thing is to see that this does happen and that it affects several of an app's keywords at the same time.

This app was launched on July 17, 2014. In this first graph, we see the a textbook rise and an immediate drop seven days later. The app actually ranked in the top 10 for a few days, before settling into the #40 to #50 range.

Here is another keyword from the same app. After an initial rise into the top 10, the ranking for this keyword drops below #50.

This app was launched on August 8, 2014. But it did not start ranking for some keywords until a day or two later.

The app's ranking for this first keyword started out at #26 and peaked at #23. Then the ranking tanked, forming a range at about #100. 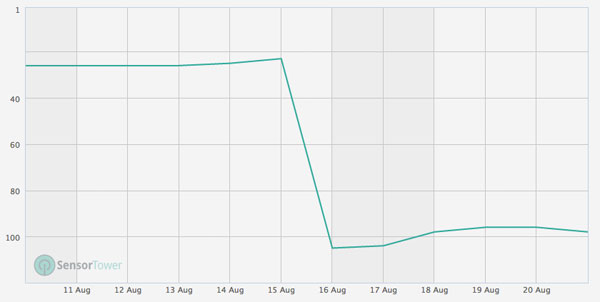 That wasn't the only keyword that suffered a crash. Another keyword actually saw a bigger dip, going from a high of #28 and ending up in the #260 range. As you can see, the chart patterns are almost identical.

One important thing to note is that these drops didn't happen in exactly seven days. This is due to the fact that both keywords didn't start ranking right away.

How To Take Advantage Of The Boost

Now that you understand how this works, how can you use it to your advantage? Since there is only a seven day window, this is obviously not a long-term solution that will result in millions of downloads.

But if you did want to optimize your launch, here is what you could do. It would come down to careful prelaunch keyword research.

If you have been following this blog for awhile, then you know how to choose the right keywords for your app. If you don't know how to select keywords, be sure to read this guide.

Then, it would be important to have a second set of keywords ready for after the seven day period. These keywords would have Difficulty Scores that are as low as possible to maximize ranking.

Of course there is no guarantee that your keywords will rank really well in the first seven days. But being more ambitious with your keyword selection in the beginning and being prepared for the crash, could give you a slight advantage over publishers who don't understand this.

Ranking well for keywords usually increases downloads during the first seven days after the launch of an app. Some people call this the Seven Day Cliff. Whatever you want to call it, this happens to all apps.

Be prepared for the first seven days. You will give you good shot at getting off on the right foot and not be caught off guard after its rankings drop.

How do you take advantage of the initial boost in rankings for new apps? Let us know in the comments below...