In the lead-up to Monday's WWDC 2017 keynote, app makers and marketers were expecting the big news to be the unveiling of iOS 11. While we certainly got that—and the various additions it will introduce, including native AR functionality—the biggest revelation of the presentation was unquestionably the announcement of a full redesign for the App Store itself, due to arrive alongside iOS 11 this fall.

After digesting Apple's official take on the redesign's goals and benefits for both users and developers, and spending some time with the iOS 11 beta ourselves, we've summed up our key takeaways (and unanswered questions) in this post.

Editorial Curation: Key to This Redesign and Greater Discoverability

Most of discussion with regard to the redesign thus far has centered around the visual and structural refresh, but we consider the expanded focus on editorial curation to be an even more significant advancement for the App Store. Featuring and the singling out of apps as Editors' Picks or App of the Week have been of huge interest to app marketers due to the potential they have to drive a considerable amount of traffic to their app product pages, but with iOS 11 the concept of "featuring" will take on an entirely new and more significant scale. 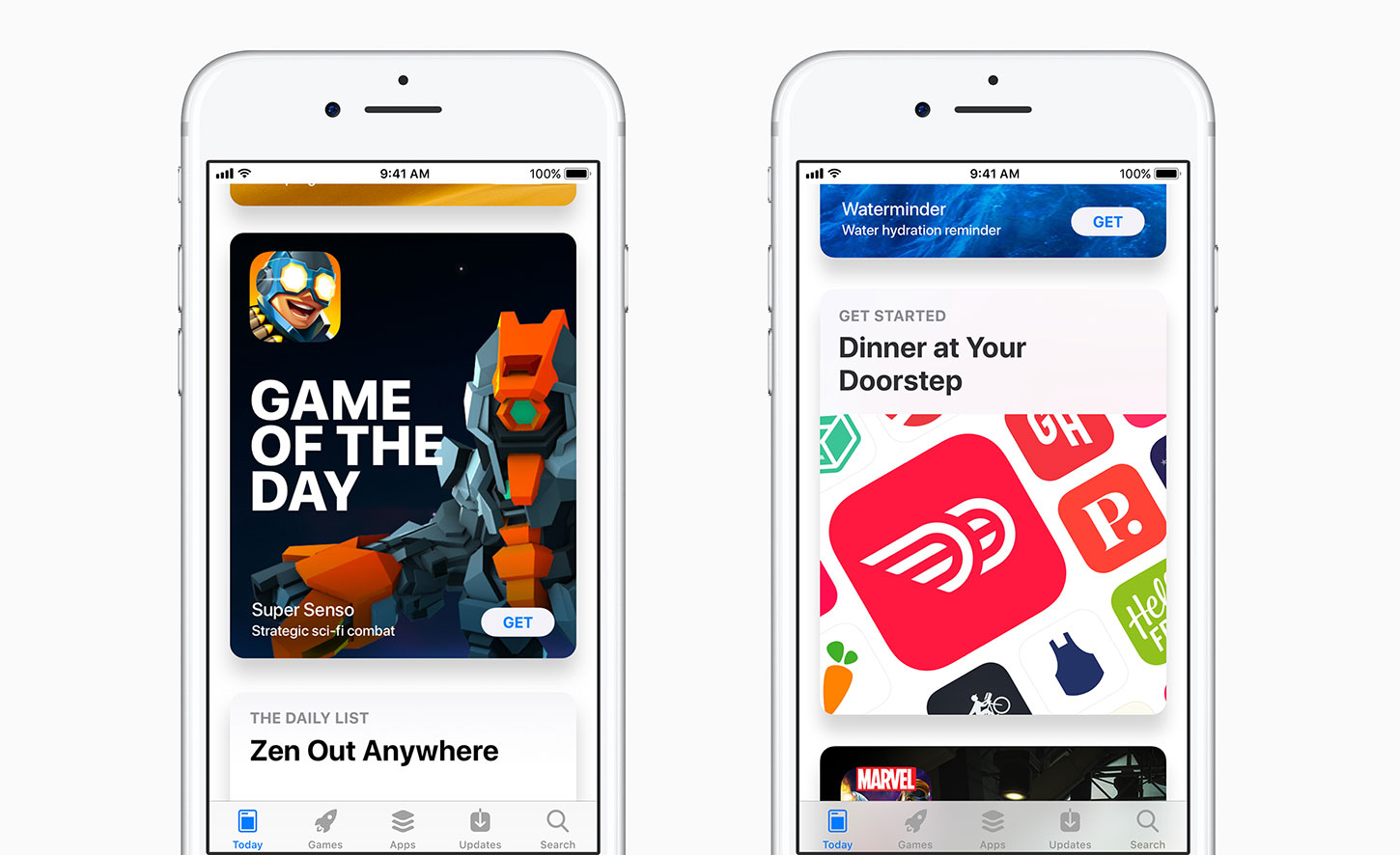 Just as music, movie, and video game reviewers have become the vanguards of what's hot and worthwhile in those mediums, the front-and-center focus on Apple's App Store editorial team recommendations will make their opinions and curation of apps infinitely more important to app discovery and user behavior. Editorial curation is a huge factor in determining the "next big thing" in other content markets, and while social media, YouTube, and other influencer-heavy channels have diminished the role of traditional editorial somewhat in defining what's hot and what's not, the impact it can still have on the success or failure of an app can't be ignored—especially when the editorial team's content will be the first thing users see upon opening the App Store.

It goes without saying that, given this shift, working with Apple's App Store editorial team to secure coverage will be even more important for publishers going forward. Hopefully, the increased presence of editorial content on the App Store will mean Apple's editorial team will have more space to fill on a daily basis (with elements such App of the Day in both games and non-games, versus an App of the Week, to promote every 24 hours) which would result in more opportunities to secure coverage across the board.

The Biggest Changes (As We See Them)

Staying on the subject of editorial, the iOS11 redesign will see this content brought into search results along with individual in-app purchases related to the user's search terms. Additionally, App Store search will now include autoplaying videos, based on the first of three possible videos on a app's product page, if one is available. This could potentially have a significantly positive impact on conversion from search to install, as users will be able to get a much better sense of what an app or game is about without even having to tap through to the product page. Of course, this will also require publishers to ensure that their app videos are as compelling and descriptive as possible to encourage that conversion—or at least a visit to the product page to learn more. 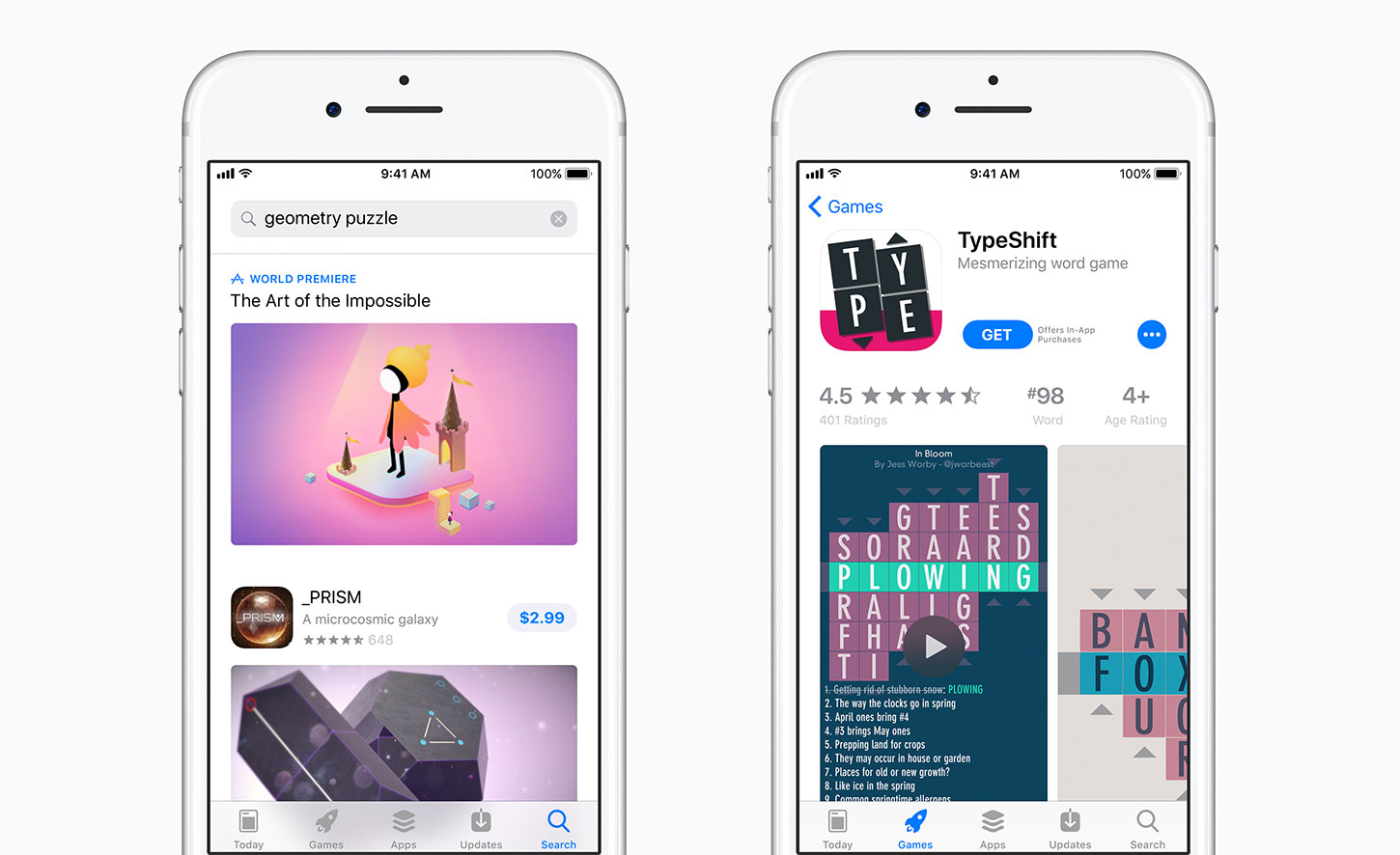 Also related to search, app names are undergoing yet another truncation, from 50 to 30 characters. Apple reduced the maximum number of characters in app names from 256 to 50 last September in advance of iOS 10's launch in order to cut down on spammy titles, something this latest move seems intended to take a step further. Thankfully, Apple will also introduce a new 30-character subtitle for apps, visible on the product page and in search results, which will enable publishers to tout the functionality of their apps a bit more.

Another standout added feature on the developer side is the ability to choose whether or not to reset app ratings with each version update. As most are aware, the previous behavior was to automatically reset user ratings any time an update was issued, effectively meaning that something like a basic bug fix could wipe clean numerous recent ratings of an app—even if the new update were functionally identical to the one users had left ratings for.

There are numerous other changes and additions in the pipeline for developers, but the ones we highlighted above stand out to us as having the highest potential to affect App Store discovery best practices. Of course, as with any initial announcement, we don't quite know the full story yet, and there are multiple unanswered questions to consider.

Our biggest questions so far both involve App Store search. The first of them is whether or not the newly added, 30-character app subtitles we mentioned above will be indexed for search as app names have been in the past. It stands to reason that if Apple is nearly halving the number of characters in a field it has already been indexing for search, it would also index this new "second half" of the app name. Unfortunately, there's no confirmation on this one way or the other yet.

Our other outstanding question involves search results themselves. Specifically, with editorial stories, lists, and IAP appearing in search results, will they do so consistently? In an early example provided by Apple (as seen in the previous section), a search for "geometry puzzle" has resulted in an editorial, followed by a game. What we don't see is where Search Ads will be placed (they're currently the first result on iOS 10) or whether there will always be a piece of editorial content in position two, and so on. If this is the case, it's possible to imagine the first app result appearing offscreen on iPhone. This seems unlikely, but until Apple clarifies or the iOS 11 beta matures, we won't know for certain.

We'll certainly be following the development of iOS 11 closely, especially as it pertains to app development and discovery, and will share answers to the above questions and others as we learn them.