Amazon announced their foray into the mobile phone hardware market yesterday with the new Fire Phone, running Amazon's Android-based Fire OS. There is a lot of press on how the average end user will use the phone, but what does this mean to app developers?

In this post, we will take a look at pros and cons when it comes to developing apps for the new phone and the Amazon Appstore in general. In my opinion, a lot of the features that were announced with the new phone weren't terribly exciting and while useful, are already available or could be replicated with an app on other devices.

However, there are some very interesting opportunities that present themselves with this new device and are why you should consider publishing apps on the Amazon Appstore.

I believe that this will be the defining feature of the phone and will ultimately be responsible for attracting a large percentage of its user base. Just by tapping the Mayday button, users will have access to 24/7 technical support.

The support person can control your screen and even draw on the screen to point things out. If you have ever worked in IT or tried to teach technology to technically challenged members of your family, you can truly appreciate how valuable this feature can be.

It is already available on the Kindle Fire HDX and the customer reviews have been very good. Amazon has even been able to cut down their response time from a promised 15 seconds, to an astonishing 9.75 seconds.

But developers can also benefit from Mayday. Although it is not designed for your app, users may be able to get help with it by using the Mayday button.

2. Android, Without The Segmentation

One welcome benefit to developing apps for the Fire OS ecosystem is that you only have to optimize for an Apple-like selection of devices. That's including those Blackberry devices that some people apparently still use.

Therefore, it can be faster to develop an app for the Amazon Appstore, compared to Google Play because there is less segmentation and testing time required. The Amazon app approval process is not as loose as the Google Play process, but still seems to be pretty quick and offers a nice compromise between the other two app stores.

In addition, people are already in a buying mindset when they visit Amazon.com. Since the Fire Phone is going to continue that mindset on a mobile device, with tight shopping integration, users should be more likely to spend money while using this phone than a standard Android device.

Some people have criticized Amazon for making the device too expensive but I think that it is actually a really smart filtering tactic. Pricing the Fire on par with an iPhone and other high end phones helps ensures that they get their devices in the hands of people with money to spend.

The unlimited photo storage feature is something that app developers can leverage if they have an app with photo functions. This is a benefit that Amazon almost had to throw in to make the Fire compelling, but it is a great feature and will no doubt be subsidized by all the additional shopping that people will do on these phones.

I turned off the parallax effect in iOS 7 on my iPhone. I have a feeling that the Dynamic Perspective feature on the Fire will be equally cool in the beginning and annoying later.

But the technology that drives Dynamic Perspective on the Fire is different than what creates the parallax effect on the iPhone. Essentially, it comes down to tracking your face with four cameras, one on each corner of the phone. 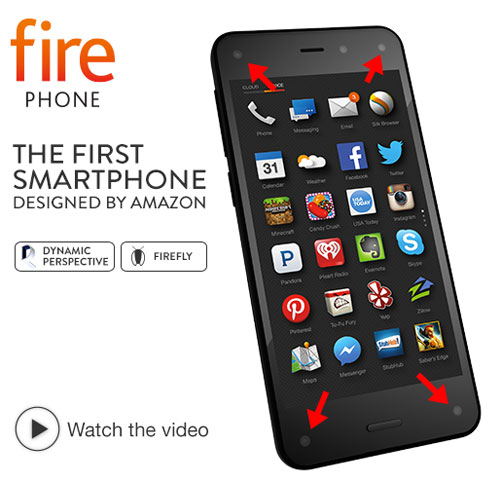 Therein lies the intrigue. Since the phone really is seeing in 3D, it would be easier to create 3D apps.

While the four cameras only track a person's face at the moment, what else could they track? One thought is that they could be used to track hands, which could lead to Leap Motion-like phone controls.

This could also lead to better 3D scanning for 3D printing, for example. Instead of needing an external camera or extrapolating the 3D-ness from a 2D image, the phone would already have the self-contained capability to do this.

Whether the phone can be used in these ways depends on how much Amazon decides to open the SDK. But the existing face tracking feature in itself could power some interesting applications.

Of course, the big downside to publishing to the Amazon Appstore is that you won't have the opportunity to reach as many people, compared to the Apple App Store or Google Play. However, since the Amazon Appstore also only has about 240,000 apps at the moment, the silver lining that there is also a lot of room to stake a claim and grow with the Appstore.

What do you think of the new Amazon Fire Phone?