After months of anticipation, Apple has finally released a Beta version of the new App Analytics dashboard in iTunes Connect. Rumors about this dashboard’s functionality have been circulating since WWDC 14, when Andreas Wendker revealed that app publishers would soon be given greater visibility into their product’s performance.

In previous versions of iTunes Connect, data focused almost exclusively on download and revenue numbers. What we’re seeing today is a platform that provides engagement, conversion, and retention insights as well.

The team at Sensor Tower will provide more in-depth analyses in the coming weeks, along with actionable conclusions. For now, we want to give you a sneak peak at the exciting new data that’s available.

When entering the new dashboard, you’ll find a colorful overview of an app’s lifetime performance data. 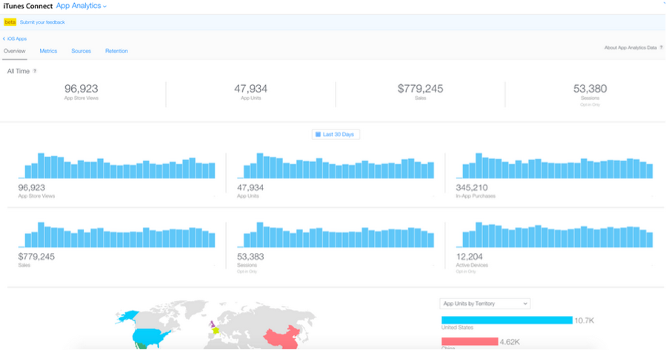 The Metrics tab allows available data sets to be combined into a single view for comparison. In the example below, App Store Views and Installations are selected, allowing easy analysis of an app’s conversion rate. Filter by version, territory, or even campaign to return increasingly granular visualizations.

Whether users are being referred by a website or a campaign, the Sources tab will display specifics around views, sales, and resulting in-app sessions. Eliminating back-and-forth between attribution platforms is a massive improvement for the ITC workflow.

Apple has empowered publishers to do cohort analyses via the new Retention module. With these day-over-day percentages, we’ll gain some much-needed clarity around user activity over time. And guess what? Sorting this data by campaign reveals which effort is yielding the most valuable end users. 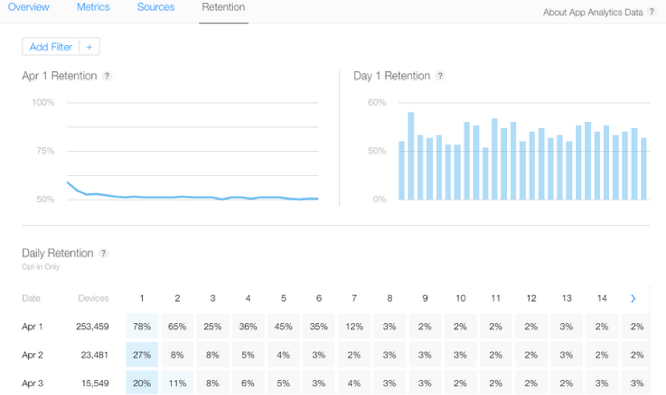 Apple notes that all data is specific to devices running iOS 8 or later, and the numbers will be backfilled to April 1, 2015. Also, Apple Watch data will not be included for the time being. While end users can choose not to share their usage data by opting out, publishers will be provided with an exact percentage of their sample set. Link: itunesconnect.apple.com/WebObjects/iTunesConnect.woa/wa/jumpTo?page=faqIndex&group=appanalytics

The Sensor Tower data gurus are already digging in and uncovering new optimization opportunities. Follow along as we share the most creative ways to derive value from Apple’s big update.