Global consumer spending on the App Store and Google Play totaled $18.2 billion during the third quarter, Sensor Tower Store Intelligence data reveals. This marks a 22.7 percent increase over the $14.8 billion we estimate was spent on both stores during the year-ago quarter. At the same time, Apple has expanded its commanding lead in app monetization over Google, with the App Store earning nearly 94 percent more than Google Play during the quarter, the widest revenue disparity since at least 2014 between the two platforms. 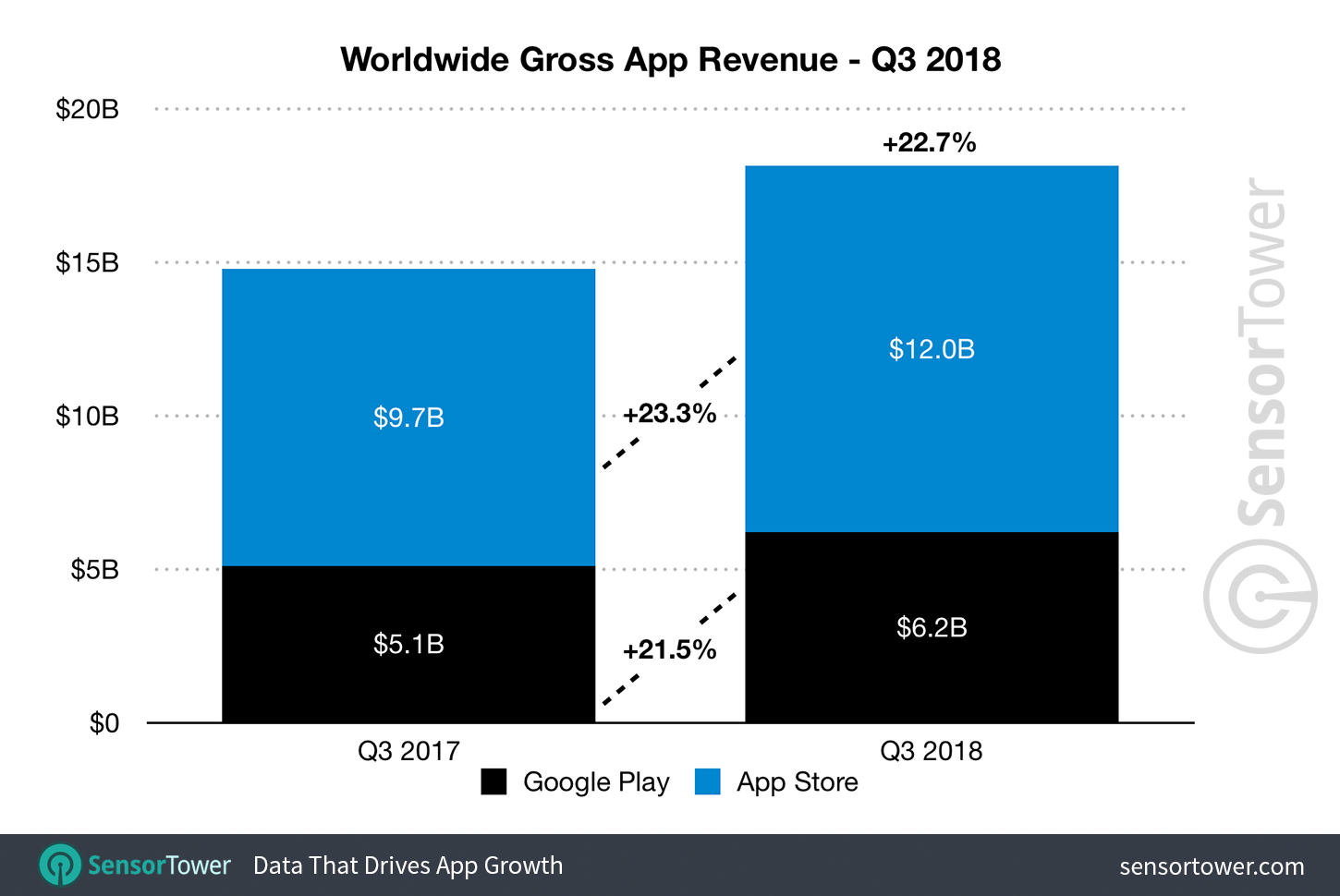 App installs grew 10.9 percent across both stores combined last quarter to 27.1 billion, up from 24.4 in 3Q17. Rapid adoption of lower-cost Android devices in developing nations continued to give Google Play an edge in terms of app install growth last quarter at 14.3 percent, climbing from 17.1 to 19.5 billion year-over-year. On iOS, new app installs reached 7.6 billion for the quarter, a 3.1 percent increase year-over-year from September 2017 when the platform saw 7.3 billion first-time downloads. 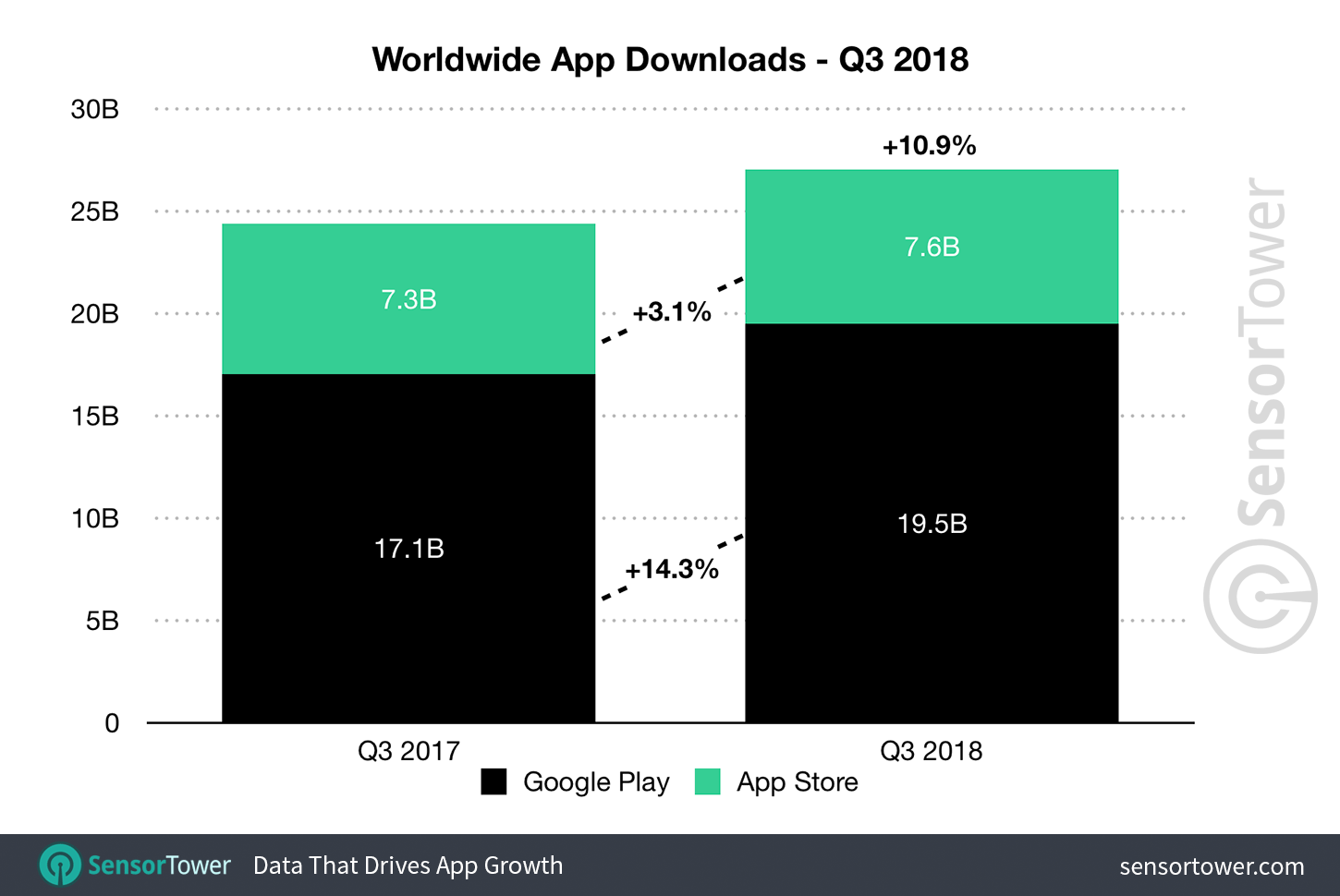 Netflix was the world's top grossing non-game mobile app for the third consecutive quarter in Q3, bringing in an estimated $243.7 million across both platforms from in-app subscriptions. It led the likes of Tinder and Tencent Video, which retained their No. 2 and No. 3 rankings, respectively, from the second quarter. 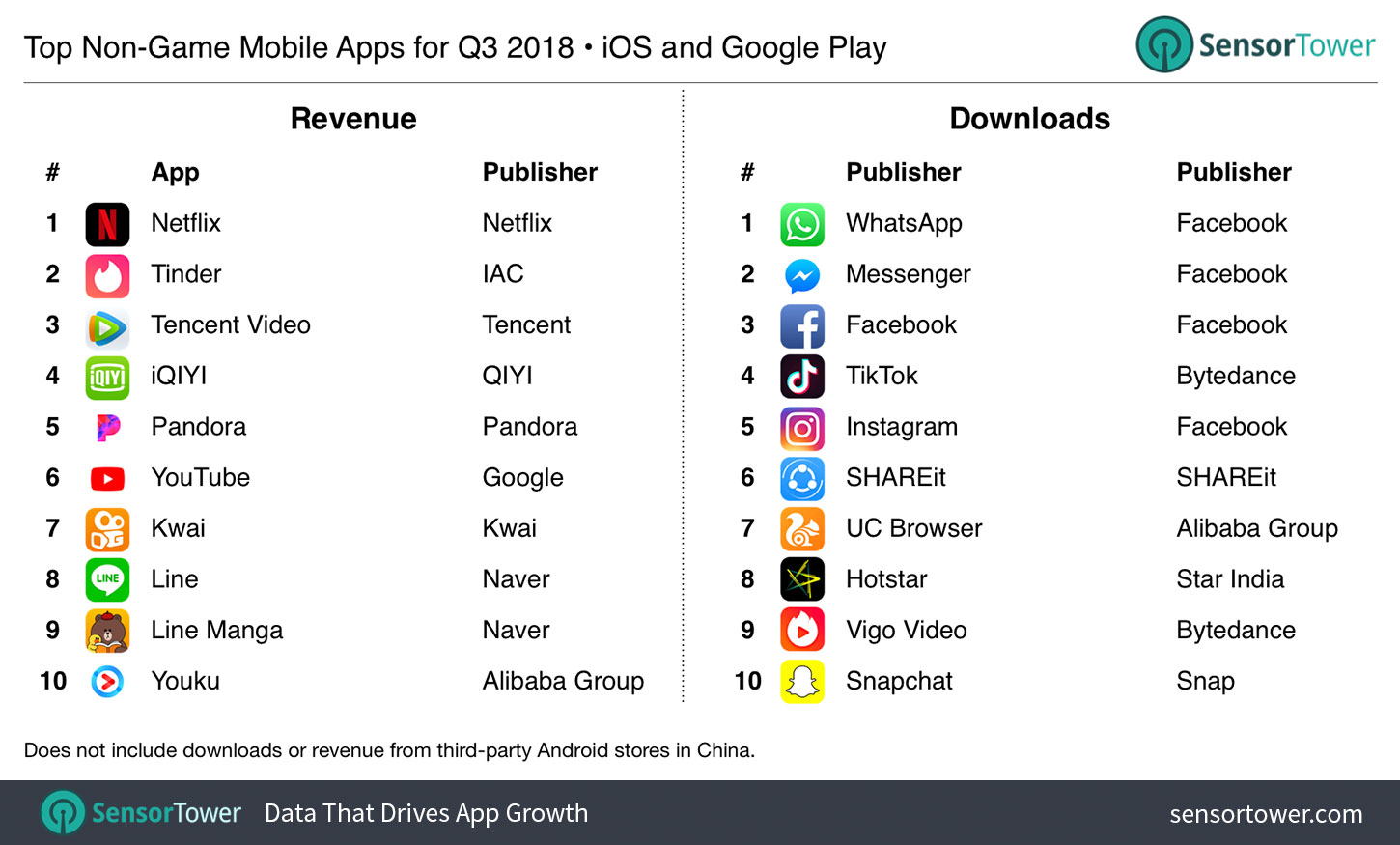 Mobile games spending increased 14.9 percent year-over-year during the quarter to $13.8 billion or 76 percent of all app revenue worldwide across both platforms. The App Store accounted for about 62 percent ($8.5 billion) of this revenue and grew 12.8 percent from the year-ago quarter. Google Play's gaming revenue grew more substantially at 18.4 percent and, at $5.3 billion, represented 38 percent of all money spent in mobile games on both stores during Q3. 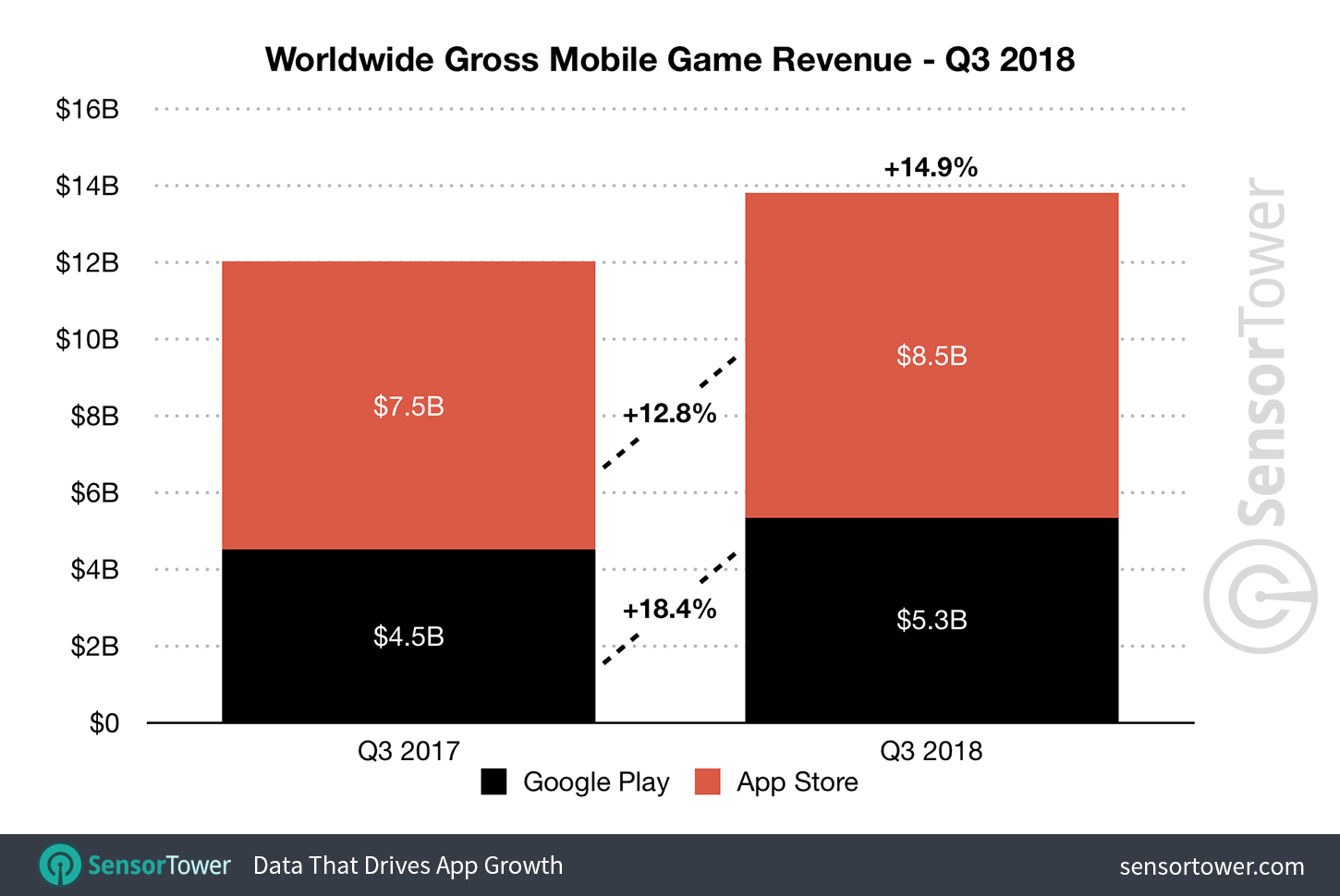 Downloads of mobile games grew 2.2 percent year-over-year last quarter to total 9.5 billion on the two platforms. Google Play saw the majority of those—7.2 billion—which represented about 76 percent of all mobile game installs and grew 2.4 percent from seven billion in the year-ago quarter. Game downloads on the App Store grew 1.6 percent to 2.3 billion, up from 2.2 billion in 3Q17. 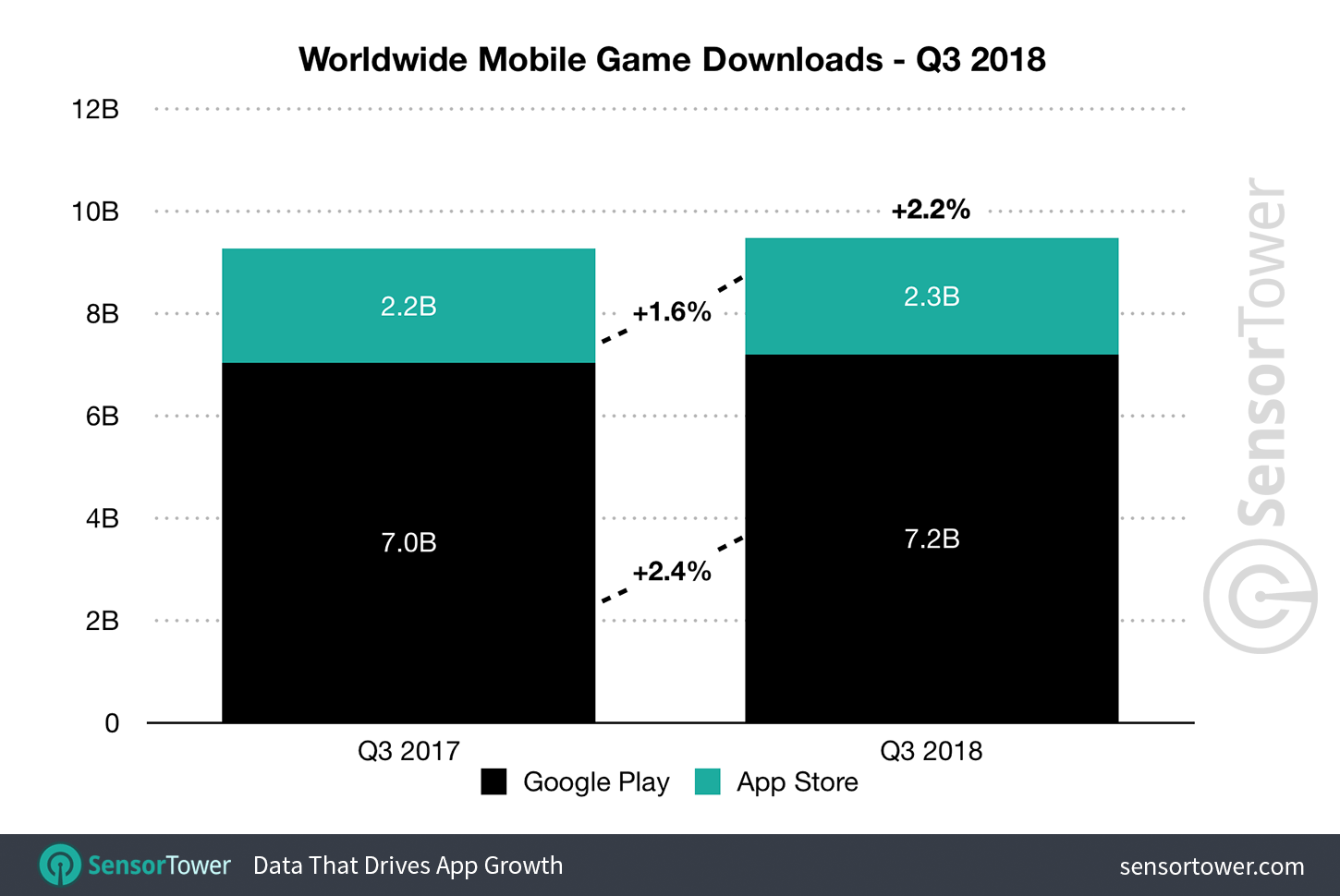 Gaming revenue was once again led by titles from Asia, with Tencent's MOBA Honor of Kings retaining the crown of the world's top grossing app, game or otherwise. Niantic's Pokémon GO was the top ranked Western made game by revenue, while Fortnite from Epic Games ranked at No. 9 despite not being available on Google Play. 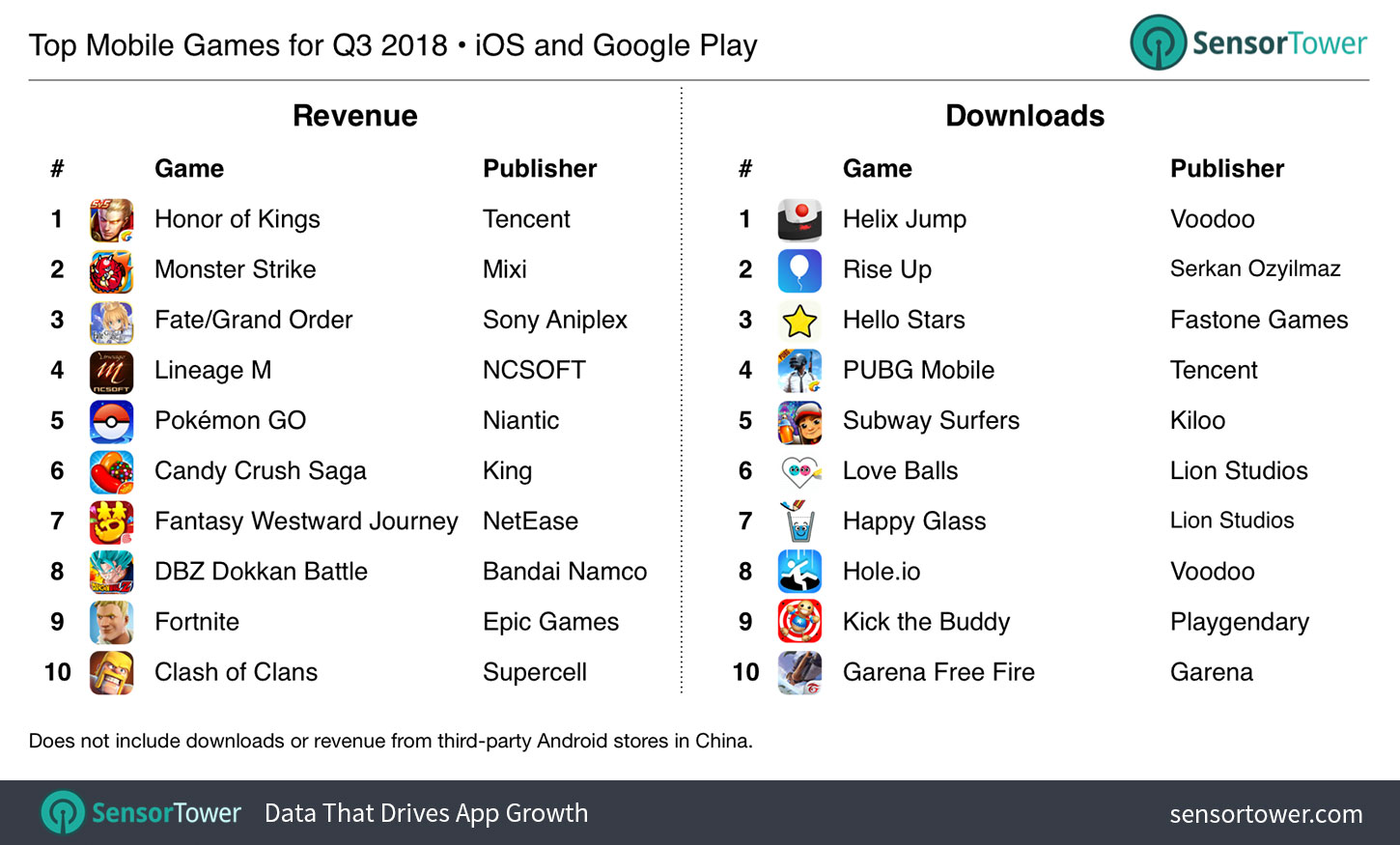 Game downloads continued to be led by hyper casual titles, including Helix Jump from France's Voodoo. In fact, seven of the top 10 games fell into this category, with one hard-core title, Tencent's PUBG Mobile, breaking into the top five.