Mobile consumers spent an estimated $21.9 billion on apps across the App Store and Google Play in Q3 2019, according to Sensor Tower Store Intelligence data.

This represented a 22.9 percent increase year-over-year from the $17.9 billion that mobile publishers generated in gross revenue during Q3 2018, based on user spend for in-app purchases, subscriptions, and premium apps.

This report takes a deep dive into non-gaming and gaming app installs and revenue figures across both the app stores, as well as taking a look at the hottest apps on the market right now.

Overall App Store sales made up 65 percent of total spending across the two stores, with Google Play accounting for 35 percent. 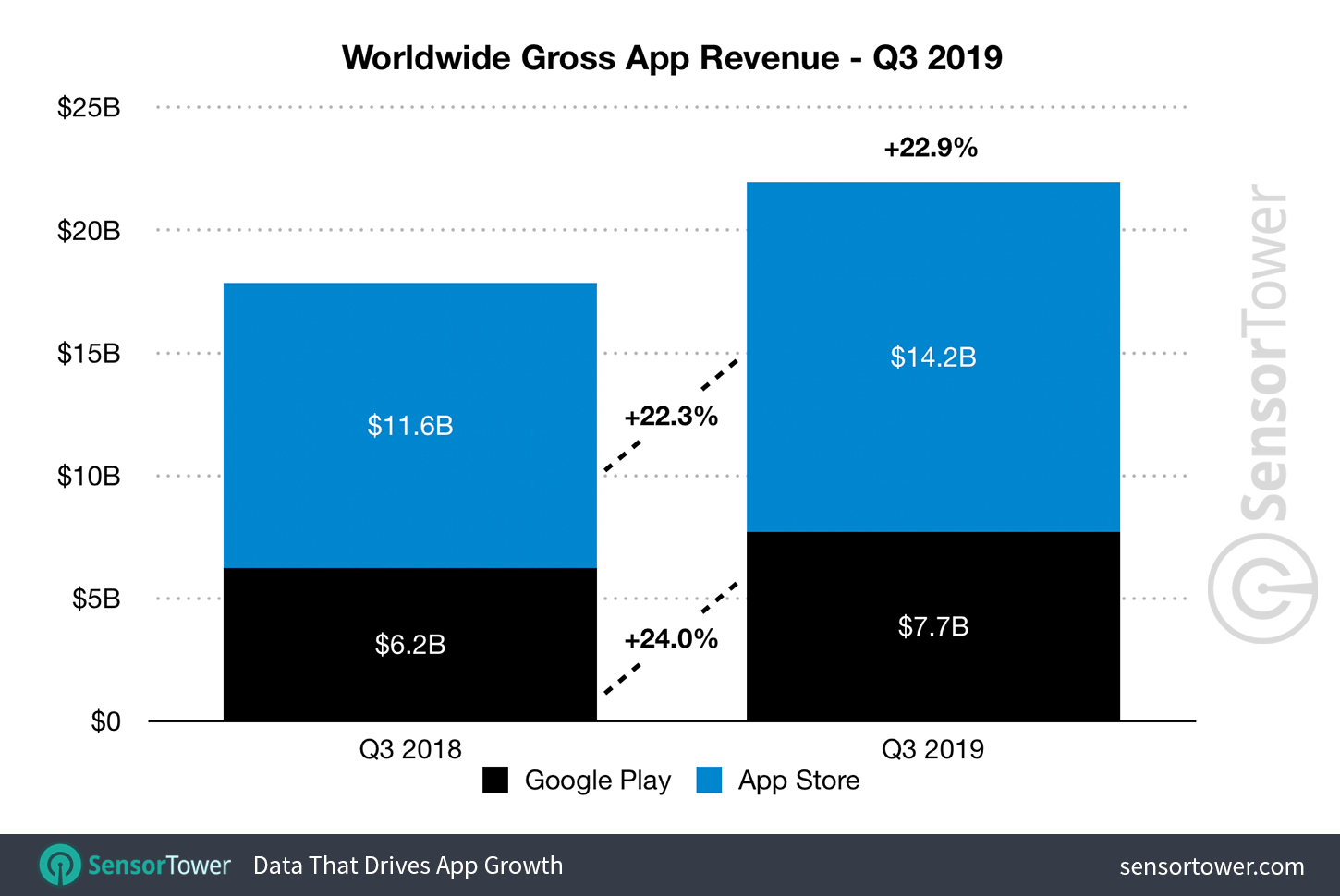 Google Play generated nearly three-times more first-time app installs in Q3 2019 than the App Store, accumulating 21.6 billion during the quarter, up 11.3 percent Y/Y from 19.4 billion in Q3 2018. The App Store also saw growth for the period, with first time app installs increasing by 5.3 percent Y/Y from 7.6 billion to just under eight billion. The total number of downloads in Q3 2019 was 29.6 billion, up 9.7 percent from the year-ago quarter.

Despite the growth, one of the world's biggest markets, China, saw a 6 percent decline Y/Y from 2.3 billion in Q3 2018 to just under 2.2 billion in Q3 2019. Revenue, though, grew 26.9 percent in China from $3.2 billion the year prior to $4.1 billion in Q3 2019. Downloads in China have been flat since Q4 2018 amid and following the slow resumption of license approvals for game releases in the country in December 2018, following a nine-month freeze. Sales have been on the increase since Q2 2018, however. 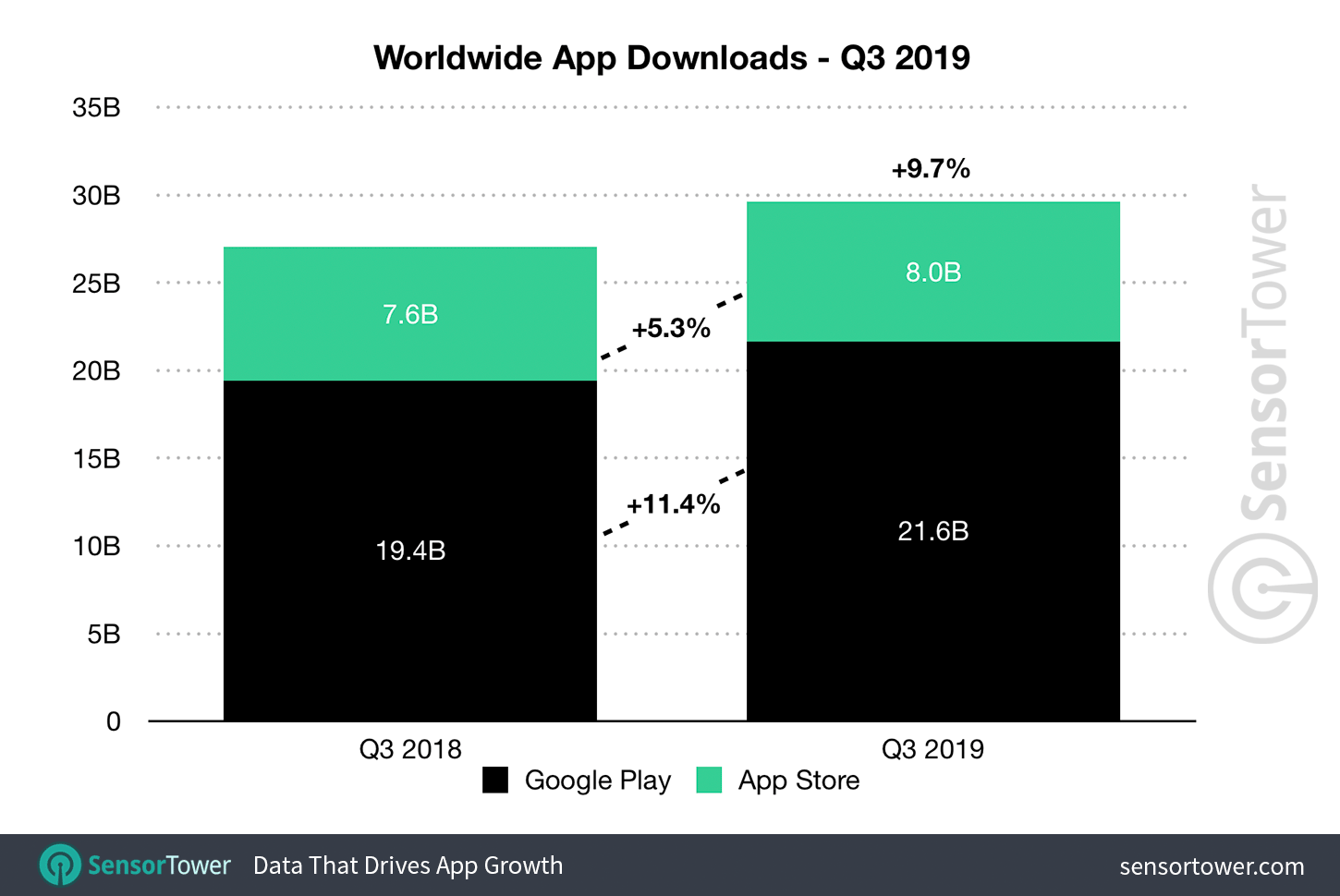 Tinder maintained its position at the top of the worldwide non-gaming app revenue rankings, generating approximately $233 million from user spend, up 7 percent Y/Y. YouTube continues to be a fast-riser after increasing in-app spend by 16 percent Y/Y to $164 million. On a quarterly basis, YouTube app revenue has never declined in terms of user spending. 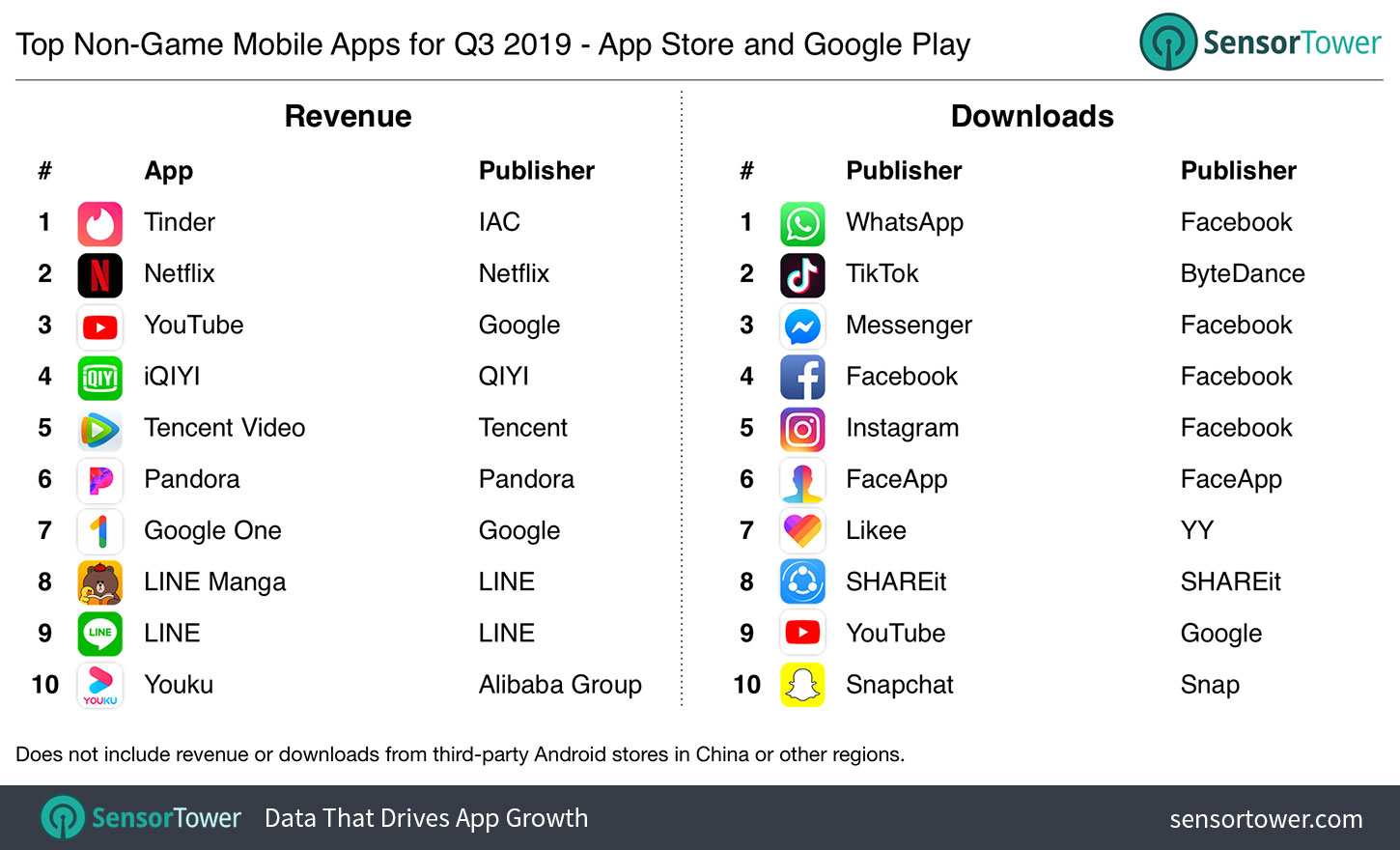 TikTok is steadily breaking the monopoly Facebook has had atop the non-gaming app download rankings. Having first broken past the Facebook app in Q4 2018 and again in Q1 2019, it slipped back into No. 4 in Q2 2019. However, in Q3 2019 it generated nearly 177 million downloads to become the No. 2 most downloaded app in the quarter above Messenger, the Facebook app, and Instagram, with WhatsApp firmly in its sights.

For the 2019 quarter, the games category represented 74 percent of total in-app spending, a decline from the 76 percent share it took in Q3 2018. As with overall app spending, App Store users forked out the most money on games, spending $9.8 billion in Q3 2019, up 19 percent Y/Y from $8.2 billion the year prior. 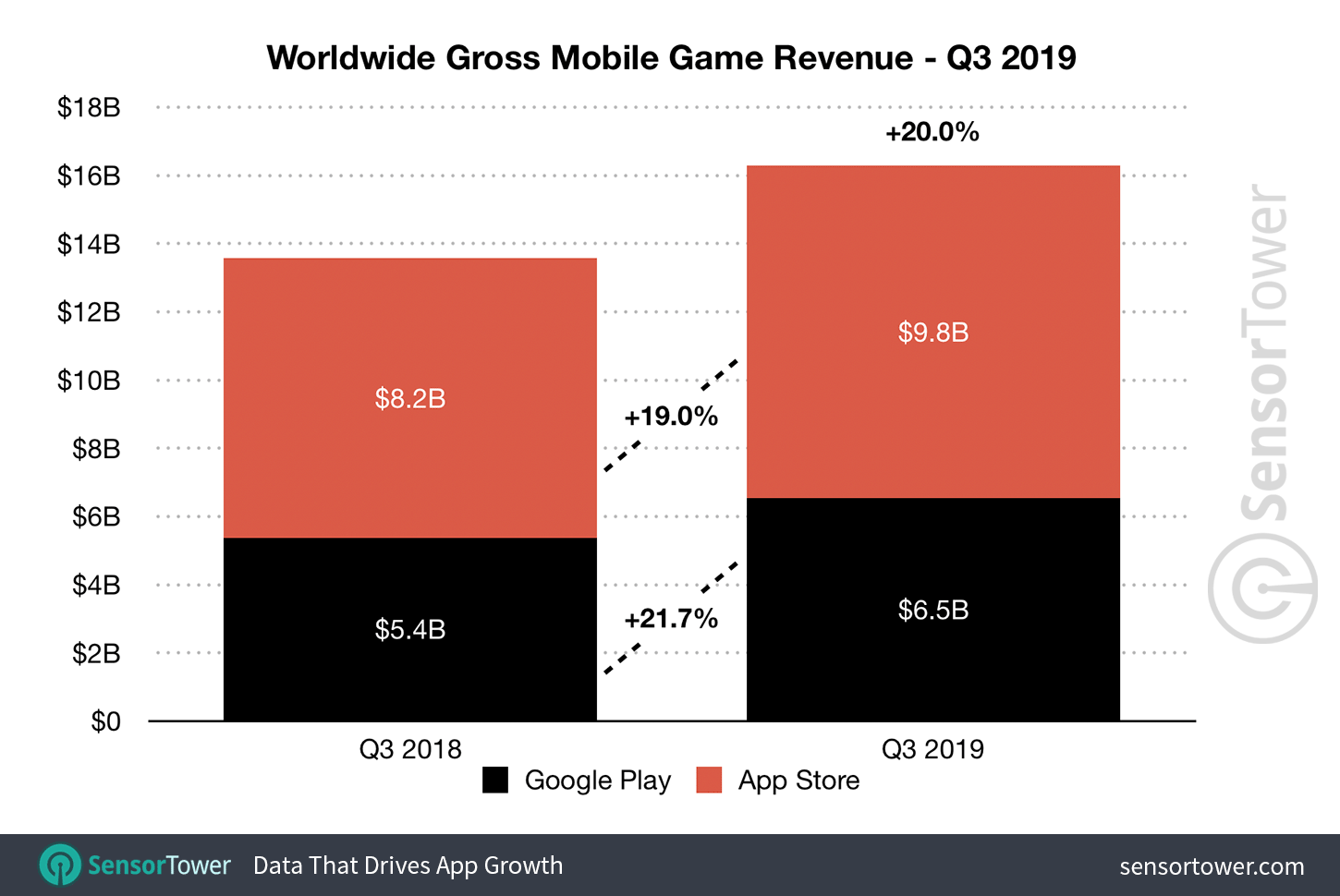 Google Play's share of all game downloads across the stores increased Y/Y from 76 percent to 78 percent, which, as a result, saw the App Store's share of downloads decrease to 22 percent. 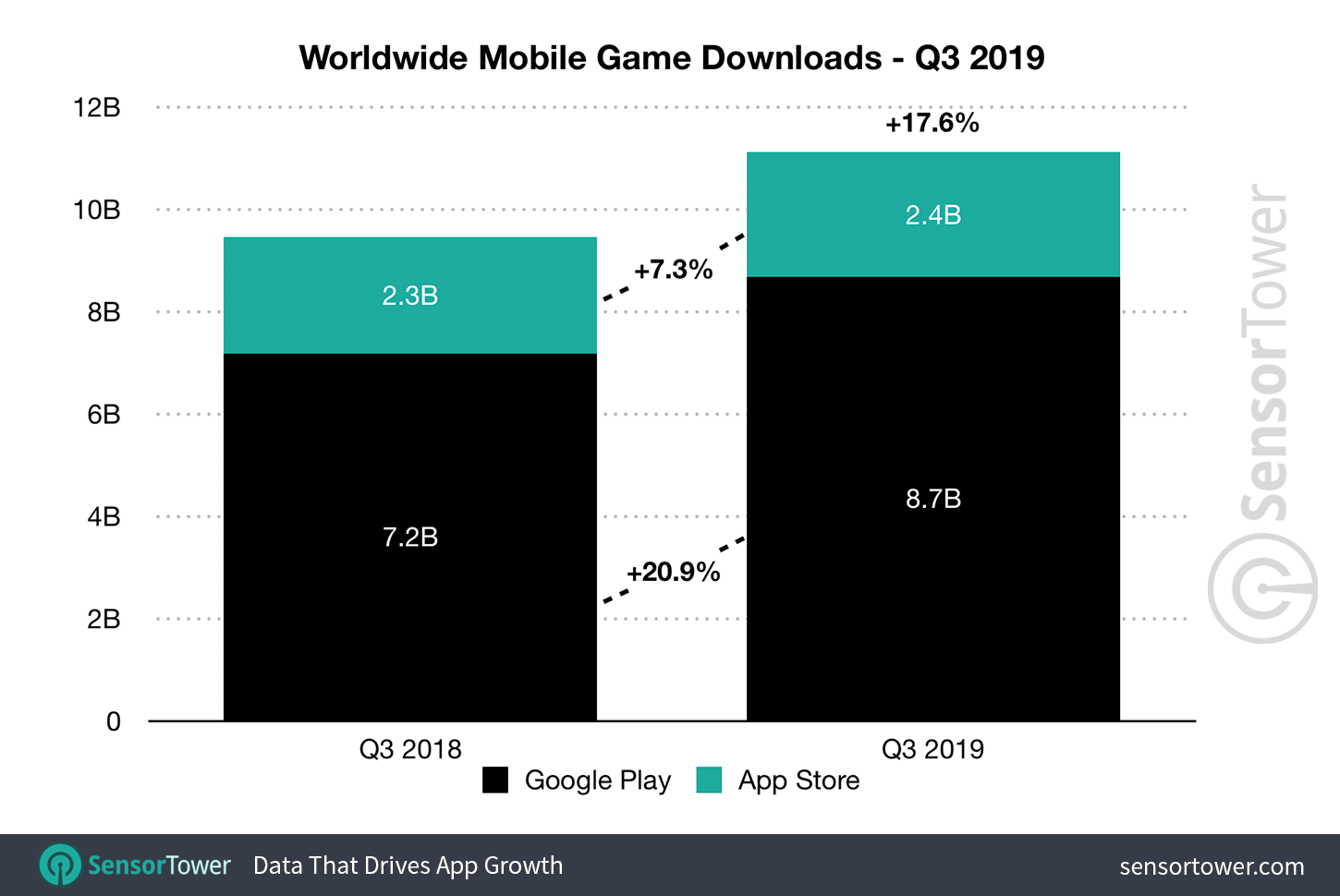 Nintendo's Mario Kart Tour raced straight into third place in the top global mobile game download chart in Q3 2019 with 86 million downloads. That's despite the fact the game only launched on September 25, 2019. Despite an explosive start, it did not break into the top 100 grossing games rankings.

For the first time, Tencent's PUBG Mobile has become the world's top grossing game, picking up $496 million in Q3 2019 alone, with revenue growing 652 percent Y/Y. For perspective, other Asia heavyweights such as Tencent's Honor of Kings and Aniplex's Fate/Grand Order generated $377 million and $354 million, respectively, during the quarter.

Niantic's Pokemon Go was the fastest-growing game by revenue quarter-over-quarter, up 63 percent to $308 million. 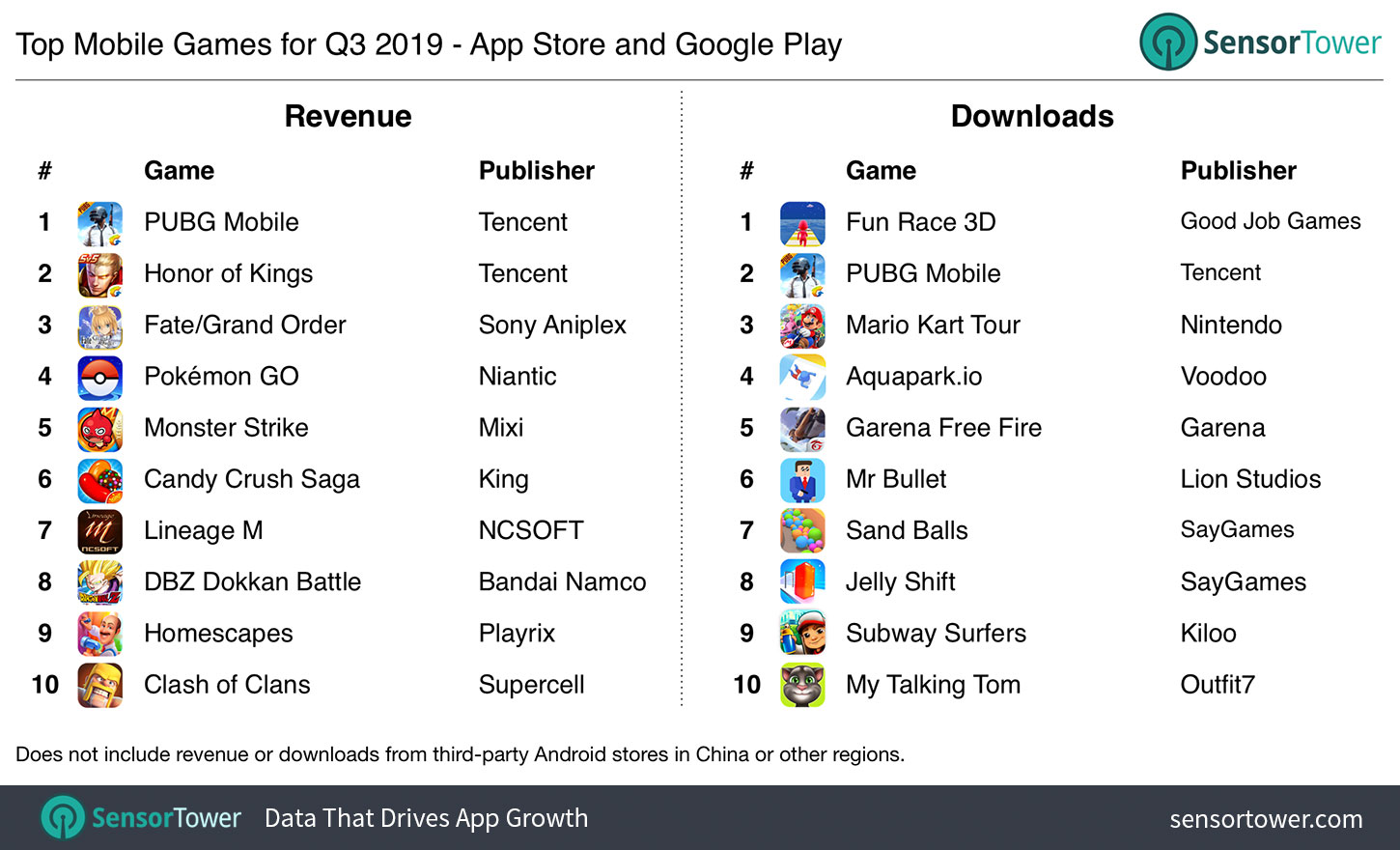 Outside of the casual titles, battle royale hits PUBG Mobile and Garena Free Fire continue to rack up significant first-time installs, ranking in the No. 2 and No. 5 positions, respectively.