Apps We're Watching has the week's most noteworthy news about the app ecosystem at the ready, with a look at three apps that made waves on the App Store in the past seven days. We've got details on an interesting visibility hack from Twitter, a relaunched app from its co-founder, Biz Stone, and the unexpected way Microsoft nearly topped the download rankings this week.

Twitter's in the News (Category)

The day after announcing its Q1 2016 earnings, which showed a small amount of growth in active users compared to the previous quarter, social network Twitter decided to try something new on the App Store. Not a new icon, screenshots, or even keywords—it jumped shipped on the Social Networking category altogether and landed in News.

As you can see in the Sensor Tower App Intelligence ranking history below, the result was an immediate jump from being ranked No. 5 in Social Networking to No. 1 in news above Reddit and the CNN App for iPhone, where it remains as of this writing: 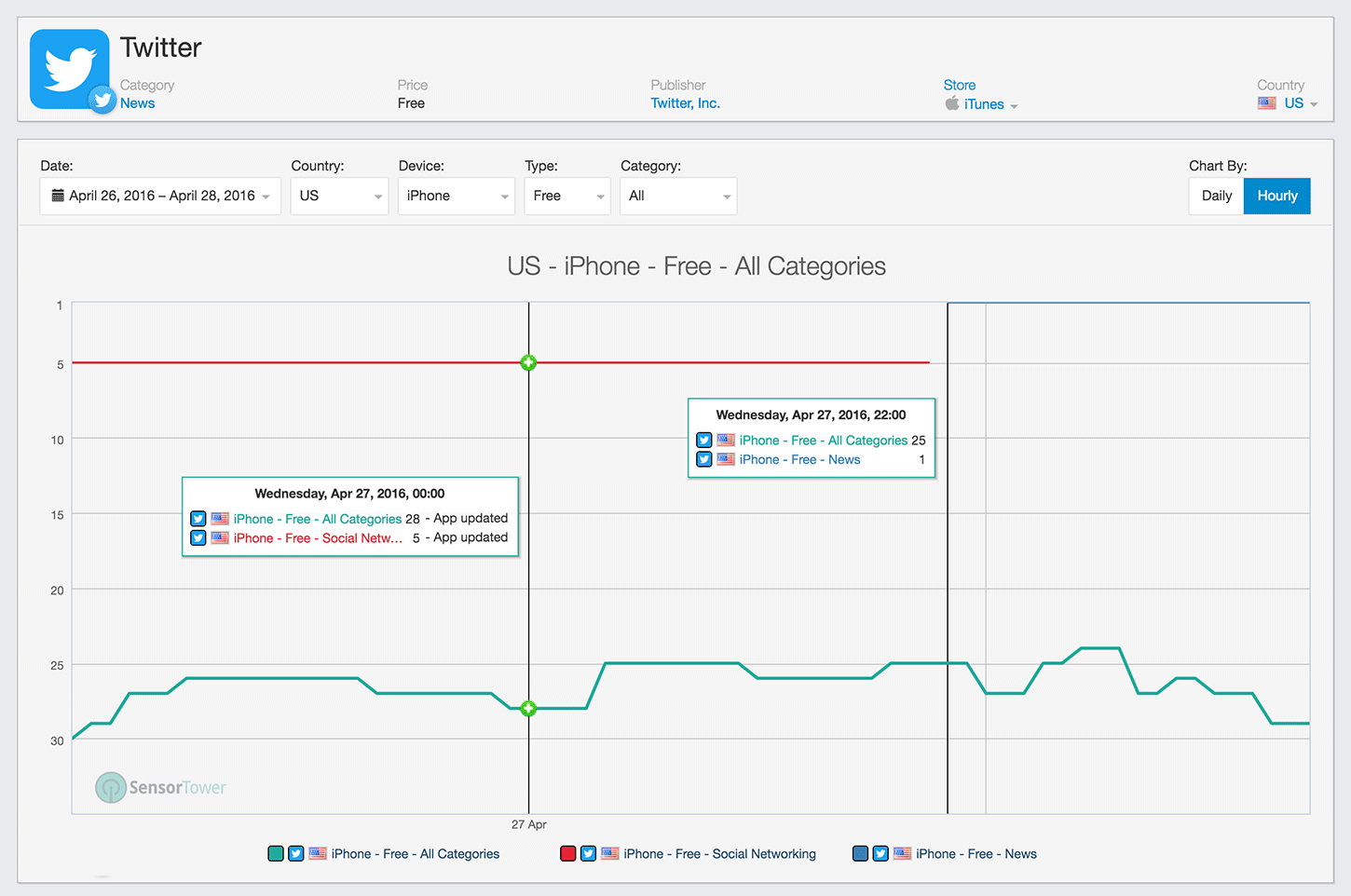 Twitter jumped from No. 5 in Social Networking to No. 1 in News immediately following its primary category change.

As you can also see, the switch otherwise had no immediate effect on its overall ranking in free apps for all categories. Why the change? Twitter probably had multiple reasons to recategorize its app, but the biggest were likely discovery/visibility and overall positioning.

Despite consistently placing in the top 10 for free apps in the Social Networking category, the Twitter app has long been outranked by the likes of Pinterest, Facebook, and Messenger. Without a minor miracle, it's unlikely that it would have topped the category in the foreseeable future. By moving to News, it instantly became the most visible app in a category Twitter has been moving towards outside the App Store for some time: real time news.

By emphasizing its core strength of tracking current events—something it has doubled down on recently with the introduction of Moments—Twitter is clearly hoping to attract new types of users. This category change should serve to better position the app in front of users seeking to be informed rather than simply connected to friends or followers. It's an intriguing strategy and we look forward to seeing if it shakes up Twitter's status quo on the App Store in Q2.

Speaking of Twitter, this week saw the re-introduction of a product from one of its co-founders, Biz Stone. Jelly isn't new, nor is its core premise—real answers from real people—but it's been repositioned as less of a "network" and more of a search engine.

Jelly will find answers to your queries from real humans—but it's not instantaneous.

Stone's involvement obviously carries potential—after all, in addition to Twitter he co-founded popular blogging platform Medium. Obviously the first time for Jelly wasn't the charm, but we'll be tracking its second incarnation to see if it can become a real App Store contender.

Last up this week, we've seen Microsoft turn one of the best parts of its ill-fated Windows Phone platform into its most popular iOS app in a long time. We're talking about Word Flow Keyboard, which launched this past Monday and brings the gesture-based typing experience of Microsoft's mobile operating system to iPhone.

The free app, which features a unique curved typing option for one-handed use, quickly became Microsoft's highest-ranking App Store offering upon its release. The App Intelligence ranking history chart below shows how it has stacked up against the company other top apps throughout the week: 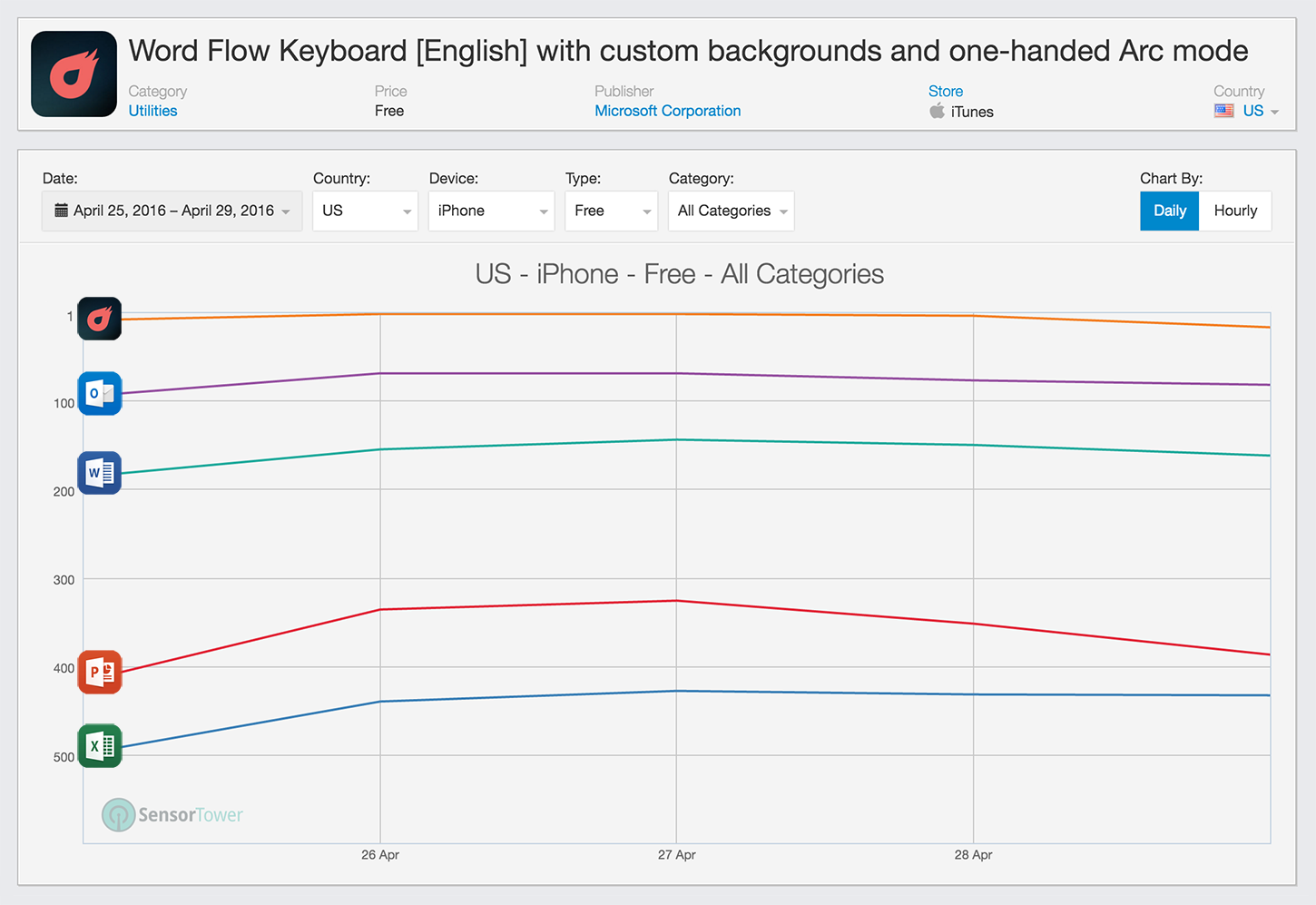 Word Flow overtook Outlook as Microsoft's most popular iOS app during its first week of availability on the App Store.

Word Flow was ranked No. 2 in all categories for free iPhone apps in the U.S. store for two days (it's still in the top 25) and remains ranked No. 1 in Utilities as of this writing, above the Google App. For some context, rival replacement keyboard SwiftKey Keyboard spent its launch day at No. 1 in all categories back in September 2014 and was out of the top 50 within 10 days of its release. It currently ranks No. 1,291 on the U.S. all categories chart.