In this week's Apps We're Watching, we take a look at how HBO Now is monetizing from the new season of Game of Thrones, witness Mobile Strike's assault on the No. 1 top grossing rank, and see how a big Hollywood movie gave new life to the original Angry Birds.

Last month saw the premiere of season six of HBO's enormously popular series Game of Thrones, and the desire of its fans to stream episodes on their iOS devices translated to a huge jump in new installs for the HBO Now app. Now a month later, once the 30-day free trials have ended, we're getting a sense of how many of those viewers are sticking around—at least until the end of this season.

The App Intelligence chart below shows how the HBO Now app has ranked for downloads and revenue in all categories on the U.S. App Store since its launch in April 2015: 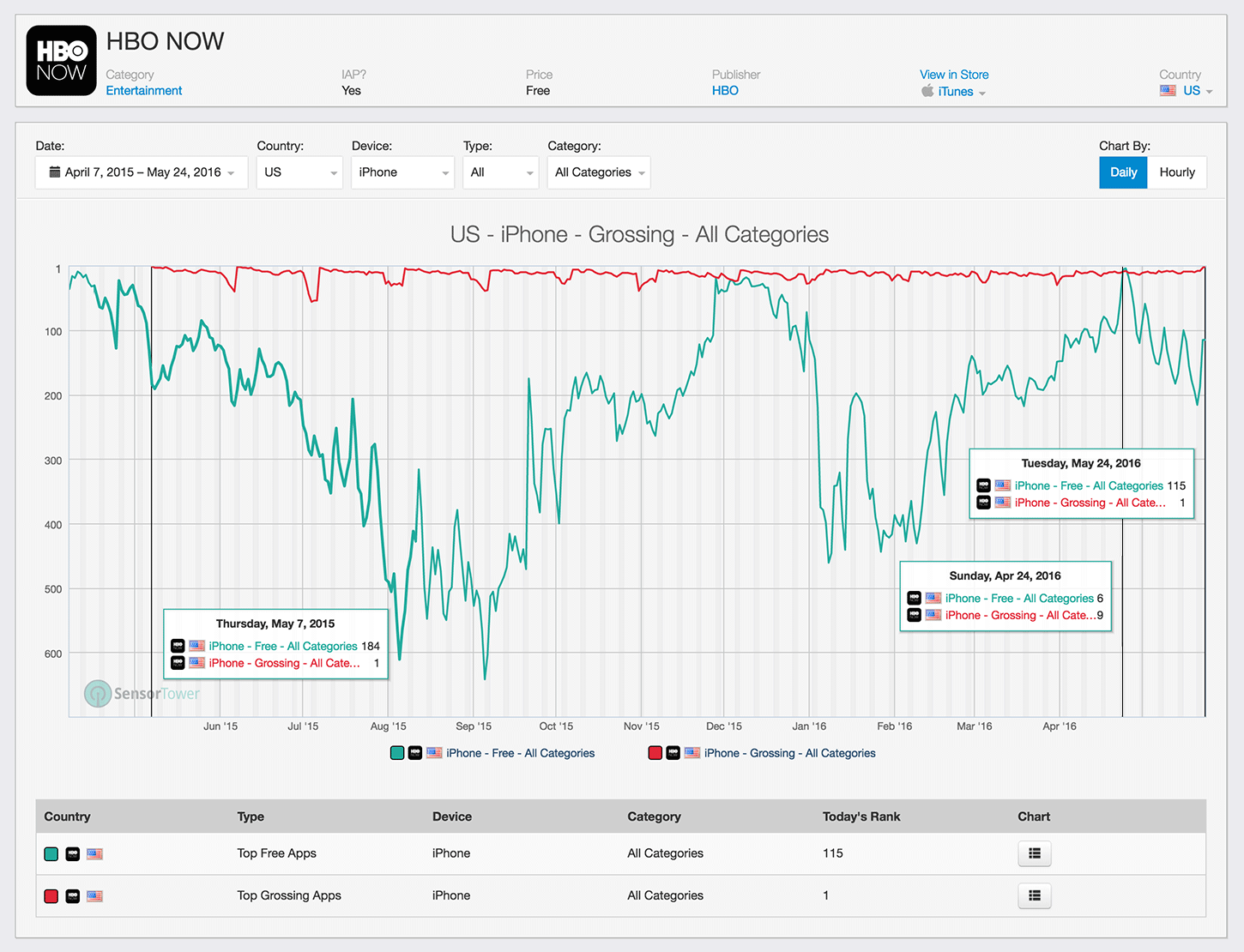 HBO Now has seen its revenue spike significantly one month after the premieres of Game of Thrones seasons five and six.

On the far right of the chart is one month after Game of Thrones season six's premiere, when HBO Now reached No. 1 on the App Store's top grossing ranking for iPhone for only the second time since launch. The first time was one month after the premiere of Game of Thrones season five. While the app did see a significant increase in new installs through the holiday 2015 period, the revenue from those new users converting to paid subscribers following the trial period never pushed HBO Now into the top spot.

Obviously, it will be difficult—if not impossible—for HBO to deliver programming as popular as Game of Thrones on a schedule consistent enough to cement its app in the top spot for long periods of time, but this (like what we've seen with Tidal's revenue rankings after a major album exclusive) shows the power original content holds—something that even non-streaming apps such as Snapchat have been attempting to leverage into more installs and user engagement for some time.

We'll see how HBO Now's revenue ranking looks in a couple months when the latest Game of Thrones season wraps. The premium network is obviously hoping that all those new subscribers (and re-subscribers) don't cancel their subscriptions just because Westeros is closed for the season.

It's been obvious for some time that MZ has another revenue hit on its hands with Mobile Strike, but until this week it had yet to reach the same level of success as Game of War. That changed on Monday when (however briefly) the game reached No. 1 in top grossing on the U.S. App Store.

After being surmounted by HBO Now, the war game retook the top spot today, where it remains as of this writing. Below you can see the app's climb to the top of the revenue ranking: 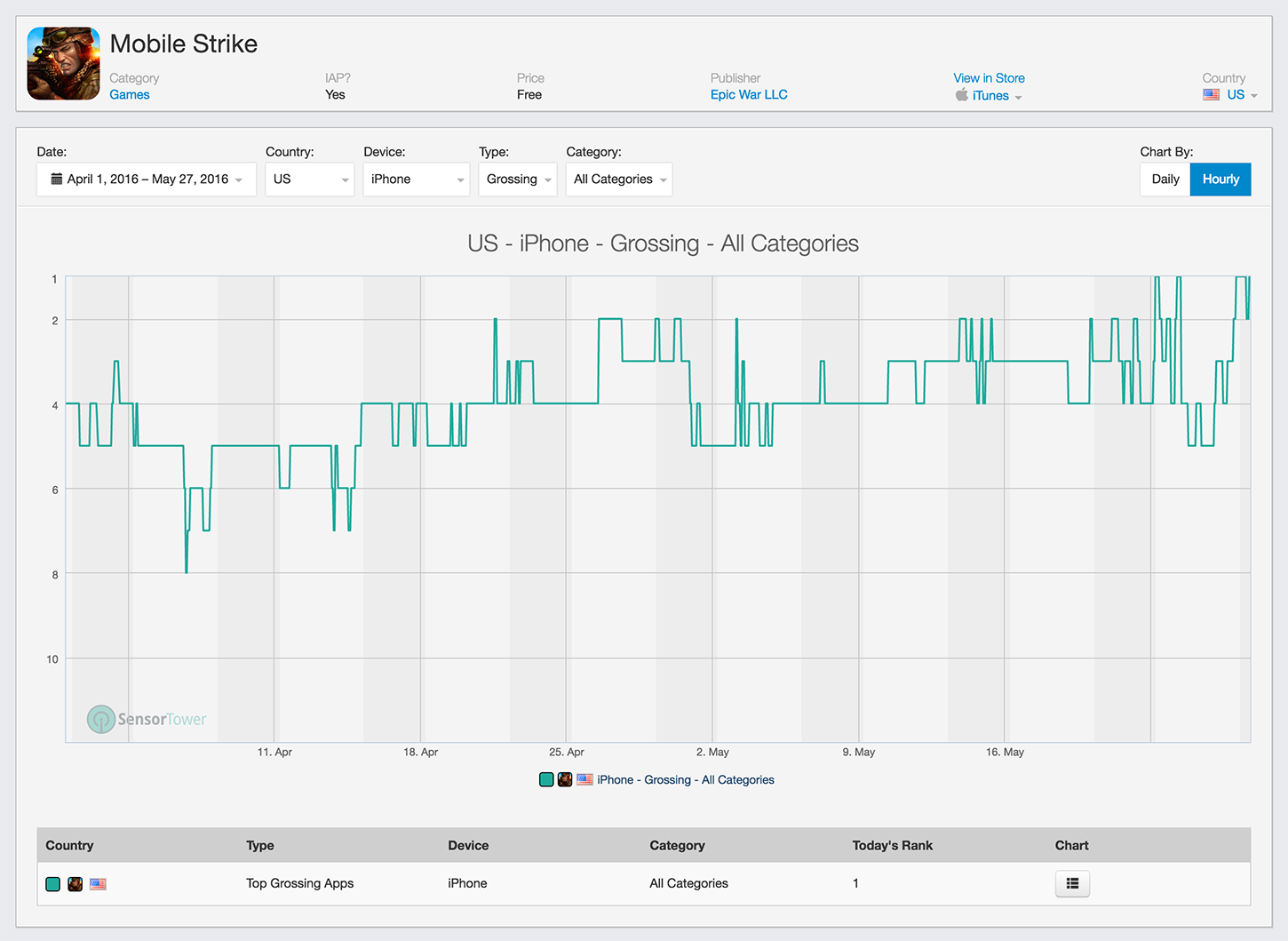 Launched in November 2015, Mobile Strike finally reached No. 1 this week after spending months in the top 10 highest grossing apps.

The app's revenue performance is a testament to MZ's ongoing refinement of its monetization mechanisms and nurturing of its player base, using methods honed in the consistently performing Game of War. In fact, as of this post, MZ owns the top two highest grossing games on the U.S. store. Mobile Strike isn't only finding a path to revenue leadership on iOS, either; the game is currently ranked No. 3 on the U.S. Google Play store for revenue, right behind Game of War.

Angry Birds Soars Again on the Release the Motion Picture

Rovio probably wasn't too pleased with the scores the Angry Birds movie received from critics, but it has to be happy with what the film's release has done for interest in its mobile gaming namesake. In the App Intelligence chart below, you can see how the app's ranking on the U.S. App Store improved in all categories as marketing for the film switched into high gear. 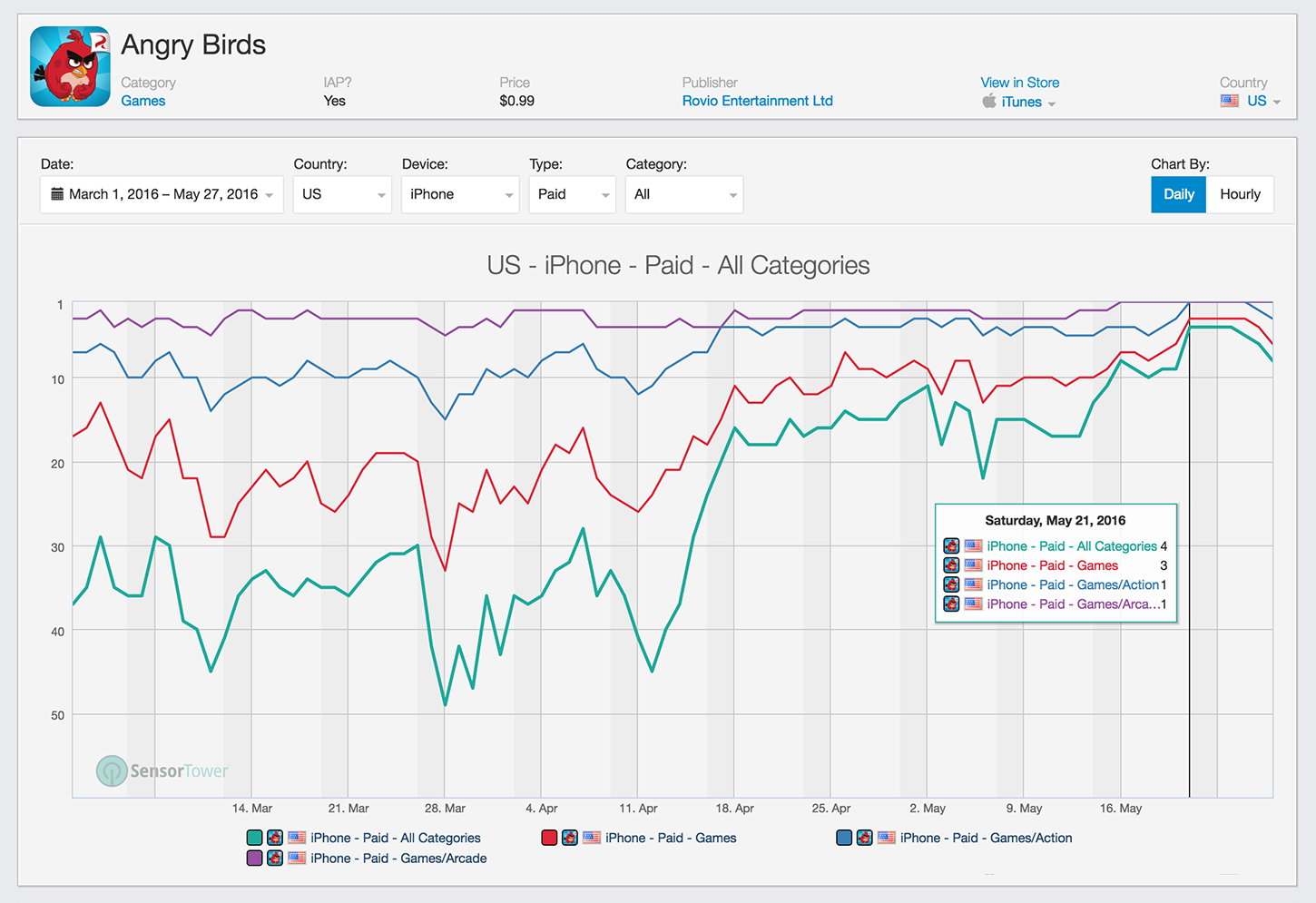 Angry Birds was ranked No. 37 in all categories for paid apps on the U.S. App Store as of March 1. The day after the movie's premiere, it hit No. 4.

The app's highest rank in all categories came the day after the movie's release, which was preceded by featuring on the App Store beginning on May 15. Even before the prominent hero banner debuted on the store, the app was already climbing the rankings, no doubt as the film's marketing encouraged new players to pay 99 cents to see what the buzz was about. Rovio was clearly letting the film's marketing do the heavy lifting here; our Ad Intelligence platform showed only minimal app install advertising for Angry Birds during the period covered by the chart above.