You probably guessed that this would happen...eventually. Apple finally debuted the first ever app trailer video. The demo video debuted for the Editor's Choice game Clumsy Ninja.

Video trailers have been highly requested over the years and many developers and customers alike are hoping that this feature will be available for all apps. So far, Clumsy Ninja on the UK App Store is the only app that holds the distinction of having a trailer.

As Android developers know, this is a feature that is already available on Google Play. Here is an example from the Google Play Store for the popular game Plants vs. Zombies. 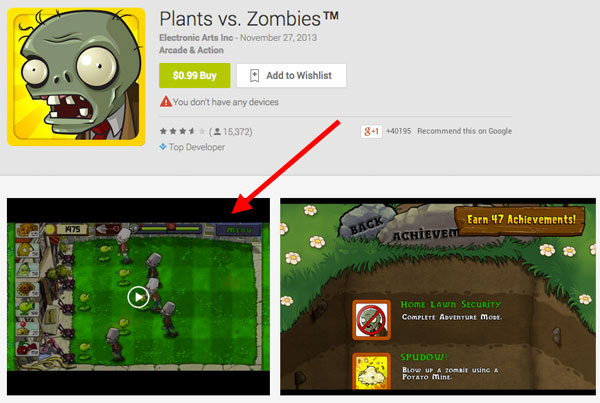 If the functions of an app cannot be explained easily through screenshots, a demo video goes a long way towards showing a potential user how good the app is. It can also create the emotional connection necessary for a person to make the impulse decision to download an app.

How To Use This News

There is no indication that this feature will be available to all app developers. However, given the obvious benefits and the existence of trailers on the Google Play Store, it would only make sense for Apple to add this feature.

If you have an Android version of your app, or are planning to create one, then a demo video is a must. There are several different low cost ways to create an app trailer, so don't think that you have to spend a ton of money to get one made. Here is an example of a good demo video that was made very inexpensively.

However, if you are going to stick to iOS only for the foreseeable future, then there are two ways that you can use this news. First, you could just get a demo video created to use on your website and on YouTube. Then if Apple does announce the availability of video trailers, you are good to go.

Second, if you are not convinced that demo videos will be available on the App Store and you don't want to invest the time and/or money yet, you could put a plan in place to create a video for your app, but just not execute it until Apple makes a move. This plan would include where to find an individual or company to do your video, or how you will go about creating it yourself, and a general idea of the content you would like to see in the video.

If you would like to include actual game play in your trailer, consider implementing a SDK that allows users to record their game play. Regardless if you choose to create a video now or just put a plan in place to create one later, you will be ready step up your App Store Optimization if Apple decides to make this available to all developers.

Being prepared can keep you one step ahead of your competition. Until then, make sure that your screenshots are the best they can be.

Do you think Apple will allow all apps to have a trailer? Let us know your opinion in the comments below.