As the following charts reveal, these downloads have been heavily concentrated around a few key App Store categories, including Games, Utilities, and Lifestyle. In addition to this, we've put together top 10 rankings of the most downloaded free and paid ARKit-only apps and games, along with the highest grossing offerings so far in this growing space. 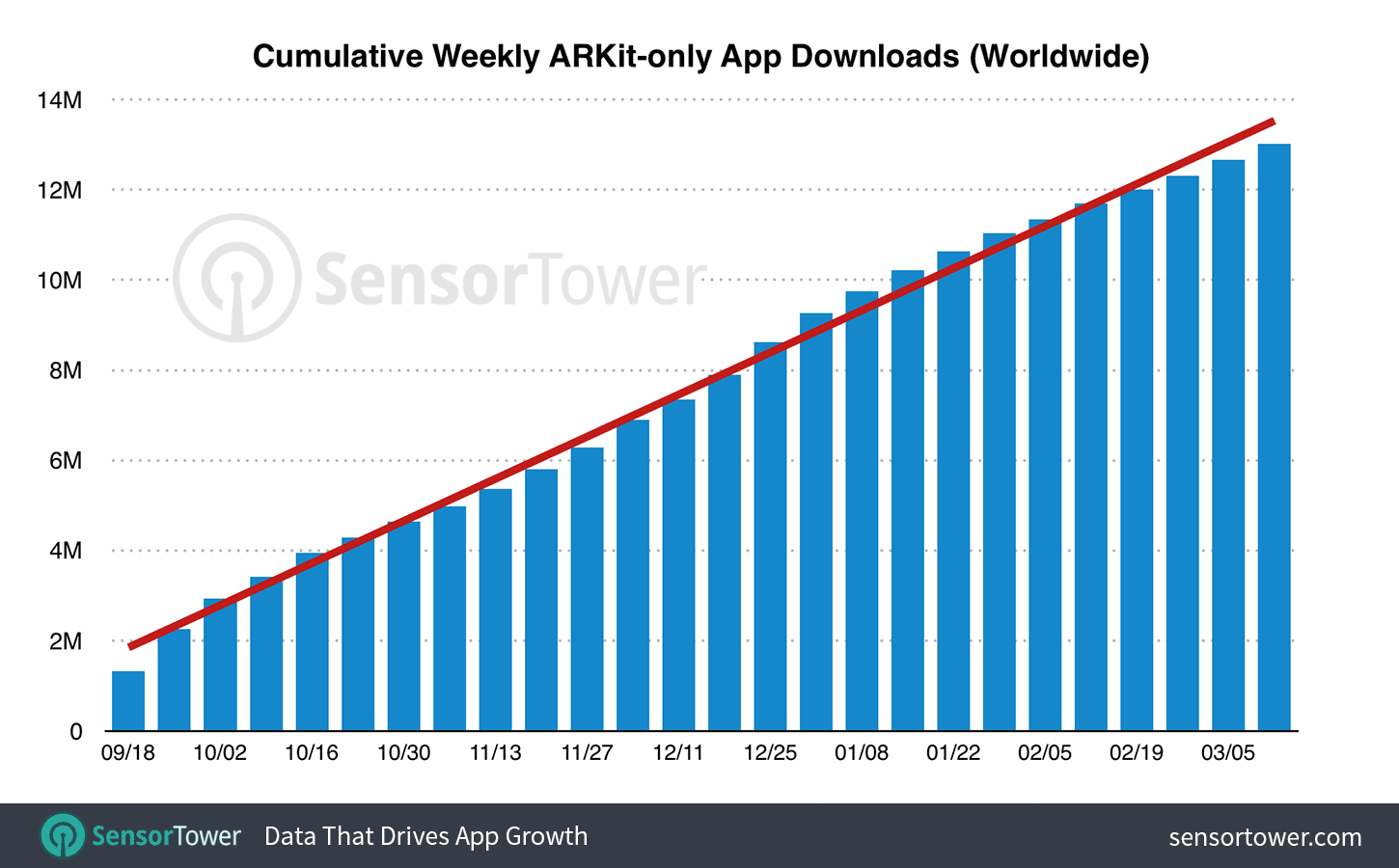 When we first looked at the state of ARKit-only apps last October, one month after iOS 11 launched, their downloads had just surpassed approximately three million worldwide. Then, like now, these installs were led by Games, but their share of all ARKit-only downloads has grown substantially in the past half-year from 35 percent to 47 percent—or almost half of all installs. 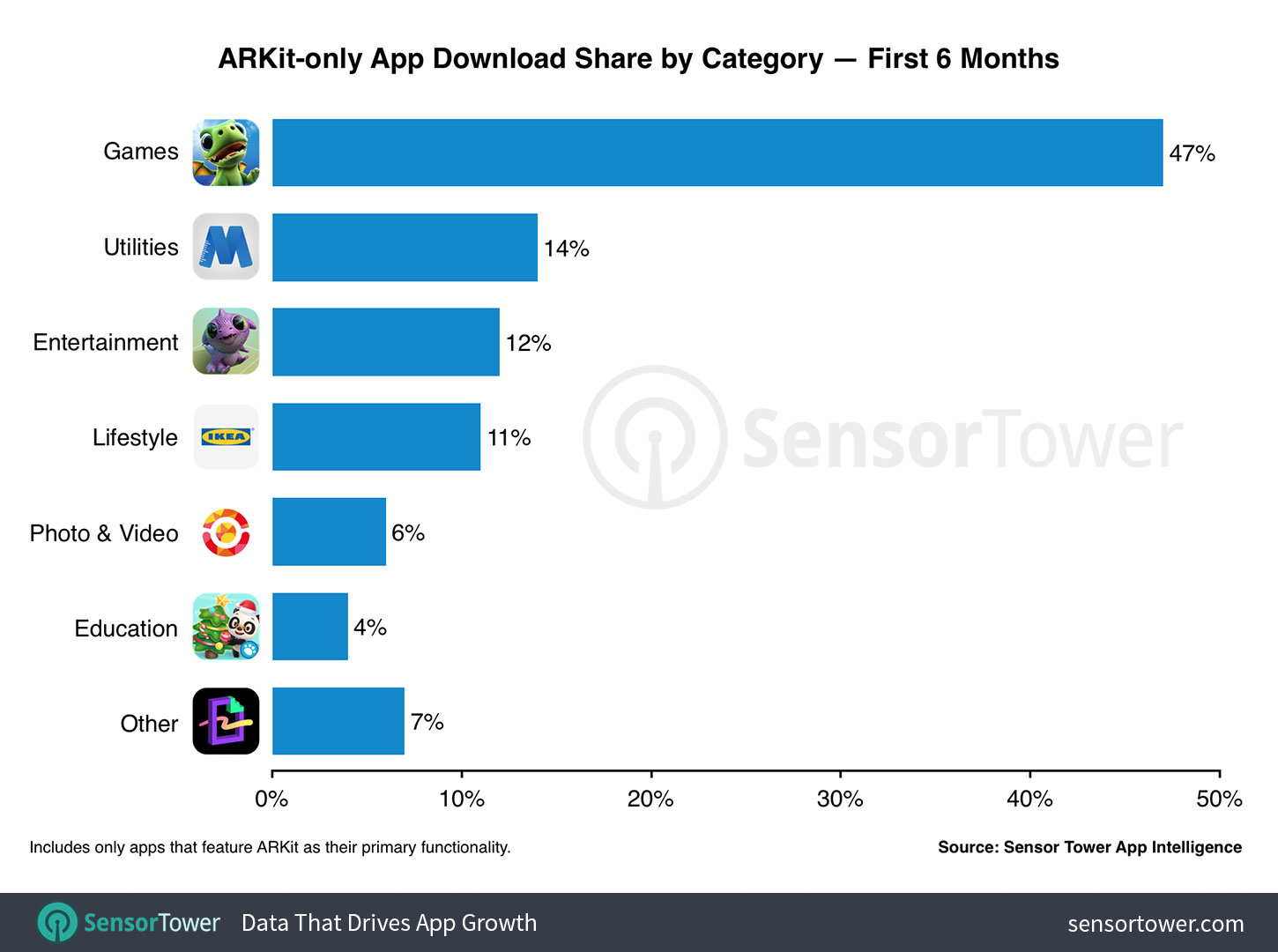 The share of downloads coming from second-place Utilities decreased from 19 percent to 15 percent during the intervening time since our original analysis, while Lifestyle more than doubled its share from 5 percent to 11 percent.

One of ARKit's early successes, AR Dragon from Australia's PlaySide Studios continued to lead downloads among ARKit-only apps for the duration of the framework's first six months of availability. In terms of paid app downloads and overall revenue, those categories were led by CamToPlan Pro, an premium AR-based measuring app from developer Tasmanic Editions intended for builders and interior designers. 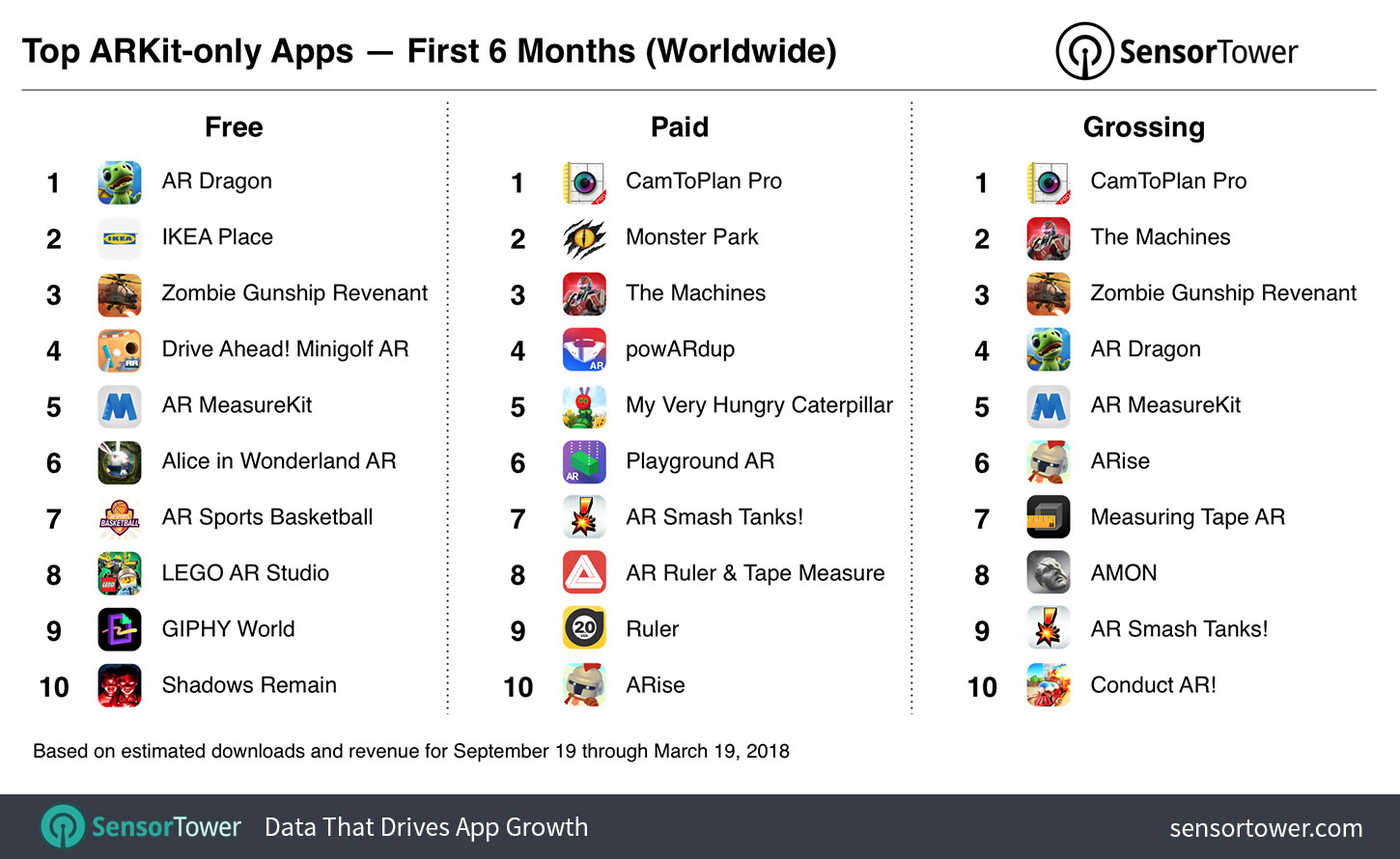 Other apps that established themselves as standouts early on, such as IKEA Place, GIPHY World, The Machines, and My Very Hungry Caterpillar AR, continue to be among the most-downloaded since last fall.

Breaking out the largest category of ARKit-only apps, Games, we see that the top 10 free, paid, and grossing rankings feature many of the same games that were popular six months ago, with some notable additions. Of particular note is Shadows Remain, from Fruit Ninja and Jetpack Joyride studio Halfbrick, which placed at No. 6 overall among free ARKit-only games. 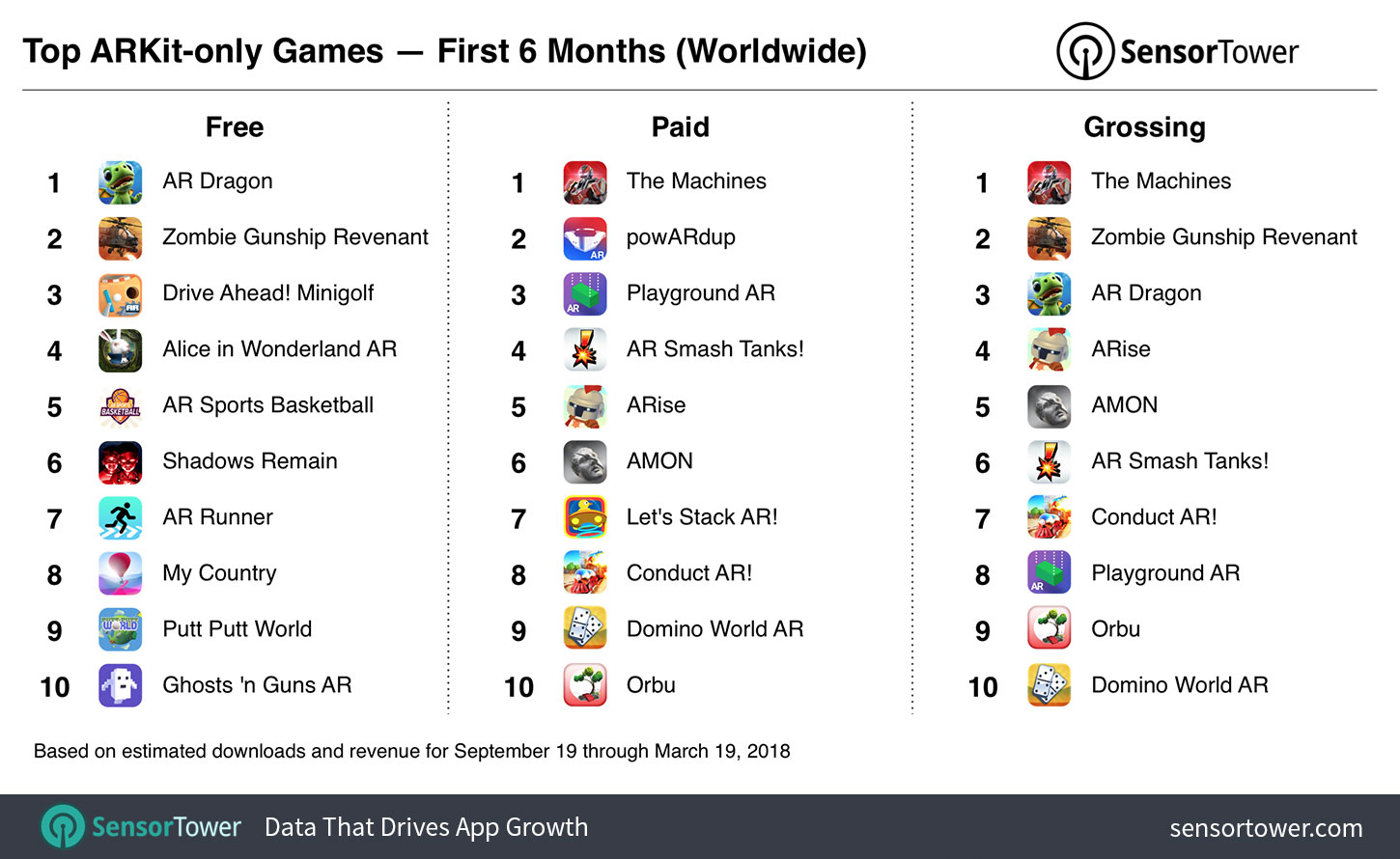 The top spots of all three game charts were still occupied by many of the same tiles that found success several months ago, namely AR Dragon atop the free ranking and The Machines at the summit of both the paid and grossing lists. In fact, three of the top five grossing games are unchanged from last October, although the top 10 overall contains three titles not present back then: AR Smash Tanks!, Playground AR, and Orbu, all of which have received substantial promotion in the App Store's AR games subsection.

Finally, looking at non-game apps specifically, we see that half of the top 10 free entries on the ranking are newcomers since our last analysis, including LEGO AR Studio at No. 3, a testament to the popularity of kid-focused AR content on the App Store thus far. 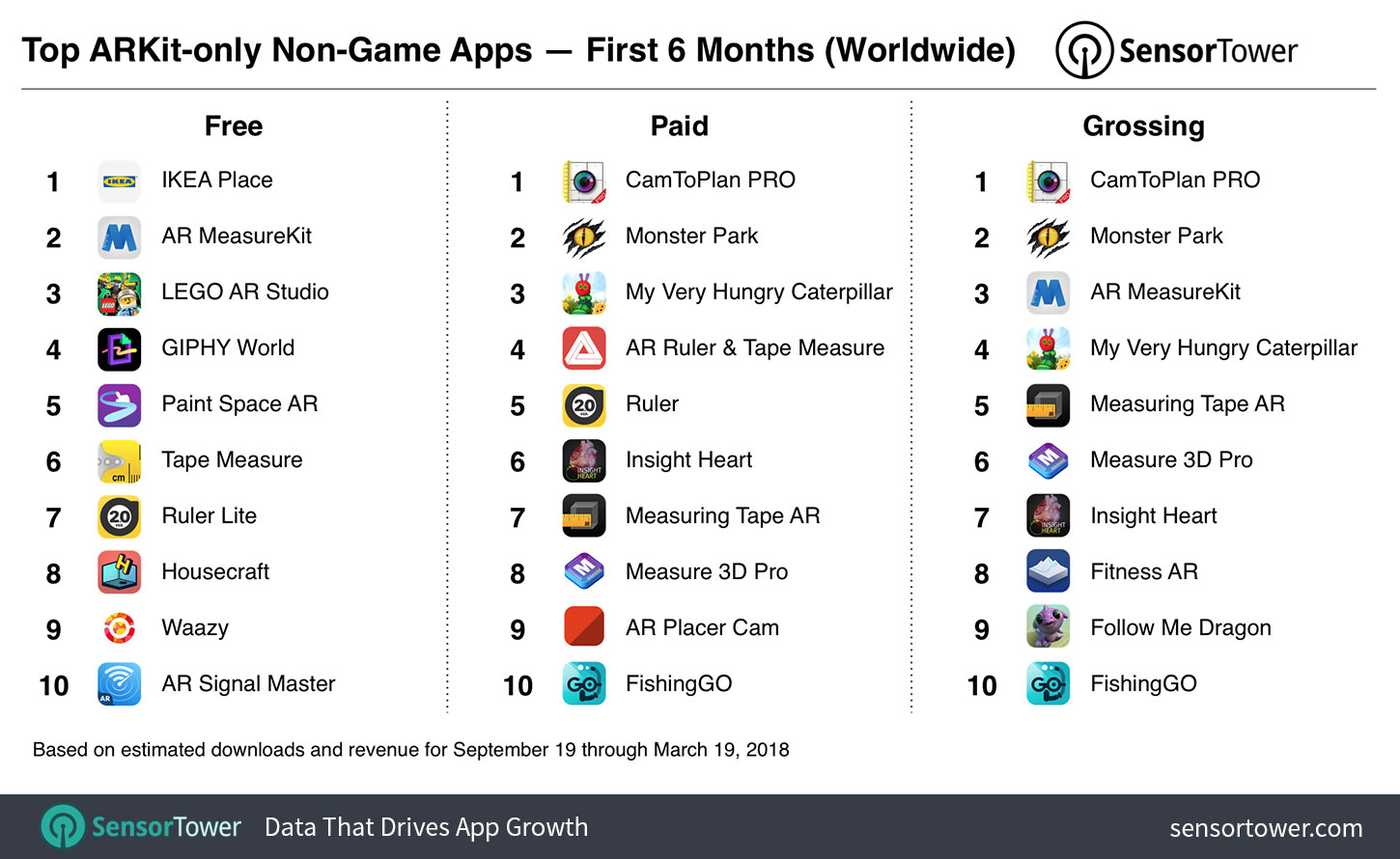 Paid and grossing top apps have skewed predominantly to the Utilities category, led by apps such as the aforementioned CamToPlan Pro and multiple augmented reality rulers.

The (Augmented) Reality Is Bright

From what we've seen in our latest analysis, ARKit-only apps only continue to grow in terms of installs and the number of experiences available to users. This isn't including the numerous ARKit-compatible apps that have added some degree of AR functionality in the past six months and have pushed the number of AR apps on the App Store well beyond 2,000 to date.

There's clearly substantial room for growth in terms of user base and revenue, but also ambition when it comes to this burgeoning category, and the apps above have built a solid foundation for what's to come, especially as the capabilities of ARKit evolve and expand with future versions of iOS.

About This Data: Sensor Tower defines "ARKit-only" apps as those primarily focused on the AR experience. Our analysis did not look at apps offering limited ARKit content, such as AR photo modes, mini-games, and other ARKit-based features added onto otherwise traditional apps.