Squid Game, the hit TV show which pits 456 players against each other in a series of life and death games for the chance to win a life-changing ₩45.6 billion cash prize, became an instant global sensation when it launched on Netflix in September 2021. The series became Netflix’s most-watched series on its streaming service, and during its first 31 days of the show’s launch, Netflix app downloads grew 30 percent month-over-month and 23.5 percent year-over-year.

YouTuber MrBeast rode the wave of the show’s enormous popularity and capitalized on that with a real-life version of the series, without the bloodshed of course. As in the series, 456 players took part in–for the most part–the games that appeared in the show for the chance to win $456,000. The event was sponsored by Brawl Stars publisher, Supercell.

In the six days that followed the YouTube video’s release–which has racked up more than 100 million views–worldwide downloads for Brawl Stars grew by 41 percent W/W to 1.4 million. Growth in installs were largely driven by the U.S., where downloads rose by approximately 350 percent W/W to 263,000. Player spending was also up, rising by 54 percent W/W worldwide to $8.2 million, while revenue in the U.S. surged by 65 percent W/W to $2 million. During this time, the annual Brawl Stars World Finals took place on November 26 to 28, which may have also helped drive installs. 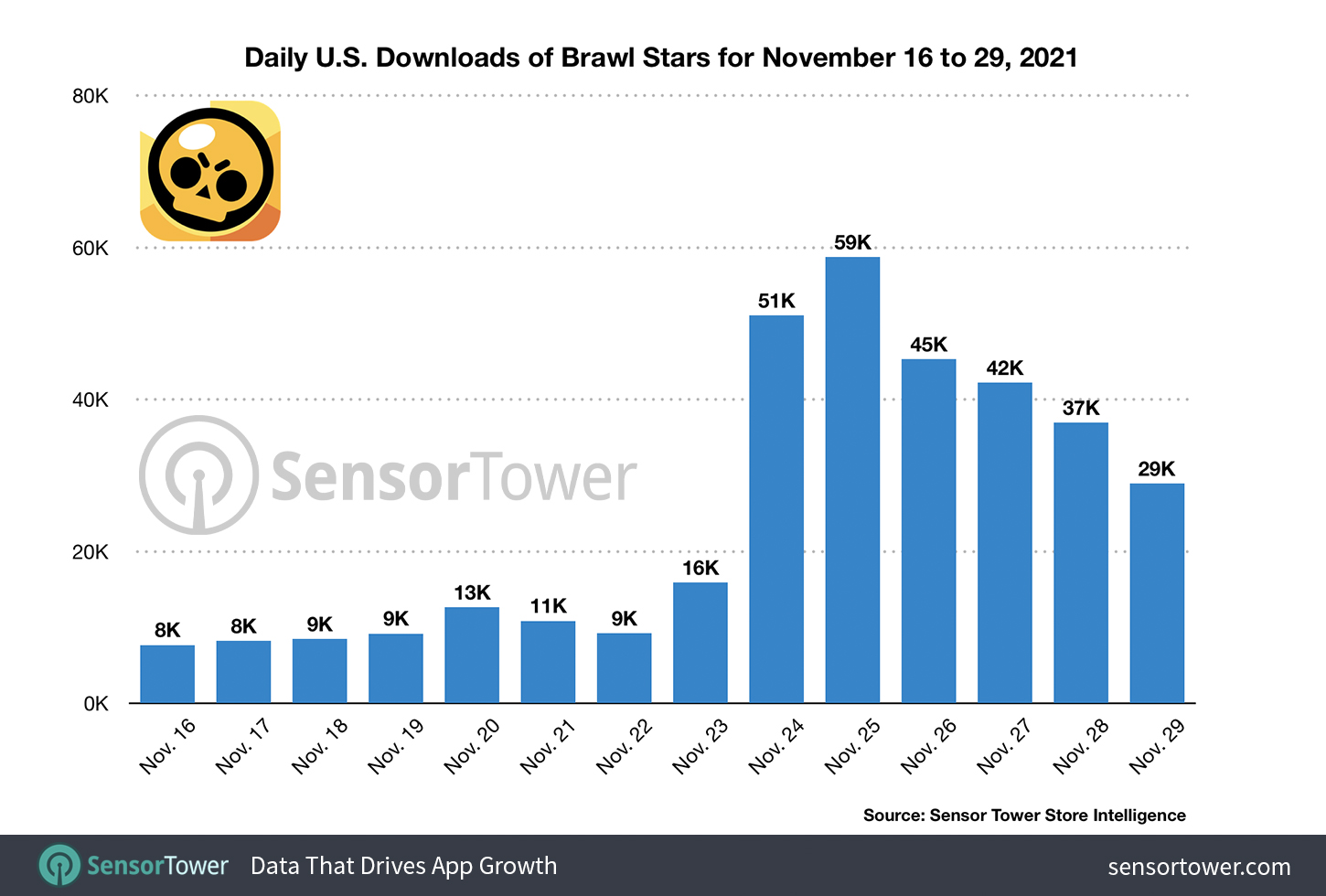 To date, Brawl Stars has accumulated approximately 324 million downloads globally. Russia ranks as the game’s No. 1 country for downloads, picking up 38.6 million installs, or approximately 12 percent of the total. It’s followed by Brazil at No. 2 and Turkey at No. 3. The U.S. ranks No. 4 with 21.5 million installs, or 6.6 percent of the game’s all-time total.

Supercell’s hit title has accumulated $1.4 billion in lifetime player spending globally to date. The U.S. takes the top spot for revenue, generating $209.7 million in player spending, or approximately 15 percent of the total. South Korea ranks No. 2 for revenue, while Germany rounds out the top three.

Off the back of the show fast becoming a cultural phenomenon, mobile titles inspired by Squid Game flooded the market in October, with top apps such as Candy Challenge 3D from Idil Morgul, Cookie Carver from Azur Games and 456 from Abi Game Studio all reaching the top 10 overall downloads rankings globally last month, picking up a combined 53.2 million installs. While these titles were quick to ride the hype, it appears an appetite for Squid Game content remains, with MrBeast’s video tapping into the franchise's popularity two months after its launch to great success. Brawl Stars’ sponsorship of the event is also an example of the innovative possibilities that exist in influencer marketing for the right partnerships to produce powerful synergies.