Disney's much-anticipated entrance into the streaming video on demand (SVOD) market has resulted in a record launch for such a service on mobile. Sensor Tower Store Intelligence data reveals that, since its debut in the United States and Canada on November 12, the Disney+ mobile app has been installed by an estimated 28 million App Store and Google Play users across five countries, which also include Australia, New Zealand, and the Netherlands.

Sensor Tower estimates that 4 million of these installs have converted into paid mobile subscriptions to the service thus far from an initial seven-day free trial. These subscriptions, which include both monthly and annual billing options, have generated approximately $55 million in mobile spending for Disney+ across all markets.

Disney Lands Far Ahead of the Competition

Disney+ represents the largest mobile launch for a new SVOD service since Sensor Tower began tracking app installs and revenue in January 2012. Netflix and Hulu's mobile debuts pre-date available data, but our research confirms their initial 30 days on mobile were also eclipsed by Disney's entry into the market.

As the chart below illustrates, the Disney+ app has also generated significantly more user spending during its first 30 days than competing SVOD apps did in the same period following their launches. 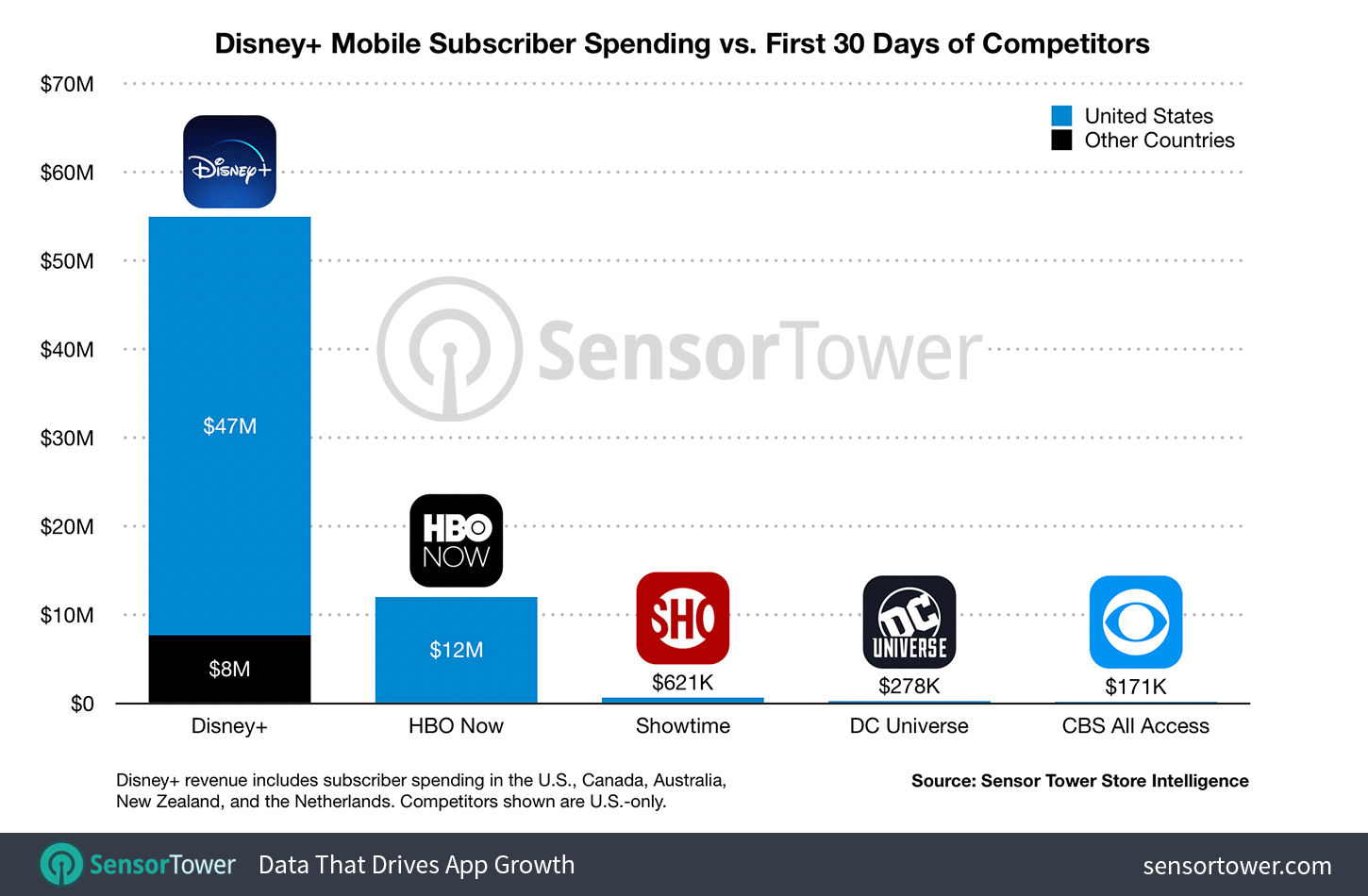 HBO Now, launched more than four years ago in April 2015 alongside the fifth season of Game of Thrones, had the highest earning first 30 days for an SVOD app prior to the debut of Disney+. Its total of $12 million in gross revenue, however, was just 22 percent of the sum generated by Disney+ over its comparable period. In terms of mobile subscribers, the 4 million added by Disney+ was approximately five times the 835,000 that HBO Now converted from free trials at its launch.

It's a Small World (For Now)

While Disney+ is off to an indisputably strong start in its current markets, it still has much (literal) ground to cover—and substantial room for growth. Close to 82 percent of those who've installed the app so far hail from the U.S. (just over 20 million downloads), and 86 percent of its revenue (approximately $46.8 million) has come from the country. Data on rival Netflix, however, shows that nearly 70 percent of its users and 54 percent of its all-time spending have come from outside the U.S. 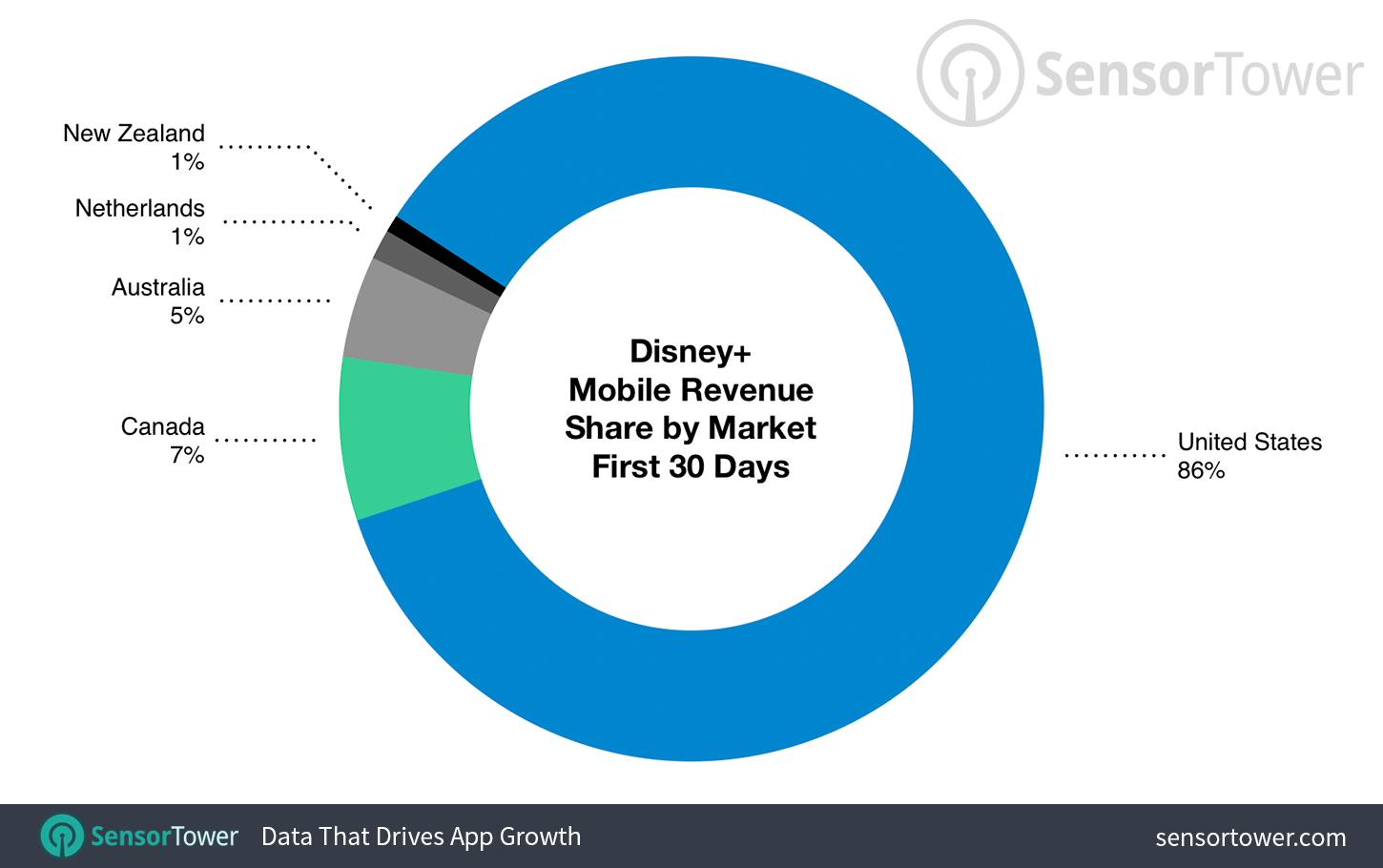 Given this, and the unprecedented demand already witnessed in existing markets, we see a significant opportunity for Disney ahead as it expands the service into new territories during 2020. First up is a cohort of seven European markets in the upcoming first quarter, including France, Germany, Ireland, Italy, Spain, Sweden, and the United Kingdom. These countries have accounted for approximately 15 percent of rival Netflix's subscriber revenue on mobile. Based on Disney's historically prodigious brand and content popularity outside the U.S., we expect these markets—and Asia, at a later date—to contribute a markedly larger share of both downloads and revenue to the Disney+ mobile coffer when the service launches in them.

We'll continue tracking Disney+ and analyzing its growth on mobile as it rolls out across these (and additional) markets throughout 2020.