This represented a 22.8 percent year-over-year increase in gross revenue from 2020, based on consumer spending for in-app purchases, subscriptions, and premium apps. The COVID-19 pandemic continued to impact life across Europe, with countries experiencing varying levels of social restrictions amid the surge of variant strains such as Delta and Omicron. European spending accounted for approximately 14 percent of global mobile app revenue in 2021, which reached $131.6 billion.

In this report, we delve deeper into mobile non-gaming and gaming app revenue and download figures, and identify which countries are driving the region’s markets forward.

Overall, the App Store accounted for 53.5 percent of user spending in Europe during the past year, with Google Play making up the remaining 46.5 percent. 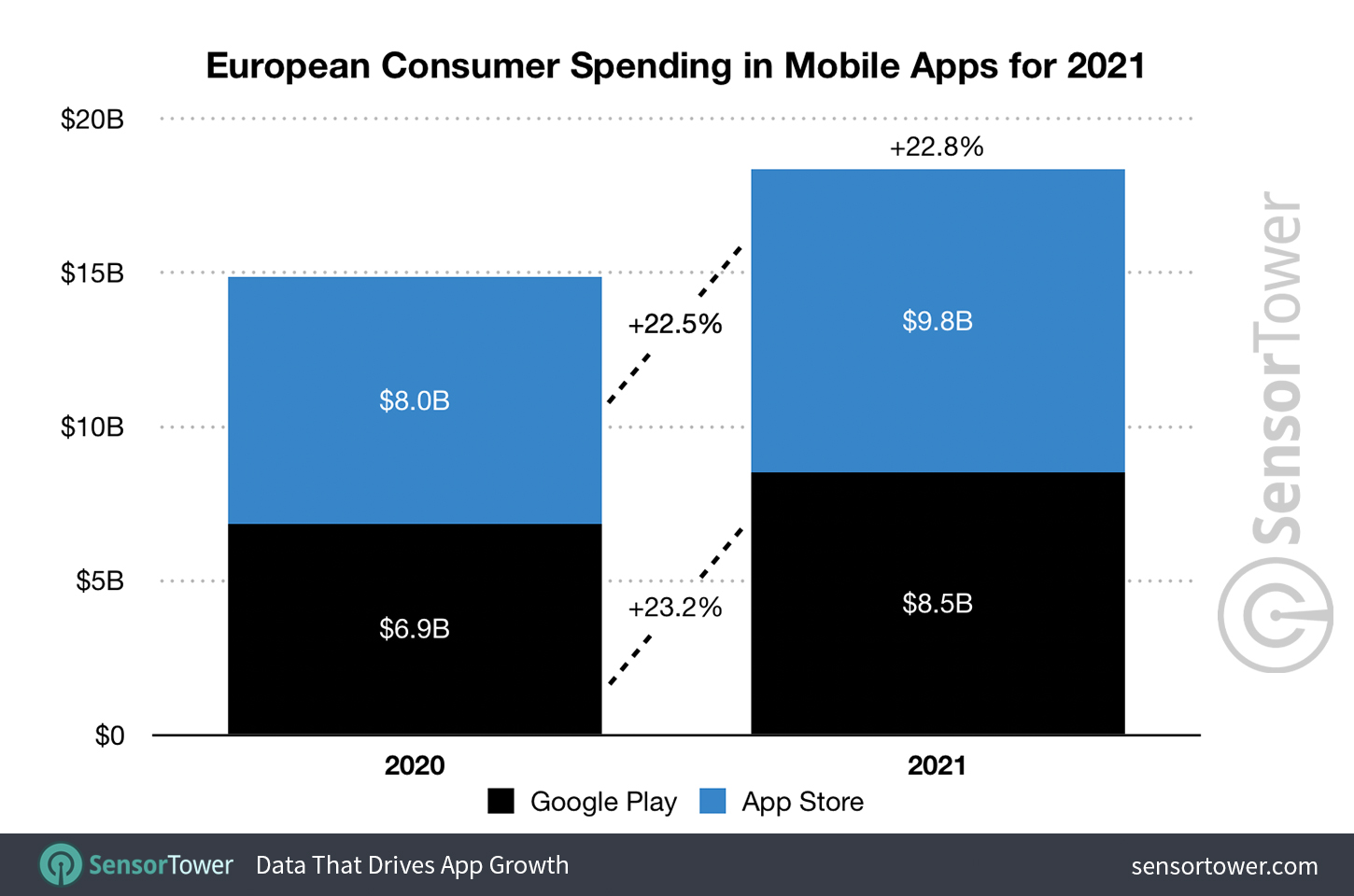 When it comes to downloads, the App Store and Google Play accumulated a combined 27.4 billion unique installs in 2021, down 3.9 percent Y/Y.

As is typically the case globally, Google Play drove a greater number of downloads than the App Store, amassing more than 20.2 billion installs in Europe during the past year, a decrease of 4.3 percent Y/Y. The App Store generated 7.2 billion downloads, marking a decline of 2.7 percent Y/Y.

Google Play accounted for 73.7 percent of all downloads, while the App Store made up 26.3 percent. 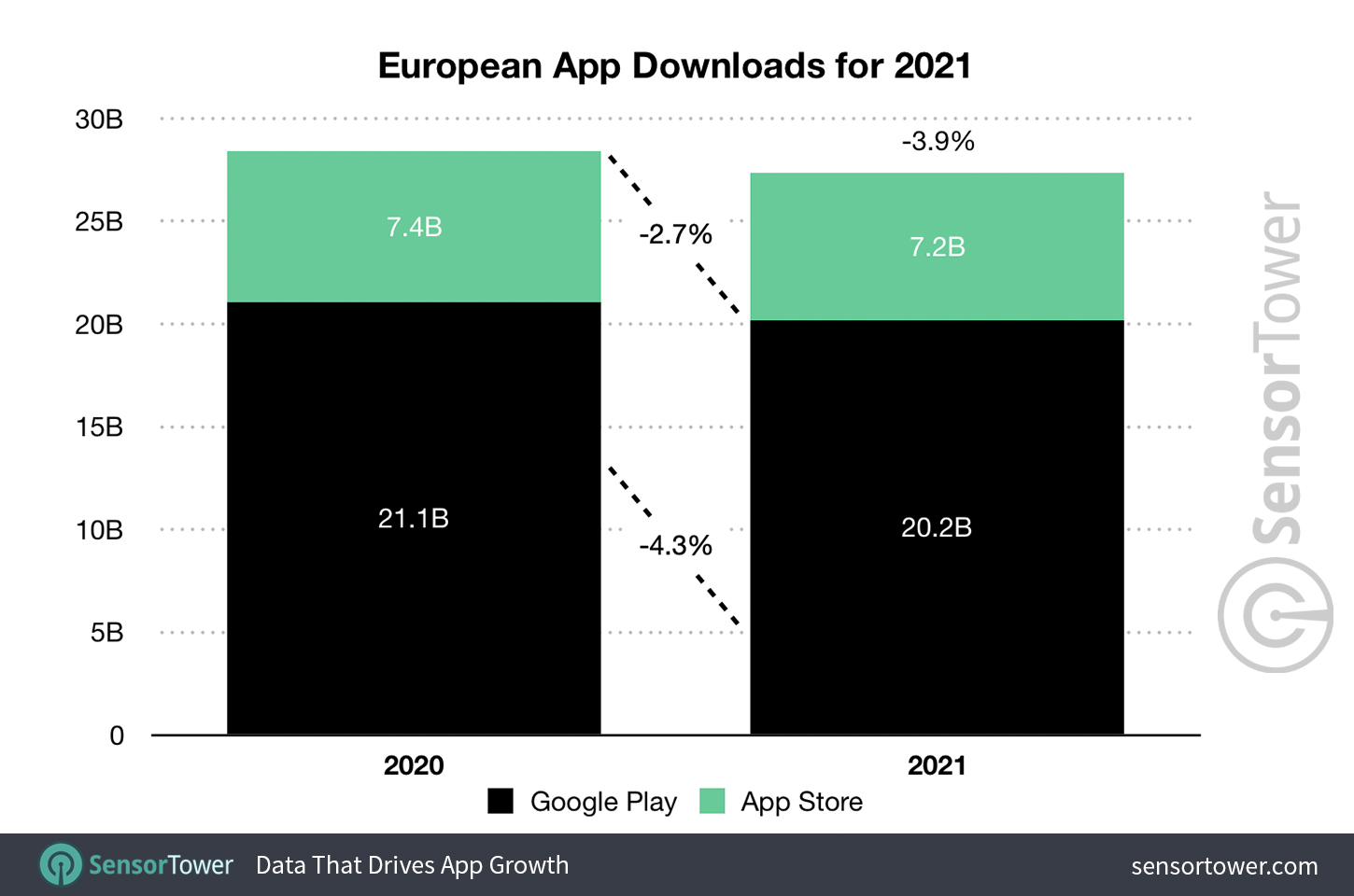 The European country that drove the most app revenue in 2021 was the United Kingdom, generating $3.5 billion in user spending across the App Store and Google Play, up 23.2 percent Y/Y. Germany was close behind with $3.4 billion, an increase of 22.5 percent, while France ranked No. 3, having accrued $2 billion, up 14.7 percent.

The U.K. represented the largest share of App Store revenue in Europe with $2.3 billion, or 23.6 percent of all user spending on the store. Germany, meanwhile, ranked No. 1 for Google Play revenue, generating $1.8 billion, or 21.6 percent of the total. 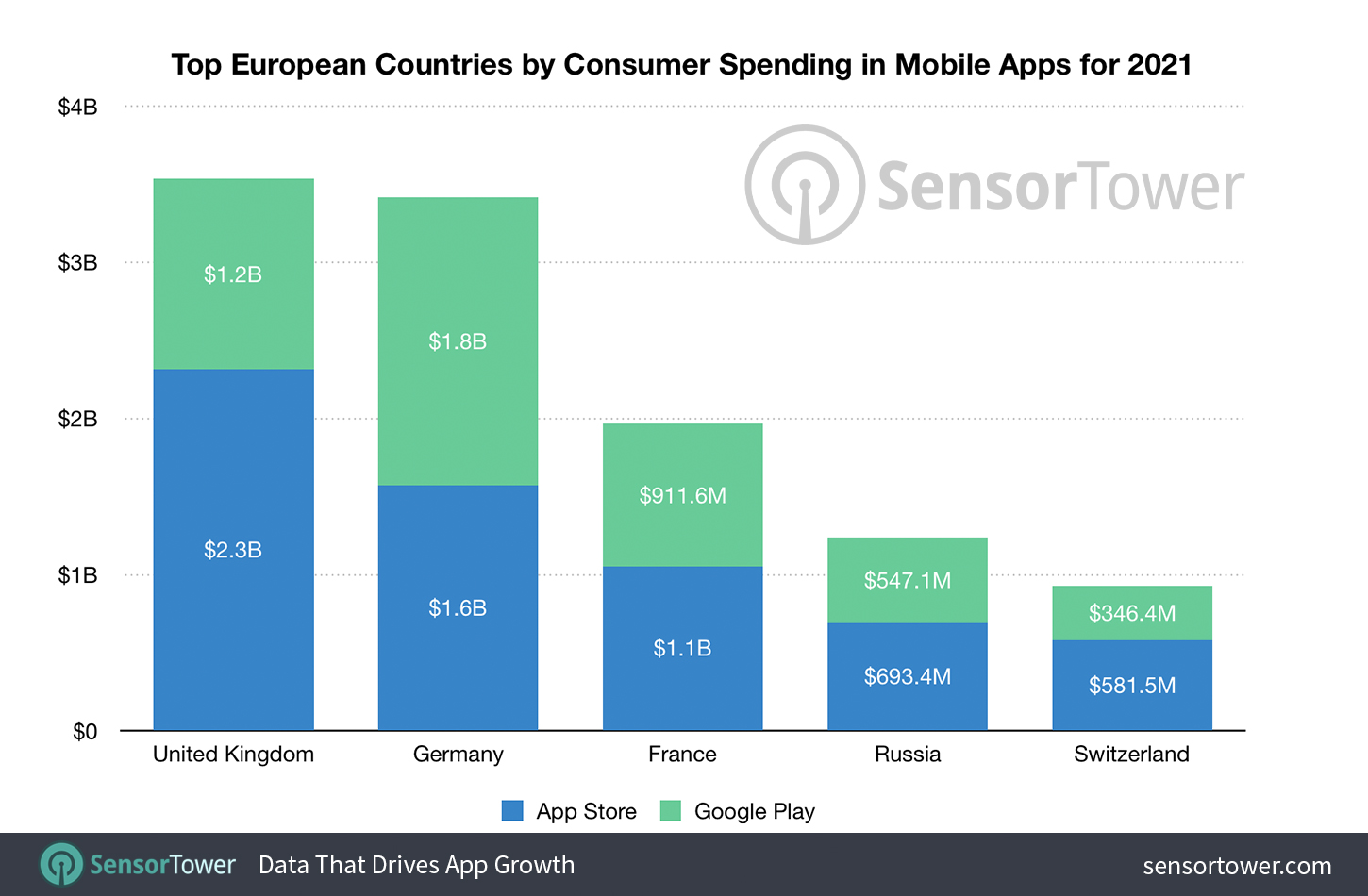 Most of Russia’s downloads came from Google Play, where it accrued 4.8 billion installs, or 23.7 percent of all downloads on the store in Europe. The U.K,, meanwhile, led the way on the App Store with 1.3 billion downloads, or 17.8 percent of the total.

Dating app Tinder was the top grossing non-gaming app in Europe in 2021, generating approximately $392 million in user spending, ahead of the No. 2 app Disney+ and TikTok at No. 3. 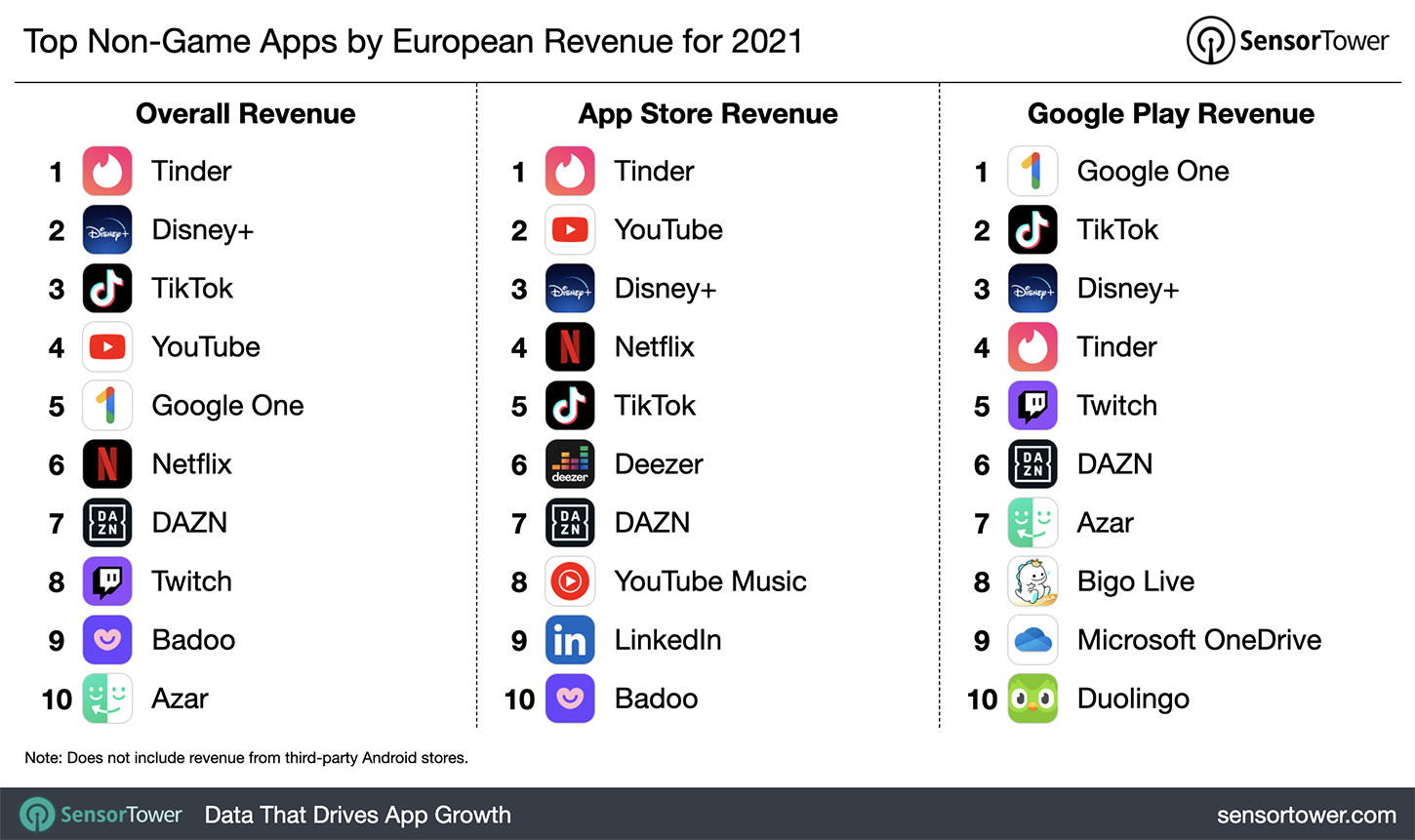 TikTok was once again the No. 1 most downloaded app in Europe, generating close 102 million installs in the region. It was followed by messaging platform WhatsApp at No. 2, and private messaging app Telegram at No. 3. The latter garnered 78.5 million, a rise of more than 7 percent Y/Y, as concerns around privacy and how data is shared continued to be a prominent concern for a number of mobile users over the past year. 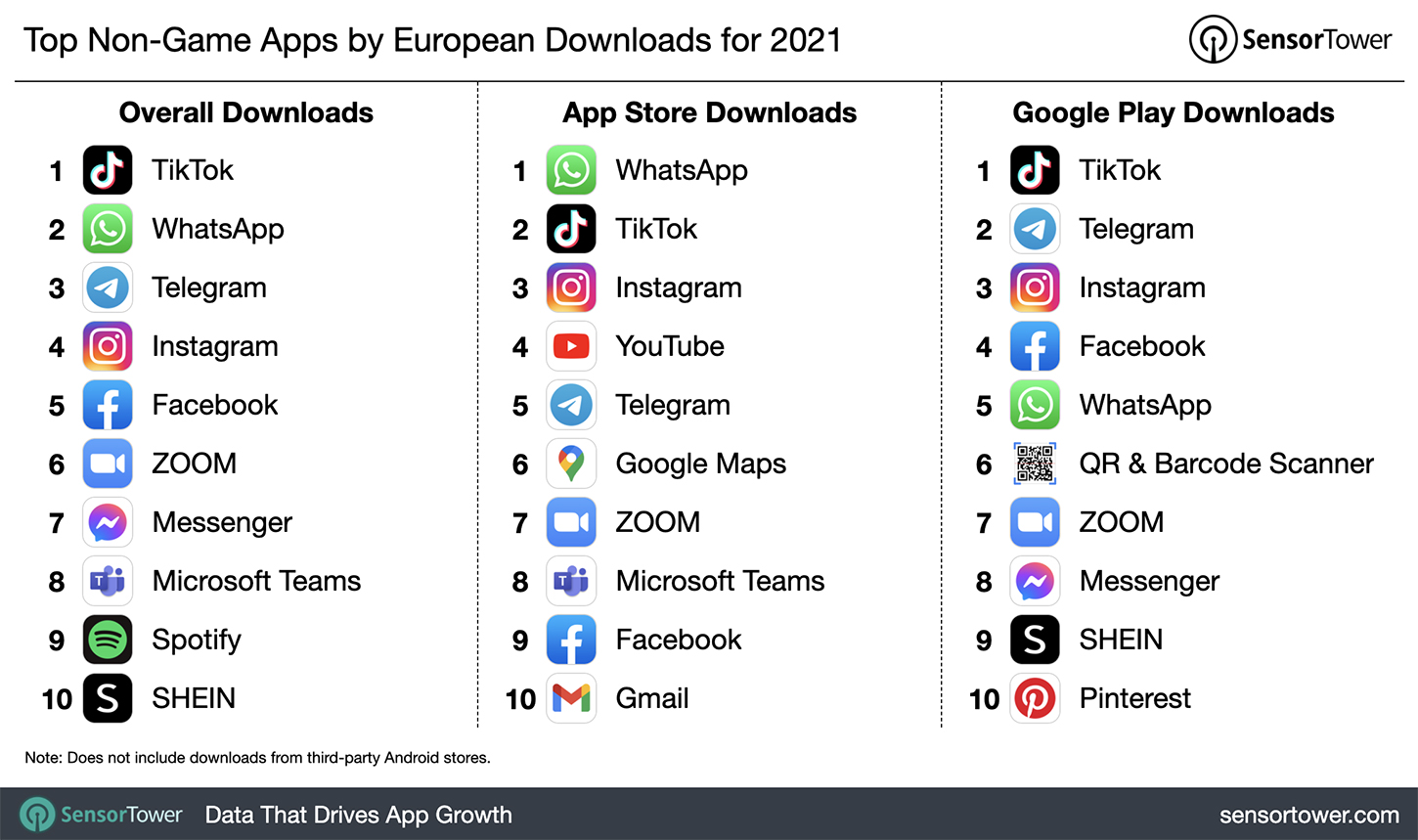 Mobile games generated $11.2 billion in Europe in 2021, an increase of 16.7 percent Y/Y. In total, games accounted for approximately 61 percent of all mobile app revenue in Europe based on user spending. That’s down from a 64.8 percent market share in 2020, with categories such as Entertainment and Social Networking growing faster when it comes to revenue. Globally, European player spending in games accounted for approximately 12.7 percent of the global mobile games market.

Germany was a key driver for Google Play game revenue, with player spending on the storefront representing $1.3 billion, or 24.2 percent of all mobile game revenue in the country. The U.K, ranked No. 2, while France ranked No. 3. 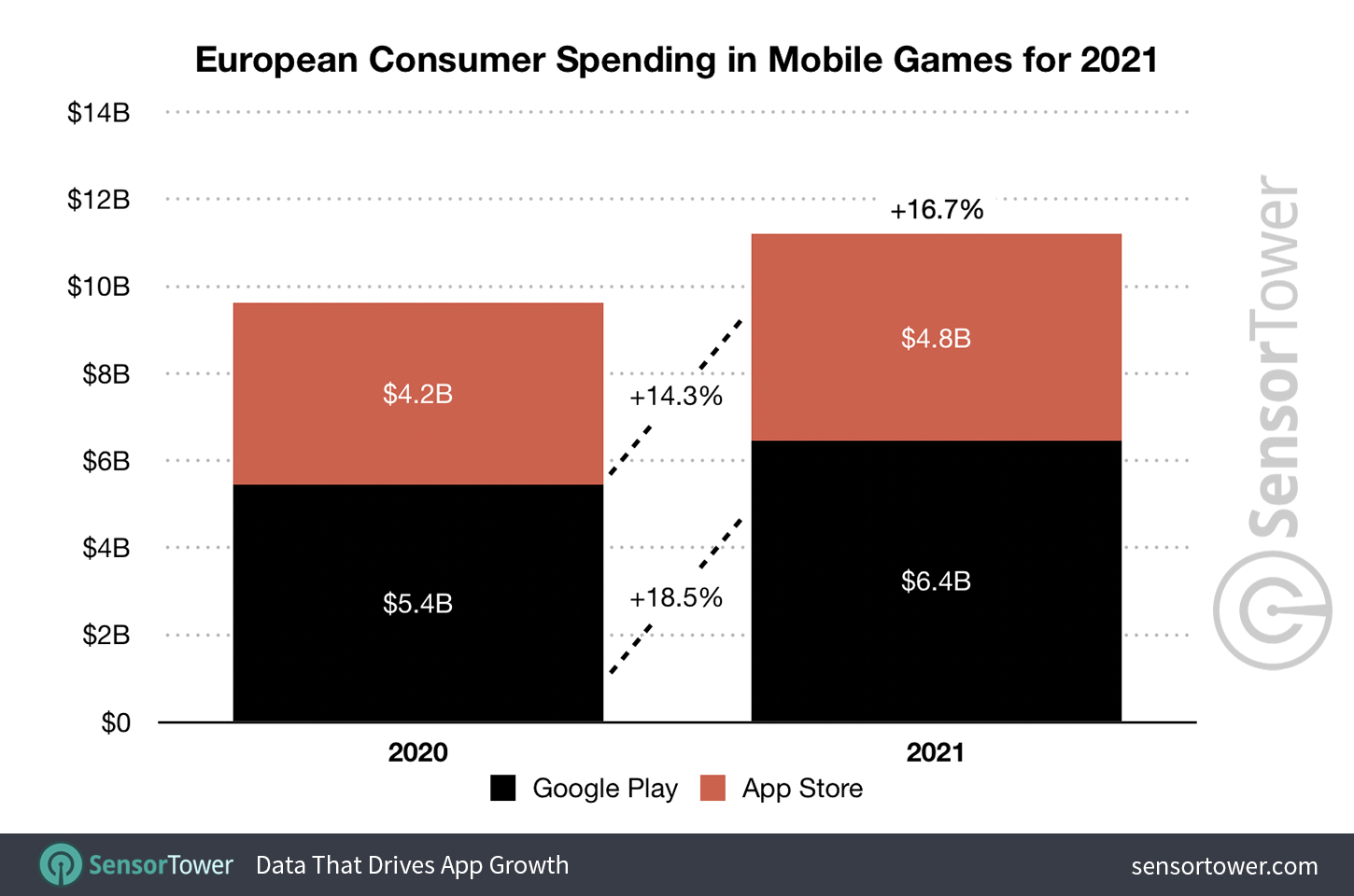 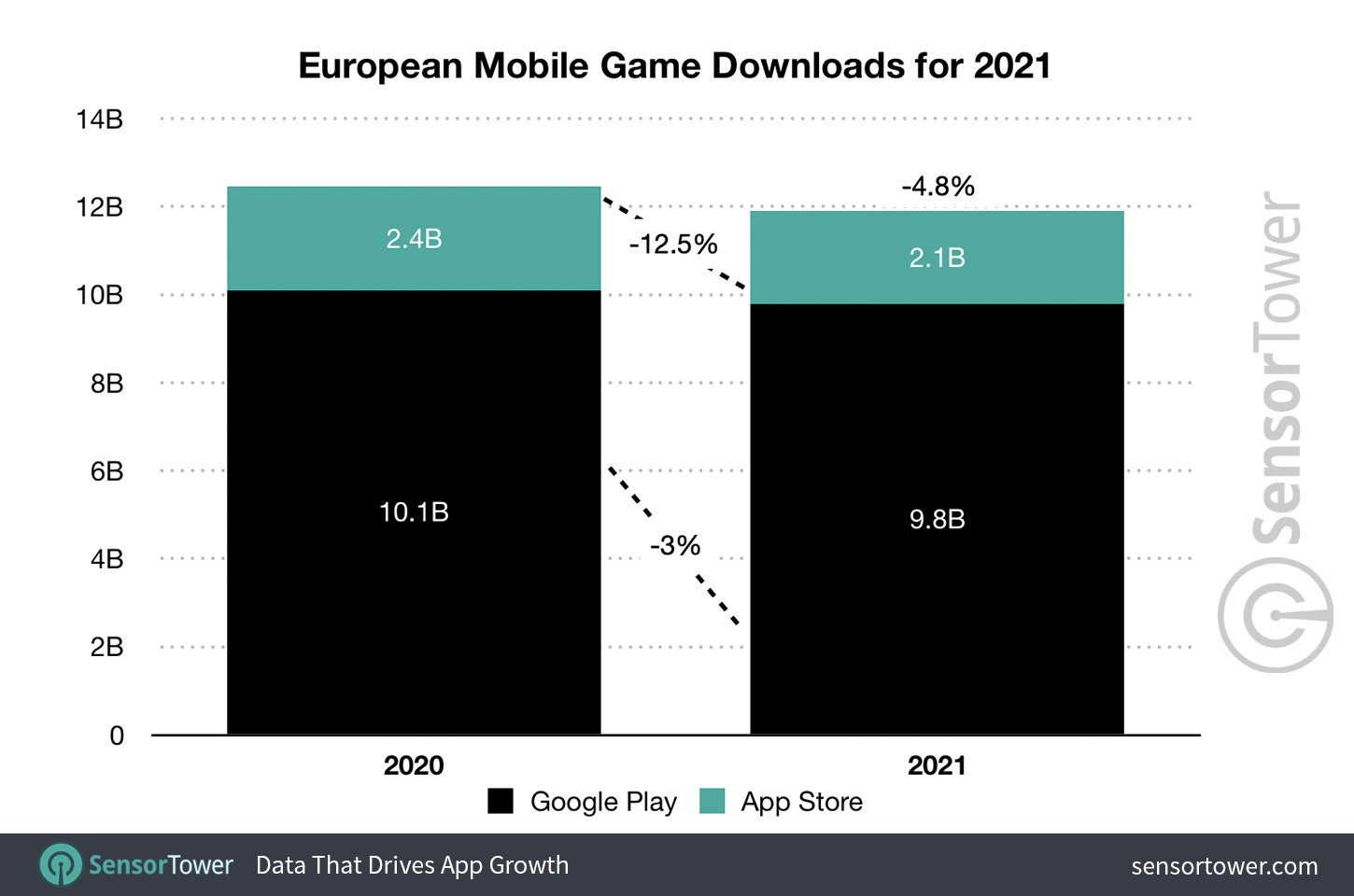 PUBG Mobile from Tencent took 2021’s crown as the top revenue generating mobile game with $404.2 million in player spending, up 58.3 percent Y/Y. That was higher than Coin Master from Moon Active, which accumulated more than $392 million, and Roblox from Roblox Corporation, which grossed approximately $264 million.

PUBG Mobile was also the fastest growing title in Europe’s top 10 grossing rankings. It was followed by State of Survival from FunPlus, which saw a 51.4 percent increase in player spending on mobile Y/Y, and Roblox, which saw 29.4 percent revenue growth. 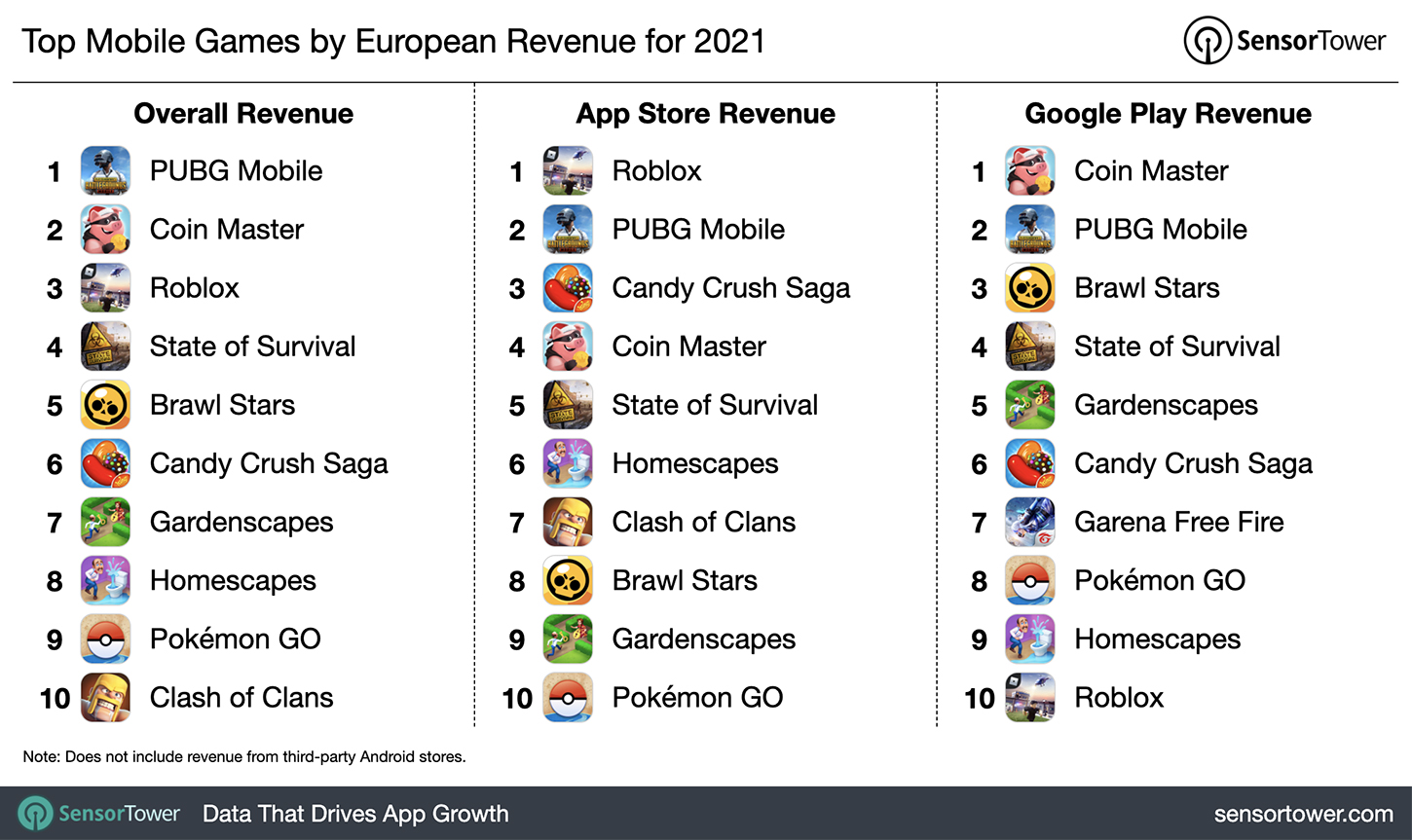 Count Masters from Tap2Play topped the European game downloads chart with 38.2 million downloads in 2021. Of the top 10 most downloaded games, five were hypercasual titles. 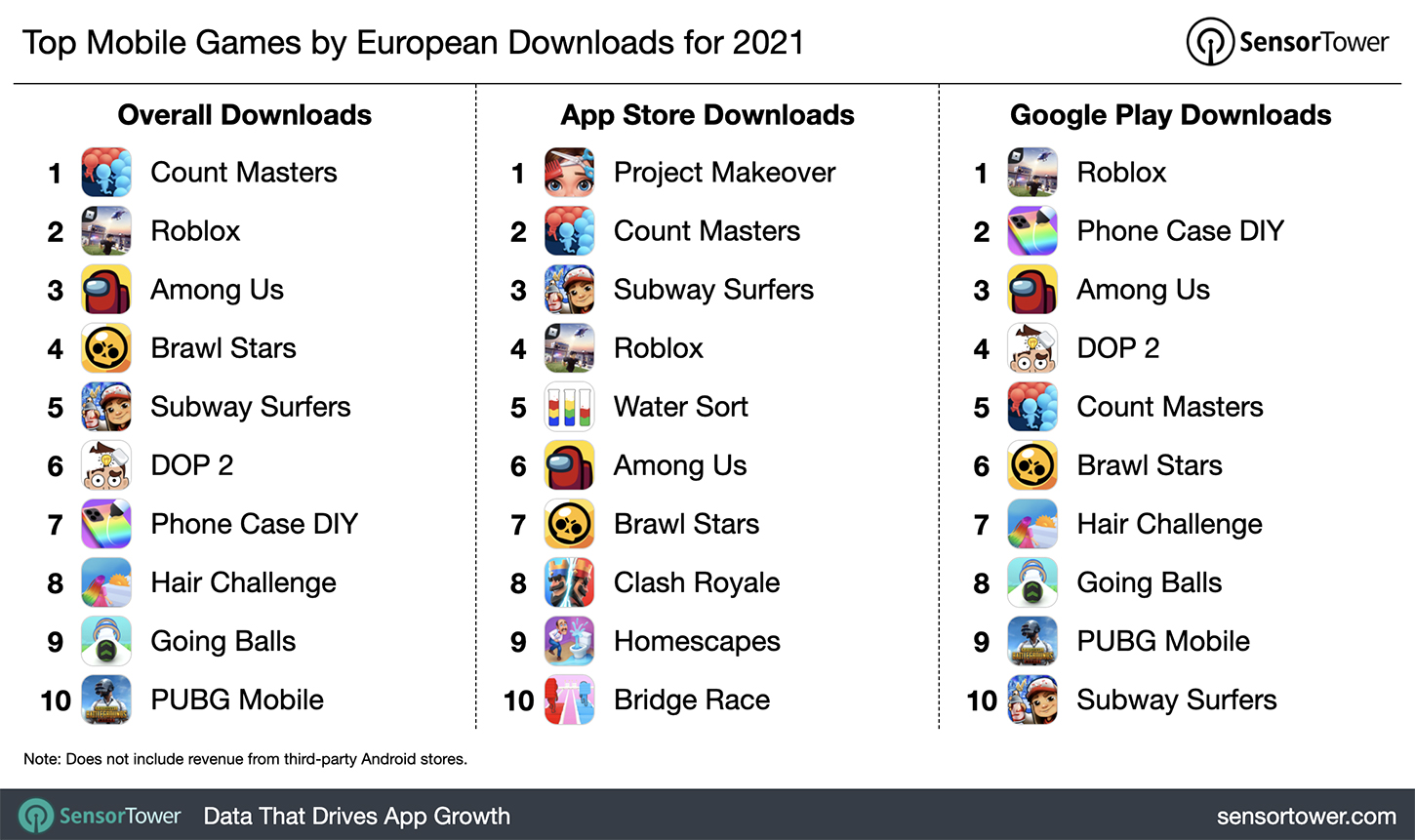 As with the rest of the world, Europe continues to feel the impact of the COVID-19 pandemic, with numerous countries entering varying levels of social restrictions throughout the year amid surges of the virus’ variants. Some of the key trends from the start of the pandemic have continued, with consumer spending continuing to rise despite an outsized 2020, though overall app downloads have slowed. Revenue in categories such as Entertainment and Social Networking has risen significantly, up by 54.2 percent and 34.4 percent, respectively, as consumers continue to use their phones to find fun, connect with others, and also for their daily essentials.