We see more and more apps adding keywords to their app title, but there are still a lot of apps that have not done it yet. Sure, your app title doesn't look as pretty when you add a description after it, but as this post will show, it can give you an advantage over apps that do not use this strategy.

Before we get started, if you are not familiar with the difference between the App Name and the Bundle Display Name, be sure to read this post on common naming mistakes. In the rest of this post, we will be talking about the App Name field in iTunes.

Adding keywords to your app title gives your app two advantages. First, the keywords in your title tend to help you rank higher in searches for those keywords, compared to if you used the same keywords in your regular keyword list. We will show you a few case studies that will demonstrate this in a minute.

Second, you get more keywords that you could potentially rank for. You are not only limited to the 100 allowed characters in the iTunes keyword field. This can provide much better search visibility for your app, compared to apps that do not do this.

Keep It Relevant And Readable

Although adding keywords to your app title can help you rank for important App Store search keywords, your app title must also pass the human readability test. You cannot just "keyword stuff" your app title and expect it to get it accepted by Apple.

Work your keywords into a natural sentence that will help a person figure out what your app is about. One good example is the Omvana app.

We interviewed Sensor Tower customers Kshitij Minglani and Grayson Smith of Mindvalley Mobile, makers of Omvana, back in August and we discovered that they do a lot of App Store Optimization testing. The complete name of their app is: Omvana - Meditation & Relaxation sounds for better Sleep, Nap, Focus, Yoga & Inspiration.

All this testing has paid off and if we look at their app title specifically, they currently rank in the top 10 for 8 out the 10 keywords that are in their title. The app ranks in the top 27 for the other two keywords.

(Not) Clash of Clans

As you probably know, we like Clash of Clans not only because it is a great game, but also because they do an excellent job with their App Store keywords. However, they are not going to rank #1 for every single keyword.

No app will, no matter how many downloads it has. In fact, as successful as Clash of Clans is, it only ranks #1 for 4 keywords.

So let's look at the apps that outrank the mighty Clash of Clans for specific keywords and see if we can find a correlation between keywords in the title and ranking well for those keywords.

Before we get started, most of the other apps that we are featuring are pretty successful in their own right, so do not think that just putting keywords into your title will help you dominate a mega app like Clash of Clans. But it can certainly help you beat your competition and maybe even outrank some of the bigger apps, for certain keywords. 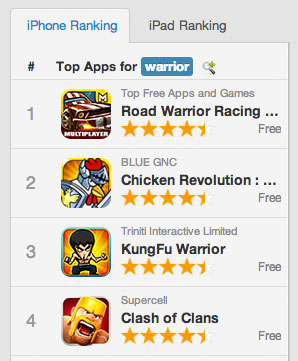 Clash of Clans currently ranks #4 for this keyword, but the three apps ahead of it all have the keyword in their app titles. The #2 app is called "Chicken Revolution: Warrior"

The app with the lowest Estimated App Worth is KungFu Warrior, at $231,830. KungFu doesn't have nearly as many ratings as Clash of Clans, although it is still pretty respectable, as apps go. This just goes to show that less successful apps can still compete for certain keywords. 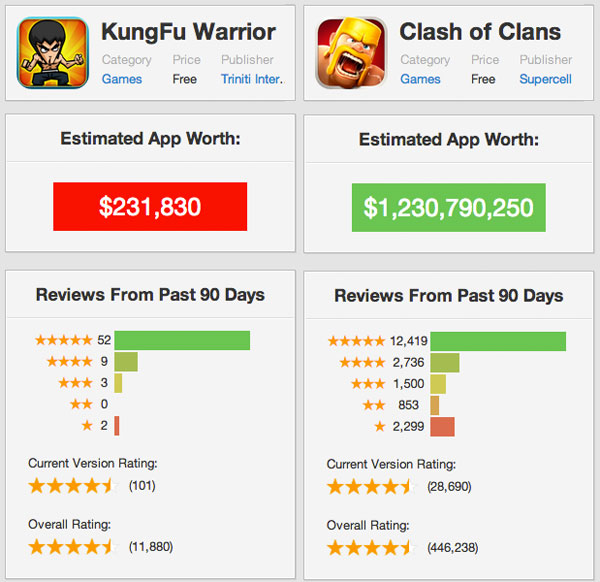 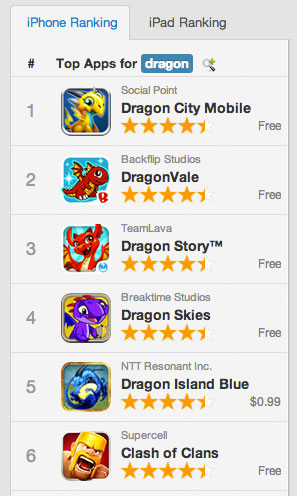 The five apps ahead of Clash of Clans for this keyword also have the keyword in their titles. They also all happen to have a picture of a dragon in their icons.

Alright, one last example. This keyword may not be obvious if you do not play games, but it is the abbreviation for "tower defense," which is a type of game. It is a great keyword because it is short and frequently searched for. But it is also pretty competitive. Just like we saw in the previous examples, every single app that ranks above Clash of Clans has the keyword in its app title. 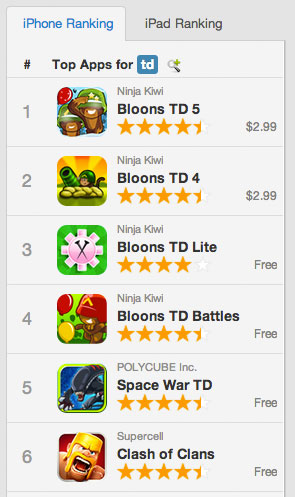 Another example of title keywords increasing search rankings was written about by Adam Grossman on the Dark Sky Journal Blog. Changing the name of his app resulted in a drastic improvement in the Dark Sky app rankings for relevant keywords. He makes fun of it a little because it is so simple, but as his graphs show, it can be very effective. 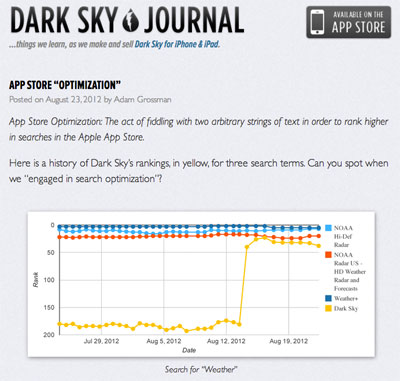 If you have not added keywords to your app title, give it a try and see how it affects your App Store search rankings and your downloads. Keep in mind that the App Store search algorithm may change in the future, but this is what we have noticed is working right now.

It can give you the advantage over other apps in your niche, but it can require testing and optimization to get it dialed in. Research, implement, track, review...repeat. Of course, you should also work on the other elements of App Store Optimization, but adding keywords to your title can be an easy win.

If you have not added keywords to your title yet, what reasons do you have for not doing so? Let us know in the comments below.