About the author: Robin Campbell leads marketing for Tapstream, an app marketing dashboard that tracks every install of your app and unveils where your most valuable users come from. He loves chatting business, travel and adventures. Catch him on Twitter.

Roping in new users to your app isn't an art. It's science. Some people find your app through the App Store and others through the interwebs. All the same, your first goal is to increase downloads. Once those users are cruising around inside your app, your second goal becomes keeping them around long enough to encourage the behavior you're looking for. The execution is the tricky part, but your approach doesn't have to be.

Increasing Downloads From Within The App Store - ASO

Increasing the likelihood of people finding your app through the App Store's organic search all comes down to choosing the right keywords and text for your app's description. Lucky enough, Sensor Tower has great tools to help you here. Use the Keyword Rankings tool to understand the traffic volume and competition (“difficulty”) of your app's relevant keywords, helping you select the best ones. A 10 means high traffic or competition and 0 is the absolute lowest.

And don't forget, your competition is playing this game too. Keep an eye on the keywords your competitors are using and how they rank in comparison to you. Ideally you want to find keywords with decent traffic volume and relatively low competition, illustrated by the green box.

Once you've chosen your keywords, monitor how your downloads and rankings change and adjust your keywords as necessary.

Pay Attention to Localization - It's A Big Deal In iOS 7

With the introduction of the Apps Near Me chart in iOS 7, Apple is helping users find apps that may be more relevant to them based on geography. As an app maker, this is big news and huge opportunity. By focusing your keywords to specific locations you can boost your ranking and attention in the App Store. Location specific keywords are usually low competition and help you get noticed by the Near Me algorithm. 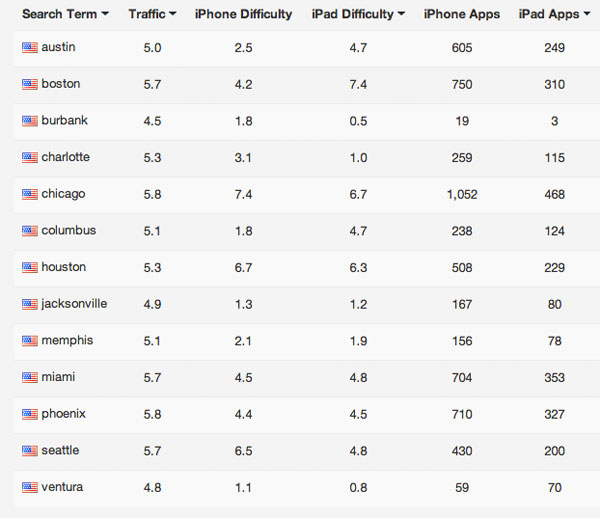 If your app has an opportunity to rank in a specific geographic area, then definitely give this a try. Getting attention in the Near Me charts could serve as a stepping stone to further ratings and reviews that boost your app up the charts.

Increasing downloads from outside of the App Store

App Store discovery is a big deal, but it's not the whole story. There's a big opportunity for your app to be discovered on the web as well, and the results are trackable. Beyond working on App Store keywords, an indie developer by the name of Michael Patzer was able to experiment with various app marketing channels and learn which delivered the most app users by using Tapstream.

By using Tapstream shortlinks in his social media and AdWords campaigns, Michael was able to track which links delivered not just the most clicks, but the most new app users. He discovered that social marketing wasn't a great use of his time and that AdWords was the most effective way to accumulate new users for his apps. 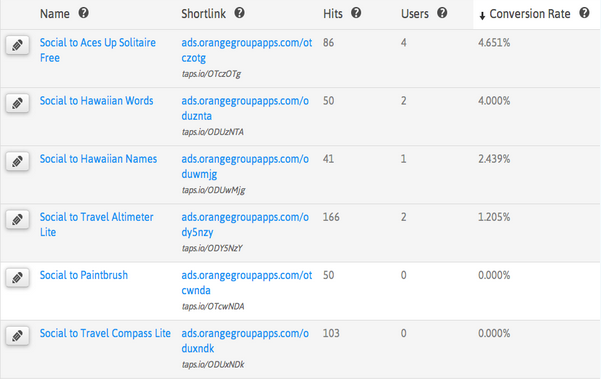 Here’s what Michael had to say:

"My conversion rates were nothing compared to the work I had to put in on these social channels…. It was a huge relief to know that stopping my social efforts would have zero impact on growing my app business." 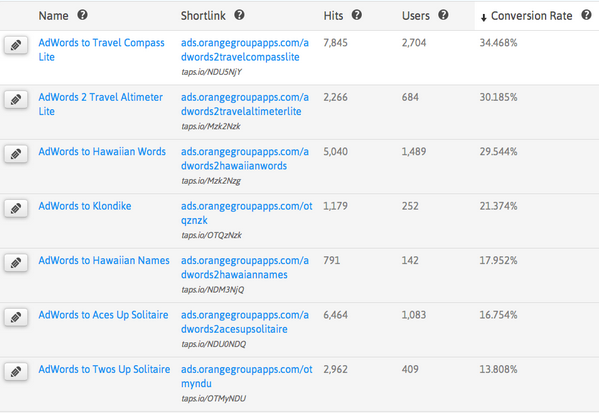 “AdWords is the single best way to advertise mobile apps. I had no idea how effective these ads were until measuring them with Tapstream. I now acquire about 80 - 100 new users each day via AdWords and spend only about $10 - $12/day.”

By using data to inform his app marketing decisions, Michael was able to save a significant amount of time and money.

ASO and web marketing work hand-in-hand to produce downloads and boost your App Store ranking. And as long as you've produced an entertaining or useful app, an influx of new users should yield a healthy surge of 5 star ratings and reviews. Deliver results within a tight timeframe and you could see your app climb the ranks and potentially get featured by Apple.

Great. So you start testing campaigns in and outside of the App Store, you discover what works and your downloads start to increase. You've succeeded in grabbing people's attention and you've roped them into your app. Now what? Well, what do you want your users to do? What are your ultimate behavioral goals for them?

The approach you need to take inside your app is similar to outside:

Similar to Michael, the developers at Veam Studios used a scientific marketing approach to reach their app goals. Their main objective was to discover how to encourage more in-app purchases for their flagship app, Site Audit Pro. The experiment was decided upon: what would happen if the IAP price dropped by 50%?

The original in-app purchase screen with a price of 4.99, received a conversion rate of 16.7%. 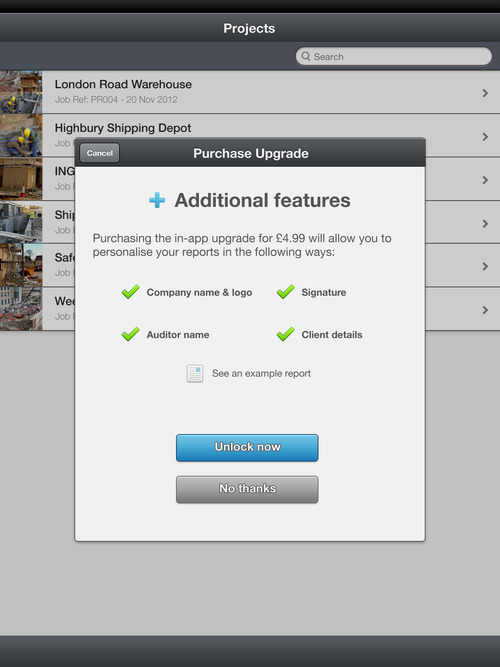 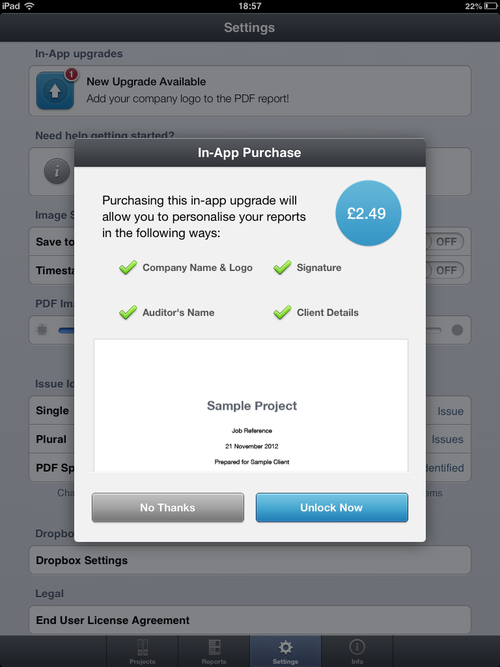 The results were staggering. Within a day Veam Studios saw a lift in conversions from 16.7% to 44% - over a 260% increase in sales. Dropping the IAP purchase price by 50% not only increased conversions, it also increased their revenues by 37%.

By improving the rate at which users attain desired behaviors, you'll be simultaneously improving the user experience in the process, in turn leading to higher ratings and happy reviews.

Whether your focus is to drive more users into your app via App Store optimization and web marketing or encourage certain in-app user behaviors, taking a scientific data-driven approach to your app's marketing can help you make smarter decisions that deliver superior results.

What are you currently basing your app marketing decisions on? Let us know in the comments below...