We recently launched Visibility Score and this post will tell you everything you need to know about it. Along with Difficulty Score, Traffic Score and Predictive Rank, it is one of our most important metrics. Find out how it works, get answers to commonly asked questions and learn how to use it effectively in your App Store Optimization.

The Basics Of Visibility Score

How It Is Calculated

Visibility Score is our proprietary measure of how visible an app is in keyword searches and chart rankings. There are several other inputs that are also included in the calculation, but search and chart rankings are the primary components.

Where To Find It

You can find the Visibility Score of any app in our Dashboard or on our App Profile Pages. It makes it really easy to see how visible an app is, at a glance.

There Is No Maximum

Our Difficulty and Traffic Scores are on a scale from 0-10 and people wonder why Visibility Score uses such a drastically different scale. There are a couple of different reasons for this.

First, there is a very wide range of visibility on the App Store. An app like Facebook has a Visibility Score that is orders of magnitude greater than even some of the most popular apps.

Therefore, giving Facebook a score of 10 would not be an accurate representation of how much more visible it is, compared apps at even the next lower tier of visibility.

We also need to allow for future expansion. So as apps like Facebook become even more visible, their Visibility Score will continue to climb.

You can think of it like a stock price. There could be an app that is like Birkshire Hathaway, Class A stock at $221,510 a share and there are also apps that are like Microsoft stock, at $45.

Second, we needed to provide enough granularity for app publishers to accurately measure the effect of their ASO changes. If we used a simple 0-10 scale, there can be a lot of improvement between 1.0 and 1.1, which would not be captured by such a limited scale. So by using really big numbers, we are able to more accurately measure changes in visibility.

Here is an example from Clash of Clans. This is the US Visibility Score. 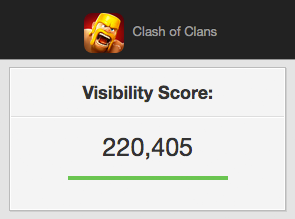 This is the score for the app in China. 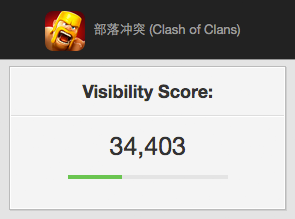 Visibility Score allows you to measure the progress of your App Store Optimization (ASO). It is very difficult to quantify App Store visibility on downloads alone because there are so many different reasons why your downloads could have increased. You may have purchased ads, your app may have been featured on a major blog or the increase could be result of a holiday or special event.

However, since Visibility Score is only focused on your app's rankings, it is a much more specific and meaningful metric for ASO. If you work at a company or have clients, you can use this score as a quantifiable way of measuring your progress.

In the case of apps that get a lot of downloads, ASO can take a little time to have a noticeable impact on downloads. So Visibility Score is a great way to show incremental progress until your improvements gain critical mass.

One common question we get is: What is a good Visibility Score?

A good score is relative, so you have to compare your app to similar apps in your niche. For example, when you examine a few third party email apps, here are their Visibility Scores.

So if you have an app that connects to email services like Gmail and Yahoo! Mail, in the US App Store, then 163,000 would be the score to shoot for. Of course, there are many more mail apps out there, but we only used these four as an example.

Visibility Score is a great way for you to measure your ASO progress and compare your app to your competition. Log into your Sensor Tower account now and find out your app's Visibility Score. If you are not a customer yet and want to try it out, we offer a 14-day free trial.

Where you surprised at your app's Visibility Score? Let us know in the comments below...