Although released just a week ago, Apple's iOS 14 has already begun to transform how consumers interact with their iPhone and iPad home screens. According to Sensor Tower Store Intelligence estimates, installs of the top 20 home screen customization apps launched to date have collectively reached at least 13.7 million installs globally.

For this analysis, we studied the top 20 apps that are primarily focused on home screen customization through widgets, according to their descriptions. First-time installs of these apps peaked on September 21, reaching more than 3 million installs from across the App Store globally. All the apps in this cohort launched on or after September 16, 2020.

Top of the Crop 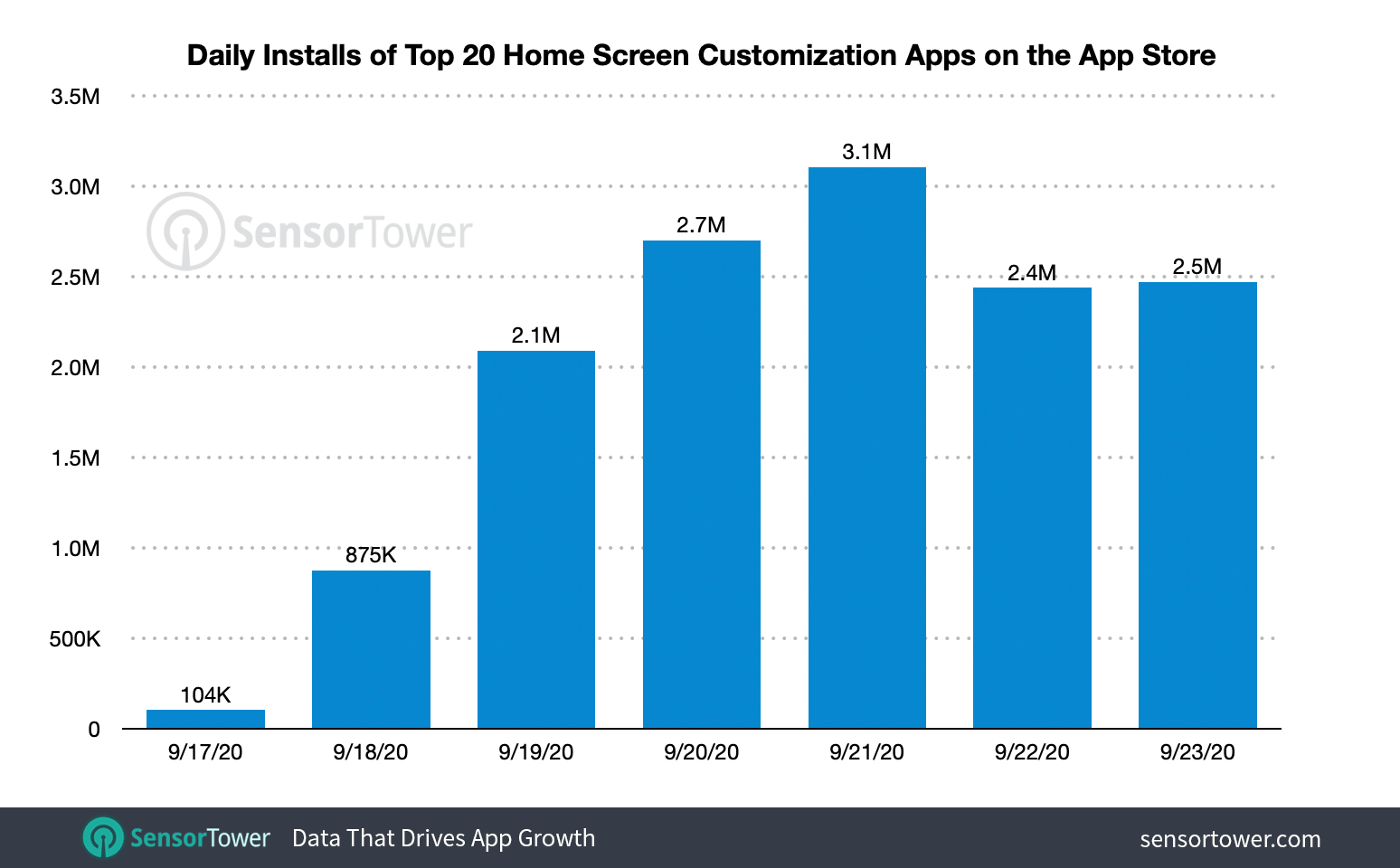 According to our data, these three apps alone generated more than 12.6 million installs globally in the seven days following iOS 14's launch, a figure that represents about 92 percent of the 13.7 million total for the apps we studied. The single largest portion of these installs, 26 percent, came from U.S. App Store users.

Utilities and Productivity were the most common categories among the 20 apps. Together, the cohort collectively generated more than $1 million in consumer spending between September 17 and 23. Widgetsmith saw the most spending with more than $840,000, followed by Color Widgets with more than $155,000. 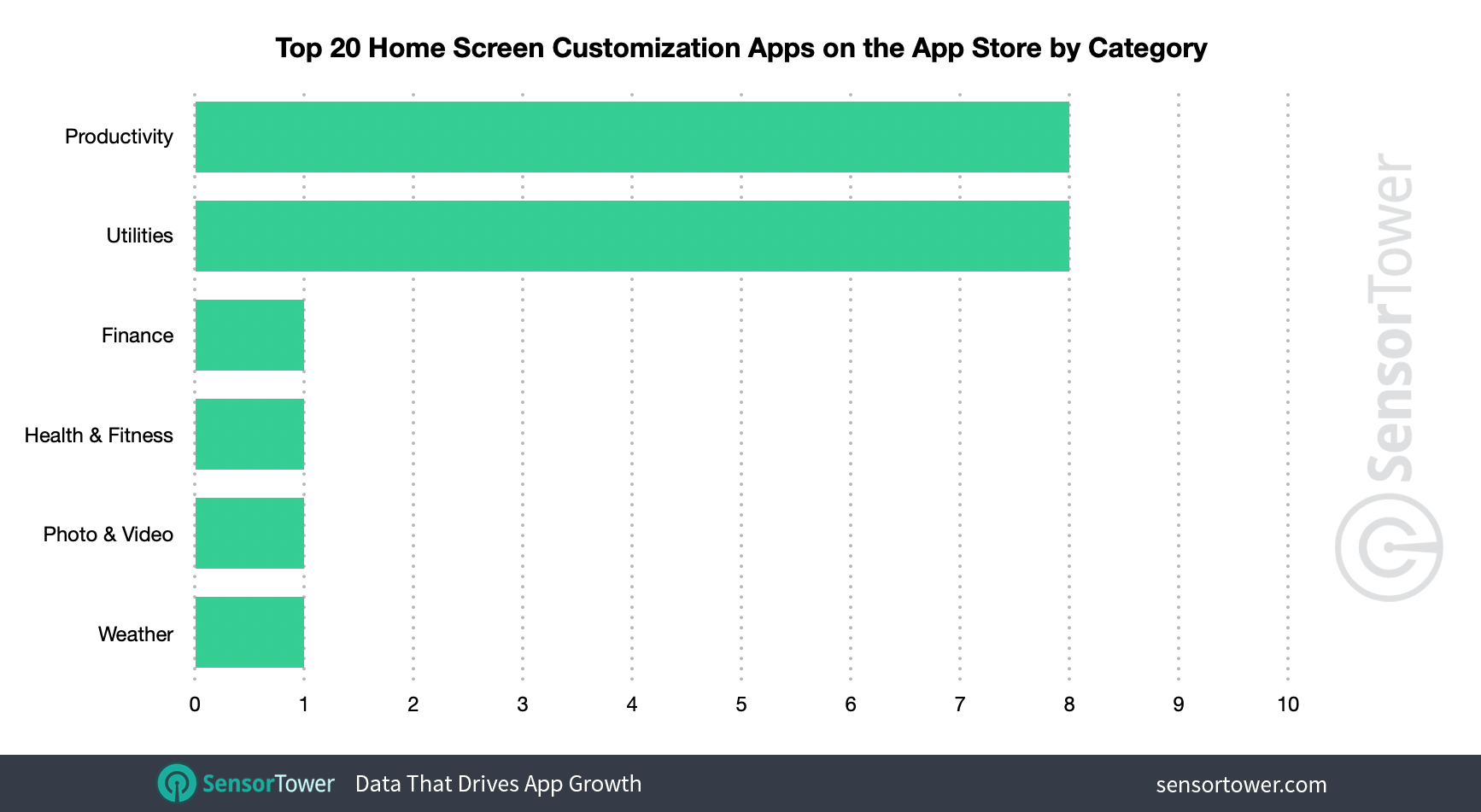 Apps focusing on widgets and widget creation weren't the only ones that saw a surge in installs in the period we studied. Others such as Motivation and TuneTrack, which provide widget functionality on the home screen, also saw an uptick in downloads from first-time users across the App Store globally.

Developers swiftly pushed out updates on September 16, enabling users quick access to their apps through widgets. This rapid rollout resulted in more than 1 million installs for Motivation and in excess of 890,000 for TuneTrack globally in the period between September 17 and 23. These apps witnessed significant week-over-week growth. TuneTrack saw its installs increase approximately 297 times when compared to the September 10 to 16 period and Motivation grew 1,049 percent W/W.

A Possible Boon for Indies

A handful of big brands have rolled out widget functionality as well, including Expedia, The Weather Channel, and 3M with its Post-It app. However, the majority of early widget apps have emerged from independent or smaller developers. Photo Widget's publisher, Hyoungbin Kook, has three apps under their belt and more than 2.6 million installs to date, most of which come from Photo Widget. Widgetsmith is from a solo developer that has released several dozen apps including Pedometer++ and Audiobooks, generating more than 26 million installs on iOS since January 2012.

iOS 14 has only been available for a week, and higher profile developers will undoubtedly release their own apps with widget functionality, or add it to existing apps. That said, developers will continue to find new ways to customize the home screen in ways that deliver real value for consumers, and some of the new hits may come from smaller studios with fresh ideas. Larger publishers and brands will likely be watching the early success stories for cues as to how they should leverage this popular new functionality to attract, engage, and retain users as iOS 14 gains adoption.