Driven by a surge in use and adoption of the device during the COVID-19 pandemic, quarterly first-time downloads of apps for Apple's iPad surpassed 1.1 billion worldwide in Q1 2020, marking the first year-over-year growth in this metric since the fourth quarter of 2013 and a 40 percent increase from Q1 2019. At the same time, Sensor Tower Store Intelligence data reveals that quarterly global consumer spending in iPad apps saw its largest Y/Y increase since Q4 2014 at 16 percent, while crossing the $2 billion threshold for the first quarter ever.

As can be seen in the chart below, last quarter's total of new app installs on iPad was its largest since Q3 2016, when consumers worldwide downloaded an estimated 1.16 billion iPad apps for the first time. One year ago in Q1 2019, first-time iPad app downloads were down 19 percent Y/Y. 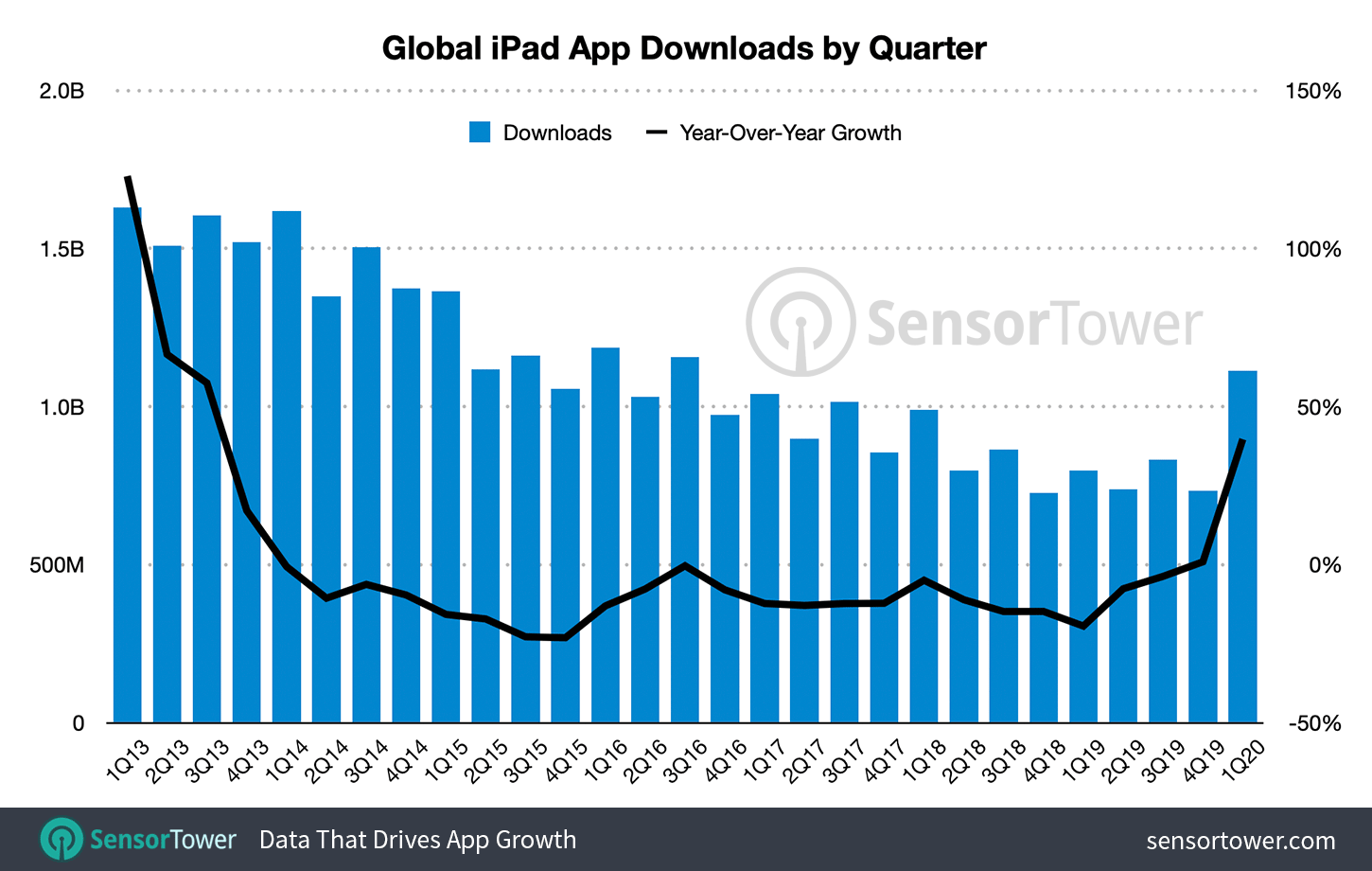 More significant than the 40 percent Y/Y growth in new iPad app installs in Q1 was the 52 percent quarter-over-quarter increase from Q4 2019, when the total number of downloads reached approximately 735 million globally—379 million fewer than last quarter.

Monthly installs of iPad apps also reached their highest level since February 2015 last month, when they climbed to nearly 438 million, a Y/Y increase of almost 72 percent and month-over-month growth of about 21 percent. China was responsible for the largest number of March's new iPad app installs at 151 million, its third best month and largest March ever. The United States saw monthly iPad app downloads surpass 100 million for the first time since January 2016 last month, a figure 47 percent higher than March 2019.

Outside of Games and Entertainment, global iPad installs last quarter were led by Education apps, which reached a record 105 million worldwide. This was not only the best quarter on record for Education apps on iPad, but the first where they exceeded 100 million installs. The previous best quarter for Education category apps on the platform was Q1 2013 when they reached 91 million. Last quarter's total of 105 million was 78 percent higher than Q1 2019's 59 million and 114 percent higher than Q4 2019's 49 million, illustrating the enormous impact of COVID-19 on at-home schooling.

Games, the largest source of new iPad downloads in Q1, had their best quarter on the tablet since Q1 2016 with close to 603 million installs globally. This was up 52 percent Q/Q from 398 million in Q4 2019. Entertainment apps, meanwhile, closed in on 88 million new installs worldwide last quarter, up 33 percent Q/Q from Q4 2019 to their highest level since Q2 2018.

While iPad app installs reached levels not seeing in several years due to the COVID-19 pandemic, consumer spending in apps on Apple's tablet platform last quarter crossed a major milestone. Consumers spent an estimated $2.1 billion in iPad apps globally during Q1 2020, six years after quarterly spending crossed the $1 billion mark in Q1 2014. About 76 percent of this, or approximately $1.6 billion, came from games. 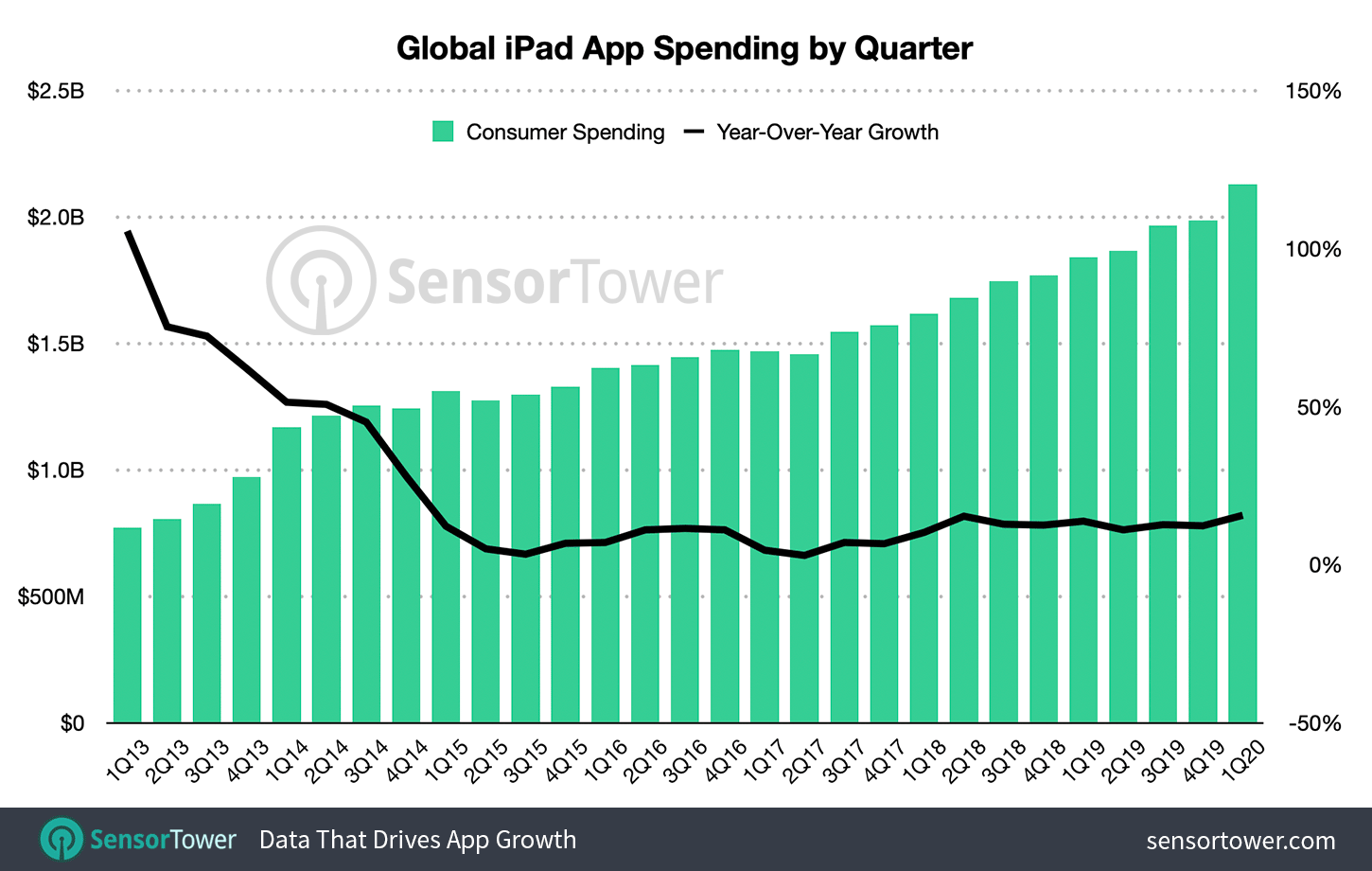 U.S. consumers contributed the majority of last quarter's record total, spending approximately $893 million in iPad apps. This was 15 percent more than U.S. App Store users spent in iPad apps during Q1 2019. About $335 million of last quarter's iPad app spending came from users in China, the second largest contribution to the platform's quarterly revenue in Q1 and a figure 43 percent greater than the $235 million they spent in Q1 2019.

As we witnessed with downloads, Education saw the sharpest Q/Q increase among iPad categories in terms of spending worldwide, increasing 35 percent over Q4 2019 to about $92 million.

Comparatively, Y/Y growth in consumer adoption of iPad apps during Q1 dramatically outpaced what was seen on iPhone, although Apple's handset platform did post its biggest quarterly increase since Q2 2016. First-time iPhone app installs grew 24 percent Y/Y last quarter, compared to iPad's 40 percent growth, likely owing to both the tablet platform's consistent decrease in installs over the years and its suitability as a desktop/laptop stand-in at home, especially for younger students. Also, while iPad saw best-in-years spending growth last quarter, iPhone's was actually slightly less than its Y/Y increase for Q1 2019.

The global COVID-19 pandemic has clearly elevated the popularity of Apple's tablet as a platform and made it an even more attractive target for app publishers as consumers in most markets remain in isolation for the foreseeable future. Sensor Tower forecasts that app adoption will see a lasting lift from COVID-19 beyond just Apple's platforms, and will continue to track its impact on the wider app economy over the coming weeks and months.