On the (designer) heels of its announcement that Kim Kardashian: Hollywood had generated more than $100 million since launching in summer 2014, Glu Mobile was back at the top of the App Store charts last week thanks to Kim's sisters, Kendall and Kylie Jenner.

Their new mobile game, Kendall and Kylie, has already become one of the biggest App Store launches in recent memory and, according to Sensor Tower data, eclipsed their sister's first-week performance in more ways than one. In this post, we'll compare the two launches by the numbers, and look at how Glu's previous celebrity tie-in, Katy Perry Pop, stacked up.

To compare the launch of Kendall and Kylie to Kim Kardashian: Hollywood, we utilized download and revenue estimates provided by our Store Intelligence platform for the first five days of both apps' availability in the United States: February 16 through 20, 2016 and June 24 through 28, 2014, respectively. The estimates were for combined iPhone and iPad downloads and revenue.

A Stronger Start Than Their Sibling

In the chart below, you can see how this looked on a daily basis. Kendall and Kylie downloads remained more or less level from days two to four, before climbing into the weekend, while Kim Kardashian: Hollywood saw a decrease in downloads heading into its second week of availability. 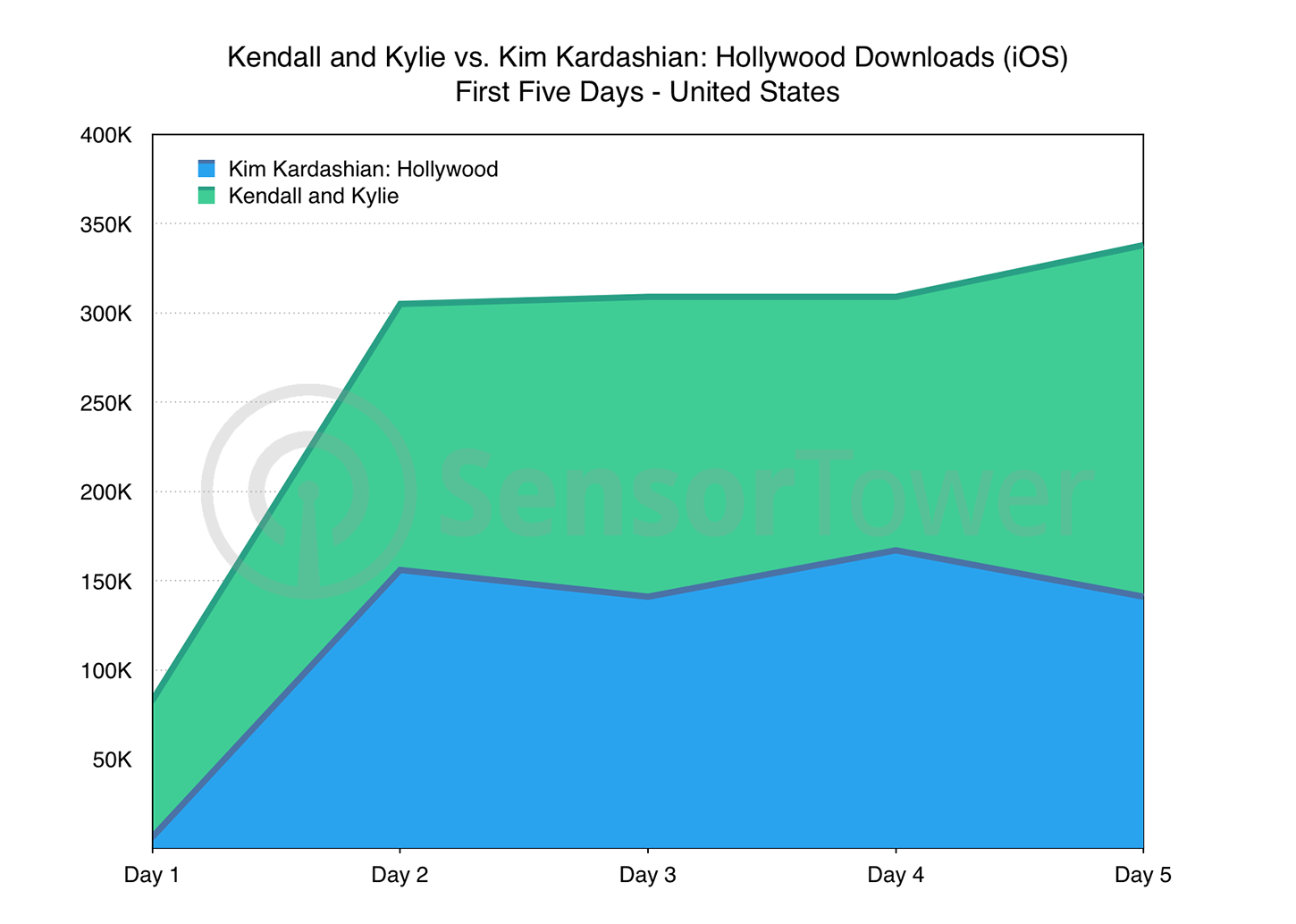 Faster to Number One, But There More Briefly

Kendall and Kylie hit No. 1 on the App Store's all categories chart for free apps in the U.S. in its second day of availability, as seen in the chart below. It remained in the top spot for four days before dropping to No. 2 by the end of February 22. By comparison, Kim Kardashian: Hollywood didn't chart at No. 1 until 24 days after its launch, and remained there for nine days. 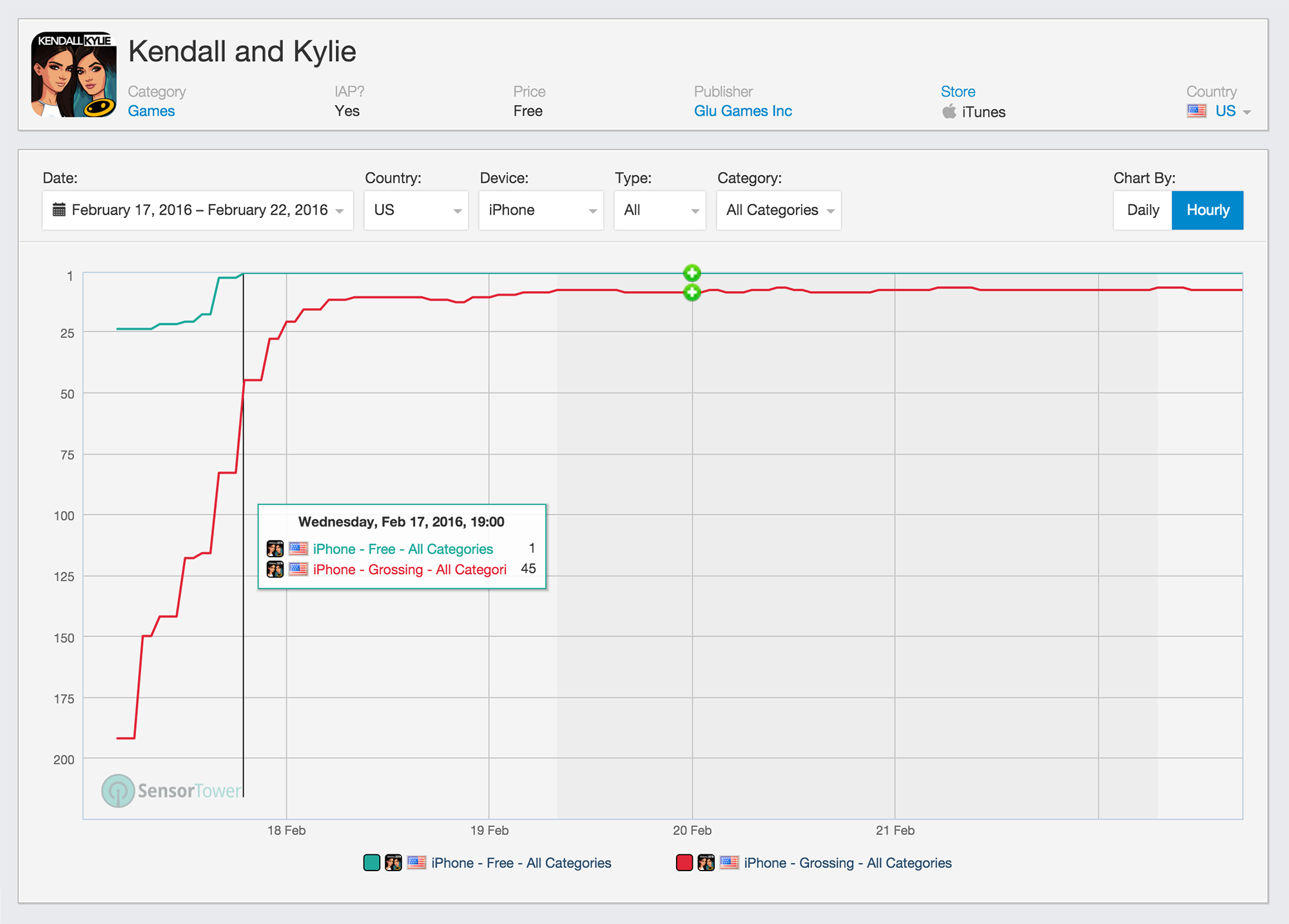 In terms of revenue, Kendall and Kylie has ranked as high as No. 7 on the iPhone top-grossing chart for all categories in the U.S. and our estimates show that it brought in more than $680,000 through in-app purchases during its first five days. This is compared to the estimated $222,000 made from IAPs by Kim Kardashian: Hollywood in the U.S. within five days of its launch.

To date, Kim Kardashian: Hollywood has received more than 95,000 reviews worldwide, 94 percent of which are positive. Looking at the Review Analysis of Kendall and Kylie using our App Intelligence platform, it would seem that Glu has managed to recapture much of what players liked so much in its earlier title.

Kendall and Kylie has 3,356 reviews as of this post, 92 percent of which are positive, with users mentioning an improved overall gameplay experience and better graphics than the Kim Kardashian app as two of their favorite aspects of this follow-up.

Back on the Red Carpet

We've talked about how Kendall and Kylie stacks up to Kim Kardashian: Hollywood in terms of downloads, revenue, and user sentiment—but it's a marked improvement over what we saw with Glu's second celebrity game, Katy Perry Pop.

Launched in the United States on December 15, 2015, the title only made it as high as No. 96 on the country's all categories ranking for free iPhone apps, receiving an estimated 107,000 downloads during its first five days (about 8 percent of what Kendall and Kylie received). In terms of user sentiment, it currently stands at 55 percent positive, compared to the greater than 90 percent positivity for the Kardashian and Jenner titles, with players citing a lack of bug fixes since launch as a major pain point.

Given everything we've seen so far, it appears that Glu has managed to shake its sophomore slump and put Kendall and Kylie on a path to success. It will be interesting to see how the publisher applies its learnings from the launches we looked at to its next celebrity game, Britney Spears: American Dream, which recently soft-launched in New Zealand and the Netherlands, along with other upcoming titles featuring the likes of Taylor Swift and Nicki Minaj.