This analysis is powered by Sensor Tower’s Game Intelligence features, which can delve into titles by setting, art style, camera POV, and theme. These tools provide publishers with another powerful data set to utilize in their analyses that enable a deeper look into the market and their competitors. They work in tandem with Sensor Tower’s Game Taxonomy, which segments games into relevant genres and subgenres to support publishers in efficiently identifying key trends.

The Animal – Insect theme saw the fastest revenue growth of all themes, with player spending seeing an approximately 10 times increase year-over-year in the U.S. during 2021 to $26.5 million. Revenue for the theme was largely led by The Ants: Underground Kingdom from ChengDu Starunion Interactive, which accounted for 89.6 percent of player spending, followed by Bee Brilliant from Tactile Games. The second fastest growing theme by revenue during this period was Fashion / Aesthetics / Hair, which saw a 3.7 times increase in player spending Y/Y to more than $307 million. Ranking No. 3 was Sports - Shooting / Hunting, which saw an approximately 3.3 times revenue increase Y/Y to $18.5 million. 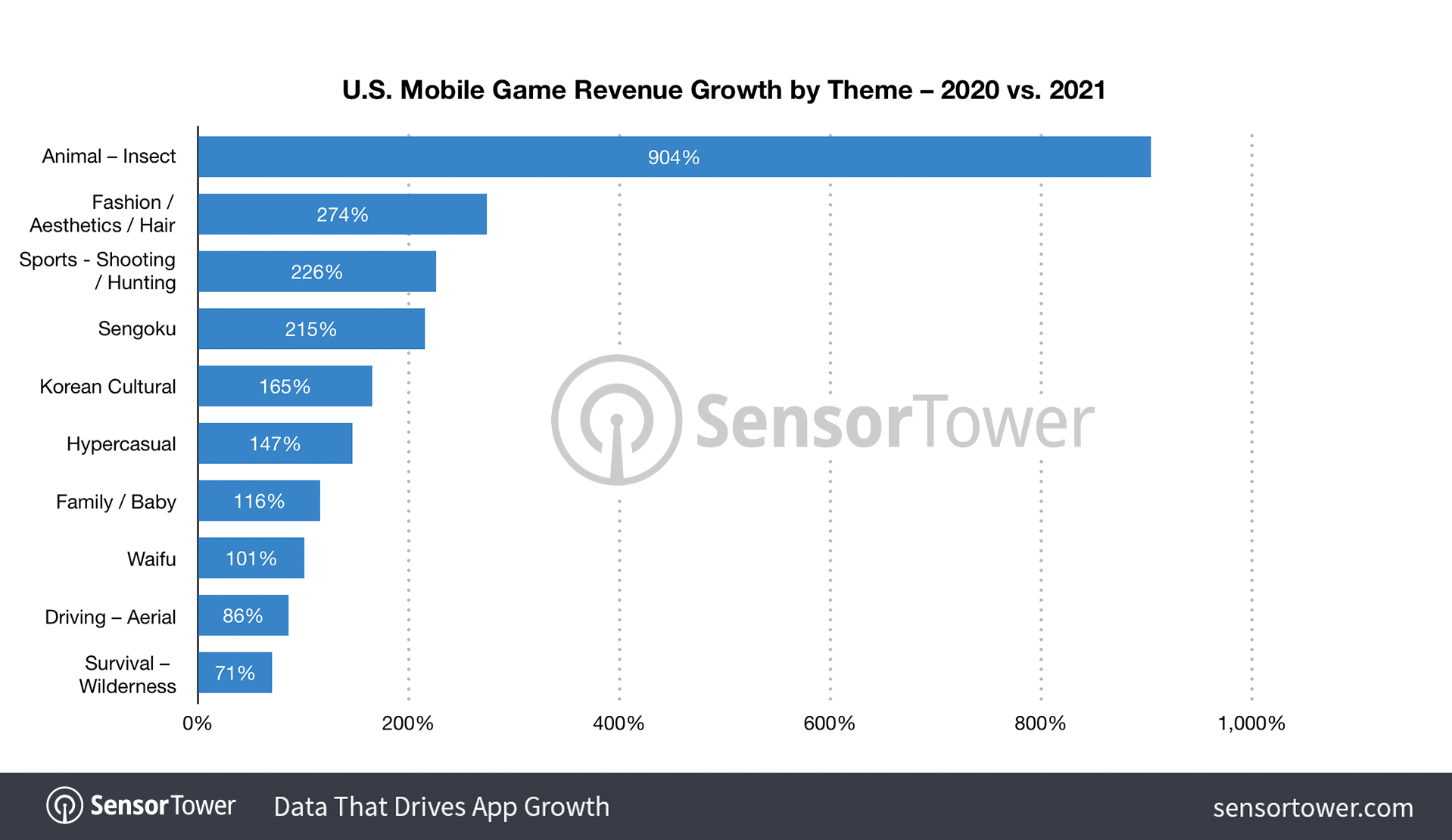 The No. 1 theme by player spending during 2021 was Money / Treasure, which includes titles such as Coin Master from Moon Active and Bingo Blitz from Playtika, generating $4.4 billion. It was followed by Empire Building at No. 2 and Tabletop at No. 3.

Historical was the fastest-growing game setting in 2021, with revenue increasing by 32 percent year-over-year to $1.4 billion, led by titles such as Rise of Kingdoms from Lilith Games and Royal Match from Dream Games. The No. 2 setting for revenue growth was High Fantasy, which saw player spending increase by 16.6 percent Y/Y to $5.4 billion, while Sci-Fi ranked No. 3 with revenue up by 6.6 percent Y/Y to $2.4 billion. 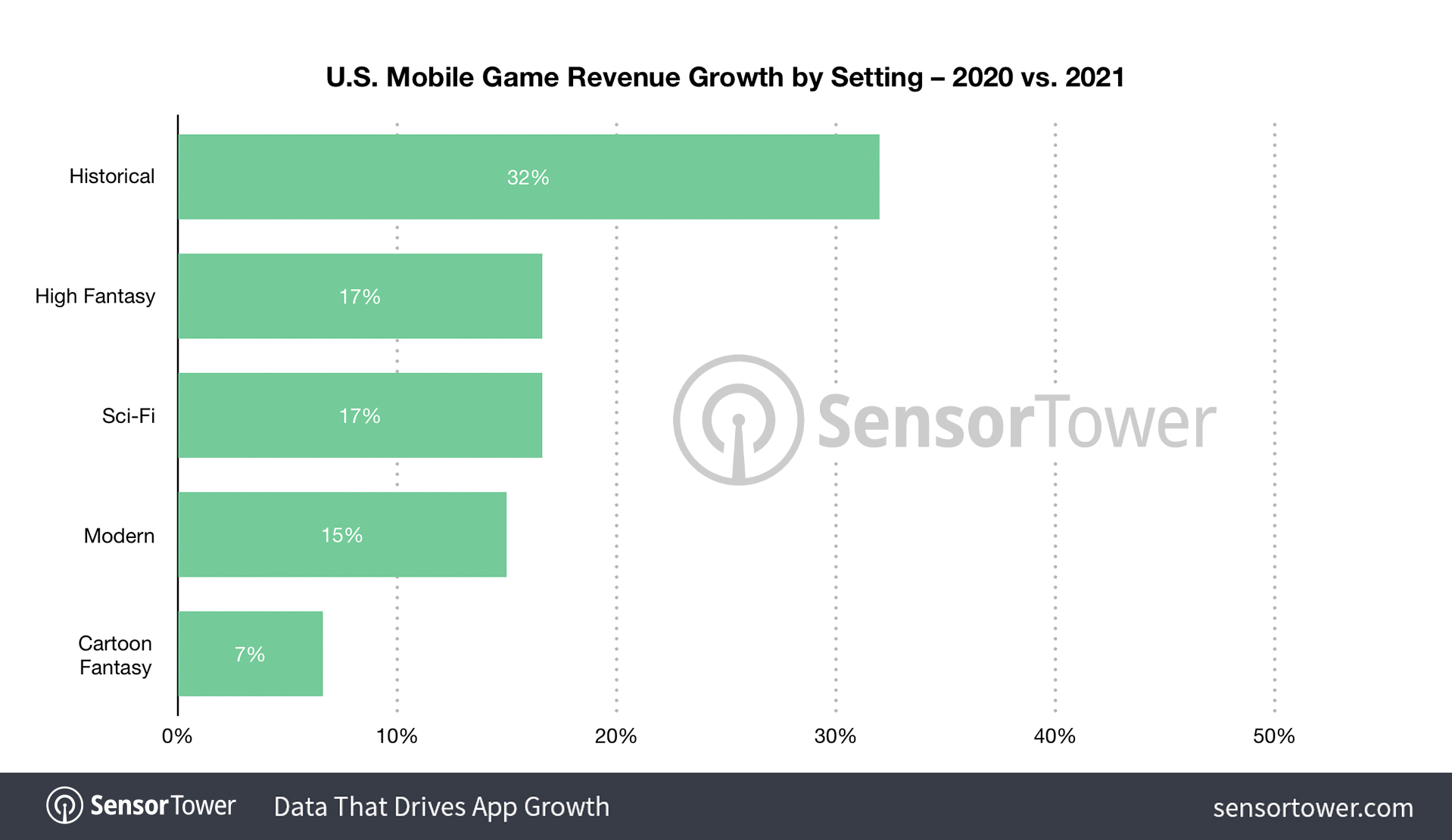 The No. 1 setting by player spending was Modern, which includes titles such as Garena Free Fire from Garena and Homescapes from Playrix, racking up $6.3 billion in 2021. High Fantasy, meanwhile, ranked No. 2 for revenue, while Cartoon Fantasy ranked No. 3.

Neon, which includes titles such as Beatstar from Space Ape and Tiles Hop from Amanotes, saw the fastest growth in player spending for art style, which saw a 2.1 times increase Y/Y to $20 million. It should be noted, however, that Neon generated the least amount of revenue of any art style. It was followed by Hypercasual at No. 2, which saw revenue increase by 70.4 percent Y/Y to $46.5 million, and 3D Anime at No. 3, which saw player spending rise by 58 percent Y/Y to $906 million. 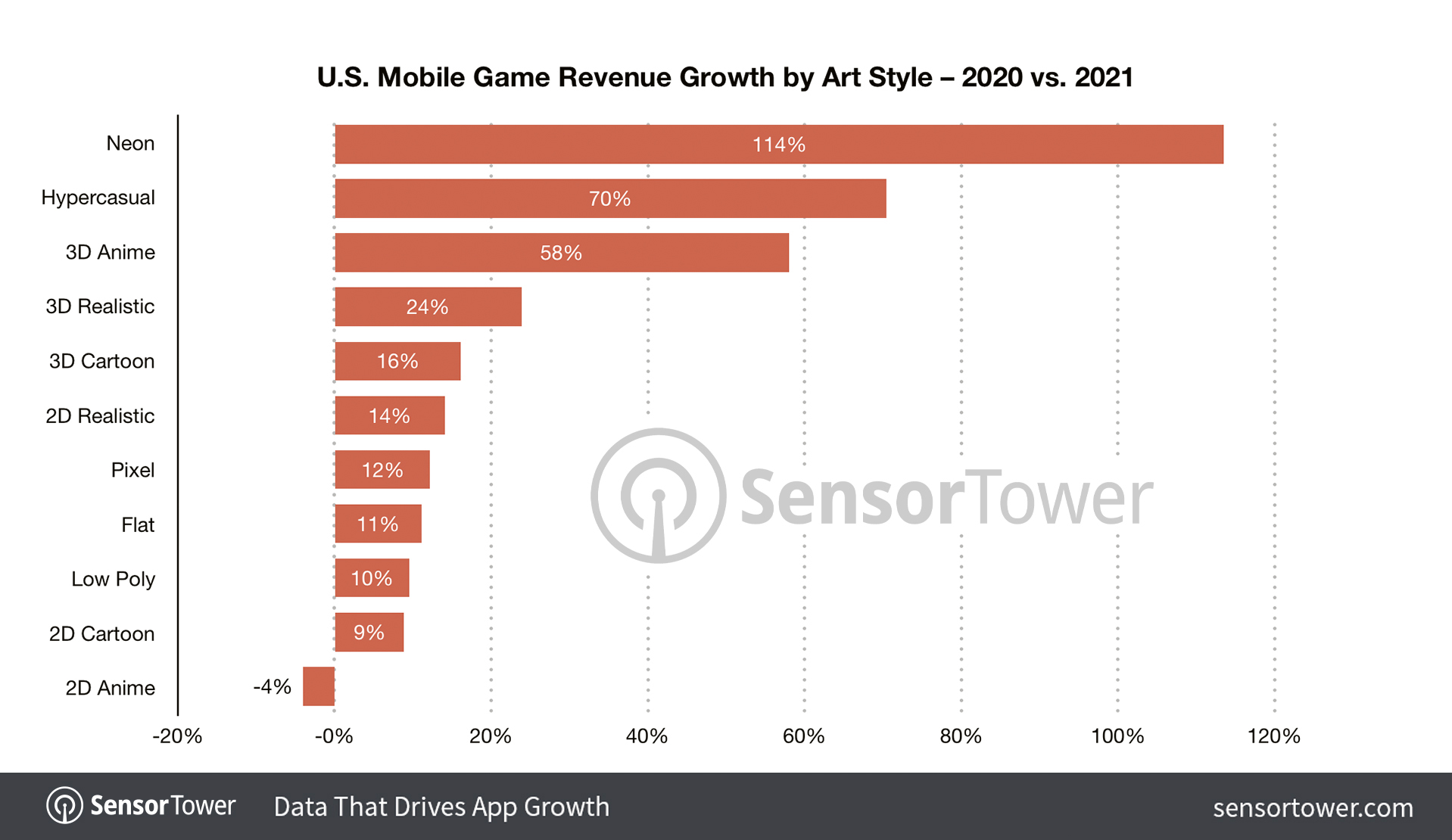 The top grossing art style in 2021 was 2D Cartoon, which includes titles such as Candy Crush Saga from King and Coin Master, generating $12 billion in total. It was followed by 2D Realistic at No. 2 and 3D Realistic at No. 3.

Third Person, which includes titles such as Garena Free Fire and Genshin Impact from miHoYo, ranked as the No. 1 fastest rising camera POV by player spending in 2021, with revenue increasing by 23.8 percent Y/Y to $2.1 billion. Top-Down was the second fastest growing camera POV, with revenue rising by approximately 19 percent Y/Y to $3.8 billion, while Side rose by 13.2 percent to $7.2 billion. 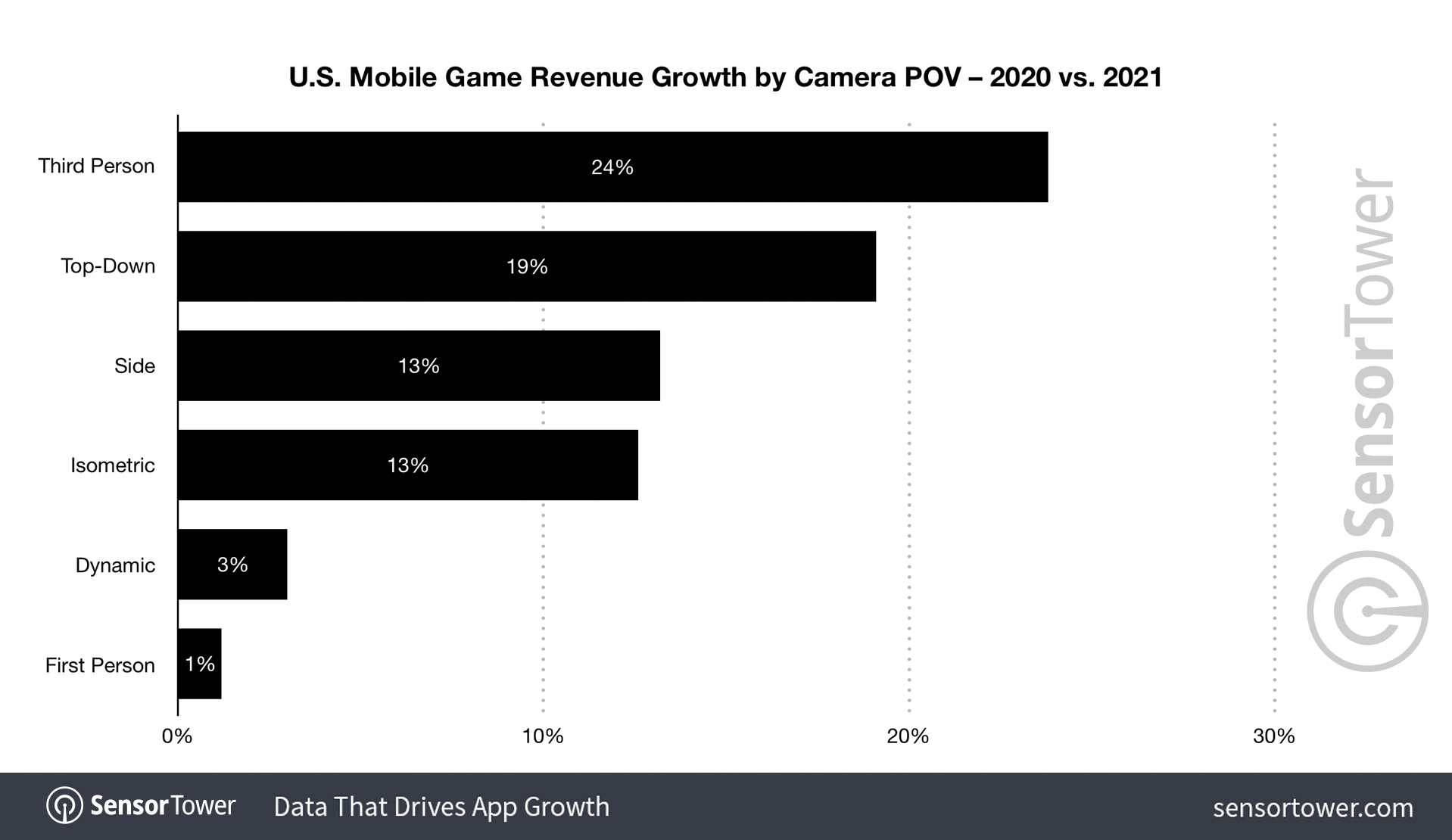 Isometric, which includes titles such as Coin Master and Homescapes, ranked No. 1 for revenue, followed by Side at No. 2 and Top-Down at No. 3.

Earlier this year, Sensor Tower provided insights into how each genre was performing in the U.S. market during 2021. By utilizing Game Intelligence, we can analyze the mobile games market at a deeper level, and understand not just which genres are on the rise or in decline–and where opportunities may lie for newcomers–but which themes and settings are the most popular, as a powerful means to help ensure the greatest chance of success.