Utilizing Sensor Tower’s Game Taxonomy and Game Intelligence features, which segments games into relevant genres and subgenres to support publishers in efficiently identifying key trends, we analyzed each of the 14 main game genres in 2021 compared to 2020, looking at U.S. revenue and downloads in each category across the App Store and Google Play. This gives us a clearer picture of which genres in the market are still on the rise following the outsized growth seen in 2020 during the height of the first wave of the COVID-19 pandemic and lockdowns.

Action was the fastest rising genre, with player spending up 68.9 percent year-over-year to $966.8 million. The largest Action subgenre for player spending was Open World Adventure, which generated more than $418.3 million, a 3.5 times increase Y/Y. This was almost entirely driven by the No. 1 revenue generating Action title, Genshin Impact from miHoYo, which accumulated $406.3 million in the U.S. during 2021.

The No. 2 Action title by player spending was Marvel Contest of Champions from Kabam, while Dragon Ball Legends from Bandai Namco ranked No. 3. 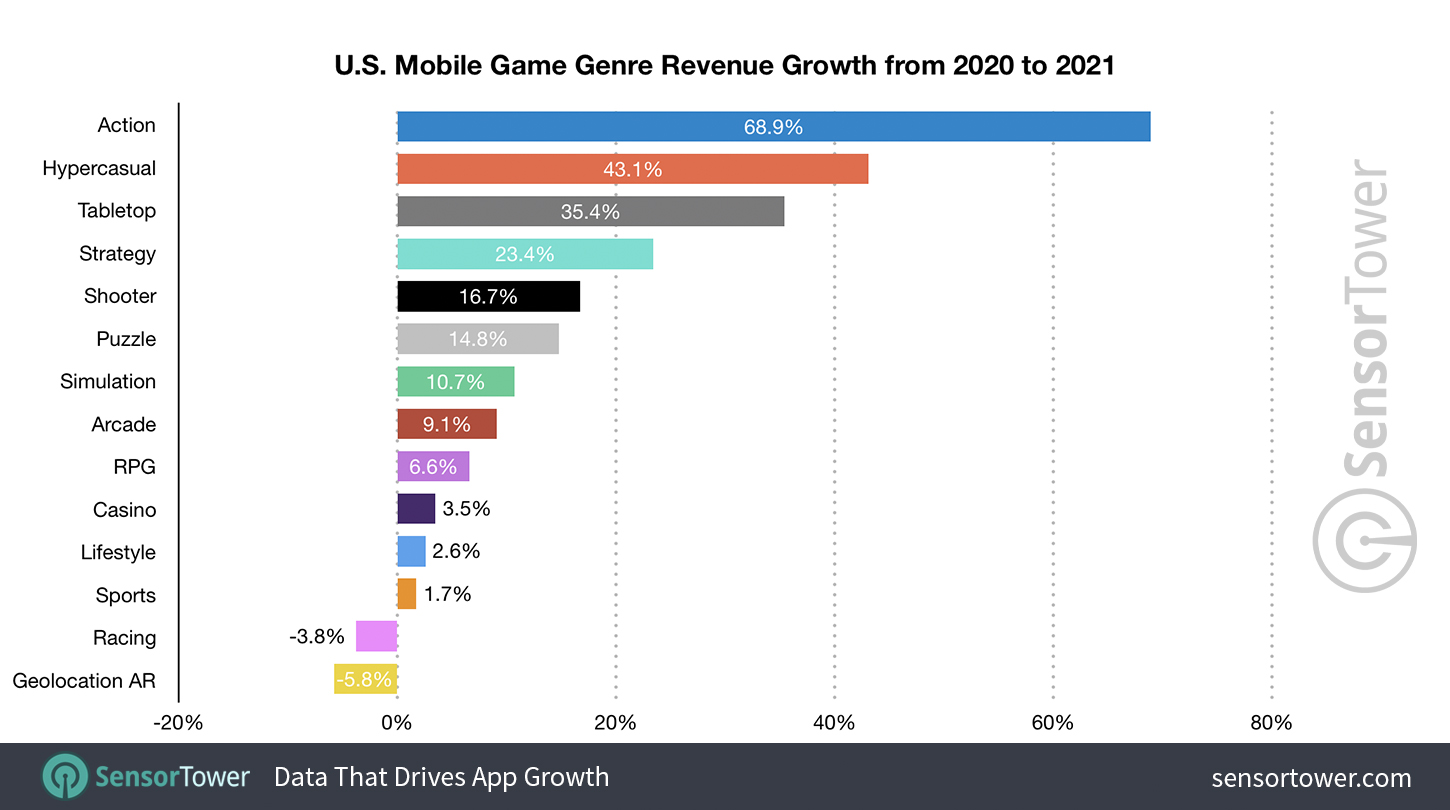 The second fastest-growing genre by revenue in 2021 was Hypercasual, which increased by approximately 43 percent Y/Y to more than $111 million. Tabletop, meanwhile, ranked No. 3 for growth, with player spending rising by 35.4 percent Y/Y to $772.5 million.

Puzzle was the largest category by spending in 2021, generating $5.1 billion. It was followed by Casino, which accumulated $4.8 billion, and Strategy, which picked up $4.3 billion.

During 2021, every game genre saw a decline in downloads year-over-year, due in large part to the outsized growth from the pandemic’s first wave in 2020. The Sports genre saw the smallest decrease, with installs down 2.5 percent Y/Y in 2021 to 141.2 million. The top Sports subgenre for downloads was Realistic Sports, which declined by about 8 percent Y/Y to approximately 79.5 million installs. The No. 1 Sports game for downloads was 8 Ball Pool from Miniclip, which accumulated 10.5 million installs, followed by Retro Bowl from New Star Games at No. 2 and Madden NFL 22 from EA at No. 3. 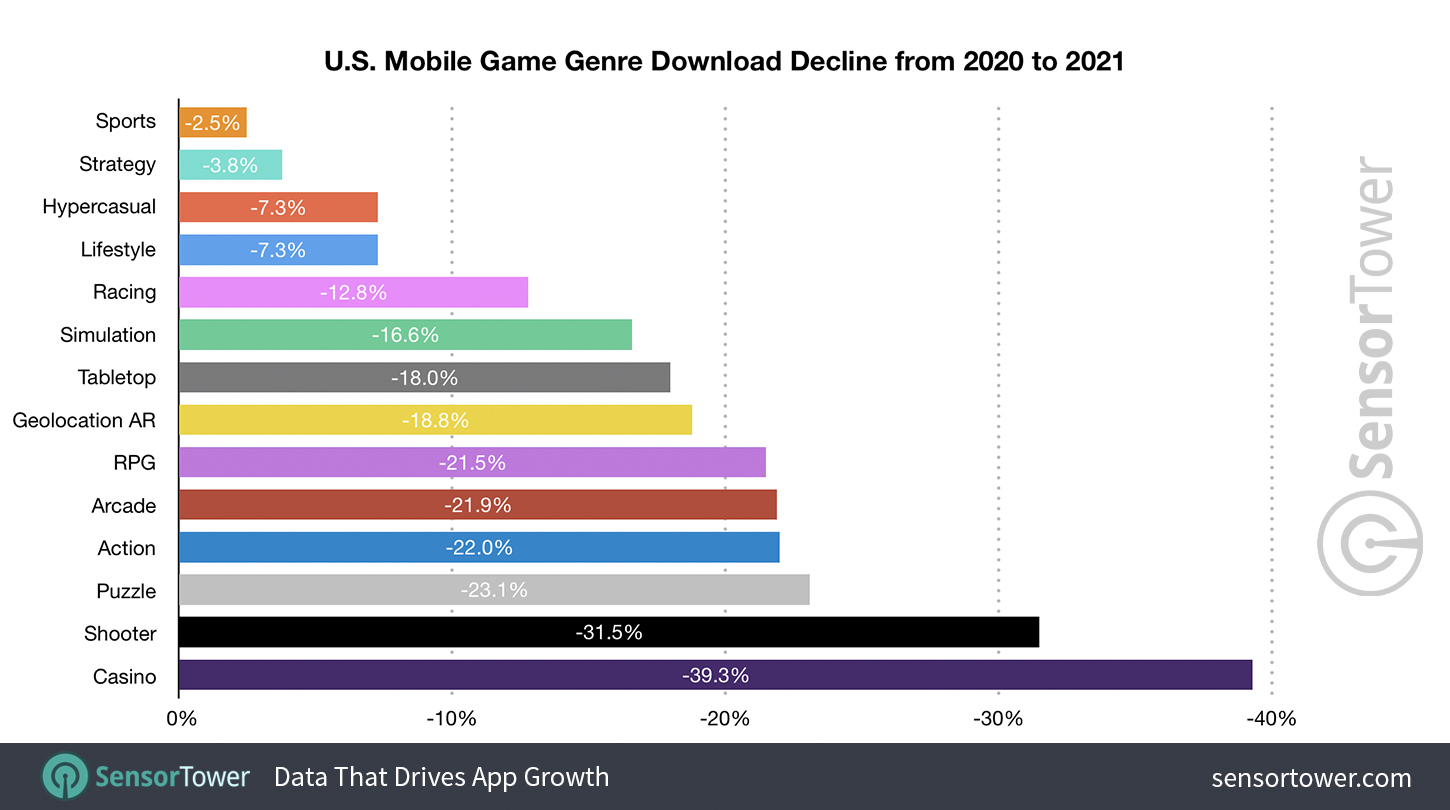 Strategy, meanwhile, saw the second smallest decrease in downloads year-over-year, dropping by 3.8 percent Y/Y to 135.8 million, while Hypercasual saw a decline of 7.3 percent Y/Y to 1.5 billion.

Hypercasual ranked No. 1 with the most downloads during 2021, while Puzzle ranked No. 2 with 552 million installs and Arcade ranked No. 3 with 438.5 million downloads.

As with our previous H1 analysis, the full year of 2021 saw similar overall market trends in the U.S.: player spending was up in almost every genre, while downloads were down across the board. Overall, mobile game installs in the U.S. were down 9.5 percent to 4.9 billion Y/Y in 2021, unable to catch up with 2020’s outsized gains, while player spending rose 13.7 percent Y/Y to $25.4 billion. The latter shows more players are spending more in mobile games than before the pandemic, and that they’ve stayed engaged. While the pandemic rages on, social restrictions have generally not been as strict as during the first wave, but consumers are still finding time to play games on mobile.