If you’ve ever had to use a friend’s phone or tablet, you know it’s possible to get a window into someone else’s personality based solely on the apps they’ve installed. Now imagine you could see what an entire country’s worth of people had downloaded over an entire year. What sort of insight would that give you? We decided to tackle that question using our App Store data—and the answers we found just might surprise you.

After mulling over the possibilities of what we could derive from available data (namely download estimates by category), we chose to see if we could determine how fun or serious a country is based on its iOS app download preferences. After all, this really is the most straightforward way to categorize all the world's available apps: they're mostly either fun or serious (some types are on the fence a bit, which we'll explain shortly).

We know you're dying to see the results, so let's get to those before explaining how we did this. These are the most fun countries according to one full year of app downloads: 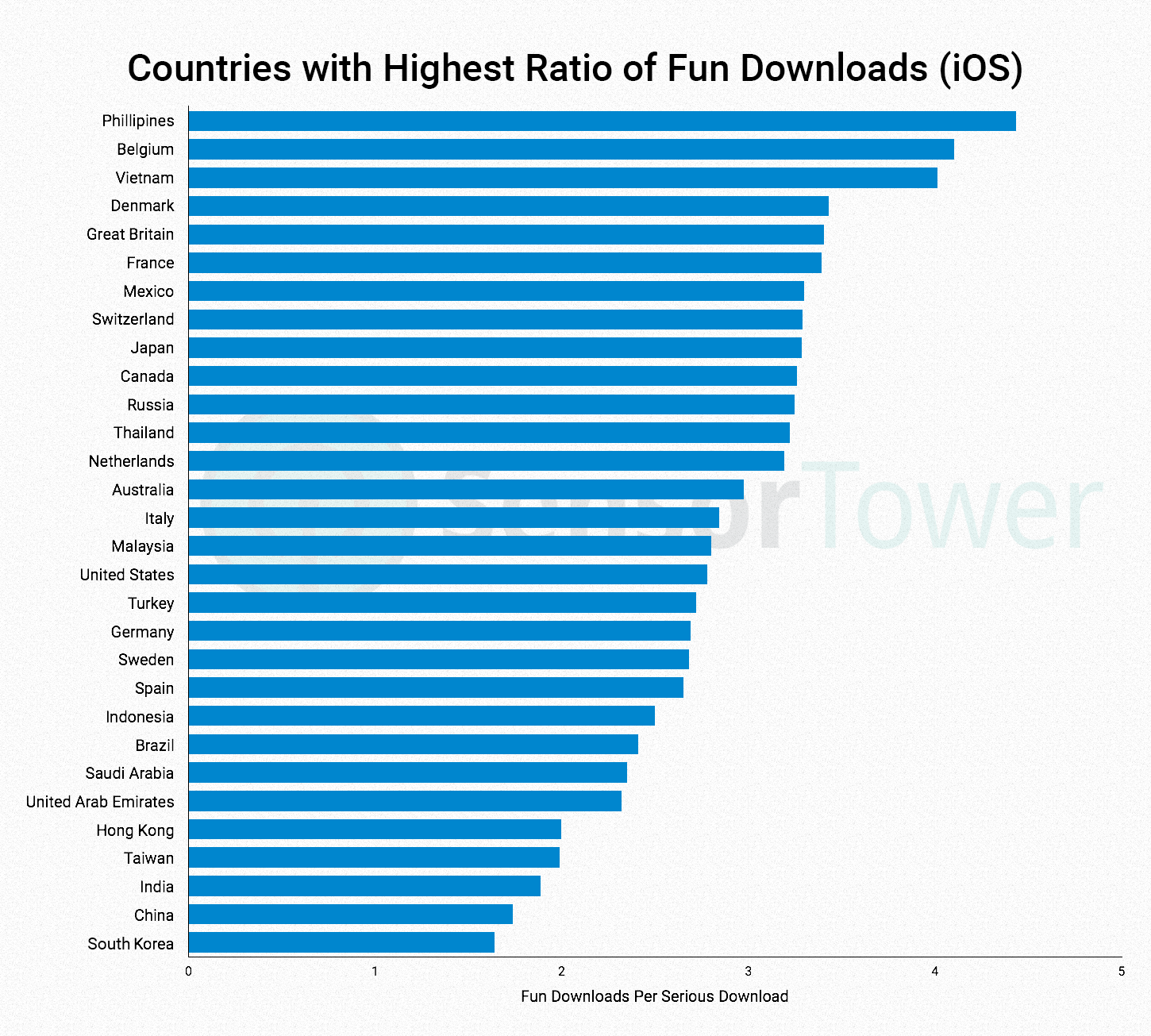 You may be looking at the chart and scratching your head a bit based on your own notions of which countries should be "fun" or "serious", but our analysis of the data actually lines up pretty nicely with a study performed earlier this year by the Organisation for Economic Co-operation and Development (OECD) on hours worked around the globe.

In the study, countries that had a tendency towards leisure apps in our analysis such as Belgium and Denmark also had some of the shortest work weeks. On the other hand, South Korea, which in our findings tended heavily towards serious work-related app downloads, worked nearly the longest hours overall.

How We Created This Map and Ranking

We looked at one year of download estimates from the Apple App Store (so apps for iPhone and iPad) from November 1, 2014 through November 1, 2015 using Sensor Tower's Store Intelligence platform. We included data from only the top 30 countries by download volume, the full list of which you can see in the chart above.

Since the download volume for fun apps is significantly larger than serious apps in general (mostly due to the popularity of the games category), we used a ratio to compare the number of fun downloads per serious download. The higher the ratio of fun apps to serious apps, the more fun the country, and vice versa.

The Most Fun and Most Serious

The results were ranked and the Philippines had the most fun apps (such as Q3 2015's top game there, Clash of Clans) downloaded in relation to serious apps (the top business app there during the same period was Acrobat Reader), at 4.43 to 1.

At the other end of the spectrum, South Korea downloaded only 1.64 fun apps (the gaming title 프렌즈팝 for Kakao was tops there last quarter) for every one serious app (such as Q3 2015's most downloaded business app, WeMakePrice).

Of course, these findings are just for fun—we're not implying that any of the countries we looked at aren't joyful places or can't get work done—and we hope our own bit of data levity has made you think about the world (and the world of App Store intelligence) a little differently.