In our prior “Round 1” blog entry on Apple's impending move into streaming music, back in June, we used a range of features from Sensor Tower’s Mobile Market Intelligence solutions to size up the pre-launch landscape of the top tier of mobile app players in the streaming music category in Apple’s App Store.

Now that it's been a few months, it seemed like a good time to look back at the mayhem on iOS. Some of the early results are actually quite surprising.

From Round 1, we divided the contenders into two groups, and we used Sensor Tower’s Sensor Tower's Store Intelligence Platform, to get a comprehensive look at download momentum for each of these apps. 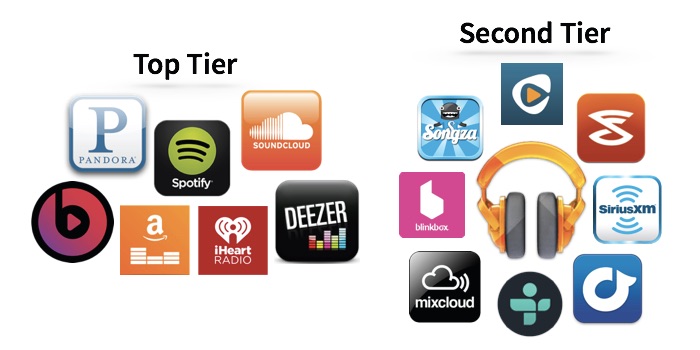 For those of you with access to Sensor Tower's Store Intelligence Platform, here are two URLs that capture this top- and second-tier collection of apps:

Note: We continue to use download estimates as a primary performance metric. Though revenue estimates are also available from Store Intelligence – they only cover revenue collected through App Store specifically, and since some streaming music apps monetize outside of the App Store, we wanted a clear apples-apples metric across all apps.

Looking at our top tier players in the US-only since June 30, some of the results are quite intriguing: 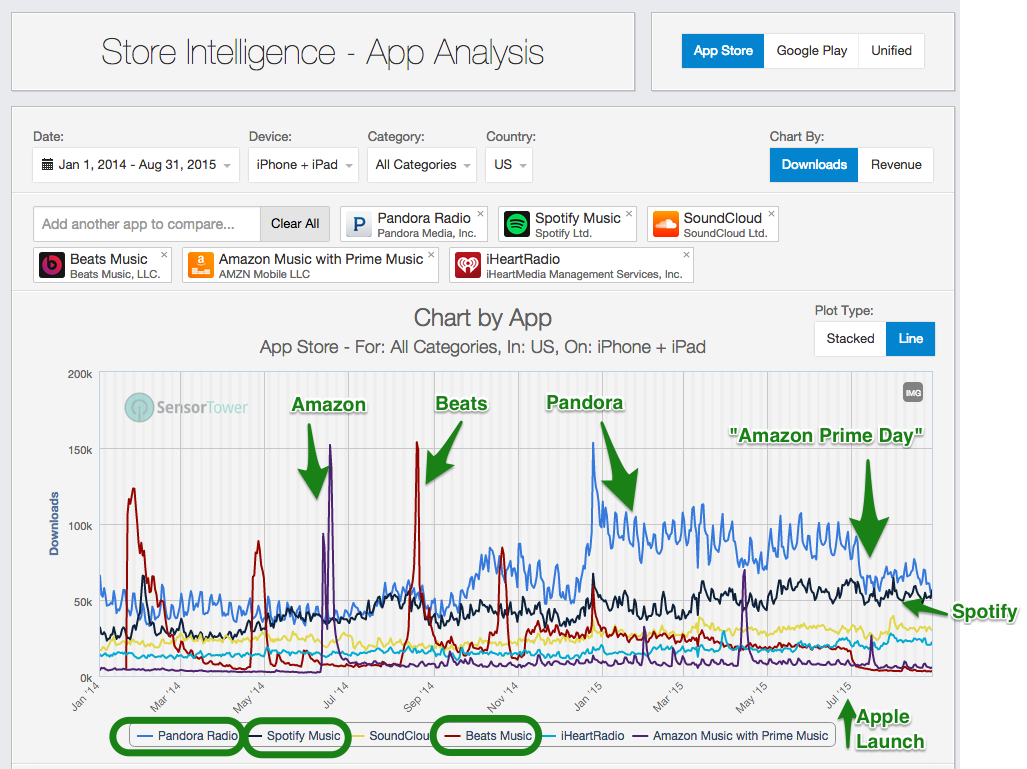 For the rest of the world, Apple’s impact can still be seen, though the only relevant players are clearly Spotify and SoundCloud, for the time being. Pandora barely registers outside of the US, and despite a one-time spike for Amazon in July – again likely a more global promotion event of some kind – Amazon is not surprisingly irrelevant on iOS. 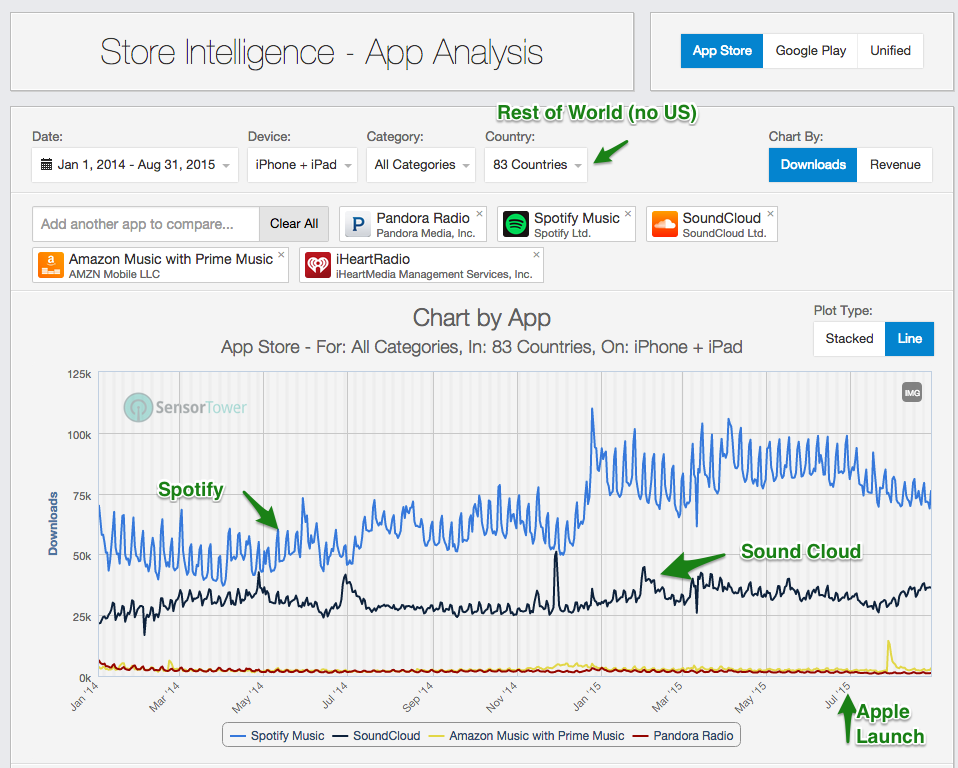 In our second tier we see more downward pressure from a global view, with the continual slide taking down all members of this second tier to below 5K downloads per day. The only exception being Guvera, which has improved its momentum outside of the US. It is worth noting that various services like Google Play and Rhapsody Music attempted promotions in the run-up to the June 30th launch of Apple's new service. The resulting increase in downloads is evident in their respective spikes, but their new momentum clearly did not sustain. 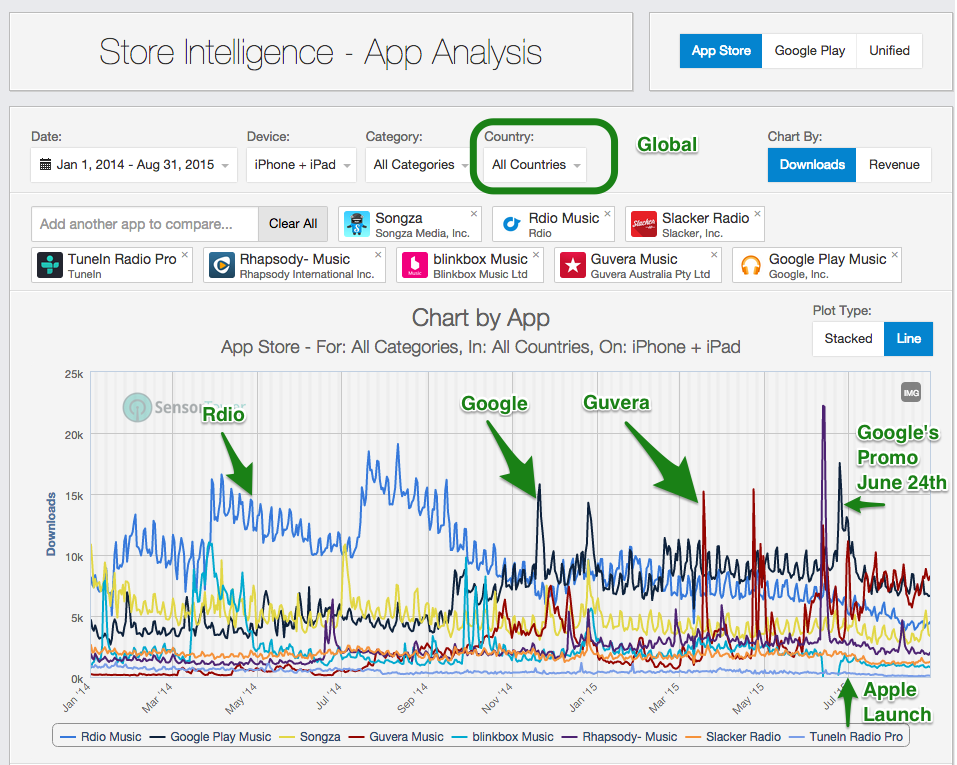 What's next for Apple? Google?

As expected, Apple's launch had certain impact in the US, and globally for lesser players in the streaming music and audio space. Spotify remains the strong counter to Apple's move with a more global reach and a clear will to compete on multiple platforms. Guvera will be interesting to watch - it has a long way to go to reach Spotify's momentum, but shows consistent growth and, if its trend continues, has a shot at playing a strong third, on the iOS platform at least.

But what about Google? In our next look, we'll drill into Google's "Play" on their own platform, especially once Apple deploy's their android-version of Apple Music. That's certainly when things will get more interesting. Check back in a few months to see how Round 3 shakes out.

Interested in learning more about how to get download and revenue estimates for mobile apps? Schedule a Store Intelligence demo with our team, and we'll show you how! 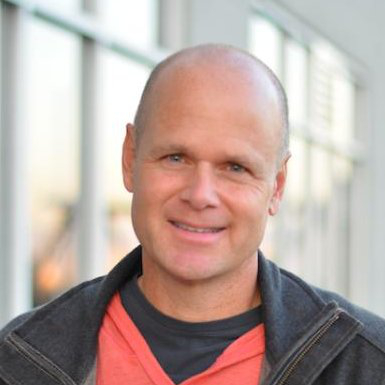