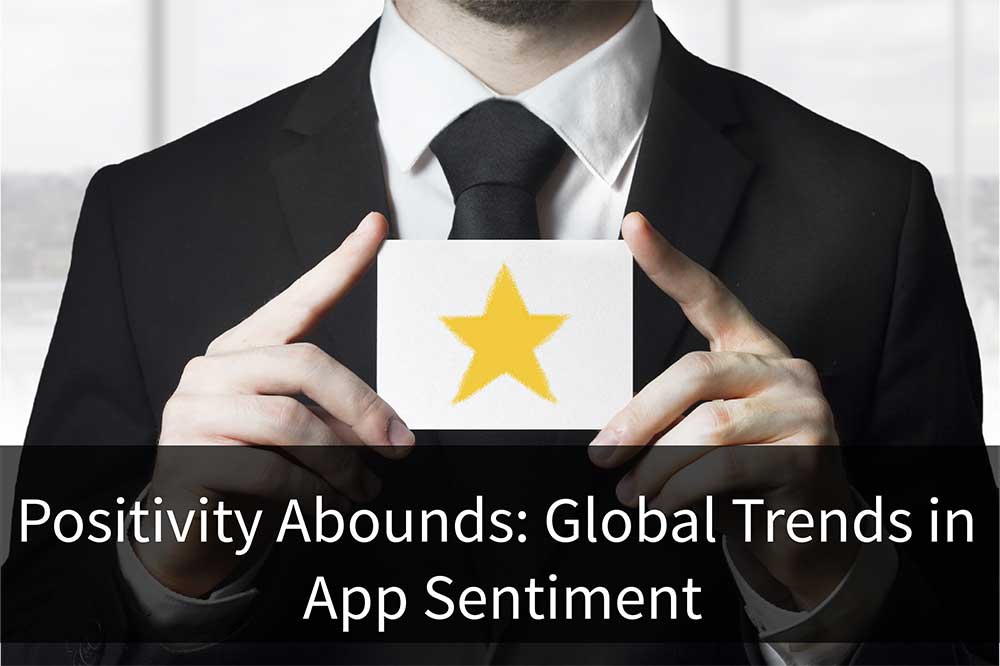 We already know that app users in varying markets have unique purchasing habits. So it's no surprise that sentiment has its own variations from country to country.

Let's take a look at which platforms and markets are growing more favorable in terms of app store ratings. This data will prove useful for your launch cycle!

In March, our team took a look at that month's rating averages for iOS and highlighted the overall sentiment in that market's landscape. But what larger trends have been emerging during the past years?

Sentiment for iOS vs. Android Users

First, let's look at ratings and reviews by platform:

A considerable increase has occurred in sheer number of reviews for Google Play apps. Between June of 2014 and May of this year, total number of monthly reviews has doubled from 10 to 20 million.

There are a few reasons this is occurring, not least of which is that the Android OS market share has been steadily climbing. We also discovered that it's much easier to leave an Android app review, which involves far fewer taps and data entry checkpoints than an iOS review.

User sentiment has also been increasing in the Google Play store as well. While iOS reviewers collectively average monthly ratings between 4 and 4.5, the monthly average for Android was below 4 in January of 2013. Over time, however, the Android average has continued creeping closer and closer to the same level of satisfaction seen in the App Store.

It's important to note that Google Play allows developers to respond directly to reviews. If you are seeing lower ratings for your Android app, consider responding to your critics and implementing their feedback as needed. Spending some time to respond signals quality and care, which can collectively help improve the overall sentiment.

A Close-Up on Star Counts

Let's look at the positive/negative split a bit closer:

The ratings split for iOS apps remains pretty steady, with positive reviews vastly overpowering negative reviews. For Android, the percentage gap between positive and negative reviews has grown, though. The green line continues to creep upwards past the 75% mark.

Ever wondered which market has the highest propensity to leave a review? 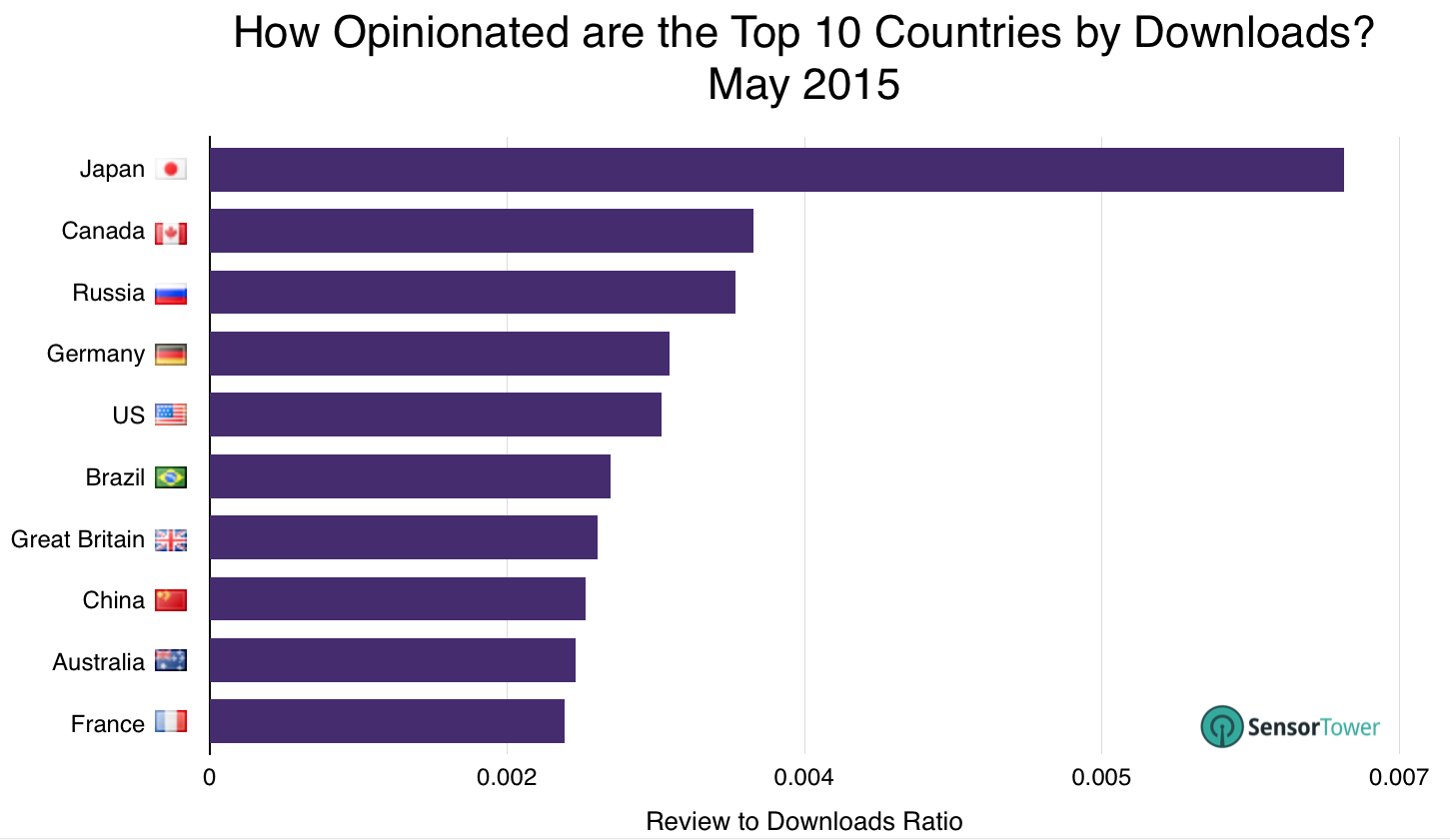 Earlier this month, we learned that Japan is the market where users are willing to spend the most money per download. Our data shows that Japanese app users take the mobile market seriously, as they are also much more likely to share their thoughts. 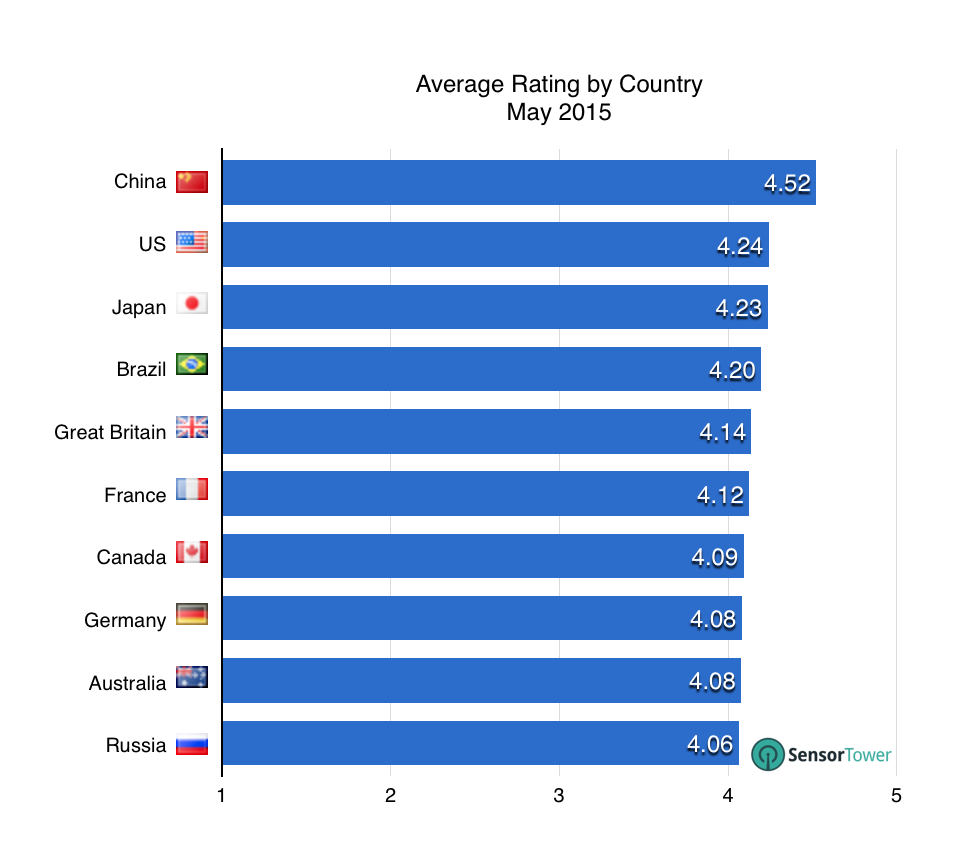 Though German iOS app users were the least satisfied market in March, their overall sentiment has been on the upswing. It's also interesting that Australia and Canada appear towards the bottom of the list. They've become very popular markets for soft launching new app versions, so it's no wonder that their overall satisfaction is lower. These markets often receive brand new, possibly buggy releases, while larger English-speaking markets like the U.S. and Great Britain receive later versions that have already been fine-tuned.

Finally, we've plotted average ratings for our most "mobile-opinionated" country (Japan) with Germany and Russia. In recent months, Russia's satisfaction has dipped below Germany's. This means there is great opportunity here for developers to strategize, and grow their user base.

Understanding overall trends in ratings for an app's platform and market can help developers better understand their existing rankings and how to improve them. First, developers should identify opportunities to increase satisfaction in a particular region. Then, next steps are to improve localization as needed, release bug fixes, and actively respond to user feedback (Android).

Sensor Tower has two tools to help with analysis of every app's reviews and ratings.

Have you experimented with implementing user feedback from your global reviews? Share your insights in the comments section below!