It is well known that free apps that have in-app purchases generally make more money than paid apps. But this model doesn't work for all apps. Charging up front for your app may be one of the only viable options for you.

So in this study, we wanted to look at what happens when you try to increase upfront revenue by increasing the price of an app. As you might expect, downloads decrease when you do this. But the revenue increases may surprise you because results vary greatly by country.

Keep in mind that these are median values and that they are broad generalizations. The results can vary significantly by category. We will dig more into specific categories and industries in future studies, but it is important to first establish a baseline across all apps.

How We Got The Data

We examined all iPhone apps that increased their upfront purchase price over the last 12 months, in the major App Store countries. There are a couple of countries that are noticeably missing, like Brazil.

Our study had to exclude them because there was not enough data to draw a statistically significant conclusion. We took a look at up-front (not including in-app purchases) revenue for a four month period before and after the change.

Since the exact dollar cost of foreign purchases fluctuates with currency rates, when refer to the $0.99 or $1.99 price points in the US, we are also generically talking about the corresponding first and second price tiers in other countries.

The Effect of Increasing the Price From Free to $0.99

First, let's take a look at what happens when we increase the price from free to the first paid price tier. As you might expect, downloads drop significantly across the board.

South Korea typically sees download drops of 97.4%, compared to 86.4% drops in Switzerland. This shows that you are usually better off creating a separate paid app instead of raising the price on your free app.

Of course, the result could be different when we look at specific categories. But again, we just want to get a baseline measurement across the board. 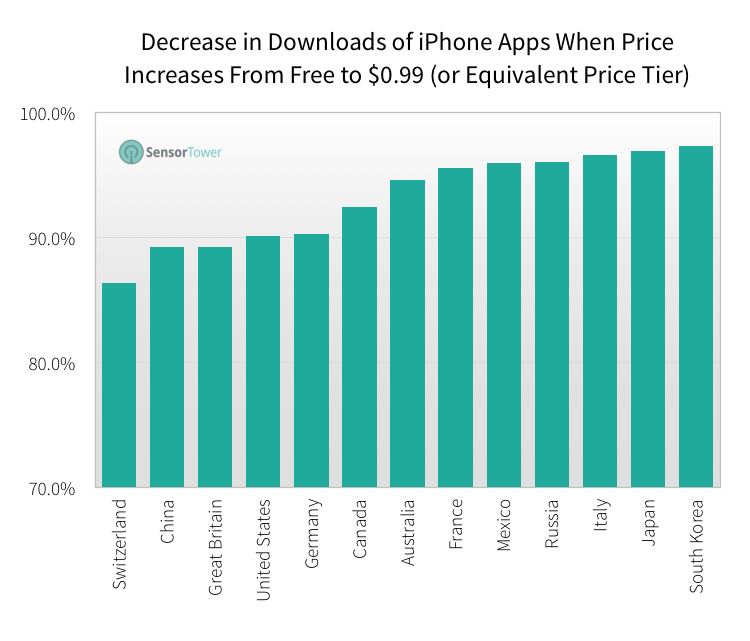 Now let's take a look at the effect of raising the price on apps that are already paid. Unlike going from free to paid, some countries are generally much more sensitive to a first to second tier price increase.

Japan is the country with the highest negative price sensitivity. Overall, there is a 55.6% decrease in downloads, leading to the only negative revenue change in the study.

On the other side of the graph, raising the price in Australia is actually a good thing. Although downloads decrease by 23%, revenue also increases by 54.8%. Apps in countries like Switzerland and South Korea also benefit from a price increase.

This is kind of surprising, since South Korea also has the highest aversion to a free to paid change. There is no way to know exactly why this is without doing an extensive survey. But I would guess that a price increase raises the perceived value of an app and therefore attracts people who are willing to pay a little more for a quality app.

So to boost revenue, you may want to raise the price of your app in Australia, but you might want to keep it the same in Japan. There may be cultural or economic reasons for this, but the bottom line is that you need to study each country individually. 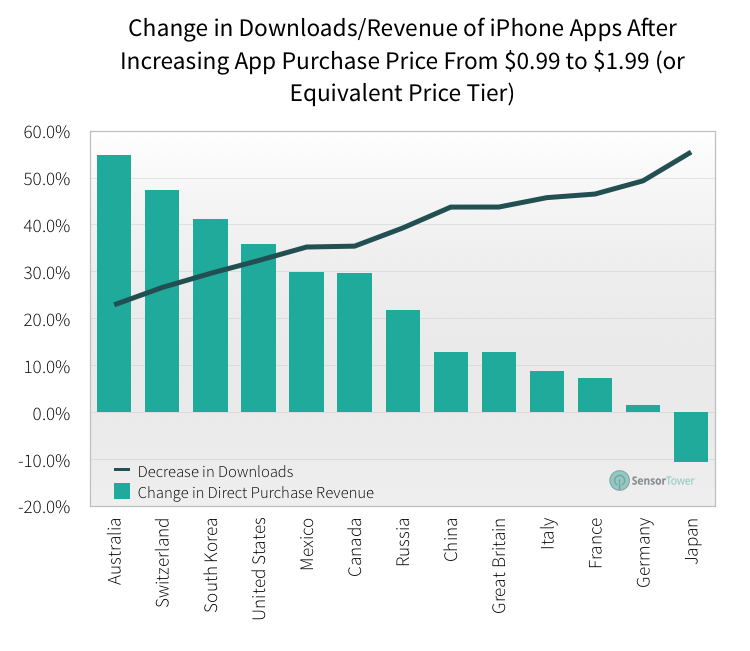 Again, the results of this study are just broad generalizations. But they are an excellent starting point for understanding how you should approach decisions like increasing your app's upfront purchase price.

We are also studying what happens to revenue when the price of an app goes from paid to free. If we find something worth mentioning, we will let you know.

This data comes from our Store Intelligence product. To learn how it can help you get the edge in your market, schedule a live demo today.

If you would like to see the same study for the iPad or Android? What other topics do you want us to research. Let us know in the comments below...