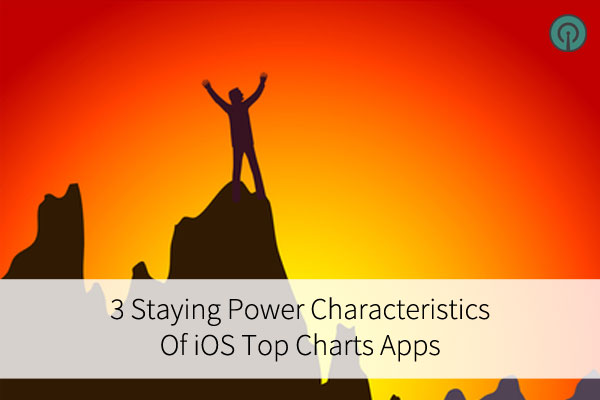 We get a lot of questions about how long iPhone apps stay on the Top Charts. So we decided to dig into the data and find out if we noticed any patterns.

This post will show you what we discovered and how you can use this information to position your app in such a way that will give it the best chance of success. Some of our findings were very unexpected.

How We Calculated The Data

Before we show you the results, let's take a quick look at how the data was calculated. We examined the apps in the top 10 and top 100 for all primary App Store categories. We didn't examine subcategories like Newsstand > Automotive.

For example, let's say that an app stayed in the top 10 for a 30 day period, then it dropped out of the top 10. It then returned a few days later and stayed for 60 days.

We would add both 30 days and 60 days to the average consecutive periods calculation for apps in the top 10. If these were the only two periods that we used for a calculation, it would show as an average of 45 days, on the graph.

We will first give you the three biggest takeaways that we learned from these results. We will also give our reasons as to why we believe the results are the way they are. Then we will provide the graphs below in the Results section, so you can see the complete data for yourself.

At first, this is counterintuitive. Since the top 100 grouping has ten times more positions, there should be a much greater chance of an app staying within the top 100.

But as we looked at our Store Intelligence data, things started to make sense. Let's take a closer look at why this happens. We will look at the Top Grossing Apps and Top Free Apps to illustrate our point.

2. Top Grossing Apps Are Much Harder To Dethrone Than Top Free Apps

Now contrast that with the Top Free charts where the average consecutive days is about 33 days for both the top 10 and the top 100. So why is there such a big difference?

But there was a bigger jump in estimated revenue between apps in the top 10 and just outside the top 10. Since both downloads and revenue factor into the Top Grossing chart, the revenue part of the equation was much harder to overcome.

Top apps that monetize well have a decided advantage over apps that don't. So if you can build a solid monetization strategy, you will be much more likely to stay on the Top Grossing chart.

Catalog apps consistently rank in the top two across all charts and groupings, except the top 100 on the Top Free chart. No other category had such consistent results.

As we looked through the Catalog category on iTunes, we noticed that Catalog apps are a nice mix of brand recognition and in-app purchase potential. This is what seems to lead to more consistent staying power.

People are loyal to brands and free apps from popular brands will get a lot of downloads. Catalogs also typically contain items for purchase and users expect that. Therefore, that is probably why in-app purchases do so well and Catalog apps are able to stay on the Top Grossing chart for so long.

So if you can position your app as a Catalog app, you may be able to take advantage of the beneficial characteristics of this category. Take a look at some of the catalog apps on the Top Charts and I think you will be surprised at the variety of apps that are in that category. It's not just for the Ikea catalog. 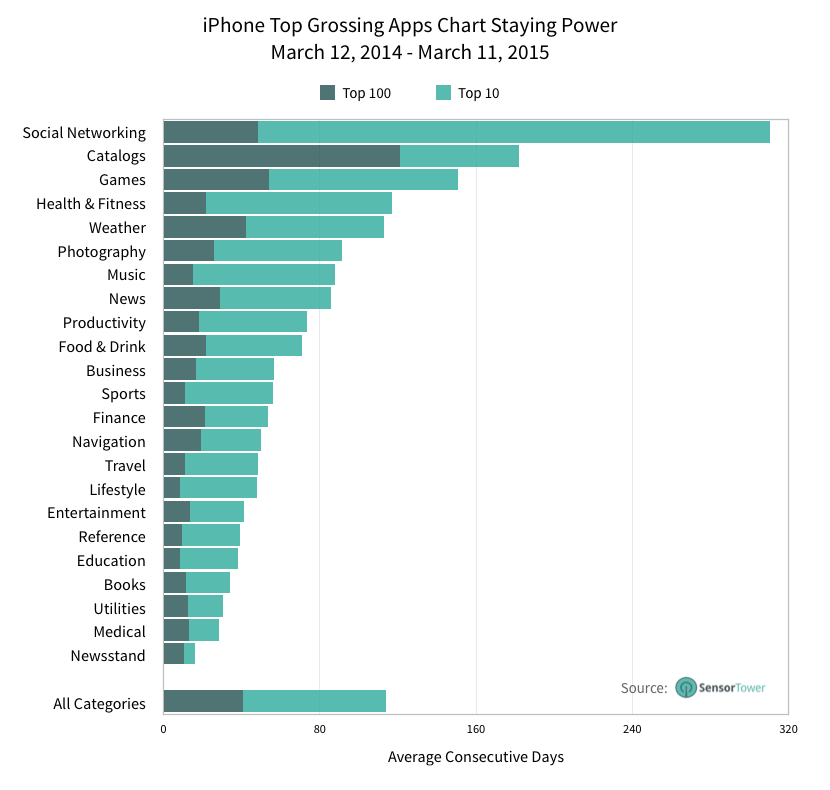 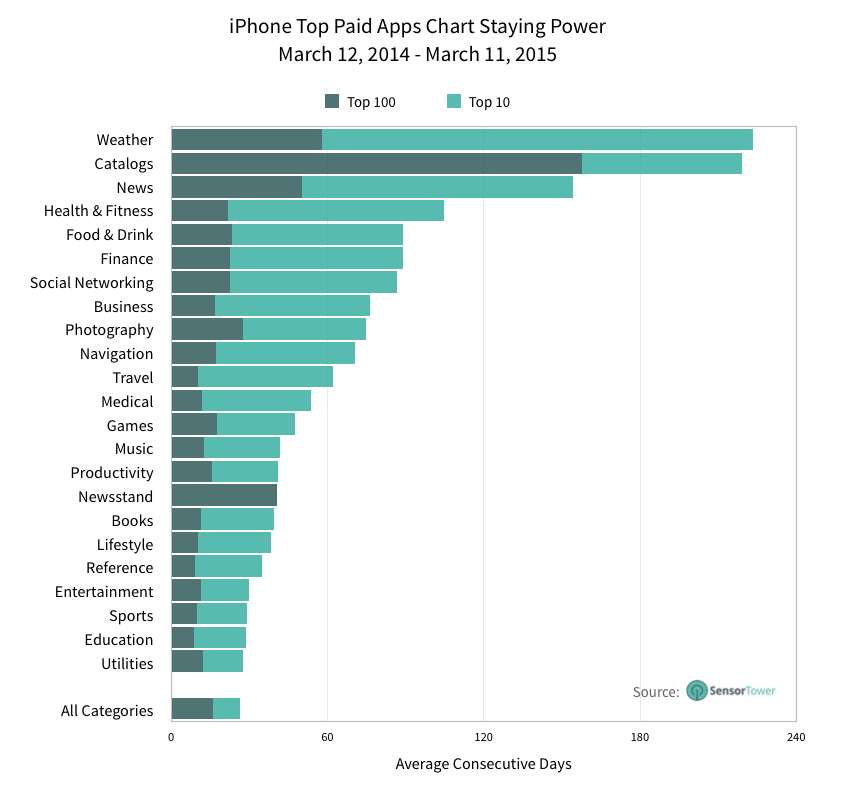 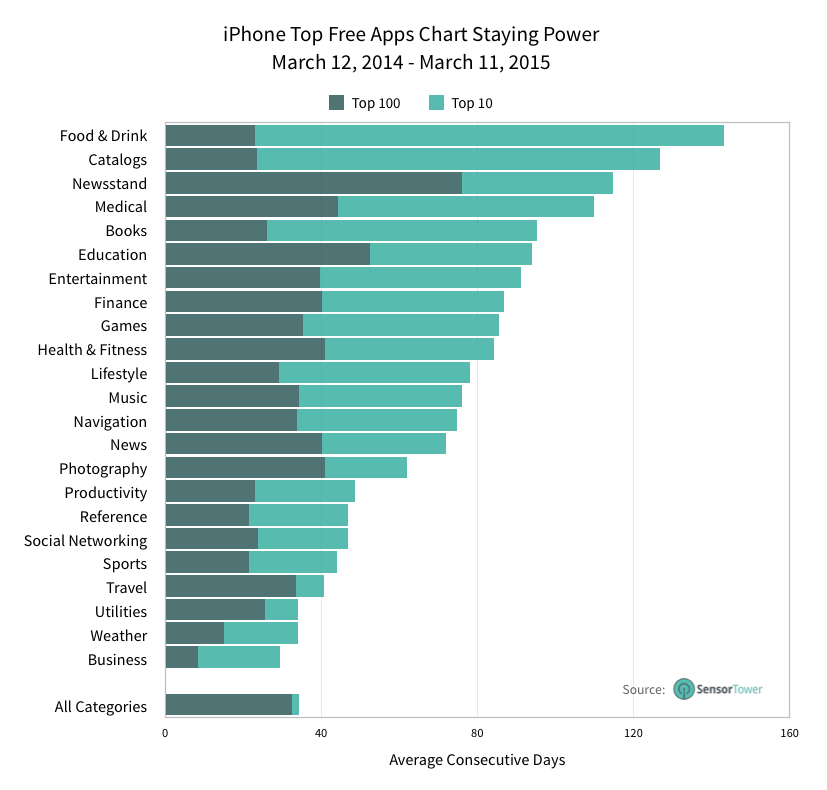 So those are the top three observations that we made about the staying power of Top Charts apps. We hope that you find the results interesting and that they answer some of your questions about how long apps are on the charts.

It really illustrates the point that you need to do your competitive analysis for the category you are listing your app in, in order to have the best chance of success. You can explore the iOS top charts here.

Do you have any more questions about staying power on the iOS Top Charts? What other data would you find useful? Let us know in the comments below...