As you probably know, we are fans of the App Store Optimization that Supercell does for Clash of Clans. Even their localization is excellent, as we mentioned in this post.

But most people didn't get a chance to follow the evolution of Clash of Clans from when it first came out, to now. What if you could go back to the beginning and witness the evolution of the mega game? There is so much that we could have learned from observing the process.

Fortunately, a similar opportunity has presented itself in their latest game, Boom Beach. Granted, they have learned a ton from Clash of Clans and Hay Day, so they don't have to do as much experimentation. But it is still very educational to be able to see how Supercell rolls out another one of their blockbusters.

Localization is an area where many app publishers don't focus as much attention and thus lose out on a lot of potential downloads. This post will show you the results of the Boom Beach localization for Japan. If you have any doubt as to the value of localization, you should continue reading.

Before we get started with analyzing the Japanese localization, let's take a quick look at how they launched the game. Supercell first did a soft launch in Canada and Australia in 2013. This allowed them to work out the last minute bugs before releasing it to the world. If you need to test an international corporate app or a large game, then this strategy could work well for you too.

From there, they set to work on translating it for other countries. This is what happened when they translated the game into Japanese.

We found out about the update by looking at our Update Timeline Page on the App Profile Page for Boom Beach. Our first clue was that they changed all of their screenshots from English to Japanese. 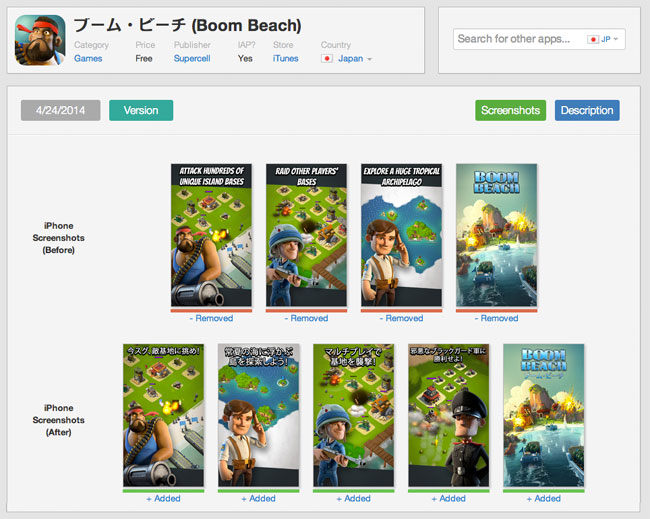 The screenshots were also accompanied by a description translation, as you can see by the description change icon, shown above on the Update Timeline Page. Also note that the update was done on April 24, 2014, almost one month ago.

Now let's take a look at the effect that this translation had on the rankings for Boom Beach. We are going to find out exactly how the change impacted their Top Charts rankings and how quickly it took effect.

On April 23rd, we would have had to do a lot of scrolling to find Boom Beach anywhere on the the Top Charts. On the Top Grossing iPhone Apps - All Categories chart for example, it was ranking #348 on April 22nd.

However, immediately after the update, the rank of this app rose sharply and is currently ranging between 60 and 70. This is a common trend that we saw across almost all of the other Top Charts.

If we look at it from an income perspective, this represents a large increase in revenue. By using the ranking on this chart alone, it could be estimated that the localization update helped to increase revenue by between 4X and 5X. This is a very rough estimate, but it does demonstrate the potential of localization.

In a similar fashion, localization lead to an increase in the number of reviews. The reviews of the game were already quite good before the update, but they increased noticeably afterwards. As you know, more reviews leads to better rankings, so this is yet another area where localization paid off.

One of the biggest Top Charts jumps that we saw was on the Free iPhone Games chart. A day after the update, Boom Beach jumped up 185 places to #41. That is how quickly an update can have an effect on the rankings of an app.

We hope that this example has shown you how translating your app can have a huge impact on improving your downloads, rankings and revenue. It is really powerful stuff. Others have also written about how localization has increased their downloads by over 7X.

So if your app can be used in other countries, you should take a serious look at expanding. Read some our previous posts on localization and find out how you can start small and work your way into more and more countries.

What has prevented you from localizing your app?