We have been hearing rumors that longer app reviews may be helping certain apps rank higher in app store search and on the Top Charts. In fact, we noticed that the Flappy Bird phenomenon exhibited reviews that were longer than average.

But there has not been any conclusive evidence to show that is the case. So we decided to do some digging to see if there is actually any merit to this speculation. We will look at the average review length of a few apps over time to see if we can find any correlation between review length and rankings.

If it turns out that longer reviews really are helping apps rank higher, then you can use this information to encourage your users to leave longer reviews. If not, then focusing on other areas is a better use of your time.

Before we get started, we have to preface this by saying that there are a lot of variables that can contribute to the rankings of an app.

A positive review on an influential blog, paid advertising and becoming an Editor's Choice app could all be reasons that an app might get a ton of downloads and move up the charts. On the shadier side of the fence, a publisher could also implement practices such as engineering fake downloads and reviews.

The point is that we can never know everything that an app is doing to move up charts. Therefore, we will simply try to correlate rankings to review length. Just to be clear, even if the reasons why an app has risen so quickly are not obvious, we are in no way suggesting that any of these apps are doing anything to game the system.

This is what we discovered...

Let's examine some apps that have made a meteoric rise to the top of the charts to see if there is any correlation between the length of their reviews and their success. Looking at newer apps will reduce the probability that existing factors are contributing to the success of the app. For example, quality apps that have been around for awhile will benefit from such things as an existing user base and more time to advertise.

As I write this post, Flappy Smash is one of the highest ranked Flappy Bird clones on the Top Charts. Although it has only been around since March 29 2014, it is currently #38 the overall Top Charts in the free category.

The number of ratings per day has been solid since the app has been launched.

But what about the length of each review? Here are the average number of characters per review for the two months since it was first published.

The rank of this app on the overall top free iPhone apps category is something that every app developer dreams of.

Due to the popularity and number of downloads of this app, the keyword rankings for this app are equally impressive. Here is the ranking history for the keyword "bird". Other keywords show a similar pattern.

But an average of 66.7 characters per review isn't a lot. In a previous study that we did of app reviews, one review had over 2,000 characters. Now that is a long review!

However, like we mentioned before, there may be other forces at work that are shooting this app to the top of the charts. So let's look at another app that has had immediate success.

Piano Tiles is another app that has risen to the top very quickly. It currently ranks #1 on the Top Charts for free iPhone apps.

The average character counts for the reviews of this app are as follows:

In this case, the average number of characters per review more than doubled. But just like the previous example, even 200 characters isn't that long of a review. Regardless of the reason that this game took off, it doesn't appear that long reviews was one of the reasons.

Just to compare the rankings history with Flappy Smash, here is the rank of Piano Tiles on the overall Top Charts.

One thing that we thought was impressive was that this app is ranking very well for the keyword "game", a very competitive keyword. 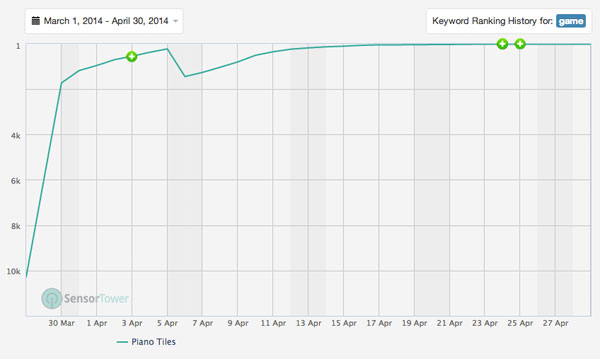 One could speculate that the percentage change in the length of the reviews could be a positive contributing factor. This is a good idea, but the rank for the keyword "game" was already rising in March, so the increase could not have been an influence on the rank.

Now let's take a look at an app that is still fairly new, but has been around a little longer than the other two. Just so we don't leave paid apps out of the picture, here is the top paid app. A Dark Room was first published on November 8, 2013.

During the time that this app has been available on the App Store, the average length of its reviews has been the following.

The average number of characters per review was pretty much the same in both months and the count wasn't that high.

But hasn't this app been around for longer? Yes, but its first review was actually in March.

So as you can see, neither the average number of characters per review, nor the trend of the average length could have contributed to the rise of the app. The number of reviews and the star ratings probably had a bigger influence.

Here is the graph of the rank of the app on the paid charts. As you can see, the rankings really start to take off when the app started to get more high ratings and reviews.

Do Longer Reviews Help In Another Way?

There is another possible benefit to long reviews. Does the App Store give these reviews preferential treatment when displaying them in iTunes?

If these longer reviews do float to the top by default, this could be another way that they could help an app. Let's look at the reviews of a couple of these apps on iTunes.

Here is another example from the Flappy Smash game. This review is 716 characters long, putting it near the top of the most helpful reviews list.

Although these have only been a few examples, they are good representations of what we have seen across the board when looking at other highly ranked apps. So longer reviews do not appear to help apps rank higher in keyword search or on the Top Charts. But they do help when people are browsing your app on iTunes. Therefore, if you can encourage your users to leave a longer review, it could help you in iTunes, but it should not be treated as a high priority.

Do you agree or disagree? If you disagree, what are some examples of apps that seem to be ranking because of review length?