It is no surprise that the apps on the US Top Grossing charts for iPhone and iPad make the most money worldwide. But how much of the total estimated App Store revenue do they account for? In this post, we will take a look at the results for each device.

How We Got The Data

We examined our revenue estimates for the top 100 apps on the US Overall Top Grossing Charts for both iPhone and iPad. Then we divided the top 100 into groups of 10 to get an idea of how much revenue decreases as you move down the chart.

This is what we discovered...

This probably doesn't come as a surprise to you, but iPhone apps are much more competitive worldwide. The top 10 iPhone apps on the Top Grossing Chart only account for 18.1% of global revenue.

What may be a surprise is that there is a huge drop off once you hit position #11. Apps that rank #11 through #20 only account for 4.2% of total App Store revenue for the iPhone. The top 100 apps account for a grand total of 31.5% of worldwide iPhone revenue. 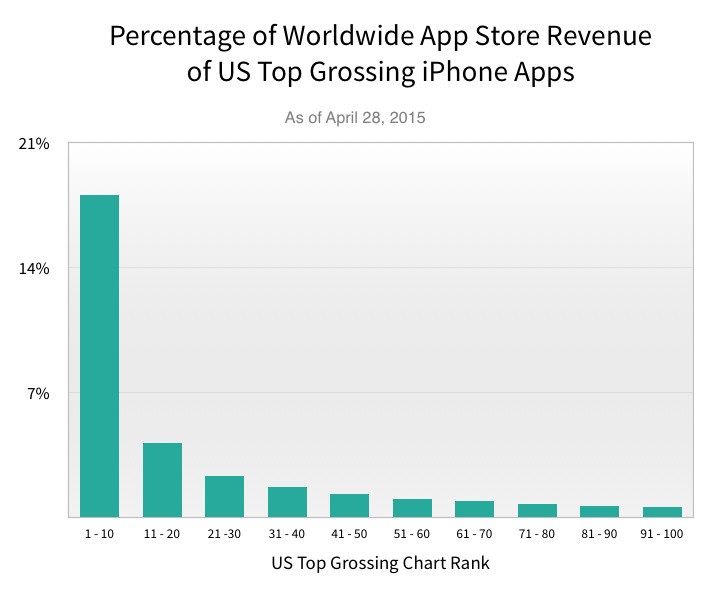 iPad apps are less competitive and the top 10 apps account for 22.4% of total revenue. We also see a steep drop off once you hit chart positions #11 through #20.

Similarly, the top 100 apps account for 38.7% of total iPad revenue worldwide. This makes the iPad look more appealing from a competition standpoint. 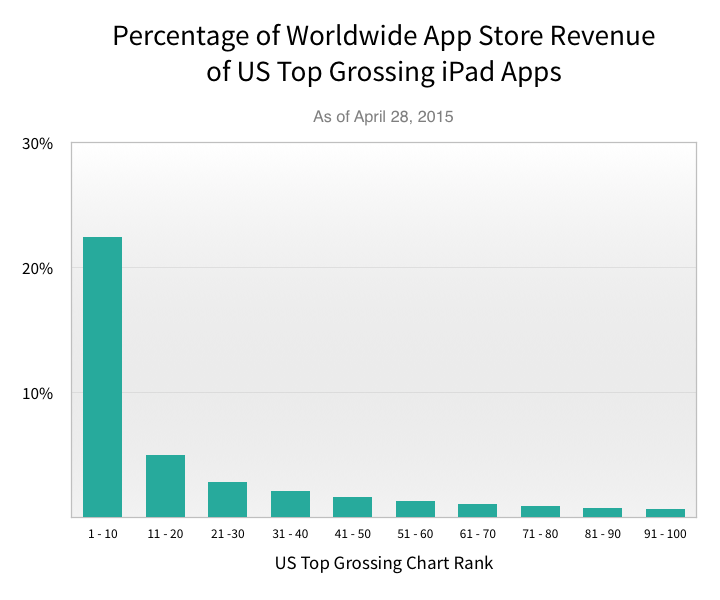 By looking at the results above, you may think that top apps have a slight edge if they create iPad apps. Let's compare apples to apples and take a look at the ratio of revenue between the two devices.

Our data shows that iPhone apps are actually generate more revenue than their iPad Top Grossing counterparts. What is interesting is that the top apps have a much more balanced revenue ratio, compared to the rest of the App Store.

iPhone apps generate about 20% more revenue, when looking at the top 100 grossing apps. The difference becomes much greater when we look at the rest of the app store. In this study, we see a 70% difference.

So if you are going to choose a device to target first, you should start with the iPhone. It might be more competitive, but it tends to generate more money. 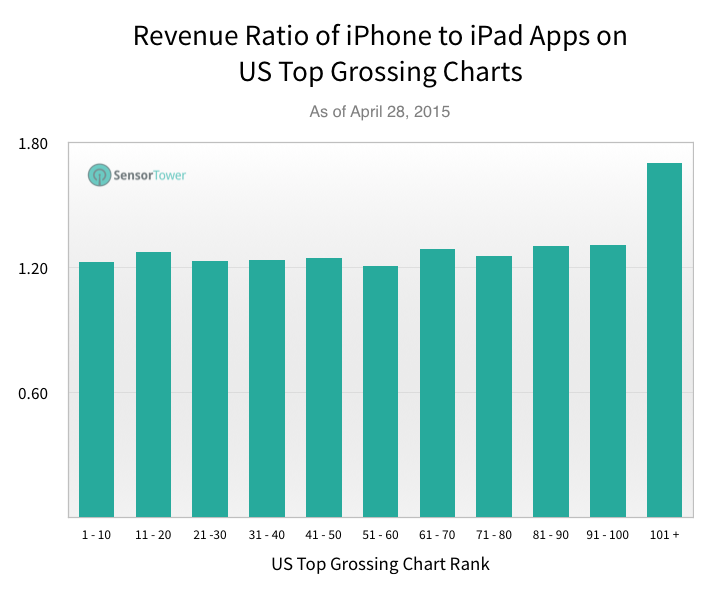 Keep in mind that we are examining the biggest apps in the world and we realize that your app probably doesn't fall into this category. In future blog posts, we will dig into specific categories to find out what the top apps are doing and how you can apply their strategies to your apps.

But we do studies like this to give you a 10,000 foot look at the App Store. It is useful to understand the big picture, in order to get a feel for where your apps fit in.

Once you understand that, you can pick the strategy that is right for your current situation.

These data estimates come from our Store Intelligence product. Get the estimated downloads and revenue of your competition in an easy-to-read dashboard. You can schedule an Enterprise demo here.

What other types of App Store data do you want to see? Let us know in the comments below...