From Netflix to HBO to Apple Music, streaming services have been banking on exclusive content to give them the edge over their competition and drive user acquisition. They've all seen some success so far, but nothing like what fledgling music app Tidal just experienced thanks to one person: Kanye West.

With yesterday's release of the hip hop star's latest album exclusively through the service (for what he's said will be period of one week before it's widely available), Tidal's downloads on the U.S. App Store have skyrocketed, sending the app to No. 1 on the free apps chart for all categories and setting the mobile marketing world abuzz.

Sensor Tower has the first data on the app's meteoric rise, and in the following Sensor Log post we'll show you exactly what it looked like on the App Store when Kanye's album dropped.

To create the following charts, we utilized U.S. App Store analytics from our Store Intelligence platform, which provides industry-leading accuracy in its download and revenue estimates. Note that the charts are for the United States only and include iPhone plus iPad download estimates.

In our first chart, you can see Tidal's category rankings (for free apps in all categories) from January through the release of Kayne's latest album, "The Life of Pablo". We've annotated spikes in its rankings to indicate the major exclusives associated with them: 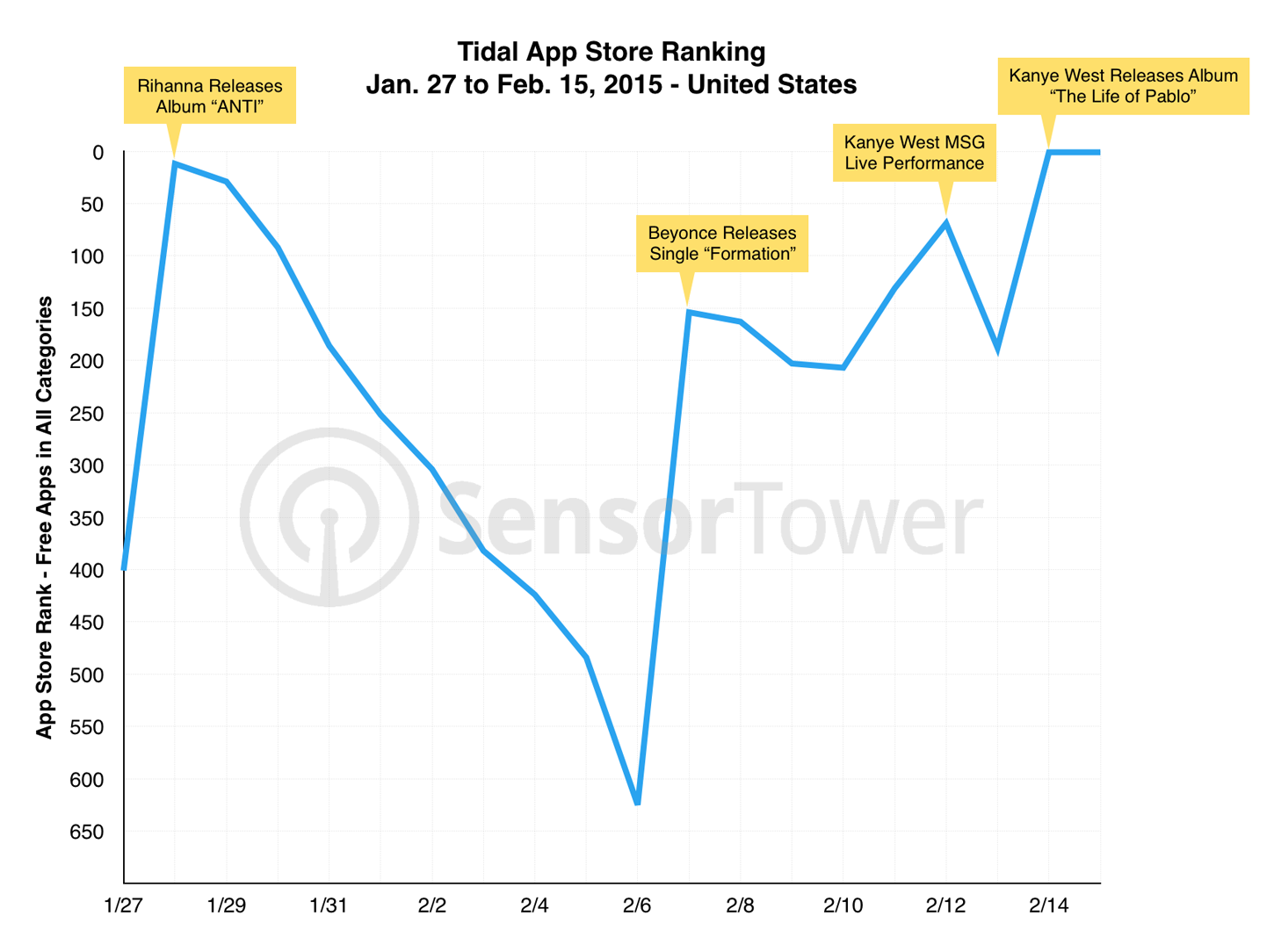 It's worth noting that the release of Rihanna's album "ANTI" last last month helped drive Tidal into the top 20 free apps in all categories briefly, and the single "Formation" from Beyonce sent it soaring from below 600 to nearly 150 on the charts earlier this month. Given the exclusivity window for Kanye's album, we wouldn't be surprised to see Tidal's No. 1 position hold for considerably longer.

The Influence of One Album

In the next chart, we looked at Tidal's hour-by-hour category ranking (again, for free apps in all categories for the U.S.) from Thursday afternoon, February 11, through Monday morning, February 15. By doing this, we can see the exact point at which Kanye's album was released on the service, and the corresponding jump in downloads (which, in turn, translated into a shot up the free apps chart): 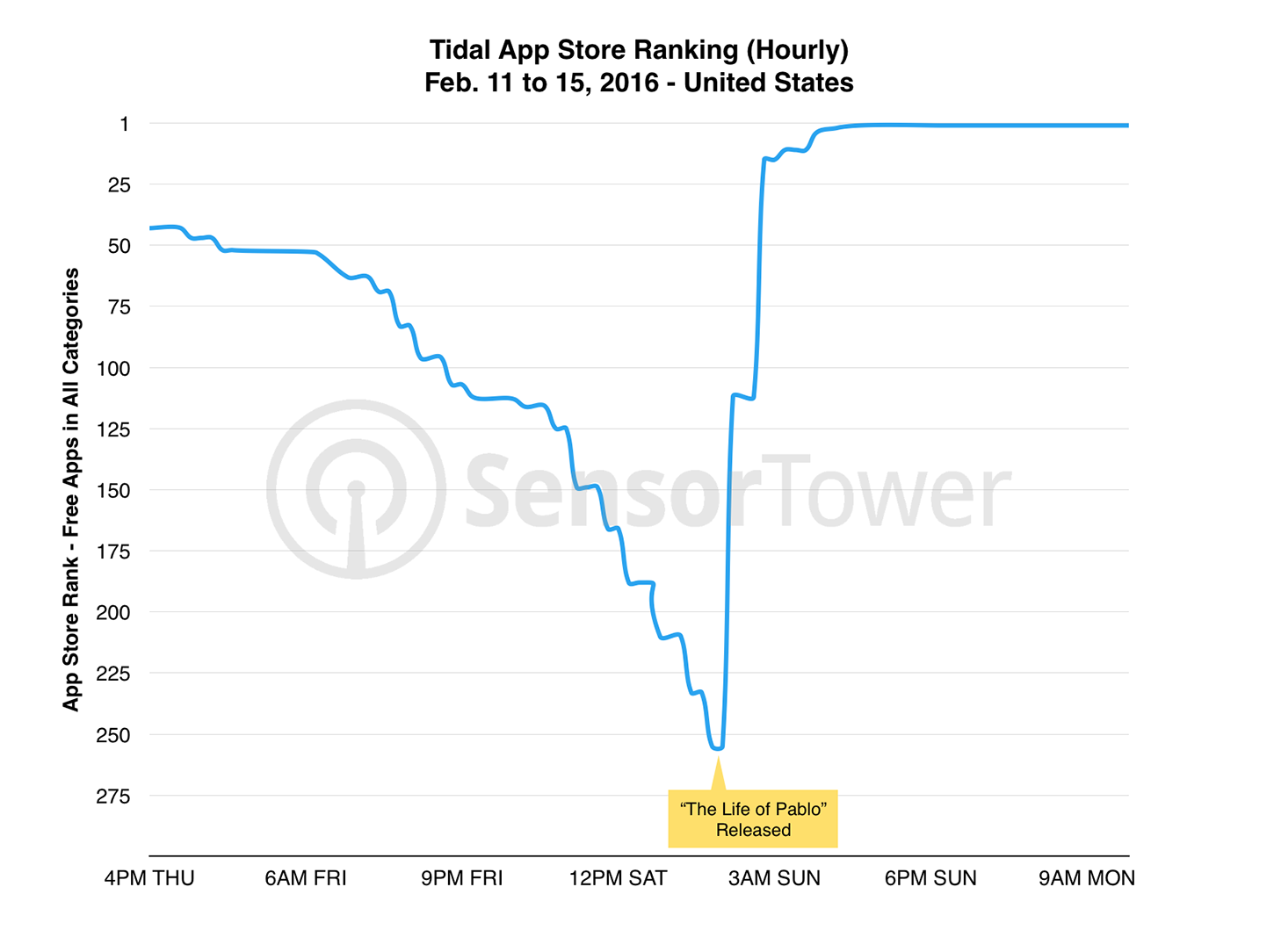 Top of the Charts—But for How Long?

Finally, we have a chart visualizing daily download estimates for Tidal versus Spotify in the U.S. In it, you can see that, riding the massive surge in new downloads spurred by Kanye's album, Tidal actually managed to surpass Spotify on Saturday, February 13—by approximately 2,000 downloads: 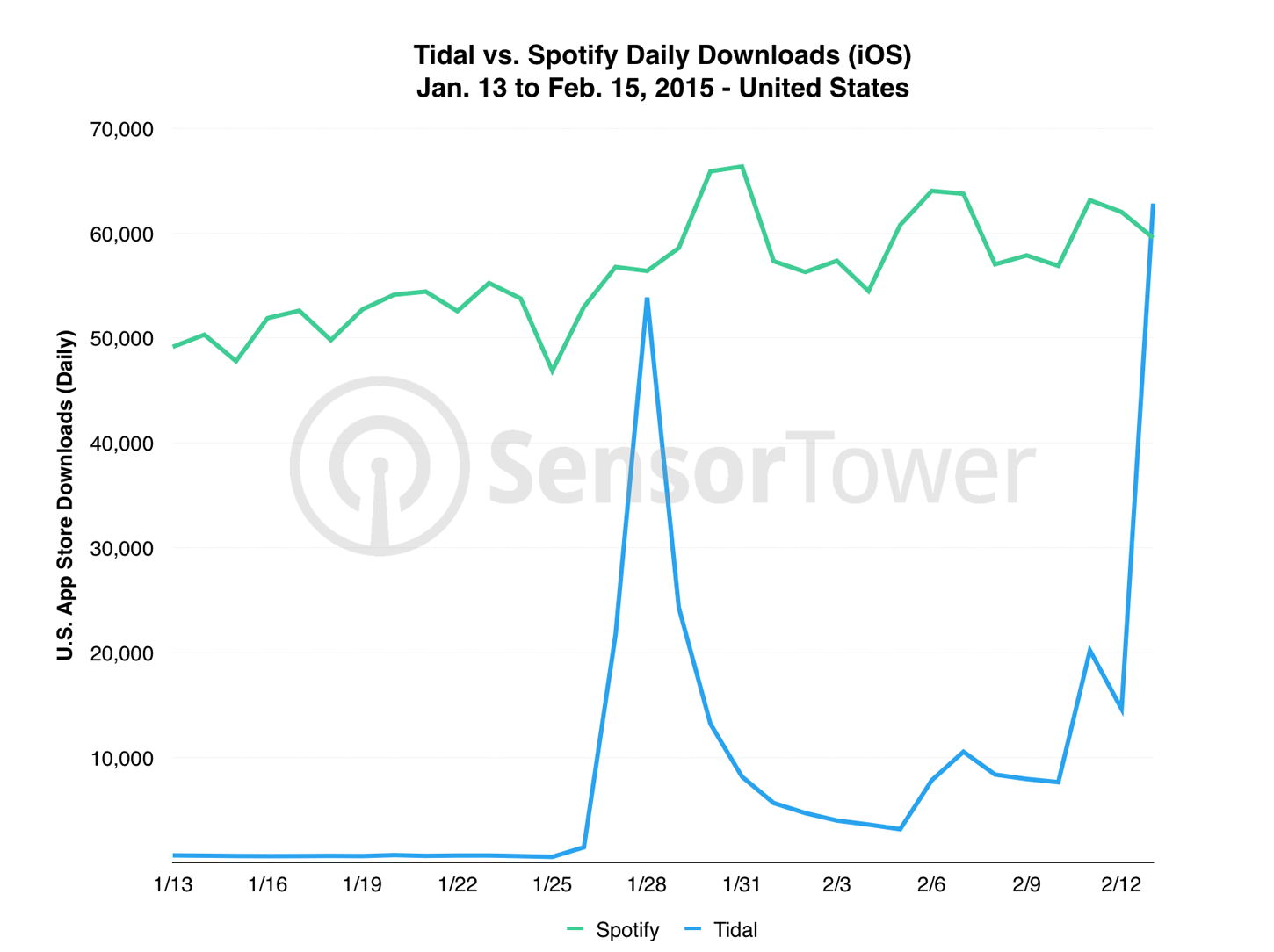 This is unquestionably impressive, especially for an app that last month was only seeing a couple thousand downloads per day. There is a real question, however, as to how long Tidal can sustain the "Kayne Bump", as it were. We expect to get at least a partial answer to that in a week's time when "The Life of Pablo" is expected to become available through other services and retailers.