TikTok was downloaded by close to 113 million App Store and Google Play users worldwide in February, making it the app’s best month ever for both installs and revenue according to Sensor Tower Store Intelligence estimates.

ByteDance’s social video platform was the most downloaded non-game app worldwide last month, outperforming the likes of WhatsApp and Facebook, with installs up approximately 96 percent year-over-year from February 2019.

India continued to be TikTok’s biggest driver of downloads last month, accounting for 46.6 million installs, or 41.3 percent of installs worldwide. Brazil was second largest with 9.7 million downloads, while the United States rounded out the top three with 6.4 million installs.

While the number of downloads in India grew 64.8 percent Y/Y from 28.3 million in February 2019, its share of installs dropped nearly eight percentage points from 49.2 percent of the total. This suggests that, while India remains a key market for TikTok, the app’s popularity is expanding around the world. The fastest growing market Y/Y was Brazil, with downloads up 992.6 percent from February 2019. This increased the country’s share of downloads from 1.5 percent to 8.6 percent last month. 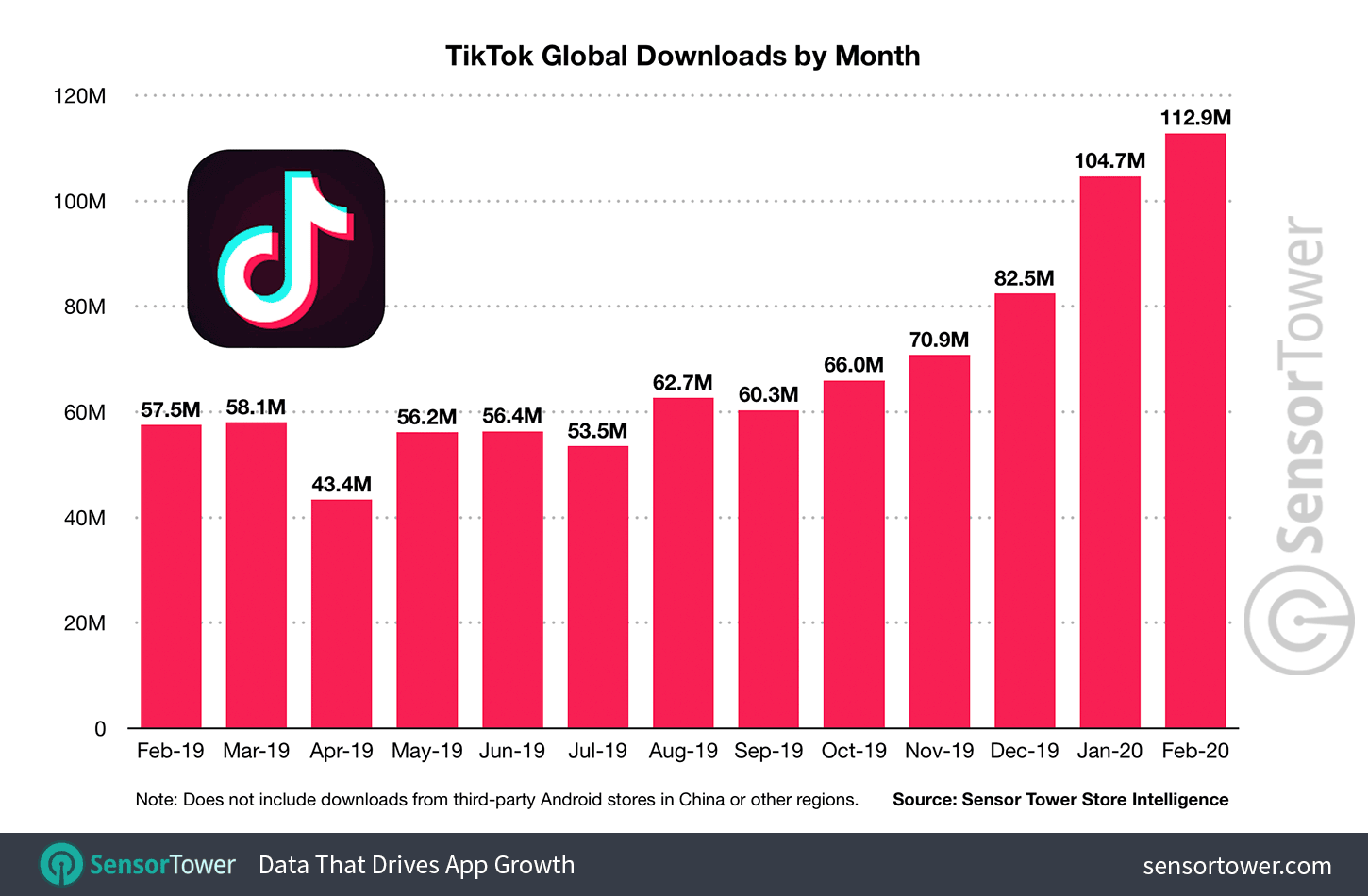 TikTok’s explosive growth from December 2019 to January 2020 is not exclusive to just a few countries. India and Brazil were the fastest risers, with downloads increasing by 5.7 million and 3 million downloads month-over-month, respectively. But a look at the larger picture shows that downloads increased in countries across the globe, with the cumulative effect resulting in a significant rise.

Google Play still accounts for the majority of TikTok’s downloads, amassing 93.2 million installs in February 2020, or an overwhelming 82.5 percent of the total. The App Store, meanwhile, generated 19.7 million downloads, or 17.5 percent of the total. To date, TikTok has accumulated close to 1.9 billion lifetime installs across both platforms, but not including third-party Android storefronts in China and elsewhere.

TikTok also saw its highest-ever monthly user spending in February, with the $50.4 million it generated equalling a 784.2 percent Y/Y increase. This made it the third highest-grossing non-game app worldwide for the month behind Tinder and YouTube.

China—where TikTok is known as Douyin—was responsible for the majority of this spending with nearly $46 million, or 91 percent of all revenue for the month. The U.S. ranked No. 2 with $3 million, while Great Britain came in third, with $216,000. 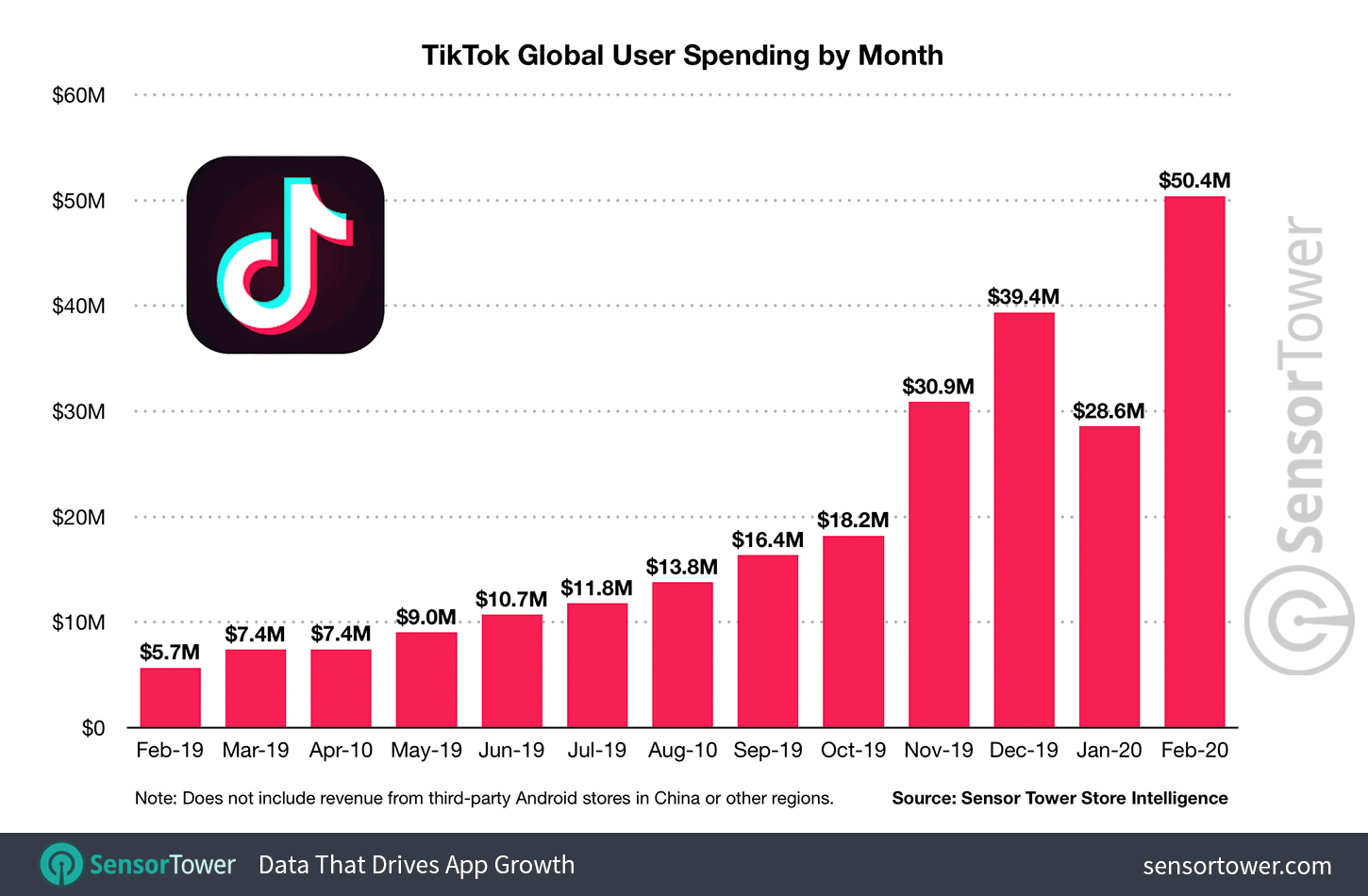 Due to TikTok’s revenue concentration in China, App Store users accounted for $49.6 million, or 98.4 percent of the app’s total revenue. Google Play users, meanwhile, spent just $871,000 globally. TikTok has garnered more than $330 million in lifetime user spending so far, with February alone accounting for 15.3 percent of that figure.

The app’s lucrative February followed a month-on-month decline from December to January, which occurred as users in China were busy preparing for Chinese New Year. The subsequent surge in revenue then coincided with the New Year itself, along with the coronavirus outbreak there, which saw a number of cities put under quarantine in China.

An Uptick in Downloads

TikTok is continuing where it left off last year, having generated a significant number of its all-time downloads in 2019. It was the most downloaded non-game app in both January and February 2020, amassing more installs during those two months than even WhatsApp, which was 2019’s most downloaded app.

ByteDance is showing that it has what’s necessary to compete with other stalwarts on the charts—namely a sizable UA budget—while also being able to generate increasing sums of revenue from user spending, via TikTok Coins that can be used for gifts for others, not only through advertising like its competitors. ByteDance’s ability to find multiple, lucrative revenue streams for its app, while attracting and engaging a young audience that many of its rivals court, has proven to be a winning combination thus far.