Screenshots are not the most important element of App Store Optimization, but they can be the final deciding factor when someone is figuring out if they should download your app, or your competitor's app. This is usually an emotional decision, so your screenshots, especially your first screenshot, has to resonate with and educate a potential user.

But what is the best way to design your screenshots? A good place to start is to see what the top apps in your category are doing. Not all of the screenshots in the top 10 will be good examples, but by looking at an overview of all of them, you will be able to quickly see what is probably having a positive effect on downloads and what is having a neutral or even negative effect.

If you are in the Health & Fitness Category on the App Store, then you are in luck. We will be analyzing the screenshots of the top 10 apps on our Leaderboard in that category, to see what are good examples of screenshots and which ones are just average.

But even if you are in another category, this analysis can still be applied to your category to help you get screenshot ideas. Be sure to stick around until the end because we will show you how to test the ideas you discover through this process.

The screenshots are listed in order, with the first screenshot being on the far left. That is the screenshot that appears in App Store search results.

This set of screenshots is arguably the best of the bunch. The reason is that the benefits of the app are clearly spelled out at the top of each screenshot and there is strong branding with the dark blue background. In addition, the text is easy to read and the smaller text at the bottom of each screenshot further clarifies the headline, giving people even more reason to download the app.

The screenshots in RunKeeper are a little busy, but they do insert a ribbon in the middle of each screenshot that clarifies the benefits of the app. This helps people immediately understand how the app will help them. Overall, their screenshots are well done and highlights the major benefits to the user, not just features. 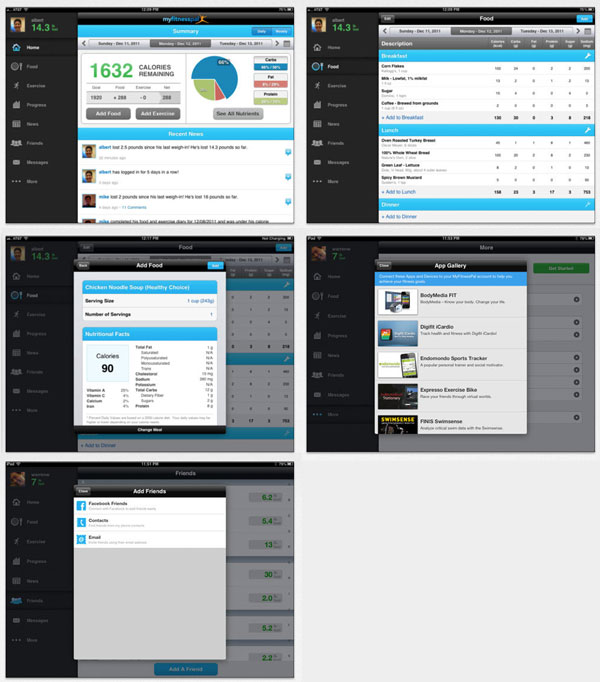 This is the iPad version of the popular app, so we had to make the screenshot examples larger so you could see them. The first screenshot is in the upper left corner.

The screenshots in Calorie Counter are directly from the app, with no modifications. As you can see, it is really difficult to understand what the app does. The screens could also possibly be trimmed to eliminate the unnecessary black sidebars. Overall, this is probably the worst set of screenshots in the top 10.

The Lose It! app also only uses screenshots, with no modifications. Their screens are pretty busy and would benefit from additional text to clarify how it can help people lose weight. On the bright side, it does give people a good look at all the little things that they can track and would probably appeal to people who like more technical apps.

This GPS running tracker gives the primary benefit of the app on the first screenshot with a nice iPhone picture, then shows off the other features in the subsequent screenshots. Luckily, the app is pretty user friendly, making the screens easy decipher.

The Nike+ app screenshots lack explanation text, but the UI is also very easy to understand, so they can get away with it. They highlight the challenge aspect of the app in the first two screenshots.

This is another case of an app that just uses screenshots straight out of the app. The first screenshot is not bad, even though there is no text explaining the benefits. It shows you that the app is primarily for tracking and and shows you what you can track. However, compared to some of the screenshots from other apps, there is room for improvement.

Screenshots from the Sleep Cycle alarm clock is another great example of how simple text at the top of the screenshot can go a long way to helping potential users understand what the app does. Even though the app interface is simple, the text and picturing the entire iPhone on a bed adds an extra level of character and branding to the screenshots.

The Lumosity Mobile app does a good job of mixing text explanations, iPhone photos and full-screen screenshots. The color scheme is fun and eye catching. Also notice that the first screenshot mentions the biggest benefit of the app.

Even though this app has the highest Estimated App Worth in the Health & Fitness Category, the screenshots are very ordinary. Just like with their iPad app and the Lose It! app, the screens are busy and hard to decipher without close examination.

They all use the five allowed screenshot slots and all have examples of screenshots from the app. This is par for the course and should be in every single app. But that is where the similarities end.

Also, the screenshots that show a picture of an actual iPhone also seem to be more interesting, but that could be a matter of personal opinion. The apps with screenshots that have better branding and color schemes like Lumosity Mobile, Relax Melodies and Sleep Cycle are more eye catching and more likely to be noticed.

So that is a quick look at the top apps in the Health and Fitness Category and how they are using screenshots to attract potential users. Examining what the most successful apps are doing is usually a good indication of what is working in a category, but it should not be considered as the only way to create screenshots.

Whatever you discover through this process is just a starting point, you will still have to test your ideas. Also be willing to test something totally different, to stand out from the crowd. There are two ways that you can test your screenshots.

The first way was explained in a previous post. If you have not read it yet, take a minute to check it out. This method will give you exact numbers as to which of your screenshot ideas is best.

But if you do not want to go through that process, then the second way is not as conclusive, but can give you an idea of what works. When you want to test a screenshot, do an update where the only change is the screenshots.

This is not always possible because there are usually other bug fixes and feature updates that you want to implement. But if you have the luxury of only testing screenshots, then this will be the best indication that the screenshots were the cause of the increase or decrease in downloads, because they were the only things that changed.

Finally, if you have not optimized your App Store keywords yet, then that is a better place to start because it will have a much bigger impact on your downloads than optimizing screenshots. Read through our free guide on how to choose, track and optimize your keywords. However, if your keywords are under control, then improving your screenshots can help you convert more people who find you through search, from browsers to users.

Which screenshot designs work best for you? Let us know in the comments below.